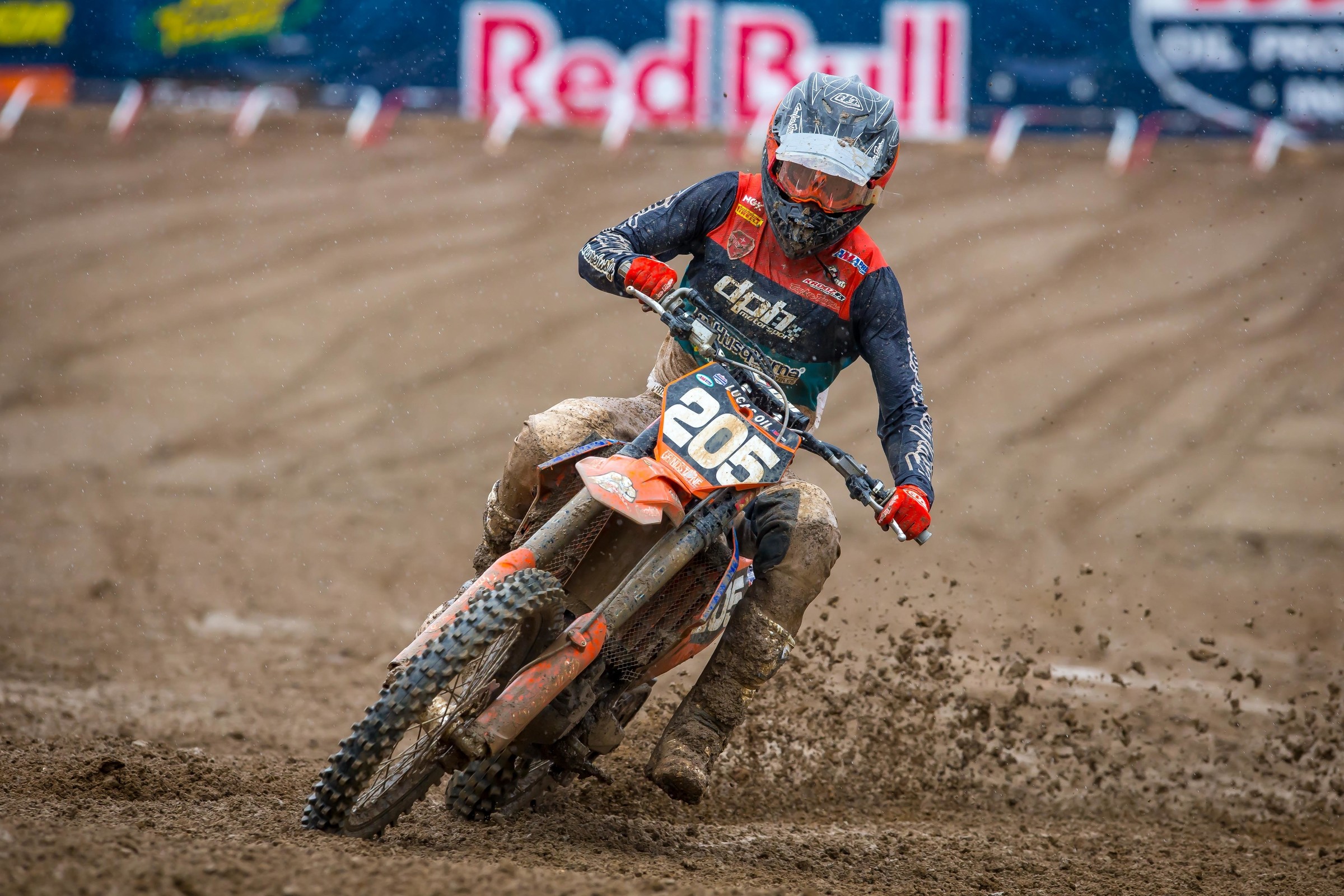 Wilson Todd is the defending Australian MX2 champion and is currently the points leader in the class. With that series having a couple of weeks off, Todd decided that now was a perfect time to spend two weeks in the U.S. contesting in the first two rounds of the Lucas Oil AMA Pro Motocross Championship. A champion in his homeland of Australia, Wilson rolled into Hangtown pitting out of a van, riding a borrowed motorcycle with suspension that’s way too soft for tracks in the United States, but he was ready to show anyone watching what he is made of.

We caught up with him earlier this week to chat about his first race in the United States, and to learn a little bit more about him. Then, our Steve Matthes broke news yesterday that Todd will get a fill-in deal with Troy Lee Designs/Red Bull KTM, replacing the injured Mitchell Falk. So Todd will be sticking around for at least a few weeks, and with upgraded equipment than what he had at Hangtown.

Racer X: Hey, Wilson! Racer X here. What are you up to today?
Wilson Todd: Hey mate, just got done having a ride out at Perris this morning. Currently heading back to the Grindstone compound to get ready for a little training this afternoon!

Awesome. You’re pretty new to the U.S., right? Tell the people reading this a little about you.
Yep, the scene over here is brand new to me. I came over last year to watch Oakland and San Diego supercrosses. I’m the current Australian MX2 champion and currently leading the series so far this year again. We are halfway through our outdoor season and have a few weeks off, my main goal has always been to be the best and race on the biggest scene, so two weeks before Hangtown I started to put a plan together to come over and show some of these teams that I have some potential. Ben Griffith contacted me and offered some help to be my mechanic, I decided to come stay at a compound in SoCal called Grindstone, they offer a place to stay, all nutrition, training, and riding so it was perfect for myself, since I haven’t been to the area before.

Hangtown went pretty well for you, 12th overall in your first ever U.S. Pro Motocross National—are you happy with that?
Yeah, I’m super happy with the results! I had a goal of top 15 and to try be in front of some of those factory bikes, I was over the moon to get a ninth in the second moto but a little bummed I threw away a better finish crashing twice! Sixth in qualifying was pretty cool too. I know I have great sprint speed, so it is a sign I can build my racing up to that level.

Talk a little bit about the difference in Australia versus here. For instance, does being a champion there but just another guy here add pressure on yourself? Or does that actually take away some pressure?
They both have their own pressures, but for me I put pressure on myself to achieve and get support over here to race next year. Back home I’m on top right now and there is nowhere to go but to stay the same for another year, or go backwards. I’d like to be here so I can visually see what I want, and to constantly keep chasing and improving and work my way up the ladder.

How many more races will we see you at here before you head back home?
For now I’m just here for the first two, because it’s easy for me to do. If the opportunity came up to ride for a team—fill in—or something like that, I would stay longer!

[Note: His plan already worked, as Todd should be racing a factory TLD/KTM this weekend in place if the injured Falk.]

I don’t want to add any extra pressure to you here, but we randomly have the same last name and this is as close to being a professional racer as I’ll ever be, so do us proud!
[Laughs] It’s good to see someone else has Todd as a last name. Everyday people mistake my name backwards, I’ll try do us proud for sure.

That’s all I ask! Back to Hangtown. You mentioned that you were happy. I’m curious about some of the differences between our races and over there. Was the schedule, the way the track shaped up, and everything way different?
I knew what I was getting myself into, but I’m not really as prepared for it as I’d like. Back home the tracks are very small, tight, and smooth, and that is the suspension I have with me so my setting is super soft for the tracks here! The schedule is also a little different, I’ve done it for a number of years and I'm so used to ours, that I have everything I want to do organized to the minute, then I come here and it’s totally different times and format and I’m also pitting from a van. I had to just wing it really.

Also on a borrowed bike, right? What’s that like just having to trust that the thing will be good for you?
Yeah, so I race for Husky back home and I couldn’t get a bike organized. No one wanted to help me. I was actually going to just buy a bike and ride that, then the day I flew out here Johnny from TLD in Australia organized me a KTM from Max Lee, one of the amateur kids. I was worried as I had no idea how the bike would be, Ben pulled it down and greased it up and made sure it was tight and away we went.

Just sent it?
Pretty much! I was noticeably down on power to some of the other guys but we will always give it our best shot and I’m grateful that they loaned me a bike to ride!

Sounds like you’re already adapting to the #PrivateerLife. Looking toward Pala this weekend, what’s your goal—aside from making a solid impression.
I’m keen to get out there, it’s going to be a little more tough for me this one because I think the track will be a lot more power draining and the bumps will be huge. But I’m going to have fun with it. Same thing [as Hangtown] I’d love to be top 15, beat some of those guys, and I’d really like to get another race in the top ten.

Awesome. We hope it works out for you and to see you at some more rounds here. Anyone you’d like to thank before we let you go?
Thanks guys I hope I’m here a little longer also. Thanks for having me. I’d just like to thank everyone who played a part in this program so far; Cari and Brian at Grindstone, Ben Griffith, Johnny McLean, Lusty, Max for his bike, TLD, ODI, Alpinestars, 100%, and Pirelli.