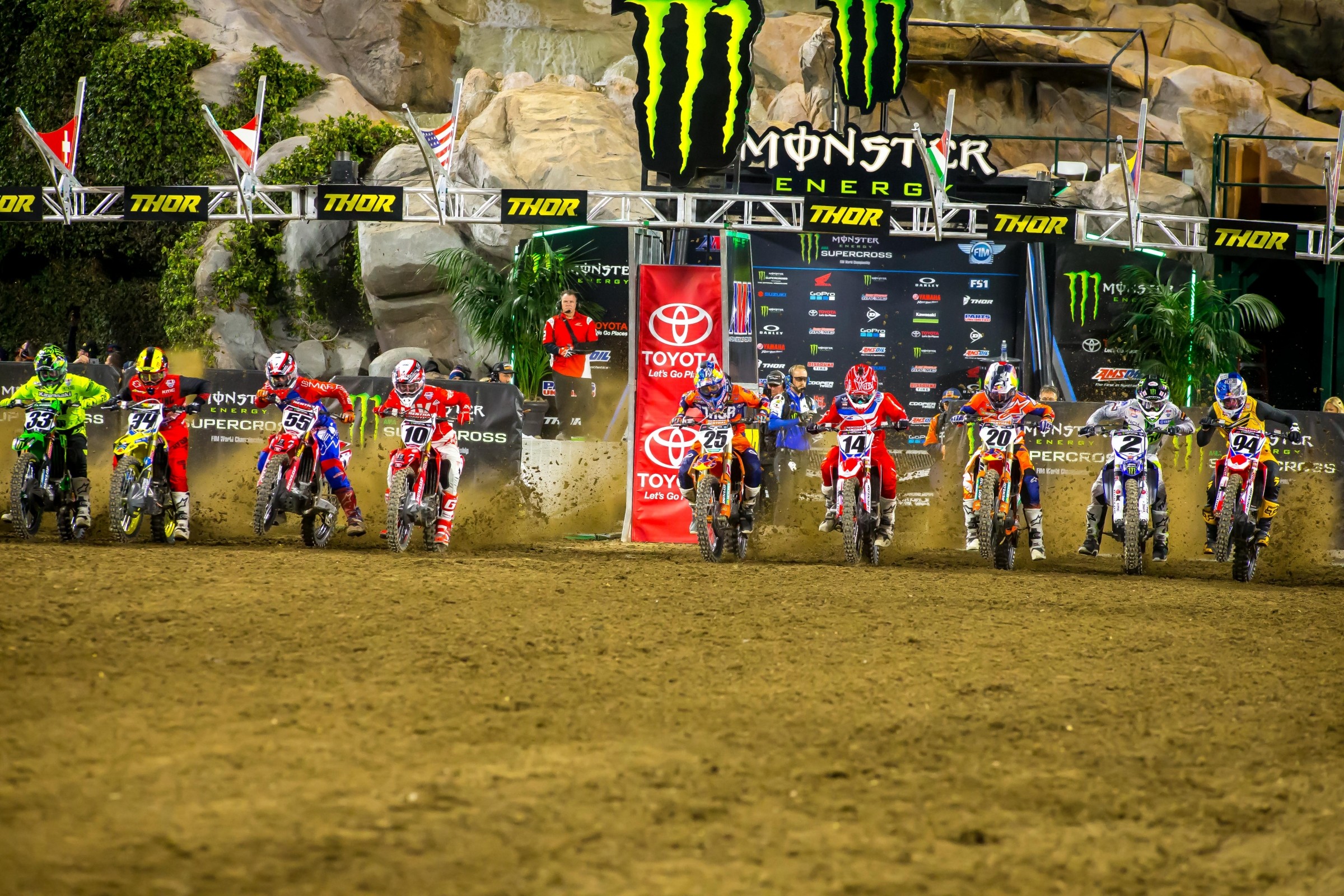 Insight Everything We Learned from the Triple Crown

Lots of chatter over Monster Energy Supercross’ first attempt with the Triple Crown format Saturday night at round three of the championship in Anaheim.

We’ve spent the last 48 hours talking to riders, perusing the data, and hearing from folks behind the scenes. Here as some things we learned from the inside.

If you were watching at home on TV, you probably felt that contenders like Jason Anderson and Ken Roczen had bad finishes in main event one only because they got bad starts. Obviously, starts are a bigger factor in a shorter race than a longer one, but there was more to it than that.

Anderson got a bad start and was also was momentarily held up by first-lap carnage. That made it tough. However, from high atop the stadium in the press box, we could see that Anderson didn’t move forward with his usual authority (this might have been harder to detect on TV, where you can’t look at the entire stadium and watch the leader and the seventh-place rider at the same time). In the last five laps of the race, Anderson had mostly clear track. He really didn’t go much faster than the leader, Cole Seely.

Anderson made up about three-tenths on Seely in the final five laps of an 11-lap race. It wasn’t like he was putting on some mega-charge and just ran out of time.

Anderson had an explanation for this. Some riders probably pace themselves, ever so slightly, in a 20-minute main event. In a short race, everyone throws down, and all of these guys can go fast.

“I just think a lot of the other guys are a little bit more mellow when it comes to 20 minutes,” Anderson said. “The first race tonight, they were just going for it. It is a sprint, but I think you have a lot of guys that are very talented and can go very fast. When it comes to only doing it for eight minutes, a lot of guys can go fast for eight minutes. I think that was the gnarliest part about it.”

Track conditions are different at the start of the night

“It’s that heat race slippery,” Joey Savatgy said. “It’s hard to explain, but just got that loose soil on top. Then we come around other parts where there’s ruts and it’s choppy.”

I talked to Jeremy Martin and he told me that not only was the first main event extremely short, but it was also harder to move up because the track didn’t have as many ruts, which can act as a separator.

Your podium in the first 450SX race? Cole Seely, Justin Brayton, and Blake Baggett. Think about that. Baggett has two-career 450SX podiums. Brayton hasn’t had one since 2014. Seely hasn’t won a main since 2015. More starts and shorter races are designed to create parity, giving more riders chances to win and get podium time. Rocky Mountain ATV/MC-WPS-KTM (Baggett) and SmarTop/Bullfrog Spas/MotoConcepts Honda (Brayton) had to be loving it. We need those teams to be happy, because more happy teams mean more jobs for more riders.

By the end of the night, the cream will rise to the top, anyway. The final main saw traditional contenders Anderson and Eli Tomac battling for the win.

It probably felt like there were more commercials because they were stacked into that long break between gate drops.

The teams requested the long breaks. Feld Motor Sports’ Dave Prater confirmed that with us this morning. The teams are worried about fixing bikes between races if they have a mechanical problem. Teams had roughly 50 minutes between the end of one main and the start on another on Saturday night.

Feld is aware the breaks seemed long and will try to tighten them, but that will take some concessions from the teams.

We’d love to see them in the night show, to give privateer riders some love and also because the LCQs often produce the best racing. Ben LaMay block-passed Matt Bisceglia for the final 450SX transfer spot on Saturday night…in the last turn of the race!

Feld has only a three-hour window to work in, though, and when you combine the length of the races with the team requests for long breaks, there currently isn’t time for the LCQs in the night show. If the breaks get shortened, the LCQs could go in.

Anyone who has ever raced a dirt bike—from the local C class to the upper echelons of professional supercross—knows the pit-in-your stomach nerves you get on the starting gate. These emotions were multiplied on Saturday with three starts that really matter—these were full-field starts, with a real impact on the overall, as opposed to half the talent in a heat race just for gate picks.

“When you add two extra starts and that much pressure and everyone on the line, there’s quite a bit more risk involved,” Tomac said. “I think that in a whole season wouldn't be a good thing.”

“Way too hectic for 18 rounds [Anderson said 18, but he obviously meant 17] of that,” Anderson said. “No way. It’s kind of scary, honestly. One start a night with all the top guys is one thing. Tonight, doing three starts with everyone, it is pretty crazy. Those first laps, if you’re not one or two, you don’t know if you’re going to hit the triple or if you’re going to double it. It’s pretty scary, but at the same time it’s probably a little bit more action for the fans, but for us it is hectic doing three starts.”