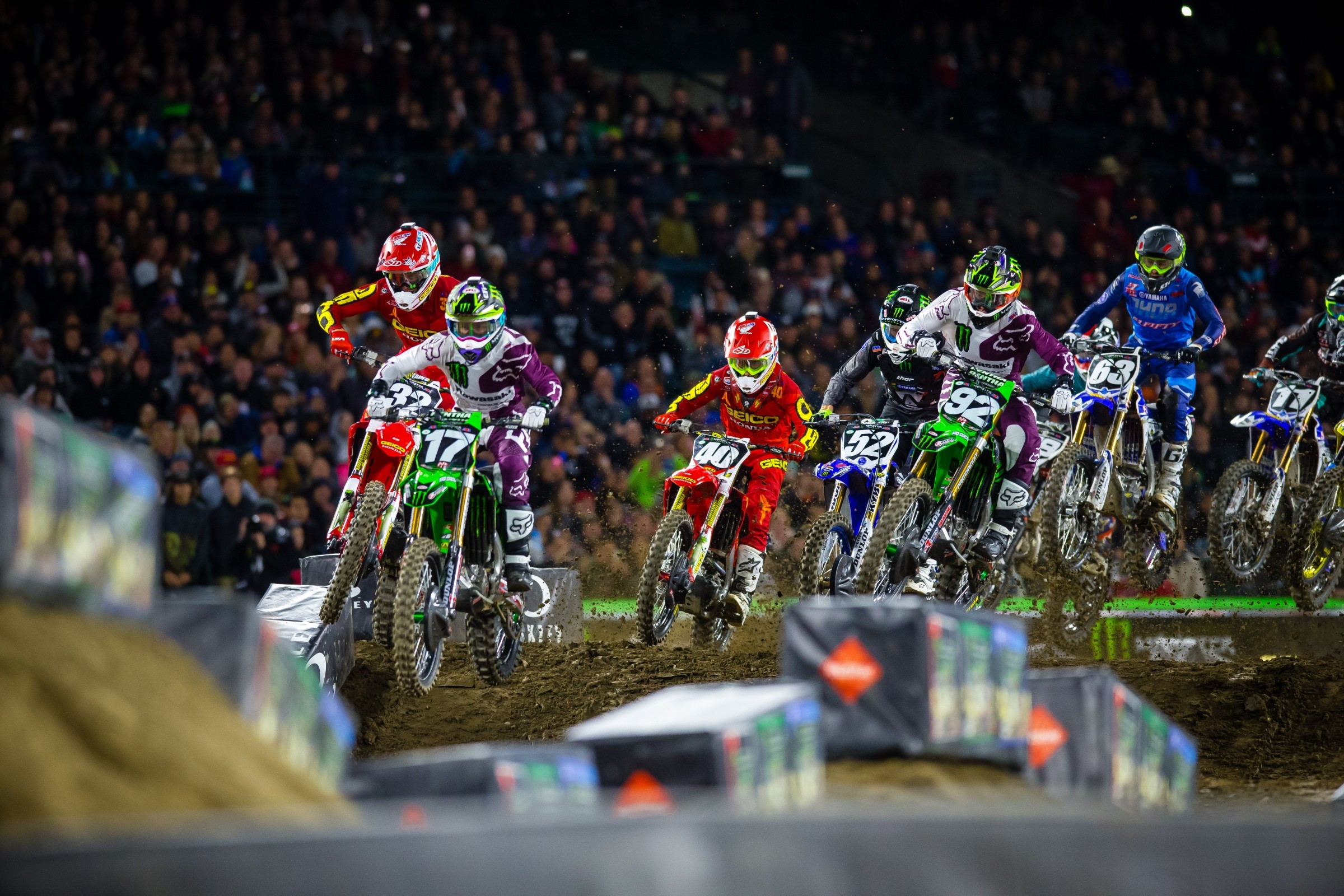 Racer X: Triple crown format. Bad crash in practice. Is it true that you finally remembered where you were by the time the third main happened? That was a great ride.
Adam Cianciarulo: Yeah, the third main was good. I didn’t knock myself out, but I was definitely dazed. I was dazed for sure. You could see that on video. I was dazed. That was a really bad crash.

You went long on the table, I guess?
I went long on the table and false neutral off the table. That was terrible. The first 30 minutes after the crash, I’m like, “No way I’m racing. No way.” So, I guess to come around…. The first two main events, especially the first one, I was so just out of it. I just couldn’t focus. I was just in my right mind. I think I kind of flushed it out of my system a little bit and I just became a little bit more aware. My fitness feels really good this year compared to years past. I always suck when it comes to that, so that felt good. If I had made some things happen a little bit quicker, I could have got Joey, which would have been nice because he would have still won and I would have got third. But it’s all right. I think it was a good race. Probably my best coming from the back race this year. It sucks it’s not on the podium, but we pretty much scratched even on the day, almost. Joey [Savatgy] gained points on me, and [Shane] McElrath a tiny bit, but [Aaron] Plessinger lost some. It’s not the end of the world.

Considering how the day started, happy to get out of A2 with decent points. Huge shoutout to the medical crew + @drfeelgoodmx + @ocsportsdoc for getting me feeling well enough to race. On to the next one.

Third main near the end, the triple after the first turn, you went far right. Kind of stuck your knee. You lost some momentum. Do you remember that?
I don’t remember that, no.

It looked pretty gnarly.
I’d probably remember it on a different day.

Triple Crown format, what did you think?
I thought it was insane. Balls-out. I was talking to Joey [Savatgy] just now getting geared up in the locker and he’s like, “It was insane.” Even that last race, when [Chase] Sexton, Joey was getting around him and all the other races. I was kind of conscious, like, “Holy s***, this is gnarly.” I think it was cool. I don’t know how it was, obviously, from the fans’ perspective, but it was a lot of racing. Everybody’s pissed off that there’s no semis anymore, and last year they were pissed off because there were semis. So maybe this makes somebody happy, who knows.

How was the rest in between them? Obviously, you had a different deal with the practice crash, but was it enough? Was it fine?
It was fine. I thought it was fine. I guess last year, had you asked me, I would have said, “No way, not enough.” But we kind of have our program pretty dialed now, as far as what I’m eating and what I’m drinking and stuff that I’ve kind of been a little bit off with in the past. So, I felt like I recovered well. Nobody was really scrambling. We had time to come back here, change gear and stuff like that.

Just too short, or…?
I hated it, man. It was so slick, and the whoops were so small—the long set of whoops. They might as well just make a big rhythm section there. I hate to be the guy that’s complaining because I didn’t win tonight, I didn’t crush it, but I wasn’t a big fan of it. It’s one of those tracks where you have to go balls-out. Sometimes that works and sometimes it doesn’t. All in all, everybody does the best job they can. It is what it is. Maybe it was just me. Maybe I just didn’t vibe with the track. I’m sure if you ask Joey, he might disagree.

I didn’t hear too much praise from other riders.
It was so slick. That corner after the finish line there, I was tip-toeing in in that last main and cutting down, and I was gaining like a half a second on dudes that would try to rail the berm and go way out. It was one of those tracks where you had to kind of stay low in all the berms. You could kind of ride it how you would ride a 20 at your training facility. Just kind of chill. That’s why I think [Cole] Seely was so good in those first two mains. He got a good start and he just clicked off his laps and that was it. —Steve Matthes

Racer X: Did you find that the fatigue factor was at all ramped up in the fact that it was just that much more intense racing?
Chase Sexton: Yeah, for sure. Honestly, I think I got better as the night went on. I kind of expected it. I feel like my endurance is really good. I don’t think anyone got tired, really. I think the last race was super intense, so it kind of showed that everyone still had the energy to go fast. To be honest, I had no idea that we were all that close. I was leading the race and honestly, at the beginning, I was just trying to see how many laps I could lead. Halfway, I was like, “I have a legit shot at winning this.” I made a little mistake and got a little tight, but it was good racing.

Overall, how do you feel about your night?
To be honest, it was a pretty rough day for me. I crashed six times, I think, so it wasn’t the best night, but I think the last main made it a lot better to go home. Being able to get on the podium again and get third and be able to lead some laps and get two holeshots was really nice. I think we made a lot of progress, even though it wasn’t the greatest night ever. I’m excited for Phoenix and I’m glad I got some starts down.

What happened in the first one? I know you had some troubles.
I got a good start in the first one and kind of got bumped around in the first section and made a few mistakes. I think I got ran into and went down. I was probably ten seconds behind everybody else and ended up 15th. So, that definitely hurt my overall chances. Just kind of went back to the rig and told myself I was going to go out there and try and make the best of it.

You were obviously riding good because you were leading. Can’t be too upset with how the day went.
Yeah, for sure. I think the team’s pretty impressed where I’m at right now. I think they’re a little surprised. I’m ahead of the game from what they expected. I feel like it was a pretty rookie night for me. I was on the ground. I had good starts, but led some laps so I’m really excited. Looking forward to Phoenix.

Did you feel like the format kind of threw you off a little bit? It was kind of mayhem, really, especially the beginning of the races.
For sure. I think the three-moto format made the races a lot more intense. I kind of expected it going in. The first race was a heat race, but you have everybody on the track so it’s a brawl for sure. Everyone was being super aggressive and I got pushed around a little bit. We got to go back and fix that and show these guys that I’m not messing around. —Kyle Scott