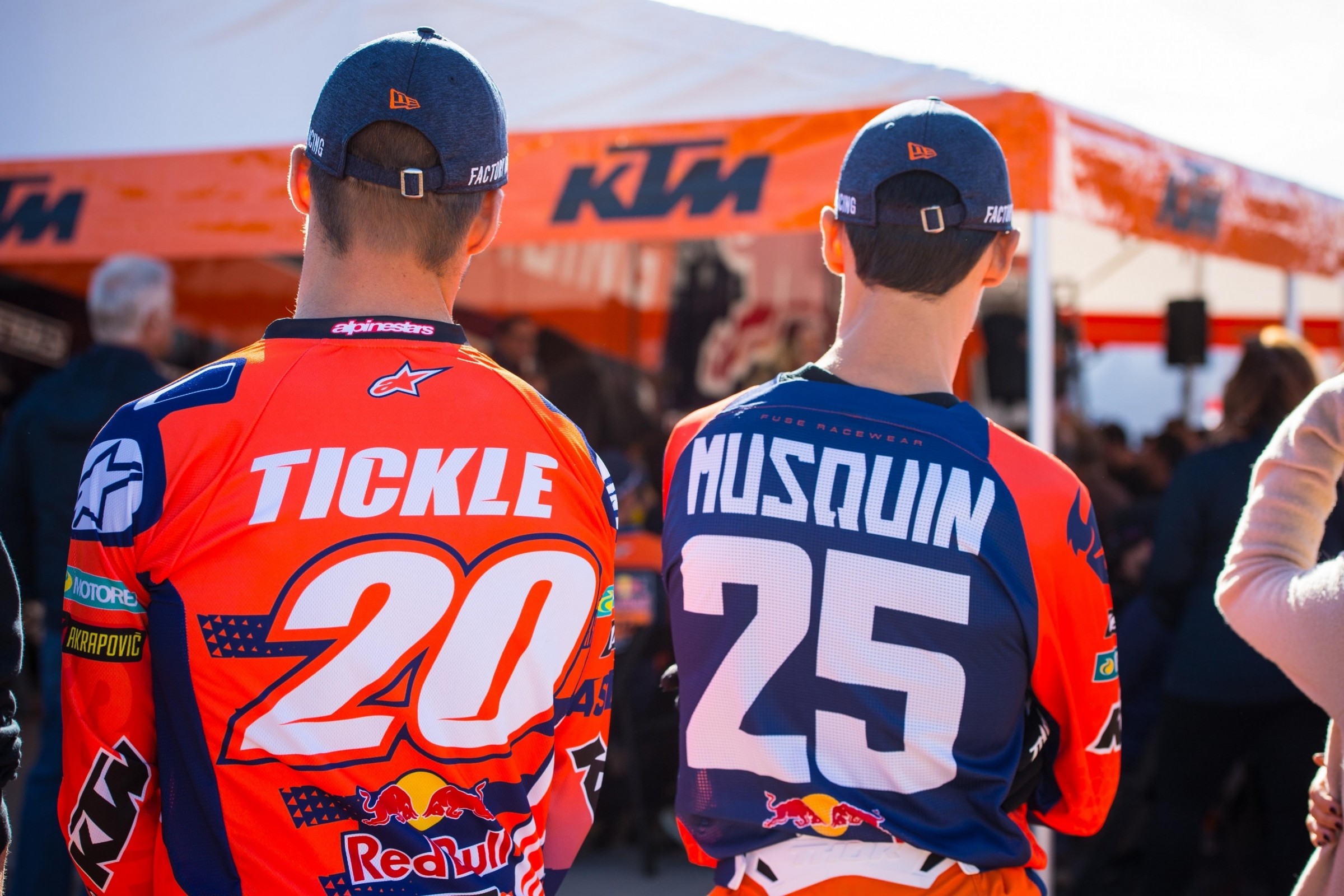 Note: Seely has spent his entire 450 career with Honda HRC. In 2016, he signed a two-year extension, which will run through the end of 2018.

Note: Roczen returns for a second year with the team, and will make his long-awaited return to racing at Anaheim 1. Roczen has been sidelined since Anaheim 2 2017 due to a dislocated wrist, dislocated elbow, and a compound fracture to his radius, which required 11 surgeries.

Note: After RCH shut its doors at the end of 2017, Tickle signed with Red Bull KTM. He essentially took the spot vacated by Ryan Dungey, who announced his retirement last May.

Note: Musquin got a new contract this off-season that will keep him with the team through 2019.

Note: Baggett signed with the team following the 2016 season, after which Yoshimura Suzuki announced it was closing down. He’ll return for a second year.

Note: In 2015, Anderson signed a long-term deal with the Bobby Hewitt-led Husqvarna team—the only person he’s raced for in his professional career—that runs through the end of 2018. We believe he’s re-upped to a further extension with the team.

Note: When Christophe Pourcel announced he was walking away from supercross racing early in the 2017 season, Husqvarna picked up Wilson, who at the time was running his own program. He excelled and was re-signed at the end of the 2017 season.

Note: Like Broc Tickle, Bogle was left without a ride when RCH shut down. He landed with another Suzuki team—Autotrader/Yoshimura (JGR)—for 2018.

Note: Peick was re-signed this off-season. The 2018 season will mark his fourth year with the team.

Note: The 2017 450 Lucas Oil Pro Motocross Champion agreed to a “multi-year” extension with the team in April.

Note: The veteran is back for another year alongside Tomac.

Note: Webb is back with factory Yamaha for his sophomore 450 campaign. He is now in his last year of his current deal with the team.

Note: Millsaps was signed this off-season from Rocky Mountain ATV/MC-WPS-KTM, but sustained a fractured left elbow in a practice crash this off-season and is out for at least the first six rounds of supercross.

Note: After not being re-signed by JGR this off-season, Barcia put together his own deal on a Honda for Monster Energy Cup. With Millsaps out, Barcia and the team agreed to a deal that will see him race at least the first six rounds of supercross.

Note: Brayton is back for a second year with the team. He’s coming off a second straight Australian Supercross title.

Note: Weimer signed with the team after spending 2017 as a fill-in for JGR Suzuki. He sustained serious injuries in a practice crash this off-season, but hopes /2017/12/12/between-the-motos-jake-weimer to be ready for Anaheim 1.

Note: Friese is back for another year with the team.

Notes: The new team will field a three-rider 450 squad in 2018 with support from Suzuki.

Notes: A new team for full-time 450SX, Hansen returns to the 450 class, and Bisceglia moves up from the 250s. Hansen is branding the team under his customary number 100 but earned AMA number 72, so we’ll see what number he’s wearing come Anaheim.

Note: No deal or news available on Stewart, but he did request that the AMA hold his career number 7 for another year.

Note: Reed is putting together his own deal to ride Husqvarnas.

Note: We hear Malcolm is putting together a privateer deal riding Kawasakis.