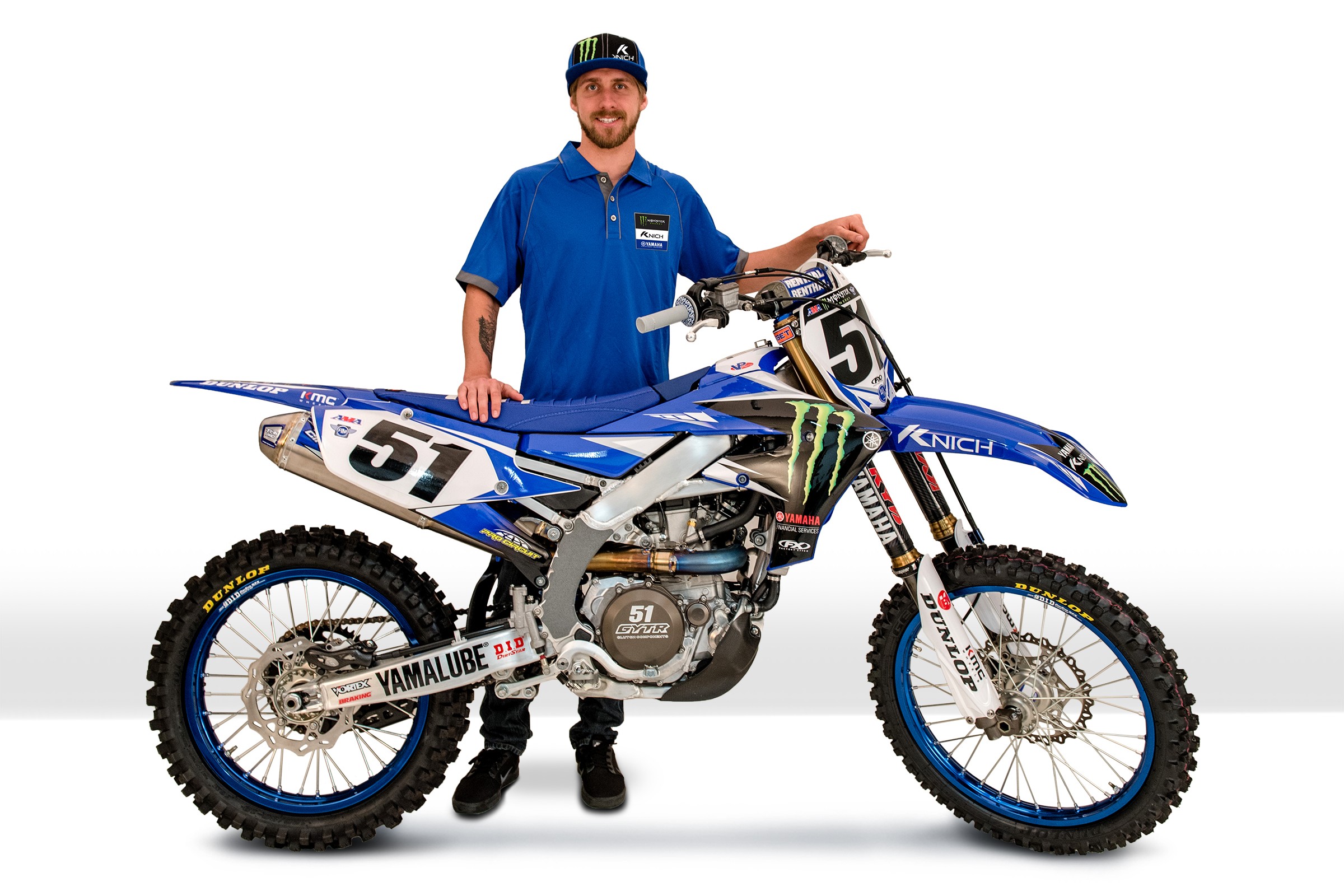 The last time I spoke in person with Justin Barcia was at Sam Boyd Stadium for the 2017 Monster Energy Cup. Set to head out for the opening practice session of the day, the 25-year-old was going at it as a full-on privateer aboard a Honda CRF450R that had, literally, been yanked off a dealership floor in Morgantown, West Virginia. “I guess this is just the way it worked out,” he shrugged, having recently parted ways with the Charlotte, North Carolina-based Joe Gibbs Racing team. To me, it was pretty apparent that while being proud of pulling together an eleventh hour race effort, Barcia was in something of a state of disbelief that his career had come to such a point.

That didn’t last long. Keith McCarty, mastermind of the Monster Energy/Knich/Yamaha Factory Racing team, had to scramble to find a full-time replacement for injured team rider Davi Millsaps. Very much in tune with Barcia from his previous racing stint with JGR Yamaha (Barcia raced on the YZ450F in 2015 and 2016), McCarty sat down with the privateer and strung a deal together that would see him race the works YZ450F at the first six rounds of the 2018 Monster Energy Supercross Championship. Immediately put to work by the team, Barcia started testing the new bike relentlessly, clicking off countless laps at the Yamaha test track up in the hills of Corona, California. And that’s exactly what he was doing on Friday afternoon when we caught up with the native New Yorker.

Racer X: Justin, you’ve been in California for a while now?
Justin Barcia: Yeah, I’ll be out here for a couple more months, too. I got here a month ago and have been working with the guys and the whole team.

Since you’re relatively new to the team, what have you had to work on for the last month?
Yeah, since it was a new bike, we kind of started from scratch and we started working on things that didn’t hurt the bike and would, hopefully, make it better. We pretty much ran through every little part. Once you fine-tune the little parts and stuff, you go to suspension and start running through suspension stuff. Once you get through the suspension stuff, you move on to the engine. We did a lot of that stuff. When all of that is finished up, I can start doing my scheduled training and stuff like that.

So it has been you and Cooper Webb sorting the bikes out?
Yeah, Cooper just came back not too long ago from that thumb injury. I got a lot of little stuff out of the way with testing and then he started and has been going through some stuff as well.

I’ve heard you two guys get a long pretty well. True?
Yeah, we’ve never had an issue so it has been pretty easy.

Immediately after Davi Millsaps was injured, you received word that Yamaha wanted you to ride the Yamaha YZ450F at the Monster Energy Cup. However, you decided to keep moving forward with the private Honda effort you had pieced together. Can you talk about that?
We had a whole bunch of sponsors for Vegas that offered to help me a ton and give me parts and stuff like that to go racing. Yamaha called and said they needed a rider right away and I would have jumped at the opportunity, but I just couldn’t do it because I had put so much work into the privateer program and I had all the sponsors that had stepped up. It was a tough decision, but I knew I had to stay with my plan. For me, when the Yamaha thing came about after the Monster Cup, it took a lot of stress out of my life because I didn’t have to worry about putting a team together and spending a ton of money like I had to do to race the Monster Cup. It was kind of a no-brainer to get on a full factory team and try to get back to where I belong. This is a fresh start for me.

Was it Keith McCarty at Yamaha who contacted you about racing for the team at the beginning of the 2018 season?
Yeah, I worked with Keith in putting it all together. It was pretty easy and we established a contract where I will start out with the West Coast tracks to see how it goes and hopefully I can continue on. We’ll start up at Anaheim and just go from there. You know, any time I got to work with factory Yamaha in the past, it was very positive and I enjoyed working with the guys. Coming over here to ride with the factory team is a fresh breath of air, you know? I like working with the crew and everyone is very upbeat and excited so far. I think if I can move on with them in the future, that would be something awesome. And the new Yamaha is very good. That means the production bike was awesome to start with and we just keep making it better and better.

Yes, that’s what everyone going through this interview will want to hear you talk about: How good is the new YZ450F and how much potential does it have? Was it an immediate leap forward or are you still getting your head wrapped around it?
Right away it was me transferring to a bike that I have known and beginning to go through the new one. The new chassis is much, much better. They did a really good job with the bike and it’s much more comfortable. It was pretty cool because I’ve never really been with a team that started with pretty much the base of a stock motorcycle where it was like, “Let’s see what this thing does and how it is.” It’s like we put it together piece by piece to make sure we don’t mess it up. I usually went somewhere and there was the full bike and it was like, “This is it.” You usually don’t have that kind of thing, so I think it is cool that we’ve developed it from scratch and have seen what the bike is and [then we] change things and see what it did. It’s been really good and positive.

Is Cooper happy with the bike as well?
I think he’s very happy with the bike. I think the old bike had some issues and he wasn’t real comfortable on it and I think when the new bike came along it was, like I said, a breath of fresh air. Everyone is upbeat and excited and ready to do the work.

Is the new Yamaha much better for you than the Suzuki RM-Z450 you rode this season? Will this bike be a step forward for you?
Yeah, I think this bike is going to be a really positive step forward, for sure. It was a bit of a struggle this year. It wasn’t like the bike wasn’t terrible or anything like that. I just had a couple of injuries and some trust issues with the bike and I never quite got the bike sorted, unfortunately, so it just never really panned out in one year. Like I said, it’s just nice to have a fresh start and a fresh slate and just go about it.

Going back to what you were talking about with working with a factory team, is there a difference between being a part of the factory effort as opposed to the JGR effort? I’m not asking you to be negative or anything, but I was just curious.
It’s definitely very different. I went from factory Honda to kind of a satellite team and back to a factory team, so it’s very different how everything works. You know, I think it’s hard for these satellite teams to beat these factory teams because the factory teams have so many more resources and so much more experience and stuff like that, so I think, for me, stepping this way has been very eye-opening. I think about some things that I wasn’t able to do on a satellite team and it kind of opens things up a little for me, and I can see maybe there was some stuff that I was missing out on, or we were missing out on, the last few years.

Have you been able to speak with Davi Millsaps at all?
No, we’re just waiting for him to heal up. I haven’t really heard too much. It’s been pretty quiet. Honestly, I’ve just been doing my thing. I’ve got my head down and I’ve been doing my training on my bicycle and doing my training in the gym. I’m doing all those little things to be the best I can for Anaheim 1. I haven’t had an injury-free off-season in supercross in probably three years or so. I’m really excited to stay healthy and to have my fitness at 100 percent and to be confident in the bike, and I think we’ll be good. You know, two years ago I came out to Anaheim and I messed up my thumb two weeks before the race. I went out there for the opening round and rode some laps, but unfortunately I couldn’t hold onto the machine. Still, I showed that my training was good and that I was good on the bike. I think if I can stay healthy, I’ll be really good.

You sound really good. When I spoke with you after you left the JGR team after the USGP in Florida, you sounded pretty down and were in the throes of doing some soul-searching.
I was definitely in a dark place those last few weeks, especially at that USGP. There were a lot of things going on that just weren’t positive and unfortunately hurt my racing. I knew I needed to take a step away. I went to England and took a couple of weeks off. I had no plans on racing the Monster Cup, but it came about and I had two weeks to get ready for it. With the two weeks that we had, I had fun with it and I did the best I could and I got a clear mind, and like I said, a clean slate.

Today is December 1, 2017. What’s the Justin Barcia game plan for the next month?
Dig deep, you know? Right now we’re in training mode and there is a lot of work to put in, but I think we’ve made some great steps already. I’m just going to be digging deep and putting the laps in.

Going into the opening round at Angel Stadium come January 6, 2018, what’s going to be the Justin Barcia approach to that event? It’s a very big one for you, and you get to roll out into that stadium on a factory bike.
Yeah, it is very exciting. I obviously want to do the best I can, but the biggest thing is that I want to go in healthy and strong. I think I’ll be very, very competitive when it comes time to go racing.