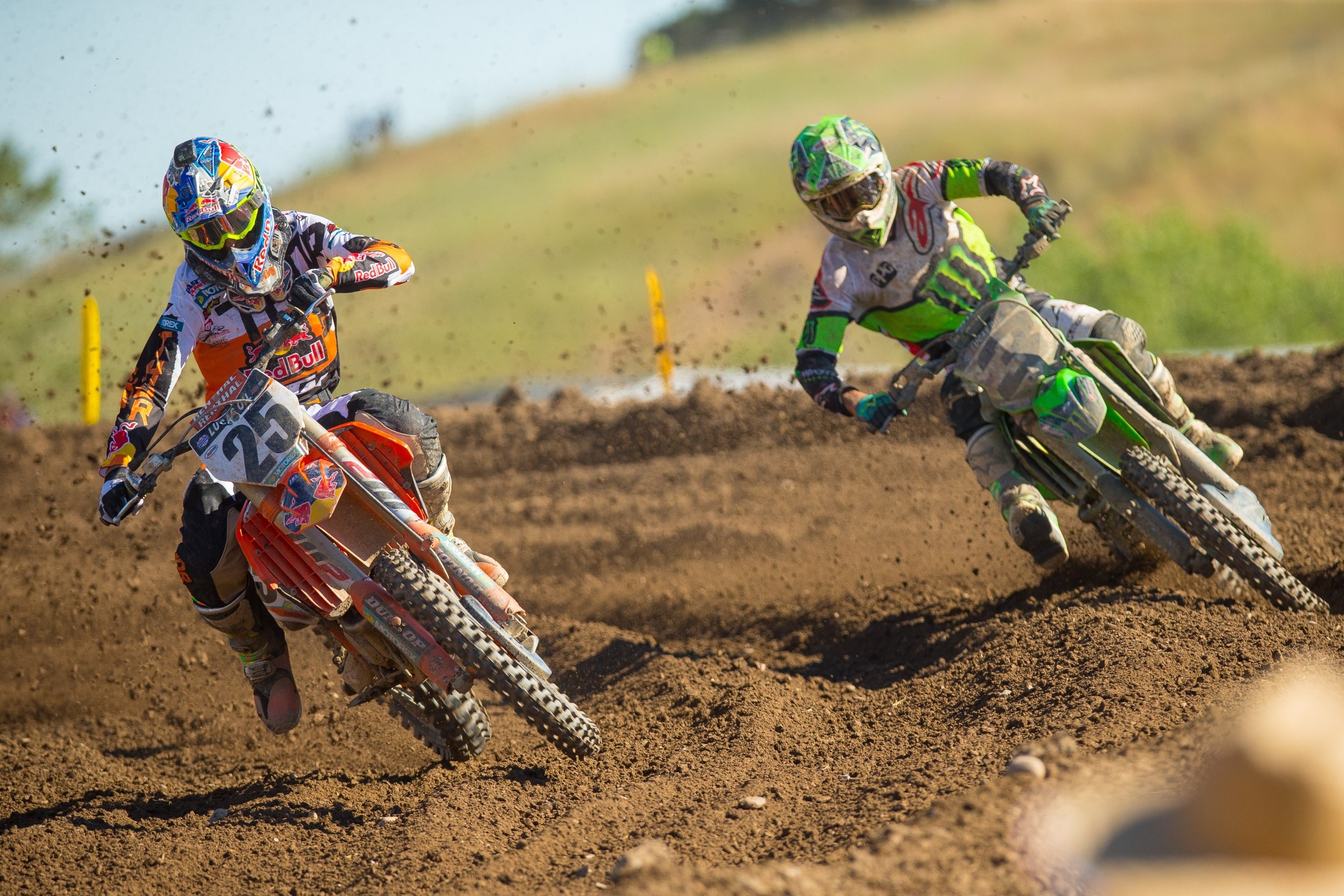 After Hangtown, I heard from an angry fan regarding Josh Grant and Eli Tomac. In the second moto, Tomac closed on his teammate and tried a few pass attempts, and finally Grant stopped fighting and made it maybe a smidge easier for Tomac to pass. My NBC Sports Network broadcast colleague Grant Langston noticed it immediately and made mention of it.

A few days later, I heard from a pissed-off fan saying Kawasaki had now proven to be hypocrites. Here they were, mad at Marvin Musquin for moving over for Ryan Dungey in New Jersey, only to have Grant move over for Tomac!

Now, this is stupid logic. Huge, huge difference between a guy getting caught with 10 minutes to go by someone who is clearly faster, and letting him by, as opposed to actually being the faster rider and slowing down to let a teammate pass with one lap to go. Grant could not have held Tomac off for long. Marvin could have held off Dungey to the finish. Big difference.

It would have been easy for me to hit this fan up and try to explain the buffoonery to this theory. However, I’ve realized something: I spend too much time with the wet blanket instead of the gasoline-soaked rags. Sometimes, it’s good to let that heat build. Some opinions can be mean or just plain dumb, but they can actually be good for the sport at the same time. Opinions, emotions, and passion keep fans invested and interested. I don’t want to make it my life’s work to ruin that.

Here in the media business, we often get accused of hyping things up and looking for drama where there isn’t any, but I will guaran-damn-tee you the hype we post on this website doesn’t even come close to the stuff you read in our comment sections, on social media, message boards (still a thing?), or the stuff said inside the walls of the team semis every weekend. Drama? Out of respect to the athletes and the industry, we don’t drill nearly as deep for it as we could. You know what we could have run on this site as headlines the last few weeks?

“Who will KTM hire to replace Ryan Dungey?”

These are real stories going on right now. However, out of respect to everyone involved, we’re not going to go nuts speculating behind the back of KTM and Yamaha about 2018 stuff that is only in the rumor stage—who knows, maybe everything breaks differently and Reed comes back to Yamaha? Maybe KTM strikes out on all options and doesn’t add anyone new? As for Tomac, well, I know for a fact that when Kawasaki tore the bike down on Monday, they found out a rock had damaged his front brake, so it turns out he did not suffer from the same problem he had at the Dallas Supercross.

Glad we didn’t push the Tomac quotes too hard.

We’re asked to sit on stuff all the time. Obviously, we knew Ryan Dungey was going to retire before he held his press conference at 11 a.m. Pacific on a Tuesday. We had three stories pre-written, loaded, and ready to post on this site that morning; we just waited until the press conference to make them live. Luckily, this industry is small and tight-knit, and everyone (mostly) tries not to burn each other. So when given info that generally sounds like, “Well, now you know the story but please, please don’t say anything until the press release comes out” we are faced with a tough decision.

Go win the battle to get it out first—and enjoy all the hits and retweets/regrams that would come with it—or respect the trust you’ve been entrusted with. You could burn ‘em now, but they’ll remember that the next time you need information.

It goes further. When a fan has an outrageous opinion, some media folks will rush to protect the sport and defend the athlete from the haters. It seems like the right and noble thing to do. It might also help curry some favor with the athlete.

It is not only a thing in this sport. Memorial Day Weekend highlights the greatest day in racing, with Formula One’s Monaco Grand Prix, the Indy 500, and the NASCAR Coca-Cola 600 running back-to-back-to-back. Watching coverage of those events closely, I noted two storylines that needed some careful defending:

1). Two-time Formula One champion Fernando Alonso skipped Monaco to race the Indy 500. He led some laps and looked to be in contention for the win until his engine blew. This despite having never raced an IndyCar and never having raced on an oval. This prompted Formula One driver Lewis Hamilton to theorize that "I looked at the times and, frankly, for his first ever qualifying for Fernando to be fifth—what does that say about Indy?" the Mercedes driver told France's L'Equipe.

2). In NASCAR, Austin Dillon won his first ever race at the Monster Energy Cup level because of brilliant fuel management (gas mileage).  The narrative throughout the media? Dillon had finally proven he could win races and is finally worthy of the iconic #3 on his car, formerly used by Dale Earnhardt.

For each of these scenarios, negative narratives can easily emerge. Maybe Hamilton is actually right? Maybe Dillon winning a race but not having the fastest car at any point doesn’t really prove he’s worth of Dale Sr.’s digit?

The media and others quickly squelched that. Hamilton’s quotes were deemed “cheap shots” by Autoweek, for example. As for Dillon, there is considerable skill to managing fuel and being fast enough to hold off other drivers, however Martin Truex Jr. was the fastest car/driver for most of the race, and Kyle Busch was fastest at the end. However, the professional pundits were quick to praise Dillon for the win and slam Hamilton for the evil take on IndyCar drivers. They defended their sports, and they provided a backstop for their athletes. Can’t let IndyCar drivers sound second-rate! Can’t let a race win not sound like it’s amazing!

I get it. Hey, I get fired up in defense mode also. When the dude hit me up on the Tomac/Grant situation I wanted to put him on blast, because this scenario was so completely different that Musquin/Dungey. We should get in there and defend the IndyCar drivers, defend Austin Dillon, defend Grant and Tomac.

But why? In the end, if people are talking, that means they’re paying attention, and these days the talk about an event usually is more fun and popular than actually watching it. It’s why podcasts and TV debate shows have become the new normal of sports media, and while some may wince at that thought, these shows are really just built around the same debates and conversations most people have themselves, usually over a few beers with a few buddies. What’s better than watching racing? Talking about it with your buddies, actually. It’s called bench racing, and it’s life.

That’s why I defended all the actions used at the end of this crazy Monster Energy Supercross season. I was fine with Marvin’s move over, fine with Osborne’s block pass, fine with the Tomac #Bunching strategy. Why? Because it was exciting! It got us talking, it got us fired up and opinionated and passionate about what had happened and what would come next. When that passion spilled over into Hangtown, and a fan wanted to rail on Grant for making life easy on Tomac, I realized it was all working. Dude was still fired up so he was watching Hangtown closely. To take away such passion by constantly trying to swat it away is counterproductive. To tell anyone who is a mega-fan of one rider to check himself and try to act unbiased is counterproductive. The goal is to have more fans doing more talking and having more opinions on more topics. That’s the grease that helps this whole thing move forward.

So while the best move “for the good of the sport” would seem to be polishing it as much as possible, defending everyone involved, and covering up drama, it’s the gnarly debates that really get attention. Haters make terrible noise, but I’ll take noise over silence. The more people I can get to understand that, the bigger this show will become.