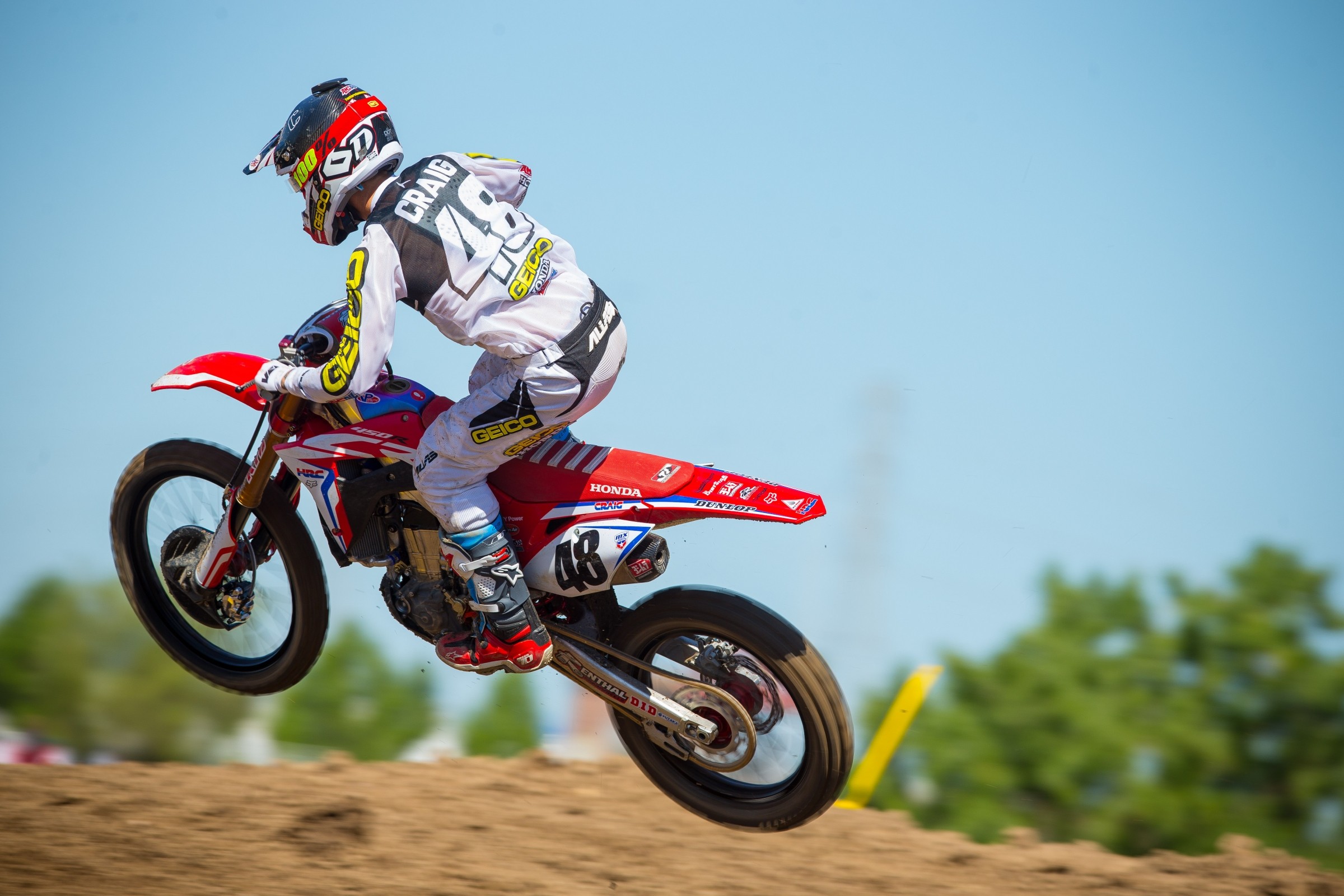 Comment: Bloss will miss the first four rounds of Lucas Oil Pro Motocross after fracturing his humerus and dislocating his shoulder in Minneapolis.

Comment: Canard will likely be back at High Point after injuring his collarbone prior to Lucas Oil Pro Motocross.

Comment: Craig crashed in the second moto at Glen Helen and sustained a boxer’s fracture. He underwent surgery to have a plate installed earlier this week and hopes to be back for High Point.

Comment: Both Enticknap brothers are out for the foreseeable future after sustaining injuries in Las Vegas.

Adam sustained broken ribs, two broken collarbones, and a partially collapsed lung, after crashing in the whoops in the main event and getting hit by Jake Weimer.

Tyler broke his tib/fib in the 450 semi race after making a mistake in a rhythm section. According to his Instagram he went in for surgery on May 10, to have two plates put in. He says he’ll make a full recovery in three to four months.

Comment: Millsaps recently had surgery to repair injuries in both wrists. He expects to return at some point this summer, although an exact date is yet to be announced.

The knife won this battle

Comment: Nicoletti is currently recovering from a fractured lower fibula, shattered heel, and a dislocated ankle suffered during supercross. He should make it back for a few races toward the end of the season.

Comment: Roczen suffered a big crash at Anaheim 2 and is still recovering from injuries to his wrist, elbow, and radius (forearm).

Comment: Alldredge sustained serious injuries in Seattle, including: a partially collapsed lung, lacerated liver, a fractured rib, fractured pelvis, and fractured L1, L2, L3, and L4. On Instagram he said he’s going to try to come back for a few Nationals this summer.

Comment: Bisceglia’s team hopes he can come back for High Point after breaking his leg while practicing at Glen Helen.

Comment: Cunningham crashed hard during the first moto at Glen Helen. Initially there were concerns regarding the injuries to his kidney and spleen, but he checked out okay. Earlier in the week Cunningham told us he was extremely sore, and that he had some ribs that were “clicking really bad.” He hopes to be able to line up at Thunder Valley.

Comment: Hampshire broke his tib/fib in Toronto, and although an exact timetable is yet to be announced, we know he’s out for Thunder Valley.

Comment: It’s extremely rare for us to include someone who is uninjured on the Injury Report, but after seeing McAdoo crash hard at Glen Helen, we knew there would be plenty of people questioning his status heading into Thunder Valley. McAdoo somehow escaped the crash with zero injuries and will line up this weekend.

[Update: Turns out McAdoo's shoulder is still pretty sore from the crash. He'll be sitting out this weekend at Thunder Valley.]

Comment: Oldenburg broke his collarbone at Glen Helen when he hit a downed bike and went over the bars. He’ll miss Thunder Valley.

Comment: GEICO Honda hopes Sexton can come back for High Point after breaking his femur in Atlanta.

Jordon Smith – Back | OUT

Comment: Smith is looking to return to racing at High Point after suffering a back injury in Las Vegas.