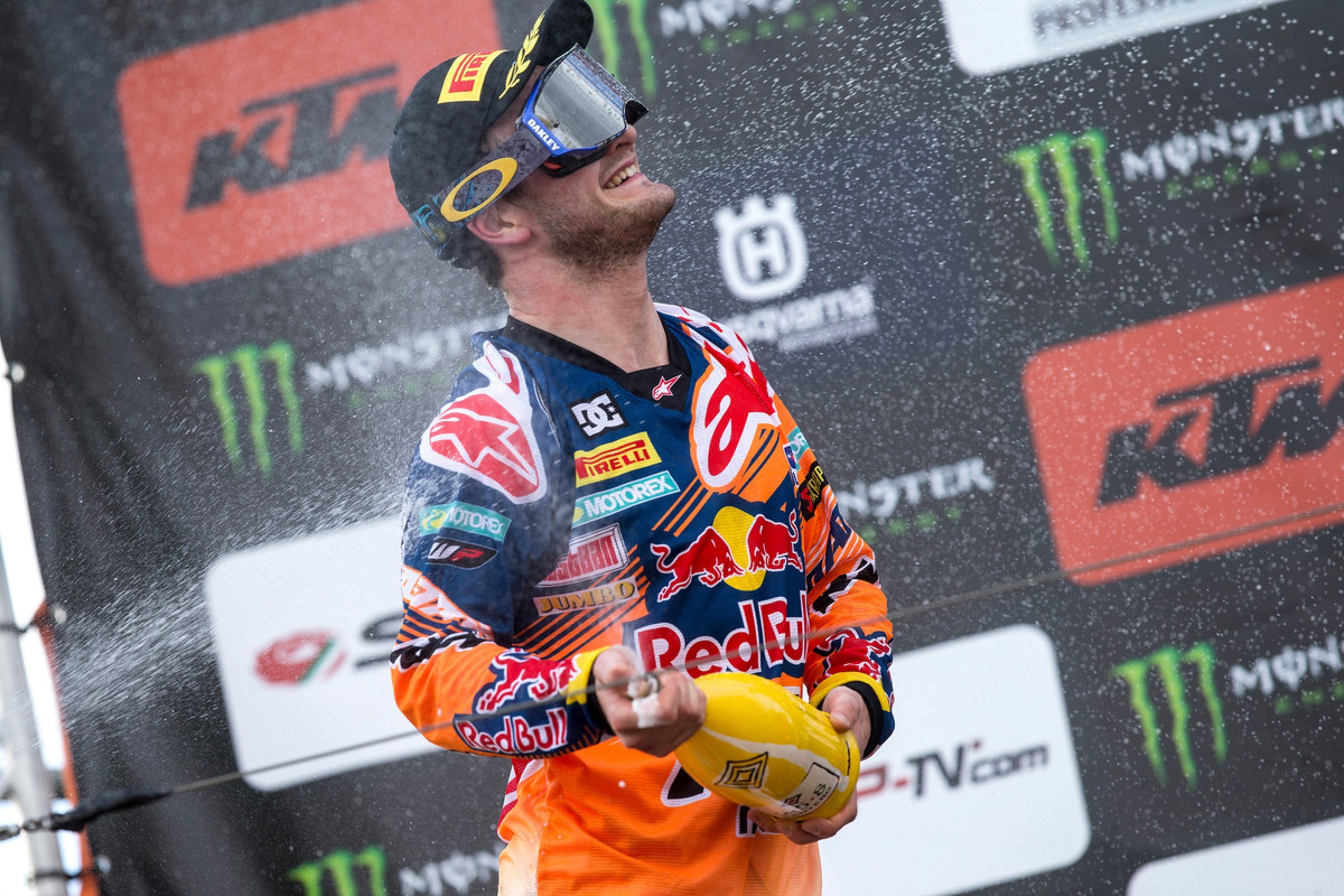 Finally, the first. Red Bull KTM’s Jeffrey Herlings banished a large degree of the doubt over his capability in the premier class of the FIM Motocross World Championship by not only winning his first Grand Prix with the 450 SX-F, but utterly sweeping MXGP by leading every session and fronting every race in Latvia over the weekend. Herlings was the first of two debutant victors with Rockstar Energy Husqvarna’s Thomas Kjer Olsen making good on his regular top five speed thus far in his first GP season to earn spoils in MX2 and become the first Dane since Brian Jorgensen (and ever in the 250 class full stop) to walk the top step of the podium.

Notwithstanding the headline makers, there was little doubt who was the star attraction as MXGP moved north through Europe and landed in the loose soil of Kegums for round seven of 19. The country—independent from the Soviet Union in 1991—hardly has a prolific background in international motocross competition, but the presence of Kegums on the MXGP slate every year since 2009 (with the exception of 2014 when the location hosted the Motocross of Nations) thanks to an enthusiastic club, federation, and subsequent funding has drawn attention from neighboring Estonia and Russia. The result of regular top-flight motocross in this corner of the world has filtered Latvian and Estonian talent into the sport and the most successful native in Grand Prix sent fans home happy on Sunday afternoon. MX2 series leader and Red Bull KTM’s Pauls Jonass was a busy man before and during the weekend, and although the 20-year-old is a famously jocular character in the paddock he had to admit that his relegation to third place by main title threat, Suzuki’s Jeremy Seewer, on the last lap of the first moto was a “pain to my heart.”

Olsen took the checkered and third place after a rugged charge from his Swiss opponent, Seewer, would ultimately prevent a dream home Grand Prix. Jonass roused the crowd with a moto two victory—his eighth from 14 so far in 2017 and now five rounds with at least one set of 25 points—but Olsen’s rally to second place was enough for the better scorecard.

“My first overall, and I could not have wished for a better day; I really felt good on the track although it was so tough,” said the Husqvarna man and proof that excellence in the EMX250 European Championship (that he won in 2016) is beneficial for Grand Prix pedigree. Olsen had prevailed at Kegums in the competition 12 months previously. Calvin Vlaanderen was a noteworthy third place overall and bumped Jorge Prado to fourth thanks to the second moto classification.

Kegums baffled once more. The sandy-ish terrain partly obscured a hard base that kicked and churned into a washboard of braking bumps and some treacherous and shifting ruts in a few key spots on the layout. Typically a fast mix with several hefty jumps, the presence of unexpectedly slick sections and soft patches caught out some of the best. Tim Gajser was lucky to escape without injury after a big crash in 2016, but was not so fortunate at this edition. A controversial line by Spaniard Jose Butron dumped the world champion to last place on the first lap of the opening moto—leading to a post-race dispute—and Gajser fought to make his way back to 14th. An even harder get-off—this time self-induced with a kicker pitching him over the bars—ended the Slovenian’s race and necessitated a visit to the medical centre for what could be a significant moment in the story of the 2017 MXGP story. As we write Gajser had allegedly damaged some ribs, but HRC will undoubtedly make an update once assessments have been made.

Wilvo Yamaha duo Shaun Simpson and Arnaud Tonus were in the wars in the second moto. Tonus was ominously stretchered away from the scene of a crash next to the waves section, but was given the all-clear from any breaks or fractures and will likely see a specialist for his neck and back on return to his base this week. Simpson, who came so close to third position in the first moto by failing to overtake Evgeny Bobryshev by just three tenths of a second at the line, exited the track in the second and smacked his left hand on an unprotected tower post causing a broken metacarpal and surgery scheduled for Monday morning in Belgium.

Falls for Monster Energy Yamaha’s Jeremy Van Horebeek and Rockstar Husqvarna’s Max Nagl showed how difficult Kegums was to judge but there were a few bright spots: Monster Energy Kawasaki’s Clement Desalle equalled a season-best second place in the first moto, the returning Max Anstie ranked sixth, just behind European GP winner Gautier Paulin, who was conservative and lacking his Valkenswaard starts to go 7-7 on the day. Bobryshev was third on the box for his second podium visit of the year and Stefan Everts’ promising find in Lithuanian Arminas Jasikonis seems to be gathering momentum; the tall 20-year-old setting the pace for the first four laps of the second moto and scoring an encouraging third position for what is still his first full-time season in Grand Prix.

Herlings was the real deal, though. Valkenswaard’s runner-up finish two weeks ago opened the tap on his confidence that had been withered by a broken hand and admittance he had underestimated the task and opposition in MXGP. Latvia saw the handle turned almost fully open and this was #84 nearing something of his MX2 pomp and panache. In his TV interview immediately after the first moto and a runaway performance the relief was evident.

The Dutchman is already talking of the championship being out of his reach thanks to an—ironic—84-point deficit to the top (unbelievably he would be the third rookie in a row if he does go on to obtain the crown) but with 50-point hauls like this one then he will rise through the table with pace. Why was Jeffrey so strong in Latvia? The Valkenswaard effect has been mentioned and while Kegums has that sandy element and some similarities to the Eindhoven circuit it was another mean and treacherous type of test. This small milestone for Herlings was about renewed feeling with the 450 SX-F and crucially two bona fide starts that helped his cause and attacking approach.

MXGP had seen four different winners and brands tread the top step of the podium across the previous six rounds (Herlings thus the fifth from seven) and although Gajser had only missed out on champagne on two occasions, nobody had placed the premier class within their clasp: Tony Cairoli is starting to near that familiar role. The Sicilian was a little slack from the gate in both outings but his 5-2 was enough to be runner-up for a fourth trophy and the red plate for the second time this year, and he now holds a 17-point window over Gajser.

Monster Energy DRT Kawasaki’s Darian Sanayei was another former EMX250 race winner and the MX2 rookie gained attention with speed to figure near the front of the field and toast a decent sixth place overall; his best yet. Rockstar Energy Husqvarna’s other GP victor this year, Thomas Covington, blasted back from a poor launch to capture sixth in the first moto, but crashed down to 17th in the second and was thankful to leave Kegums with only a slightly painful shoulder.

Back to hard-pack now for MXGP with another former Nations site—Talkessel in the hamlet of Teutschenthal—poised to stage the Grand Prix of Germany in two week’s time.