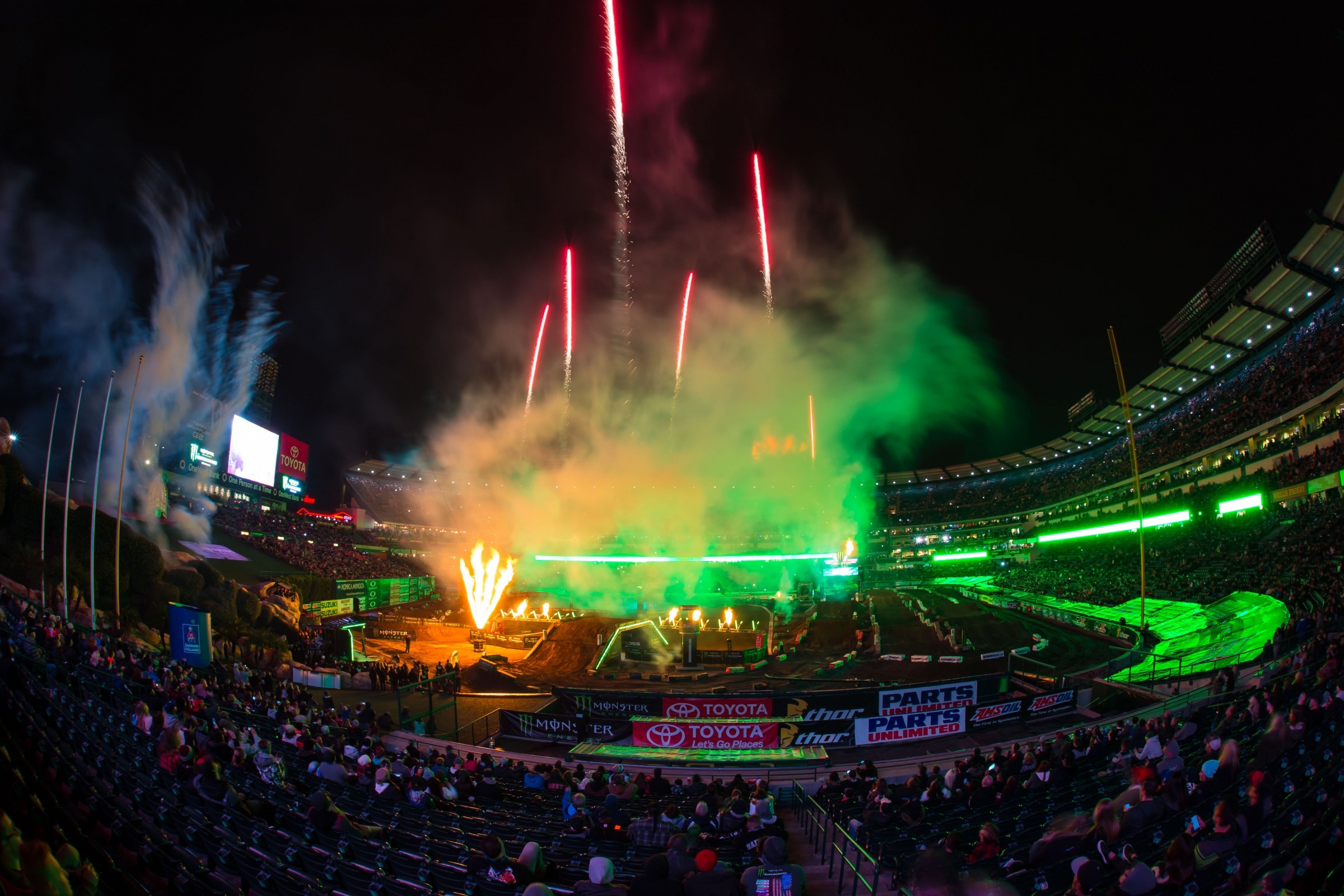 1. Predictions for the opener, please.

Jason Thomas: Anaheim 1 is a pressure cooker for the riders mentally. For the last couple of months, every thought has centered around this season and it all culminates with one night. There is an unreasonable amount of emphasis put on this race. It really is just another race in the big picture. The same amount of points are paid and when we look back on it a few months from now, it will seem like just another round. Sitting here this week, though, it is a monster in the minds of every rider.

I look for the contenders to come out swinging. The 20 minute plus one format should even out some irregularities, giving those with bad starts a chance to move forward. I think Ryan Dungey and Ken Roczen will be on the top-two steps with the last step up for grabs between Eli Tomac, Jason Anderson, Marvin Musquin, Chad Reed, Cole Seely, Trey Canard, Cooper Webb, Davi Millsaps, Blake Baggett, and Justin Brayton. I know that's not really narrowing it down, but I think there will be a big battle between Roczen and Dungey and that will steal all of the limelight and headlines. I like Roczen to win the opening salvo, but Dungey is in this for 17 rounds.

Steve Matthes: First up, welcome back 3 on 3, otherwise known as "Hot Take Central!" Yep, it's time I guess—supercross is here! Well, kind of anyways. Predictions for the opener, eh?  I think I'm going to take the best of both worlds (first Van Halen reference in this feature in 2017) and give you a prediction. By that I mean that plenty of times, something nutty happens at A1. Millsaps and Canard racing for the win, RV crashing his way back, Anderson racking up a podium as a rookie, Bradshaw dominating, RJ and Bailey having the race of their lives, and so on and so on.

But, you can't take the nuttiness and get too far out of whack. I think Roczen establishes himself as the points leader after A1. New bike and new Ken doing just like he did in his debut on the RCH Suzuki. And I think Dungey gets a so-so start but uses the timed main event to his benefit and puts it on the box in third. Ryan Dungey making the podium is perhaps the least nutty thing I've said so far. Here's where I get nuts: Cole Seely for second! A Honda 1-2 finish and it rains red (“Red Rain” is a great Peter Gabriel song by the way) at Anaheim. Seely is my pick to do some damage this year, he's been riding well and he's good on that SoCal hard slick dirt. Roczen, Seely, and Dungey at the opener. Stamp it. Well, no, don't do that actually.

David Pingree: Roczen wins and walks around shirtless at some point. Dungey will be a solid second and Seely is on the box in third. I'm looking forward to a great battle inside the top 10 between Musquin, Anderson, Tomac, Reed, Webb, Canard, and Brayton. There is a lot of talent and not much room at the top; should be fun to watch.

Thomas: I don't think it will have any sort of dramatic effect. The only real difference will be for the guys who crash in the first turn or suffer a bad start for whatever reason. They will have more time to get to the front and in those last few laps, they can make up huge gaps. It's not uncommon for the leaders to be turning lap times two to four seconds quicker than those same riders who were only losing half a second a lap or so at the lap five mark. The longer race will just add some of variance in the results column. It won't matter for the elite.

Matthes: I don't think so really. I mean, at some point late in a race someone will pass someone in a scenario that wouldn't have happened in previous years because the checkers would've already flown, but I wouldn't look for things to change much. I like the change, though. Anytime fans can see the stars for longer is a good thing. But I'm a bit disappointed that it looks like the heats and semis will be cut a bit to keep the program the same length. I would've done something else to get the stars back out there but hey, I've been screaming for change so I can't bag on something we haven't seen yet. The good guys are the good guys, they can go into a longer race and be fine. I don't think it changes much.

Pingree: A few riders will move forward or backward a position or two but all the guys on the podium are fit—this isn't changing their race. Still, this keeps us from having 12-minute mains at the shorter tracks and I like that. Plus, on those tracks where they will do 25 laps or more, the track could get chewed up and start to cause some mistakes, which could improve the racing down the stretch for all those guys from fifth to 15th.

Thomas: I have gone back and forth and I think it will be a showdown between Austin Forkner and Aaron Plessinger. There will be some flashes by both Justin Hill and Jeremy Martin, but I like the prior two to steal the thunder. Forkner will be making his supercross debut so we really can't be sure of what we will get but I have seen enough to know he is a legitimate title threat. For Plessinger, this is his year to shine. He was a bit inconsistent last season and that cost him a chance to derail Malcolm Stewart's title run. This might be the year he puts it all together. If he can get a top-five start each week, it should be a war between he and Forkner for the top spot.

Matthes: I'm with JT—I like Plessinger or Forkner to take this title home. Jeremy Martin is someone who could finally break through and win a series, but it’s the fifth year for him in SX and I'd say he is what he is at this point. Whether the new GEICO Honda ride makes a difference is maybe the interesting subplot in this 250SX West Region. As for Forkner, for a long time now, I’ve heard he’s supposed to be an even better indoor guy than outdoor guy and we saw what he can do in motocross last summer, right? But wait! Last year my buddy Seth Rarick told me Alex Martin would be very fast outdoors before the season started. After A-Mart's rough indoor season that saw him crash and regress from his 2015 season on the CycleTrader.com/Rock River team, we all laughed at Seth for predicting big things from Alex outdoors. Well, Rarick was right! A-Mart was awesome last summer. Where am I going with this? Well, Rarick told me that Plessinger is flying this winter at the test track and he's got the "A-Mart" feeling for Plessinger. So I'll take the GNCC'er turned SX'er for the title because Seth told me to.

Pingree: Plessinger and Forkner look like the best bets coming in for the title. I also think Justin Hill could surprise people, as could Mitchell Oldenburg over at the TLD/Red Bull KTM team. Pre-season chatter has him going really, really fast and if he can get a start and stay off the ground he could shock people. Keep an eye on those last two—they will be your shockers.

I think Jeremy Martin will do the same things he's done in supercross before: ride well, finish in third a lot, and have a couple crashes. He's an outdoor guy and I don't see that changing.