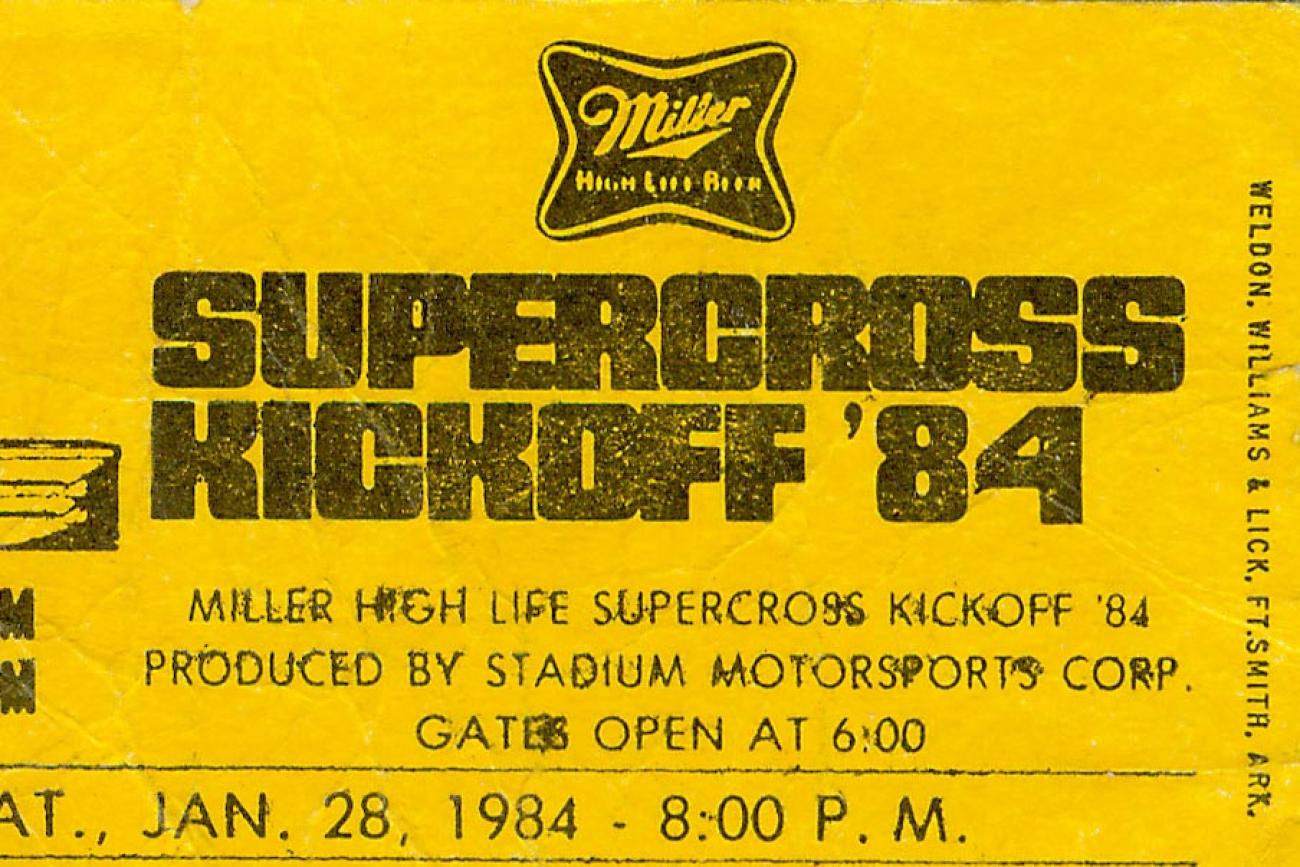 The 1984 season effectively started in late 1983 with the San Diego Supercross. That late-season date used to be the year-end, post-Trans-USA event, but since the Trans-USAs were not on the schedule in 1983 and the AMA and the OEMs were at it in federal court over the question of anti-trust, the Miller High Life/Diet Coke San Diego race was not sanctioned as part of the series. This race would be sanctioned by Stu Peters’ CMC, and they used CMC Golden States Series numbers for this one race.

Ron Lechien, the Yamaha 16-year-old wunderkind, had already signed a deal to switch to Team Honda for 1984, so Yamaha did not support the El Cajon Zone prodigy for what would have been his first hometown race. So Lechien went out and bought a production Yamaha YZ250 from a local dealer, got Bevo Forti to spin the wrenches, and went out and won the race.

Here are the highlights, voiced by Larry “Super Mouth” Huffman. Look closely, as this is the one and only time you will see Yamaha’s Broc Glover wearing #1 in a domestic supercross, not to mention David Bailey wearing #58 and some sweet camouflage JT Racing pants, with white Boot Gatorz of course! Lechien won, with Ricky Johnson second, which gave El Cajon a 1-2 on the race. (And celebrate, Steve Matthes, because Ross “Rollerball” Pederson finished fourth.)

Then came Anaheim. The series promoters introduced a whole new sanctioning body to replace the AMA. It was called InSport, and Gary Mathers, a longtime industry executive, ran it. There was also a new promoter in the mix named Mike DiPrete—the same Mike DiPrete that had been the AMA commissioner of professional racing, as well as AMA general manager of motocross competition. DiPrete would partner with PACE Motorsports on the event in Foxboro, Massachusetts’ old Sullivan Stadium and a new race at Buffalo’s Rich Stadium. Also, Mike Goodwin added Sacramento to his plate, as well as a return to Los Angeles in November after the Summer Olympics were done with the Coliseum. All told, the 1984 Wrangler Supercross Championship, presented by Miller High Life, Diet Coke, and Toyota Trucks, had fifteen rounds. There would be Wrangler Dashes, Diet Coke Catapult Jump bonuses, Miller High Life fast heat bonuses, and all kinds of other little highlights—Wrangler Jeans was even running national advertisements.

The AMA did not disappear, but their own championship was just two races: the traditional stop at Daytona and then a visit the next week to the infield of Talladega. Both races were organized by Jim France’s International Speedway Corp. And Daytona had the clout with the OEMs to still get the teams there, despite the AMA lawsuit. Those two races are in the record books as their own events, and the champion (with an asterisk) ended up being Jeff Ward of Team Kawasaki, who totaled 55 points after winning Talladega and adding in his points for heat-race wins. Defending AMA Supercross #1 David Bailey, winner of Daytona, finished second with 53 points.

Confused yet? Wait, there’s more! Those two races would later be added into the final points tally for the other series run by InSport, and that series would have a much different champion—one who finished sixth in the two-race 1984 AMA-with-an-asterisk Supercross Championship.

When Anaheim did go off on January 28—complete with a “European-style starting gate,” according to Larry Huffman in the TV show—it had what may have been the largest crowd in AMA Supercross history as the hype of this scoreboard scene hinted. It was also a glimpse at just how far the series had come in its first decade of existence.

Watch closely as Suzuki factory rider Scott Burnworth leads eventual winner Johnny O’Mara through the whoops early—it wouldn’t be much longer before a kid from Michigan named Keith Bowen started pounding through the whoops rather than jumping them two or three at a time.

O’Mara became the third Honda-mounted, first-time winner in three straight years at Anaheim—Donnie Hansen had done it in 1982 and David Bailey in 1983, and both went on to win the title. O’Mara had been with Team Honda officially since 1981 and was the reigning 125 National Champion, but he hadn’t yet broken through indoors. This would be his year (supercross-wise, anyway. The O’Show would lose his 125 crown from Jeff Ward that same summer.).

The next two rounds in Seattle saw two more first-time winners in Jeff Ward (Friday) and Rick Johnson (Saturday), who also happened to be the next two series champions.

Atlanta was next, and O’Mara got the win. Here’s Bob Varsha doing the 1984 Atlanta Superbowl of Motocross, with former champion Mike Bell doing the color.

Want to see the sport change in a single bound? Watch Johnny O’Mara’s remarkable, ridiculous launch off the finish line jump in a no-holds-barred bid to get past/over Rick Johnson—it’s at the 13:10 mark, and it’s a glimpse of how these guys ride now. No less an authority than Dave Despain himself shouts, “An electrifying leap… O’Mara did something with that motorcycle beyond belief!”

Talladega, an infield race very similar to what the riders saw at Daytona, was won by Wardy on the Kawasaki. Bailey won the one-night-only Astrodome race, and then it was up the highway to Dallas—but not at Texas Stadium. When you watch the Cotton Bowl race in Dallas, you will cringe when you see how empty the old stadium was. Part of it was the distraction of the politics of the sport; the other was the fact that the Cotton Bowl was a great big place and not always on the schedule. But it’s worth it to see a young Bruce Penhall as pit reporter—the same Bruce Penhall that won the World Speedway Championship two years earlier.

The Pontiac double-header was next, and as expected, the self-admitted “Old Man” of it all, Bob Hannah, won a race there on his #6 Honda. In his incredible career, Hannah was particularly hard to beat at the Silverdome, winning nine main events there between 1977 and 1985. That’s half of the races there, and he missed 1980 with that broken leg. But injuries were starting to dampen his title-contending powers.

Series points leader O’Mara took the second win there, then RJ got himself another win at Orlando, then Wardy won at the Rose Bowl in Pasadena, O’Mara got on top again at the Buffalo race, and David Bailey took the Foxboro win.

Finally, at the fifteenth race of the series, someone won back-to-back, and it was the defending champ Bailey on the #1 Honda. David captured the new race at San Jose to earn that distinction, but his crown was already slipping after his own bouts with injuries derailed his hopes of repeating.

The series finished up with wins for Ron Lechien on the #7 Honda at Oakland in October, and then the long season finally concluded in November at the Los Angeles Coliseum. The champion was the O’Show, as the steady and consistently fast Johnny O’Mara earned Team Honda their third straight Wrangler Supercross Championship.

The powers-that-be continued to fight it out in federal court and in the court of public opinion, but luckily for them the Information Age had not really started, so few people knew all of the behind-the-scenes drama that would take place in the months and years to come—at least not until it got really, really ugly. It was a much different time and era, unlike the Jam Sports/AMA debacle of a dozen years ago, although also proof that history often repeats itself. The AMA would return, InSport would disappear, and the sport would turn itself back around, though not without some bumps in the road and then a shocking tragedy. More on that to come.

Supercross did make another big leap in 1984—across the oceans. The Tokyo race had been running since 1982, but SX finally jumped the Atlantic Ocean too. The spectacle had attracted promoters all over Europe who wanted to repeat the magic of what they were seeing in the baseball and football stadiums of America.

The global reach included France, and the Bercy Supercross was born in1984,

It also landed in Amsterdam, Holland, where it was called Stadion-Cross (with a decidedly non-European-style starting gate)

And check out the note I got from my longtime friend in the UK, the renowned artist Rob Kinsey, who helped plan the first “world supercross” series, which would be called the Rodil Cup the following season, with Mike Goodwin in 1984.

“This is a picture of Mike Goodwin and myself with the management of Wembley Stadium London when we met to plan the 1985 round of the Rodil Cup at Wembley. Later that year I went to the FIM congress in Munich to lobby Guy Maitre and Tag Magnusson for Rodil Cup races in Wembley and the LA Coliseum. They had Coca Cola, Honda & Wrangler on board as sponsors, but the Wembley plans floundered when the ACU told Goodwin they wanted a £10,000 sanction fee and Mike said, "#$%! that, I can get the Coliseum or Anaheim for $2,000 from the AMA. Goodwin also flew the Wembley management to Foxboro to view that event and they also had a suite at Chelsea Stadium when rival Australian promoters ran a rain-effected event. The Coliseum Rodil race went ahead the following year and to offset the cost I was able to strike a deal with Goodwin to distribute videos of all of his events through my company, Stadium Video Europe Ltd.”