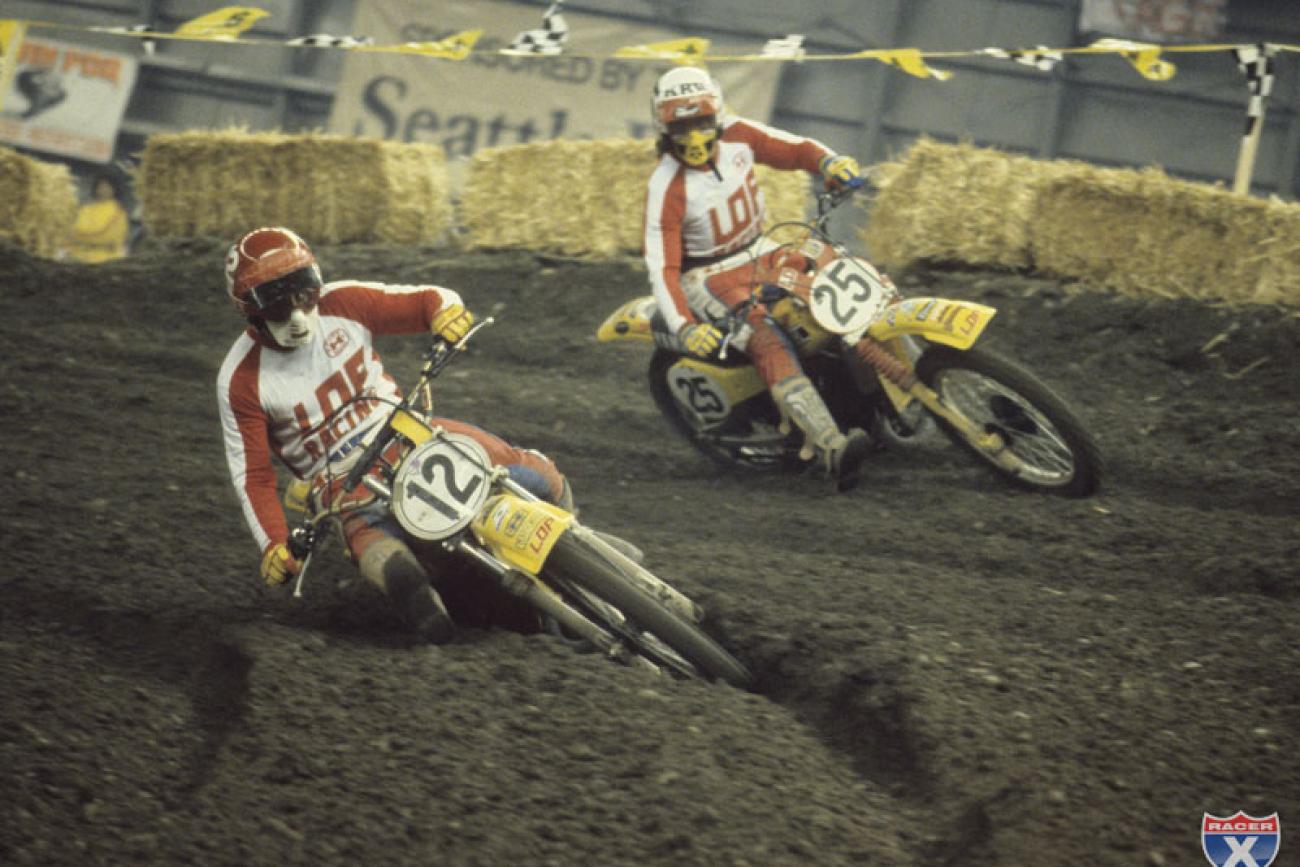 AMA Supercross was once again expanding, and the 1980 schedule would grow to seventeen races, pretty much spelling the doom of the fall Trans-USA Championship series. New cities on the tour included Kansas City, Philadelphia, and San Diego. They would also expand the Los Angeles Coliseum race into a double-header, with a race Saturday night and then another Sunday afternoon. And new names and winners would begin emerging that would shape the future.

And a new name in promotions emerged, but in a roundabout way. Mickey Thompson, a longtime car and truck racer, decided to add a motorcycle class for off-roaders as part of his Mickey Thompson Off-Road Gran Prix Championship car race, which would be held in the Los Angeles Coliseum just two weeks before Mike Goodwin’s Superbowl of Motocross.

As we ended yesterday’s review of 1979, we explained that three-time AMA Supercross Champion (and three-time AMA Motocross Champion) Bob Hannah was knocked out for 1980 in a freak water-skiing accident with his friend and rival Marty Tripes driving the boat. (And I now understand the accident was on the Colorado River, near Blythe, and not at Lake Havasu.) In one last twist, Tripes was leaving Honda to become Hannah’s Yamaha teammate in 1980, which put some pressure on him to make something happen for the brand.

When the series opened at the Kingdome, it was Hannah’s younger teammate Mike Bell on top, not the older Tripes. Riding the Dave Osterman-tuned #3 Yamaha, Bell had slowly been rising to the front of the pack the last couple of years, and his tall legs and riding style made him tough to beat, especially with tracks containing more and more whoops. He swept both night at the Kingdome, leading a 1-2-3 Yamaha sweep of himself, Broc Glover and Marty Tripes. The second night it was Honda’s Steve Wise and Kawasaki’s Jeff Ward and Warren Reid who would follow Bell across the line.

The second race was set for Oakland, but it was actually rained out and postponed for a week. When it did run, Suzuki’s top rider, Kent Howerton, earned the win and stopped Bell, who had some gearbox problems on his Yamaha. Honda’s Steve Wise made it a 1-2 for Texans on the rather rough and sandy track, with Barnett third and Honda’s Chuck Sun, the early leader who actually tangled with Howerton and went down, going fourth.

Sun would get quick revenge, winning the following weekend in Atlanta, which like Oakland, was run under a slight drizzle.  Young Suzuki riders Brian Myerscough and Mark Barnett finished second and third. It was Sun’s first-ever AMA Supercross win.

Marty Smith made his 1980 debut at Atlanta after having to undergo an appendectomy, and he did it on his new bike, a Suzuki—after six years as the main man at Honda, Marty was ready for the change. Unfortunately, he crashed and failed to make the main event.

And one other small footnote: The 1980 Atlanta Supercross was the first main event that Kawasaki Team Green rider David Bailey ever qualified for, and he scored two points for finishing nineteenth.

In other Kawasaki news, the veteran Jimmy Weinert, runner-up in the 1979 AMA Supercross Championship, asked his boss Gary Mathers if he could resign on March 17 after a not-so-great SX start, and the fact that Kawasaki was placing him in the 125 class for the upcoming AMA Motocross Championship.  Weinert’s last-ever supercross main event finish would be a tenth at the 1980 Atlanta SX. He would race just three more times as a professional, riding a Can-Am for Kolbe Cycles in the 500 nationals.

Daytona was next, with a twelve-lap main on the longer track. Marty Smith showed that he still had some speed in him, leading the early part of the race before being overtaken by Yamaha’s “Rocket” Rex Staten, who went on to win his first-ever SX main event. Staten, a veteran known for his play-riding tricks, was a pioneer in what we know now as freestyle motocross, even though that was many years away in the future. So was the late Kenny “the Dahrt” Zahrt.

Houston came next, a double-header, and yet another new winner emerged the first night, as Broc Glover finally got his first AMA Supercross win. Already a three-time AMA 125cc Motocross Champion, Glover did not race SX until 1980, his fifth season as a pro! The next night’s winner was the series points leader Bell, riding his OW-40 works Yamaha. He had finish second to Glover the night before, and Broc would take second to Bell the following night.

After the Astrodome double-header the AMA Supercross Series took a break for the start of the outdoor nationals. During that time, both Honda and Suzuki would finally switch to single rear shock bikes. Incredibly, Yamaha’s Bell and Glover would both race their SX bikes outdoors. And when AMA Supercross started up again at the Pontiac Silverdome six weeks later, Suzuki decided to leave their SX bikes in the truck and went with their outdoor bikes instead.

Bell started right back up with a win, but then Suzuki’s Howerton, second on Saturday night, won Sunday’s follow-up race over his younger teammate Mark Barnett. Bell was third and by this point had a 34-point lead on Sun and Howerton.

The New Orleans Superdome double-header was next, and this race actually featured a man-made mud hole, much to the dismay of the riders and teams. “The water hole stinks!” fumed Kent Howerton to Cycle News. A debate/argument ensued at the riders’ meeting, and it was decided to leave it in “because the TV people wanted it in the show.” But the riders were pretty much all covered with mud and hard to even tell from one and other. The debate ensued the next day and the riders threatened to not race, so the mud hole was pulled and replaced by a jump.

Mike Bell opened with a big win by passing Chuck Sun at the very end on Saturday night, and Barnett got the win on Sunday afternoon. Bell finally had an off race, finishing ninth. How cool is this? Post-Olympic, pre-Kardshian, way-before-weirdness Bruce Jenner helping out on the TV broadcast of the 1980 New Orleans Supercross.

The next round was the new stop in Kansas City’s Arrowhead Stadium, and 25,000 fans turned out to watch Howerton win for the third time on the season. His teammate Brian Myerscough was second, and series points leader Bell was third.

Another long break for outdoor racing as well as the 1980 Carlsbad 500cc U.S. Grand Prix—won by LOP Yamaha’s Marty Moates—the series got up and running again at the Los Angeles Coliseum, this time a double-header. The winner was first-time visitor Broc Glover (at least his first since he did a high school race there), sweeping both rounds on his Yamaha.

After another month-long break, the series went to Philadelphia to the old JFK Stadium, which used to host the Army-Navy football game. Bell and Glover split the wins, as the latter continued his late charge through the SX stadiums. But the event itself didn’t bring out many fans, as less than 20,000 turned out each time. Here’s some home-movie slow-mo from Philly 1980.

Only Howerton was still mathematically able to catch Bell in the points as the riders parked their SX bikes again for a two-month layoff for some Trans-USA racing. Tragically, the highly respected Gaylon Mosier was killed during that series while riding a bicycle for training alongside a public road. The driver of the truck that hit him was never identified.

The series finally ended in October at San Diego’s Jack Murphy Stadium, and Mike Bell would cap the series with another win, beating Howerton for the title by 49 points. The San Diego race did feature the one and only time Bob Hannah would race in 1980, as he finally felt good enough about his leg to enter the San Diego finale.  He was running sixth when his chain fell off. It was the last time Hannah would ever race with the #1 plate. And I swear the announcer on this broadcast of the 1980 San Diego SX sounds like Ron Burgundy!

Watch that first rhythm section and just imagine how much faster someone like James Stewart or Ryan Villopoto would do it today!