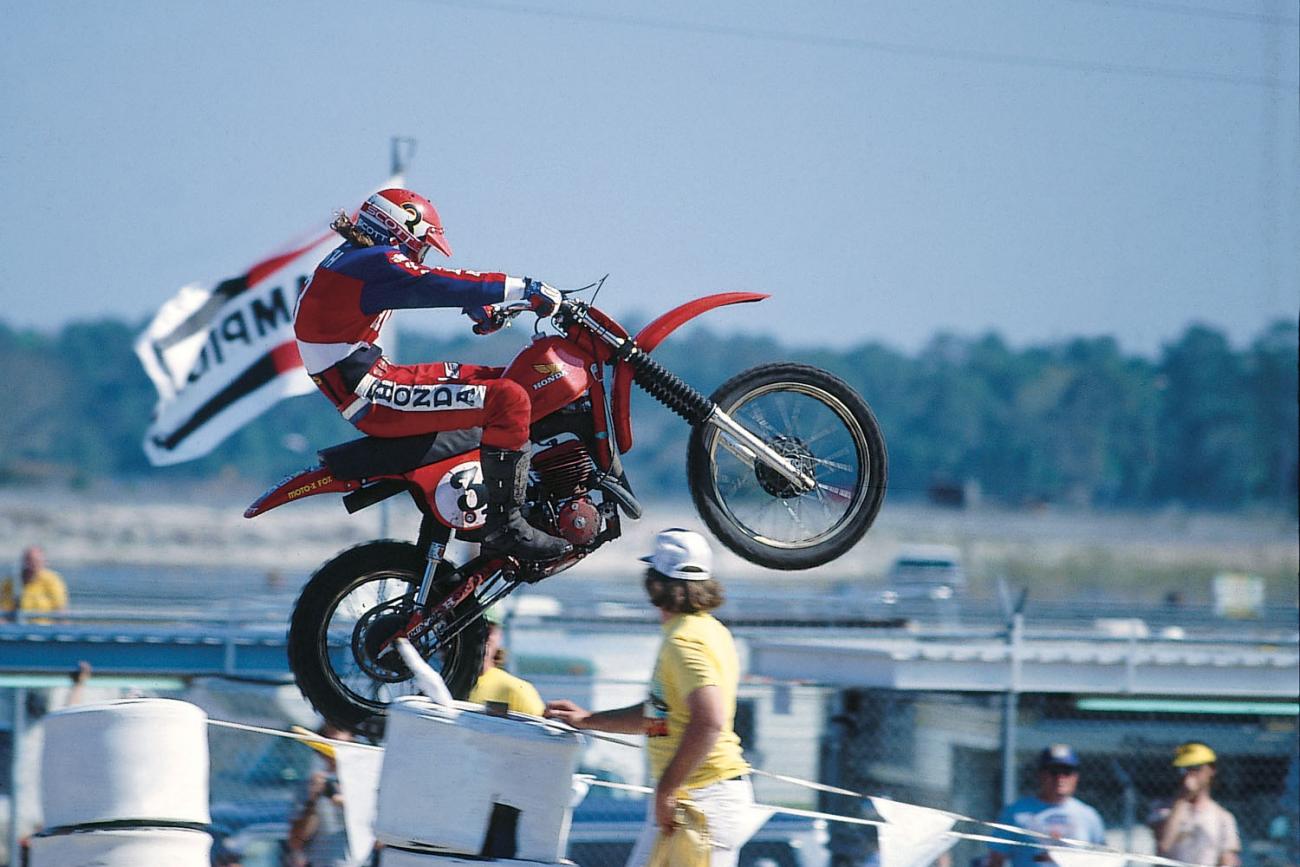 Anaheim 2015 is another day closer, and Racer X Online’s countdown of Monster Energy AMA Supercross over the years now reaches the 1978 season. By this point the novelty of “stadium motocross” was turning into a true racing discipline. Riders were beginning to string together jump combinations as the factories and industry aftermarket companies focused on better suspension, longer travel, and more torque with the motors. The schedule expanded by one race—Pittsburgh—and it would stretch from mid-February to mid-November. The late fall Trans-AMA Series was beginning to suffer as a result of the success and expansion of AMA Supercross, as fewer Europeans would come over to race, and the Americans were getting faster and faster as a result of the intense racing and advanced technique required for supercross.

There was a major series sponsor in Toyota, so the whole championship was called AMA/Toyota Supercross. Within the series another sponsored element was added, the Toyota Tower Jump, where the rider with the longest leap of the night off a specific jump earned a $250 bonus.

New to a star-packed Team Honda were Jimmy Ellis and Marty Tripes, and they immediately delivered wins, bettering the team’s established stars Marty Smith, Jim Pomeroy, and Tommy Croft. Hannah also had young teammates who would begin moving toward the front: Mike Bell and Broc Glover.

Formerly a Can-Am rider, Ellis got the series started at the Kingdome in Seattle with a victory, and then Tripes won the Atlanta main event—his first win since the 1973 Superbowl of Motocross five years earlier. Tripes had done his best the previous year aboard a Harley-Davidson, but with a potent factory Honda he reignited his career. Kent Howerton, gone from Husqvarna and now riding a Suzuki, finished second, with the late Rich Eierstedt third on a Can-Am.

At the Daytona race Hannah switched from a production-based YZ250-E Yamaha to a works OW25-78 bike. He swept Houston, then told Cycle News’ Jim Gianatsis that he had spent too much time in the off-season “doing other things, stuff like fishing and hunting, and I wasn’t riding.”

By that point injuries besieged the series. There was a big crash at the start of the second Houston race, as Marty Smith, Tony DiStefano, and Jimmy Ellis all were out. Team Honda’s Smith got the worst of it with a broken pelvis, DiStefano injured his knee, and Ellis separated his shoulder. They would all join Harley-Davidson rider Don Kudalski in the hospital—he had crashed earlier and was taken to the ER for a possible kidney injury. And Pierre Karsmakers was out for second night the night with a concussion.

The Houston Astrodome was the next stop, two nights in what was called the Eighth Wonder of the World. Here’s a clip of the track and the first main event; we’re still looking for the whole deal!

Hannah’s sweep of Houston did not give him much room on Tripes, who finished second on both nights. The series then moved up to the Pontiac Silverdome, where Hannah once again put on a clinic, sweeping both nights. Tripes would only go 3-5 in the weekend double-header, losing more ground on Hannah. By this point Kent Howerton was beginning to assert himself, getting up to speed on his factory Suzuki and finishing on the podium both nights.

The next round came in May at Pittsburgh’s old Three Rivers Stadium (my dad Dave Coombs Sr. was the co-promoter along with PACE Motorsports). Rain soaked the home of the Pirates and Steelers and also caused Hannah to go down mid-race, but he recovered and still managed to win, beating Tripes again for a fifth straight victory. Ellis was back from his Houston crash and managed to finish third.

Hannah-Tripes-Ellis was once again the finishing order at the New Orleans race, held in the Superdome. That gave Hannah six straight wins and a firm lock of the series.

Back then AMA Supercross and AMA Motocross ran concurrently, with stadium dates dropped into the outdoor schedule. In the midst of his six-race winning streak in SX, Hannah also won eight straight 250 nationals, giving him an unheard of fourteen straight wins on the circuit. This was truly the peak of Hannah’s dominance.

Mike “Too Tall” Bell, Hannah’s young teammate, finally broke the lock Hannah had on the winner’s circle. Bell stunned the world with a win at the Los Angeles Coliseum in front of an estimated 62,000 spectators. His wrench for the race was none other than Dave Osterman, now the team manager for Chad Reed’s Discount Tire/TwoTwo Motorsports squad. The win ended Hannah’s streak at six races, then a record for SX.  “I just had to do it. Someone had to beat him,” said Bell afterwards.

The race was costly for Tripes, whose bike got stuck in fourth gear in the qualifier. He did not make the main because he didn’t get to the semi due to his breakdown. Hannah had not clinched, but it was close.

At the rain-shortened Anaheim SX at the end of the season, Kawasaki’s Gaylon Mosier grabbed his one and only AMA Supercross win, besting Hannah in an intense race. He celebrated with his mechanic Rocky Williams, telling TV commentator Dave Despain, “I was trying so hard to concentrate I didn’t know what I was doing—I was just racing!”

The Anaheim race was called the Coca-Cola Motocross Finals, but promoter Mike Goodwin also added a six-lap Quaker State Oil Shotgun Showdown where the main event winners from the whole year would race for a $3,000 bonus. In that race Hannah dominated, an emphatic ending to another championship season.