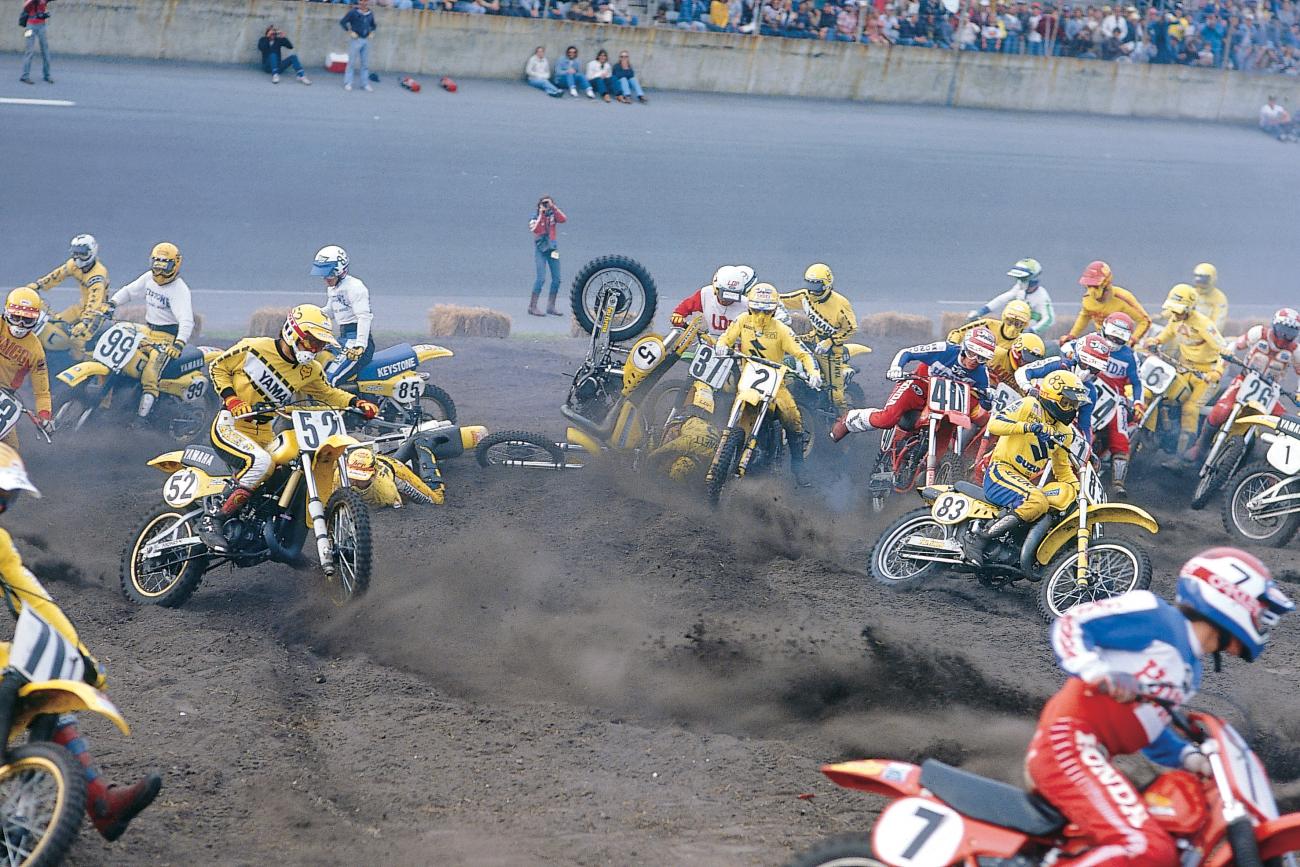 Since winning the very first “supercross” race as we know it, the Los Angeles Superbowl of Motocross in 1972, courtesy of Marty Tripes, Yamaha had mostly been the top brand in the series—having first-ever champion Pierre Karsmakers and then of course Bob Hannah certainly helped. But after Mike Bell’s championship in 1980, the brand was about to go into a very long period title in what started out as the “Yamaha Super Series of Stadium Motocross.”

The 1981 AMA Supercross Championship would see the rise of Suzuki, led by the three-pronged front of AMA 250 National MX Champion Kent Howerton, AMA 125 National Champ Mark Barnett and the former 500 National MX Champ Darrell Schultz. They had taken over the brand’s reins from such earlier greats as Tony DiStefano and Danny LaPorte, though neither Tony D. nor Danny “the Door” had taken a supercross title. With its 1981 line-up, Suzuki was poised to make a title run.

Howerton got the season started with a win at the new opening round, Anaheim’s Angel Stadium. Sixty-three thousand fans turned out to watch the race on the last Saturday night of January, and though former three-time AMA Supercross #1 Bob Hannah was finally back racing full time, he was not quite himself. He would end up sixth on the #100 Yamaha, and his teammate Bell, the defending champion, would place third. Yamaha's other star, Broc Glover, winner of four rounds the previous year, threw away a great start and was involved in a chain-reaction crash. He didn’t score any points in the main.

After Shultz led early in the main, Howerton and Barnett went back and forth up front. The “Bomber” did all he could to hold off his older teammate, but Howerton put a physical pass on Barnett and made it stick. They would finish one-two, with Shultz fourth despite a couple of spills. Here’s some YouTube highlights of Anaheim 1981.

Shultz showed his real speed by sweeping the next two rounds at the Seattle Kingdome double-header, known as the Yamaha Gold Cup Supercross. First he won the Saturday night main event, taking advantage of a collision between Bell and Barnett that left both on the ground scrambling. Bell got going first to hold on to second while Barnett finished third ahead of Honda’s Steve Wise. Howerton finished in eighth-place.

Incredibly, at this moment, the series points lead was shared by three different riders: Bell, Barnett, and Shultz, who all had 48 points (the math included points for heat race wins too). Shultz won again in Sunday’s matinee, and Barnett was once again second, with Howerton scrambling to third, giving Suzuki it’s first-ever 1-2-3 in an AMA Supercross main event. And Shultz, who hailed from NorCal, was the new stand-alone points leader.

The Bomber finally got a win of his own at Atlanta’s Fulton-County Stadium—the same building that would mark his last AMA Supercross win a few years later. Said Barnett to Cycle News after his dominant win in front of 45,500 fans, “The only thing I had in my mind after I got out front was to beat them bad enough so that everyone knew who I was and that I was here today!”

Howerton finished closest in second, then came Bell and Shultz. Hannah was a decent fifth but well below his own standards.

“I don’t know if I am going slow or if they are going fast,” said Hannah to Cycle News’ Tom Mueller. “It’ll take awhile for me to come back. Who knows, maybe never. All I know is it doesn’t feel too good riding in the back!”

Daytona was next and Suzuki kept on rolling, though this time it was Shultz back out front after pre-race favorites Barnett and the comeback-seeking Hannah went down in a massive first-turn pile-up in the forty-one-man main event (yes, forty-one). Yamaha’s Donnie Cantaloupi and Honda’s Jim Gibson ran second and third in the main, Honda’s Donnie Hansen fourth and Suzuki’s Denny Bentley rounding out an unlikely top five. Barnett would recover for eighth, Hannah seventeenth. The points lead was back in Shultz’s hands, but Suzuki was 1-2-3 in the rankings and still undefeated after five of twelve rounds of AMA Supercross.

Barnett would push that number to six and then seven wins in a row for Suzuki with his sweep of the Houston Astrodome, blasting away the field in both Mr. Pibb main events (back in the eighties it wasn’t unusual to see various soft drinks as sponsors of individual events).

Barnett’s great rides in Houston would be tempered by Shultz’s problems. He tore his knee up in qualifying on Friday night but still managed to gut out a ninth-place ride. But the pain was too great to ride on Saturday night, and he effectively gave up the points lead as well as his chance at the 1981 AMA Supercross title. Howerton would finish his homecoming race with seventh-place and second-place finishes, respectively. The man making waves was suddenly Broc Glover, who went 2-3 on the two nights.

The series went on another one of those long breaks—five full weeks—before starting up again at the Pontiac Silverdome for the Toyota Truck Supercross doubleheader. The Silverdome was always Hannah’s place, and he surprised everyone by riding like he’d never been hurt the year before, winning Saturday night’s main for a remarkable seventh straight Pontiac win (excluding his 1980 season on the sidelines). He was helped by an unlikely crash off the “Toyota Tower Jump” by early leader Glover, and then Barnett losing his rear brake cable after tangling with Shultz, trying to race despite his bad knee. Hannah would better Howerton (now his fiercest rival after their April 5 bashing at the “Saddleback Massacre” 250 national) and Mike Bell, who was riding well but not fast enough to win on the #1 Yamaha.

Riding his Jeff Clark-tuned RH250-81, Barnett got back on track in Sunday’s matinee, finishing ahead of Bell, Howerton, Cantaloupi, and Howerton. Glover didn’t ride after doctors found a hairline fracture in his wrist from the previous night’s crash. Shultz was also a no-go.

The next two races were again Barnett wins, at Kansas City and the Los Angeles Coliseum, respectively. The races took place on May 2 and July 11, with outdoor national races sandwiched in between. The Kansas City race was the Mr. Pibb Superbowl of Motocross, and it put Barnett 40 points clear of his teammate Howerton in the points with two races to go. Bell finished second, Hansen third—the 1980 (Bell), ’81 (Barnett), and ’82 (Hansen) AMA Supercross Champions were all on the same podium. Here’s some footage from that race.

Barnett closed the deal with a runaway win at the Datsun Trucks (now Nissan) Superbowl of Motocross in front of 61,000 fans. The win marked Barnett’s sixth in eleven rounds, and Suzuki’s tenth in that same eleven. Honda’s Chuck Sun would finish the race second, with defending champ Mike Bell a frustrated third—despite being steadily fast all season long, he had given up the title without winning a single race.

And in a side note, there was a women’s race at the Los Angeles Coliseum. Dede Cates won, with Kathy Holman second and Kathy Wall third.

Barnett’s great season continued on the 125 outdoors, where he won every single round but the last one at Carlsbad, which he missed with a broken collarbone. He did come back for the last SX race at San Diego and finished seventh. Mike Bell finished fourth there, which was good enough for him to finish second in the final standings.

The winner of the last round was Yamaha’s Glover, now all healed up, over Honda’s Gibson and Hansen. And finishing a career-best-to-date fifth was David Bailey on a Kawasaki. Cycle News celebrated Glovers “home grown win” on the following cover:

“The local rock radio station, KGB, came out with their ‘home grown’ album, and I was from San Diego, so that was the double entendre with the title on the cover of Cycle News,” said Glover on the phone this afternoon. “It had nothing to do with anything else from that era.”

So why did Glover not race much supercross in the seventies, even when he was winning three AMA 125 National Motocross Championships? He was clearly one of the fastest riders of the era, and from 1977 to ’85, would win six different AMA Motocross Championships—including the 1981 AMA 500cc title, as well as the Trans-USA title (which was run for 250s). He also performed well once he finally did started racing the full supercross series.

“It was a Yamaha deal and the whole mixed feeling about supercross as it was getting going back then,” said Glover. “Yamaha had Hannah dominating, and then Bell came along, so they didn’t really need me—they wanted me to win #1 plates on the YZ125, which was their biggest-selling bike. They didn’t want me hurt either. Outdoors were still more important to a lot of people.

“And third, it was in my deal with Yamaha that I got to finish high school, which I actually did,” laughs Glover, proud Valhalla High School alumnus. “I can tell you, today a rider wouldn’t be able to miss supercross like that, for the sake of staying healthy and staying in high school.” (Great footnote: One of Broc’s classmates was future Olympic diving champ Greg Louganis, as well as his younger teammate Scott Burnworth.)

So that’s the story of 1981, and the best year ever for Suzuki in AMA Supercross (and yes, that includes Ricky Carmichael’s time on yellow). Tomorrow, everything is about to turn red!