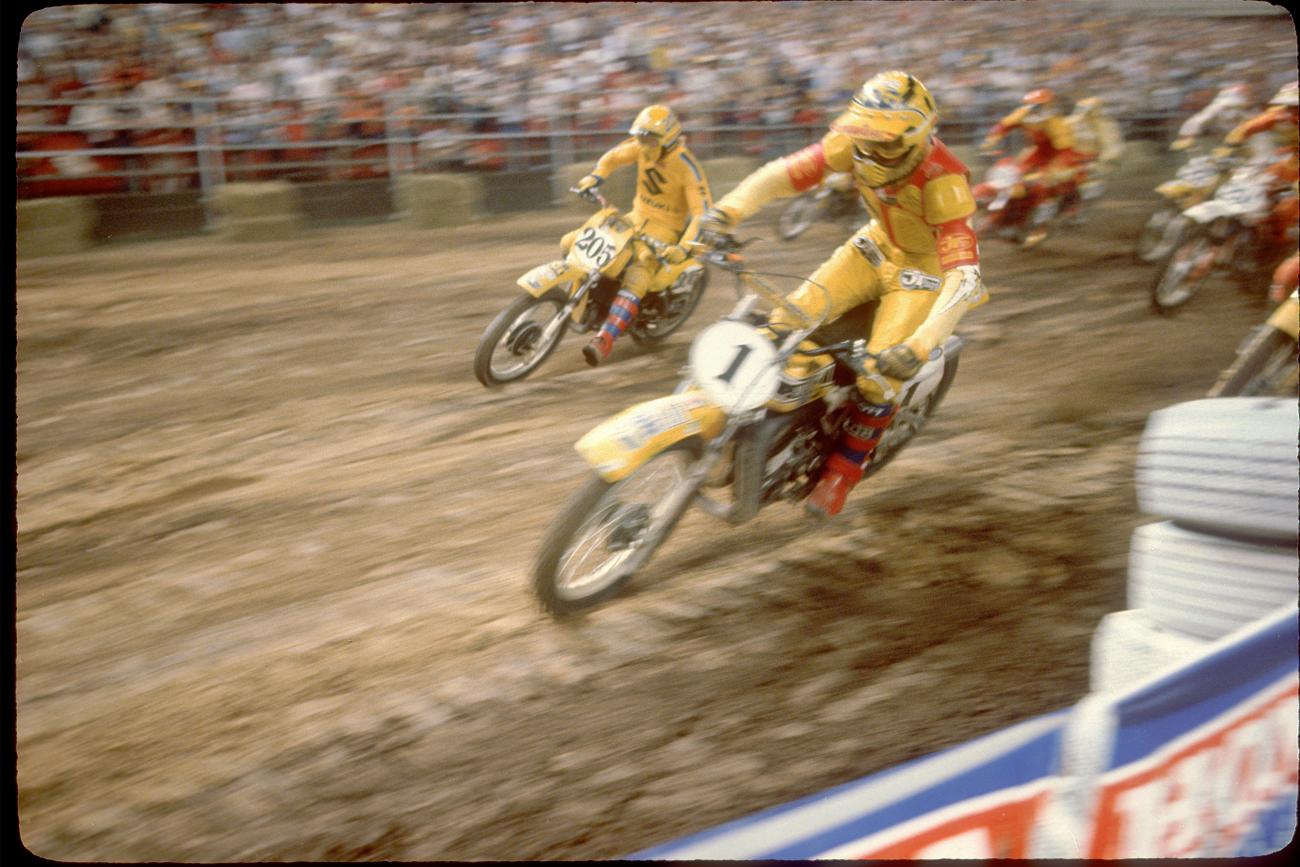 The 1979 AMA/Toyota Supercross saw the series continue to gain critical mass. The series expanded again, this time to twelve rounds, with double-headers in Seattle, Houston, and Pontiac. But everyone expected more of the same in the results, as Bob “Hurricane” Hannah was showing no signs of slowing down on his works Yamaha.

When the series participants showed up at Oakland, new to the AMA Supercross schedule in 1979, they weren’t expecting to see beach sand on the stadium floor, but that was basically what they got. The one who was rider prepared for it was the cagey old veteran Jimmy “the Jammer” Weinert. His Kawasaki factory mechanic Roy Turner has brought along a paddle tire like the ones used to ride the Glamis sand dunes. What happened next was one of the strangest episodes in supercross history, as all of the principles recounted for Todd Huffman’s epic Motocross Files episode on Weinert.

What made the win even more of a psych-out was the fact that Weinert was also racing in a neck brace, leaving his younger competitors with the impression that he was hurt. After the race, the AMA would outlaw the use of such tires in SX and MX.

Hannah ate more sand that anyone in Oakland, finishing second as he started on his third straight title run. Steve Wise, the factory Honda rider, placed third. And in a sign of the changing times, only one non-Japanese bike made the main event: Dan Turner’s KTM. He finished ninth.

At the next round in Seattle, not a single European bike made the main event. A Yamaha was once again out front, but this time it was Mike Bell, Hannah’s younger teammate, winning for the second time in his career, ahead of Suzuki’s Danny LaPorte and Honda’s Warren Reid. And in another nod to the changes, more than half of the riders hailed from the same state, including the entire podium. California had taken over.

Hannah, fourth the first night in Seattle, finally grabbed a win the second night in another California sweep, bettering Kawasaki’s Tommy Croft and Honda’s Marty Smith. Hannah would add another win in the series’ return to Atlanta and the southeastern portion of the US.

Daytona was next, and for the second time so far in the series, it was time for another startling run by Weinert, who hailed from New York and had actually won a race at the Speedway way back in 1971, when it was part of the Florida Winter-AMA Series. Paddle tire or not, Weinert was just plain fast in the sand, even late in his career, and this time he simply out-smarted Hannah and everyone else in the forty-man field. The Jammer worked his way up to the front on the big track Gary Bailey built back then, with “gator pits” and cutting through the fences and across the pavement, and then surprised Hannah on the very last lap. Check out the CBS “Sports Spectacular” TV coverage (which keeps getting better as the years go by) hosted by Ken Squier and Dave Despain.

Hannah rebounded from his Daytona loss with one of his patented storms, dominating both Houston Astrodome races and once again sweeping both Pontiac Silverdome races on the last weekend in April. Weinert did not do so well at either stop, and that in turn put Hannah in firm control of the points lead.

After a long break for some outdoor racing, the 1979 AMA/Toyota Supercross Championships resumed at the New Orleans Superdome. It was time for another first-time winner, as Team Honda’s Steve Wise rode an inspired race to out-duel the veteran Weinert for the main-event win. Here’s a film clip of Wise’s win, which came on his birthday and was practically a local race for him since he was from nearby Pharr, Texas.

The Los Angeles Superbowl of Motocross attracted a staggering 76,064 fans, according to Cycle News, and it marked the worst race of Hannah’s career to this point—he barely qualified and then finished twenty-first after a bad start in the twenty-five-man field.

“I feel like I am on drugs, the way I’m riding,” he joked. “I think somebody slipped me an old lady drug. It was a bad night.”

Yet Hannah clinched another AMA Supercross Championship—his third in a row—because Jimmy Weinert did not make the top five. He had also just recently wrapped up the 1979 AMA 250 National Championship, his third outdoor title in four years.

The entire sport was about to be rocked at its foundations. After three years of dominance, Hannah’s reign was about to end in a shocking way: While water-skiing out at Lake Havasu, with his friendly rival Marty Tripes driving the boat, Hannah got too close to the shore and hit some rocks, badly breaking his leg. He would not be able to race again for more than a year, vacating his spot at the top of AMA Supercross.

There was still some racing to do, but not until November, after the rebranded but badly struggling Trans-USA Series, which attracted just one European participant—Belgium’s Andre Malherbe. And he ended up winning the first round on his factory Honda at Mid-Ohio! That marked the end of another era: That was the last win in the series for an international rider, and the series itself, once the biggest of all in America, would be gone in two more years.

Finally, back at Anaheim on November 17 for the finals, Kent Howerton would finally get his first AMA Supercross main event win, five years after his first of many outdoor national victories. Rounding out the podium were Honda’s Warren Reid and Yamaha’s Bell, with the veteran Weinert fourth, clinching second in the final standings—not bad for the oldest man in the series!

So the seventies ended with supercross bigger than ever but with its best rider ever—Bob “Hurricane” Hannah—out after three straight championships. There was going to finally be a new champion, but whom?