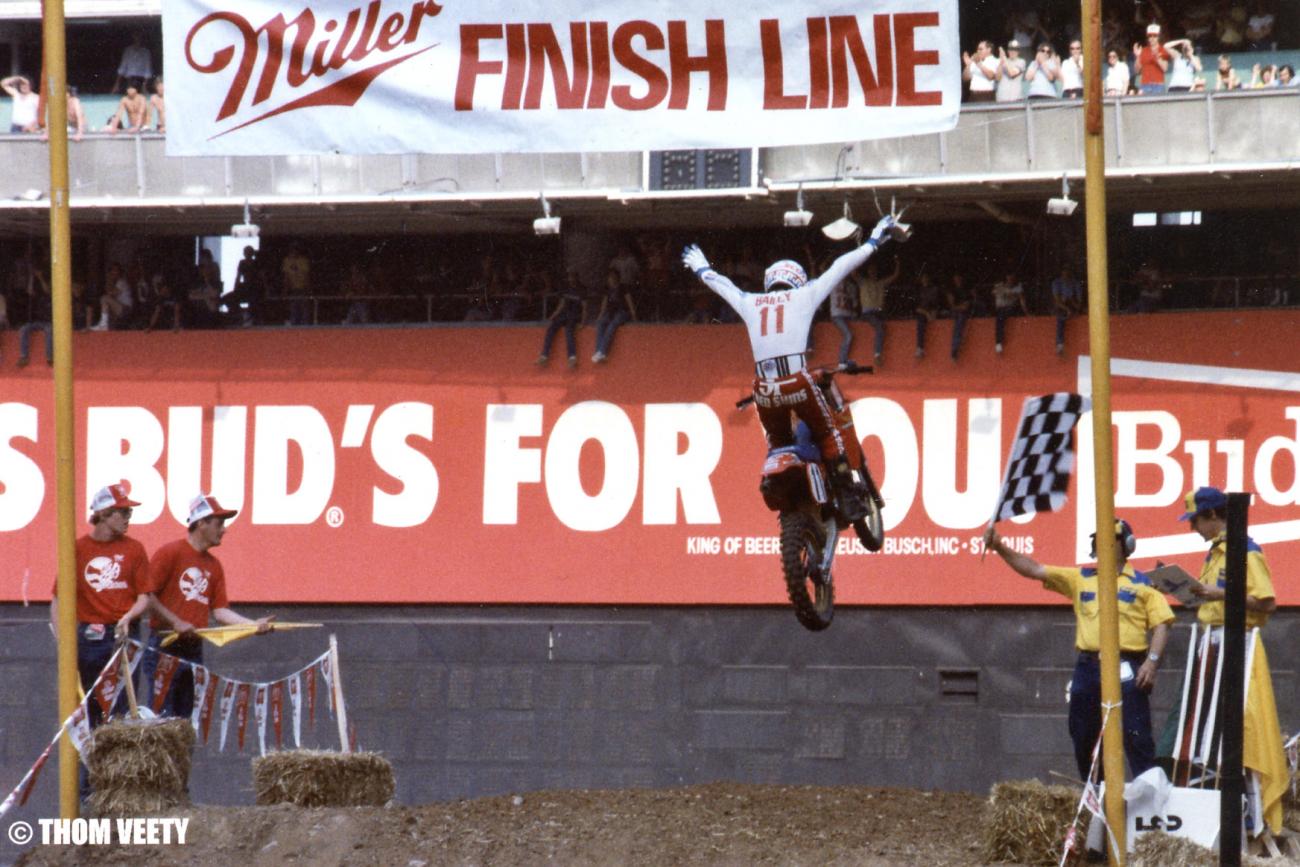 The sport was in upheaval in 1982, with the Trans-USA Series failing after the factory teams all decided to stay home in California to prepare for the next year’s AMA Supercross tour, which would expand to sixteen races in 1983. The AMA responded with an anti-trust lawsuit in federal court, arguing that the OEMs had colluded together to force the Trans-USA Series to fail. The suit was announced on September 23, 1982, and would reverberate around the sport the next few years. The conflict wasn’t just about the Trans-USA Series either, but differences of opinion in the format of AMA Supercross—the promoters wanted to add more girth to the heats and semis and make the mains longer, all in the hopes of a better entertainment package—as well as the AMA’s infamous claiming rule, which the factories hated.

While all of that was playing out in federal court, the 1983 Wrangler Super Series AMA Supercross finally kicked into high gear with that controversial format that called for the riders to race heats, ten-lap semis, and twenty-lap main events. Points were awarded for each race, so figuring out the standings took more of an actual math professor than a “Motocross Professor” like Gary Bailey. And with an incredibly deep field of talent—six different men would win main events, and that half-dozen did not include Johnny O’Mara, Jeff Ward, Rick Johnson, Danny “Magoo” Chandler or Kent Howerton, let alone the injured champion Donnie Hansen and past race winner Darrell Shultz—every time they went to the starting gate it was a serious test. And without a second class to show the audience (125 Supercross still did not exist), it was often up to the “Wheelie King”, Doug Domokos, to keep the fans entertained between each of four heat races, two long semis, the LCQ race, and finally the main event.

There would also be a Wrangler Grand National Championship that tallied every rider’s points in SX as well as their outdoor national class, and the winner would be named GNC #1. What complicated matters was the fact that guys like Mark Barnett, Jeff Ward, and Johnny O’Mara were all in the 125 class together, while David Bailey, Rick Johnson and Bob Hannah rode 250s outdoors, and then you had Broc Glover, Kent Howerton, and Danny “Magoo” Chandler in the 500 class.

The opener was almost wiped out by rain, though this time promoter Mike Goodwin covered the track in plastic to protect it, having learned that lesson in Atlanta in 1982. But Miller High Life apparently had been promised a mud hole, either that or the tarps either all “leaked” in the same spot! No matter, the “Little Professor” David Bailey put on a riding clinic, winning with ease.

“You know me, I am always here, always trying,” Bailey told Cycle News’ Karel Kramer after winning by some thirty seconds. “It had to happen, I am just glad it happened here at the first race of the season. It feels good, that’s all I can say.”

And when they handed Bailey the forty-ouncer of Miller High Life, he said on NBC, “I’m going to drink this whole thing!”

The Miller High Life Anaheim Kickoff show on NBC was hosted by Paul Page and Indianapolis 500 legend Johnny Rutherford, both wearing sweet Members Only jackets. Check it out here.

Bailey’s teammate and good friend Johnny O’Mara made a last-turn pass on Yamaha’s Glover and then did a no-hander at the finish line, just like Bailey had. Bob Hannah finished fourth in his official Honda debut. The Hurricane had left Yamaha after he had been banished to the 125 class the previous summer—a demotion of sorts for the all-time winningest rider in AMA Motocross/Supercross history to that point. With the brand pushing a “Honda Horsepower” theme all season long, the brash Hannah was the perfect spokesperson, especially with the chip he had on his shoulder from his separation with Yamaha.

Hannah immediately rewarded Honda’s trust with a sweep at the Seattle Kingdome, winning the first night from start to finish and then coming from behind after a big first-turn pile-up to win on Sunday afternoon.

“All it took was a holeshot, and Honda gave me that,” said Hannah after the first win.

David Bailey finished second in both main events, and left Seattle in a tie for the lead with Hannah. Ward and O’Mara took turns finishing third. Here’s a clip of the 1983 Houston SX.

Former champ Mark Barnett finally broke Honda’s stranglehold on the top with a win at the mud-splattered Atlanta SX. Hannah was there for second while Yamaha riders Glover and Donnie Cantaloupi were next. Honda support rider Steve Martin rounded out the top five in a race that was more about survival than speed.

At Daytona, Hannah dominated, pulling the holeshot on the two-row start and winning in a twelve-lap route over his younger teammates O’Mara and Bailey. Hannah then hoisted Miss Supercross up on his shoulders on the podium, the kind of spontaneous celebration we just don’t see anymore. At that point, Hannah held an 18-point lead over Bailey, who had come from dead last to win his heat after a first-turn crash.

“Well, I have a good bike now, and I’ve been riding a lot,” offered Hannah afterwards. “I think Daytona is a good track for Honda too—you know that sand drags the horsepower out them—and if you’ve got about five horsepower more than anyone else that’s enough to do it.”

The next round was at the Houston Astrodome, and Hannah and Barnett split the wins. On the second night, Hannah was caught up in a big first-turn crash with Bailey, Ward and Mike Bell. He could only recover for a ninth-place finish, dropping a handful of points to the winner Barnett, who now took over the points lead. Here’s a short highlight reel from the second race

In Dallas, Mike Bell picked up his first win of the season (and ultimately the last of his career) on the #18 Yamaha. Hannah was second while the late-arriving rookie sensation Ronnie Lechien, riding the #224 Yamaha factory bike, earned his first podium as a professional in only his fourth-ever AMA Supercross main event.

Hannah went to the Pontiac Silverdome sick as a dog, yet still managed to take the win in the Saturday night opener on the John Savitski-designed course. Hannah felt so bad that he let his teammate Bailey into the lead, thinking he would be holding the “Little Professor” up, but then Hannah himself was helped by the fact that Bailey waved him back by with five laps to go.

“I wasn’t going to do anything foolish to catch Hannah,” said Bailey afterwards, hobbled by an ankle injury himself. “He let me by, and I knew he was cutting faster laps. Under the circumstances, I was happy just to get second.”

Barnett, third the first night, rebounded to win on Sunday over Bell and his Yamaha teammate Broc Glover. Hannah mustered himself a fourth-place finish to salvage his sick weekend.

Barnett survived a demolition derby of a race in Kansas City, as O’Mara, Glover, and Mike Bell all crashed out. The track had mostly flat, slick covers, so most of the passing had to be done through the air on the various doubles and triples that were placed around Arrowhead Stadium. Hannah had another off night, finishing eighth.

In May the series made its first-ever visit to Washington DC and Bailey won, even after breaking some toes in the middle of the main event. Hannah was right behind him and Barnett third, keeping the points close between the three. Coincidentally, the race was run during the afternoon because there was fear that early-eighties Washington DC after dark might not bring supercross fans in from the suburbs.

It was just before the Orlando SX that Hannah’s run to the 1983 title came to an end. Under the new supercross points structure, Hannah had a solid points lead, and the old Hurricane appeared to be back—he even ran “Hurricane II” on the back of his pants. Then he snapped both wrists on press day, knocking him out of the series. Bailey would have to step up even more for Honda, and he would, but not before the rookie Lechien blew everyone’s minds with a win in the main event at Orlando. In doing so, the 16-year-old became the second-youngest winner in AMA Supercross history, with only first-ever SX winner Marty Tripes younger. (The race Tripes won at the 1972 Los Angeles Coliseum actually counted as an Inter-Am round in those pre-SX years.)

When the series went back to Pittsburgh’s Three Rivers Stadium for the first time in five years (not to mention the last time), Bailey finished second to the ever-steady Glover of Team Yamaha and then came back to win at the old Foxboro Stadium outside Boston (yet another new addition to the series). He was starting to pull ground on Barnett, who finished sixth in Pittsburgh then had a full-on disaster at Foxboro when his works Suzuki’s transmission expired.

Bailey went into the final round at Pasadena’s Rose Bowl with a 10-point lead over Barnett. The Rose Bowl was another early-starting race, but for a different reason: Pasadena has a noise curfew after dark. Bailey rode smart all day long, winning his heat race over Glover and then guiding himself to a sixth in the main event. With Barnett finishing second to Glover, that gave Bailey room to cruise to the title. Here’s the Rose Bowl Supercross finale from Pasadena.

And here’s a short season-in-review video (and you have to see the scenes of Darrell Shultz, Honda team manager Roger DeCoster, and fitness guru Jeff Spencer jogging together along the beach in slow motion!) from Peter Starr about “Honda Horsepower.”

Tomorrow, things get really sideways for the AMA, the promoters, and the entire sport—here comes 1984!