Being the second new venue of the year, the Oakland Supercross race was set to be a great battle. Yet, James struggled throughout the earlier part of the day in which he suffered two practice crashes and decided to skip the last practice session. Coming into the night events there was a lot of question marks surrounding Stewart’s condition, but all of those were answered as he won the first heat of the night by ten seconds.

As the riders lined up for the nights main event, a light drizzle started to fall, which was set to make things a little more interesting. When the gate fell, James jumped out to a top 5 start and then quickly made his move into the lead on lap 3. For the next 17 lap’s, James continued to lead the race and finished it off by capturing his second win of the year. Along with the race win, James also propelled himself back into the point’s lead of the series. 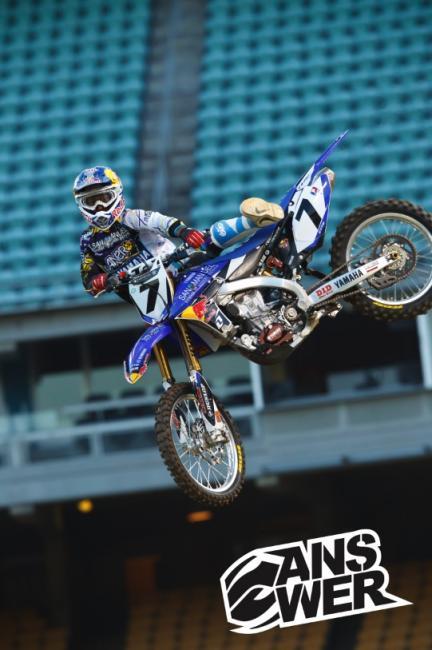 With the next round of the AMA Supercross series this weekend in Anaheim, James looks to extend his points lead and capture his third race win of the year. As always check out our website and gear at Answerracing.com. As well as find us on our social sites: Facebook.com/Answerracing or twitter.com/Answerracing to have a chance at winning some cool swag!