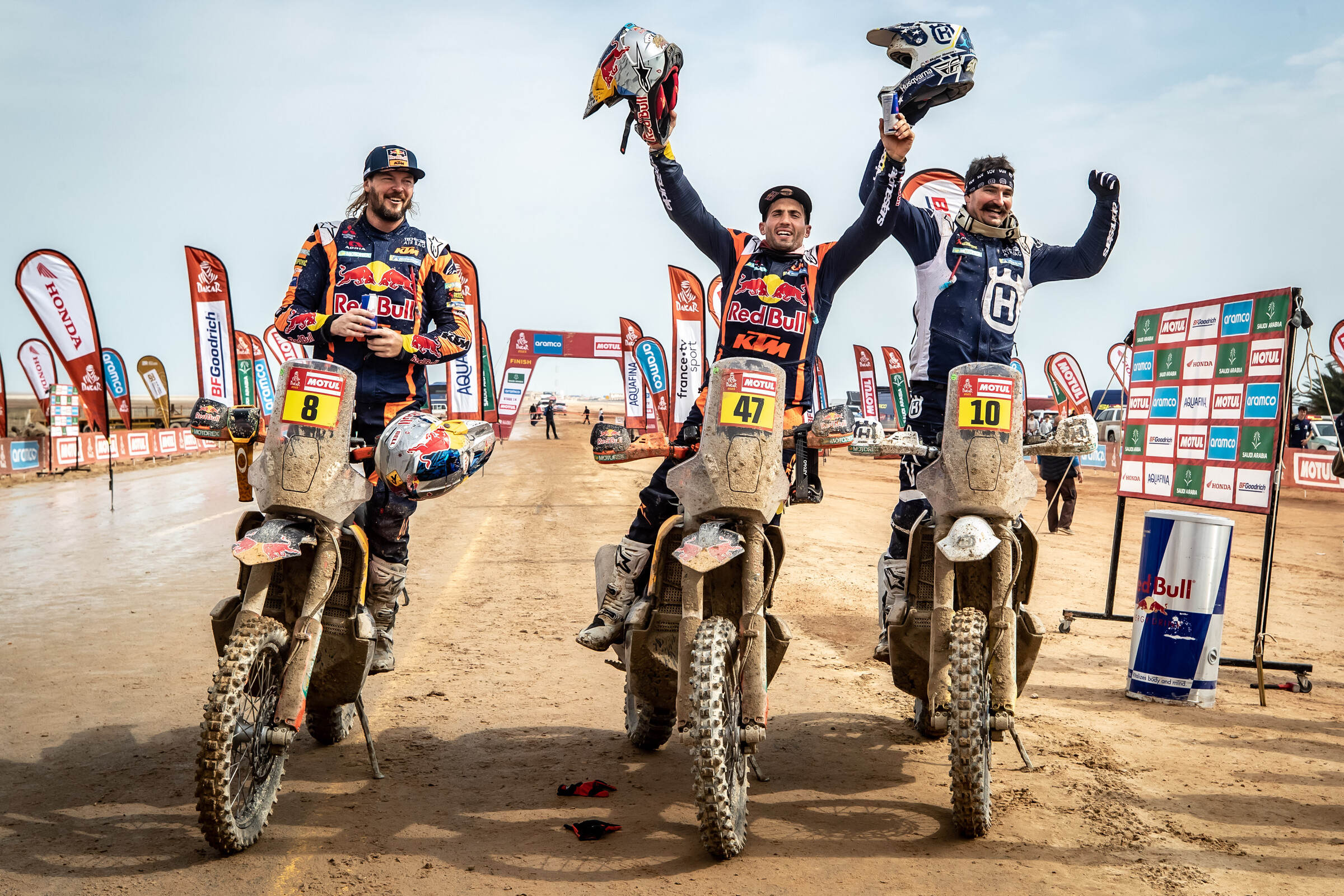 After two grueling weeks for competitors, the 45th Dakar Rally has come to a completion. Kevin Benavides (KTM) pulled off a huge penultimate stage win in the 13th of 14 stages and entered the final stage 12 seconds behind on his KTM teammate Toby Price. The Australian Price was aiming to become only the seventh rider to earn at least three overall wins in the Bikes class. However, Benavides rode excellent down the homestretch, as he also claimed the win in the final stage of the event, giving him the overall event win. The South American claimed the 2021 event win aboard a Honda CRF450 Rally and now claimed his second Dakar Rally overall win aboard a KTM 450 Rally.

“It’s been an amazing day!” Benavides said. “I just focused on every kilometer from the first to the last. I didn’t think about the position or the result I just gave my 100 percent over the whole stage and tried to enjoy the day. The special was really fast and tricky, and so muddy – thankfully I didn’t make any big mistakes, but it would have been easy to have an issue out there today. I have worked so hard for this. This year’s rally has been one of the closest ever and there wasn’t a single day where you could afford to ease off. I couldn’t have done it without the support of my team, and all my family and friends. It’s going to take a little while to sink in, I can’t describe this feeling right now.”

And the final stage was anything but easy, as you will see in the video below.

🤎 Things got kinda muddy before the end 🏁#Dakar2023pic.twitter.com/zNNYUHSTzz

Price finished 43 seconds back of his teammate, which, according to the series, is the smallest gap from first to second in event history.

“So, so close,” said 2016 and 2019 event winner Price on his ’23 runner-up finish. “Yeah, a great job from Kevin, he did really well today. I knew it was going to be tight, and of course I pushed right from the start all through the stage. I just missed three waypoints by virtually meters, and it dropped me back. Obviously, the goal is to win, and it’s frustrating to miss out by such a narrow margin. But I’m fit, healthy, and I’m going home with a trophy, so that’s the most important thing. I’m ready for another one next year.”

Skyler Howes, who went from privateer competitor a few years ago to a more than capable race leader, led for a total of six stages in this year’s event. The American had this moment halfway through the event, when his front end hit some soft sand upon landing.

“I am so happy! It’s been an incredible race with highs and lows, and it’s come right down to the wire on this final day,” Howes said in a Husqvarna statement. “I knew the guys behind me would be pushing so hard today, and to go into this final day less than two minutes behind after well over 40 hours of racing is incredible. I arrived at the finish safely, and it feels like a dream come true and such an honour to share it with two legends like Toby (Price) and Kevin (Benavides). Everyone knows what you have to go through to get to this point, and after all that hard work, it makes this moment feel so sweet. Of course, I want to come back and see what the other two steps of the podium feel like. But to now be one of five Americans to reach the podium at Dakar, it feels amazing.”

“I am quite happy to be able to finish this Dakar Rally 2023 in Saudi Arabia,” Quintanilla said. “Of course, this was not the result we were searching for but the feeling is good. I know that I gave one hundred percent every day so I just want to say I am thankful for all the support from the team and this doesn’t go only to the Dakar—it is a yearlong job. Sometimes you win, sometimes you don’t—it’s part of the race.”

“It’s good to be at the finish, I have to be happy even if this is not a dream result,” said Van Beveren. “To finish the Dakar Rally is always a victory and now I remember other times where I could finish due to crashes when I was at the hospital looking at the other on TV. We had a really strong race, I have to remember that. I can’t point out one big mistake I made, the race was a sprint almost everyday.”

Luciano Benavides, Kevin’s brother, finished sixth overall aboard a Husqvarna. Daniel Sanders suffered a big crash at the 2022 event and claimed second in the final stage of this year’s event to finish seventh overall.

“It was going to be difficult today to make up any time but I did what I could and just missed out on the stage win, but overall, I’m super happy,” Sanders said in a GasGas press release. “It’s been a long road to get here. After crashing here last year I’ve had six operations, which really limited my preparation, so it’s been great to bounce back and be competitive. It’s been an unreal experience and hopefully next year I can come in stronger and fitter and be more ready to go. The team has been amazing as always and I’m super happy to be here at the finish line in one piece.”

Sanders on the gas.

Ricky Brabec, who in 2020 became the first American to win the Dakar Rally, took a stage win and early race lead. Unfortunately, Brabec suffered a crash and had to be rescued by helicopter. Initial checks confirmed he had “no fractures or other severe condition,” but Brabec posted to Instagram U.S. doctors “discovered T1 and T2 broke but stable condition, and a disc pushing close to the spinal cord.” His result shows as a “Withdrawal.” In a previous post about his crash, the American ended his caption with:

“I want to leave a special word to our rider Ricky Brabec, who had to leave the rally after a crash. Monster Energy Honda Team is proud of him and thankful for all his efforts. He is a great rider - for sure one of the best - and a good person. So we wish him a full and speedy recovery!”

Watch the recap of the final stage and overall finishing position in the video from NBC below.