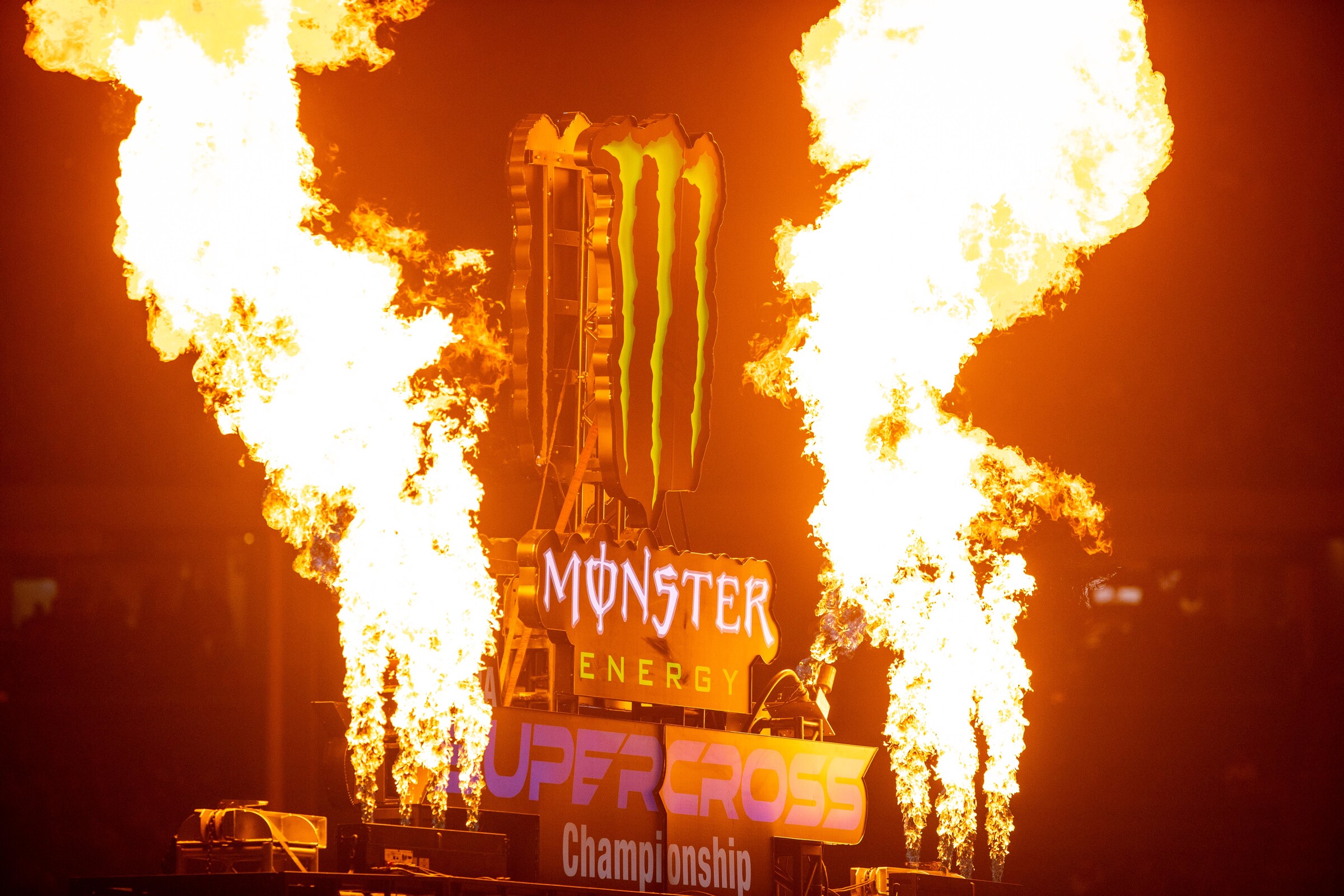 While the following information about the venues remains the same, the dates for SMX playoff rounds has been adjusted. Read more on the new dates.

It is finally here. Tomorrow is the Anaheim 1 Supercross, which kicks off not only the 2023 Monster Energy AMA Supercross season, but also the all-new SuperMotocross World Championship (SMX). With the announcement of the all-new 31-race SMX championship, it was announced the third and final SMX championship round was set for October 14 at the Los Angeles Memorial Coliseum, but the first two SMX rounds were initially announced as TBD on venue and location.

The announcement also provided track layouts for these two races. The Chicagoland Speedway layout is similar to that of a Daytona Supercross or Atlanta Supercross (both at NASCAR speedways), but the zMAX Dragway has some unique features. The first SMX race in North Carolina will have a split gate start, with 11 competitors on each side of a massive straightaway where the two sides will join after two conjoining 180-degree turns. This event also appears to have two separate lines in the same section, as one line goes over an over/under bridge and a second line goes under the over/under bridge before the two lines return the track back together as one. As we have seen in the past, split lanes do not always work out perfectly as one usually ends up naturally being the faster line and heavily favored/used, but the execution of the creative layout might create more excitement in the action.

The following press release is from the SuperMotocross World Championship (SMX):

“The design from the get-go was to make sure that each part of the country was represented so fans would have an opportunity to experience SuperMotocross first-hand,” said Dave Prater, Vice President of Supercross, Feld Motor Sports. “It was important to have one playoff in the East, a second in the Midwest, and then the final on the West Coast making each round easily accessible to each region. zMAX Dragway, Chicagoland Speedway and the Los Angeles Memorial Coliseum all provide the perfect footprint to create world-class SuperMotocross tracks and a one-of-a-kind fan experience that will blend elements from both Supercross and Pro Motocross.”

zMAX Dragway is situated adjacent to Charlotte Motor Speedway in Concord, N.C. and is the world’s first four-lane dragway. Built in 2008, zMAX is considered the “Bellagio of Dragstrips” for its expansive layout, large capacity grandstands and 40 luxury suites. zMAX is going to provide a layout where our track builders can create lanes suited for grandstand and suite viewing while also allowing fans to “line the fence” as they typically would at an outdoor Pro Motocross event.

“Innovation and entertainment are at the core of everything we do, so adding a SuperMotocross event to our portfolio at zMAX Dragway just makes sense,” said Charlotte Motor Speedway Executive Vice President and General Manager Greg Walter. “Fans who visit us expect big action and big fun, and that’s exactly what SuperMotocross provides. We couldn’t be more excited to make some Playoff history in September.”

Chicagoland Speedway sits right outside of Chicago, Ill. in Joliet and will be easily accessible for fans traveling by car or plane with its central location and multiple airports. The 1.5 Mile D-shaped tri-oval Speedway sits on over 900 acres of land which will provide enough room for the track builders to get creative with the layout. Being a world-class facility, Chicagoland provides all the modern amenities motorsports fans expect when purchasing an event ticket. Chicagoland Speedway is no stranger to marquee events as they hosted Indy Car Series races for more than 10 years and NASCAR Cup Series races for nearly 20 years.

“As a proud partner of Supercross at Daytona International Speedway for over 50 years, we look forward to welcoming the first-ever SuperMotocross World Championship Playoffs to the Midwest at Chicagoland Speedway,” said Chip Wile, senior vice president and chief track properties officer, NASCAR. “With a thrilling season of motorsports ahead, we are excited to see riders return to Daytona and Chicagoland for intense two-wheel action this season.”

The best of both worlds, the SuperMotocross World Championship is going to boast first of its kind track designs that will utilize a unique combination of both Supercross and Motocross obstacles. Each track layout will be unique unto itself but include five fundamental, yet essential elements of both disciplines – big air, long rhythm sections, rollers, fast straightaways, and elevation.

The full 31-race SuperMotocross World Championship (SMX) schedule is below.

The SuperMotocross World Championship playoff races and final will operate under a two-moto format for both the 450cc class and 250cc class. Each moto will be 20 minutes, plus one lap, in which Olympic Scoring will determine an overall finishing position for which SuperMotocross Championship points will be awarded.

The SuperMotocross World Championship series will boast the sport’s largest payout of $10 million over the course of the full 31-event season. Prize money is being added to both the Supercross and Pro Motocross Championships, leaving $5.5 million up for grabs for the playoffs and final. A guaranteed $1 million will go to the 450cc champion and $500,000 to the 250cc champion.