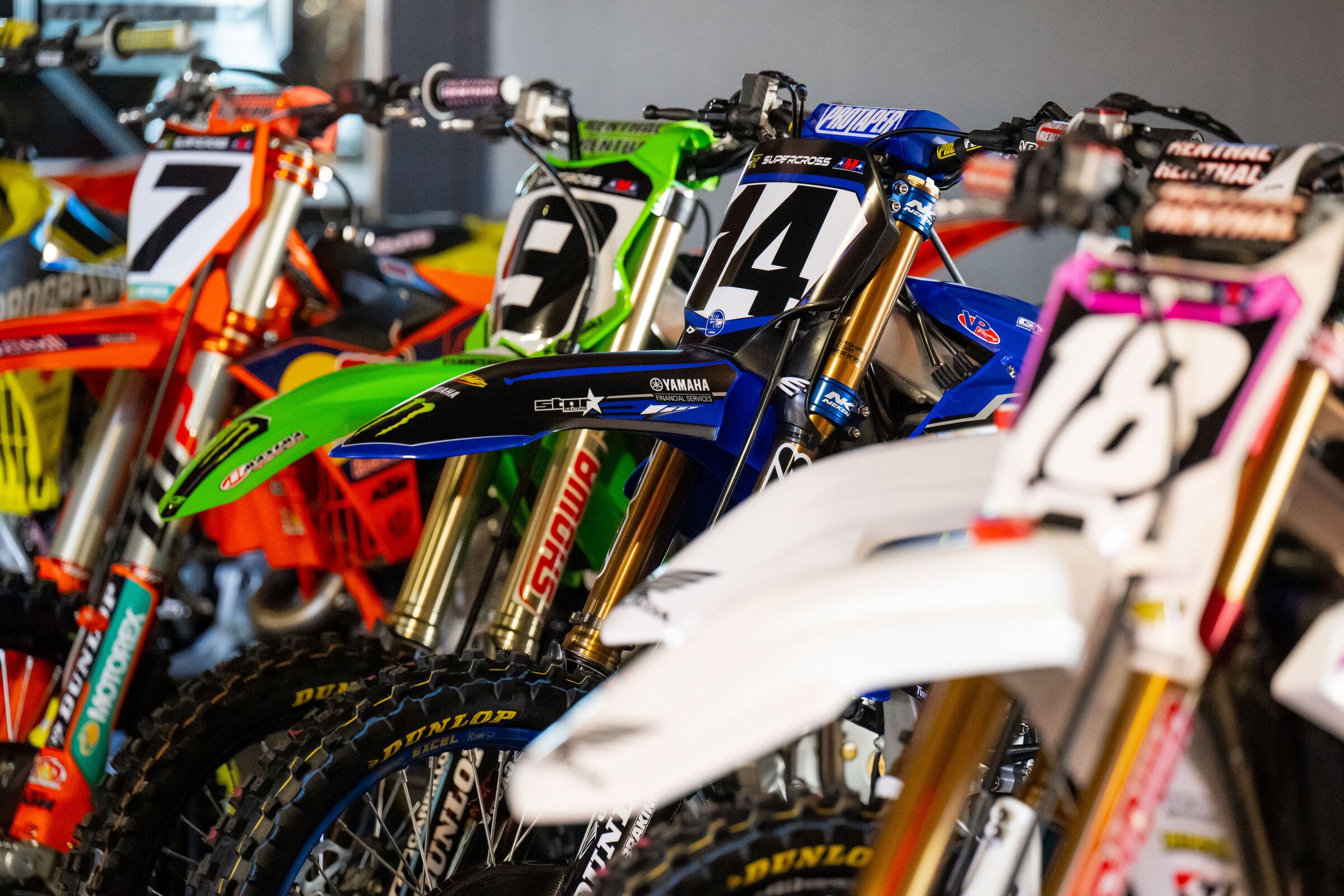 The biggest story of the off-season was without question, Ken Roczen’s free agency and eventual signing with Progressive Insurance ECSTAR Suzuki (one of two teams under the HEP Motorsports Suzuki umbrella). It was an interesting move—most didn’t expect Roczen to choose a bike that hasn’t seen much in the way of updates in recent years—but then again, Roczen’s been deadly on a Suzuki in the past. He’s also very, very good at the season opener, having won it four times in the 450SX Class, one of which was on a Suzuki. No matter what happens it’s going to be extremely interesting to see how his first outing on the yellow machine goes. If things go well, his bike won't be the only thing he's kicking in Anaheim. -Aaron Hansel

You could use that expression in a lot of different ways when talking about Justin Barcia, but in this case we’re talking about how good he always is at the season opener of Monster Energy AMA Supercross. He won it three times in a row (2019, 2020, 2021), and was still on the podium with third place finishes in 2018 and 2022. Barcia is always ready to go for the first gate drop, and this season there’s no reason he won’t be fighting for the win yet again. Will his speedy streak persist this Saturday? -Hansel

Dylan Ferrandis didn’t have much of a season to speak of in 2022. He left supercross early with an injury, then was forced to pull out of the AMA Pro Motocross Championship before they even started with a torn ligament in his thumb. He tried to come back for a few races at the end of the season but pulled right back out after sustaining a lower back injury in a dustup with Barcia. Well, Ferrandis is back now and will by vying to compete for the only American title he hasn’t won yet. He’s shown speed in the past, but his results were frequently limited by poor starts. If he’s got that figured out, he could be dangerous in 2023. -Hansel

Like Ferrandis, Adam Cianciarulo didn’t get a lot of gate drops last year. He injured his shoulder before the start of the season, which contributed to a crash and subsequent ACL tear in just the third round of the series. Just like that, the #9 was done for 2022. The good news for Cianciarulo fans, however, is that no matter what happens, he never seems to be far from the action. Even last year he was getting good starts and led a few laps despite racing with a with a recent AC separation. He’s probably not going to come out and win this thing on Saturday night, but you can bet he’ll be good for some entertainment at some point! -Hansel

It’s weird to think of Christian Craig as a rookie. After all, he’s been around for over a decade and has logged plenty of races in the premier class, although the overwhelming majority of those were motocross races. A quick look at the Racer X Vault reveals Craig’s 450SX experience amounts to just 11 races, the most recent of which took place in 2018, so he’s far from a seasoned 450SX vet. In addition to making his rookie debut, he’ll also be making his first appearance with Rockstar Energy Husqvarna. We’ll see how this seasoned rookie stacks up when he begins his first official full season in the premier class. -Hansel

Colt Nichols is set to make his 450SX debut as he will line up behind an AMA gate for the first time since the 2022 Anaheim 1 Supercross. The 2021 250SX East Region Supercross Champion went to the 250SX West Region but suffered a gnarly crash in the whoops that resulted in two broken arms and burned backside, ultimately ending his entire season in just his first heat race of the year. Now, Nichols will debut in the premier class on one of the premier teams in the sport—Honda HRC. Remember, Nichols won the 2019 Anaheim 1 250SX main event. How does Colt 45 fare in his return to racing/450SX debut? -Mitch Kendra

Speaking of the 250SX West Region, the field appears solid in 2023. Jett Lawrence (2022 250SX East Region Champion) is a heavy preseason favorite, but there are other capable riders in the West Coast division. Race winners such as Austin Forkner, Cameron McAdoo, RJ Hampshire, podium finishers such as Pierce Brown, Stilez Robertson, and Mitchell Oldenburg, veterans like Phil Nicoletti, Cole Thompson, and a bunch of new, young talent such as Levi Kitchen, Enzo Lopes, Ty Masterpool, Dilan Schwartz, and more, will fill the starting gates tonight. So, who takes the main event win? How about the other two podium finishers? Can you name who will round out the top five with this busy field?! -Kendra

Monster Energy Yamaha Star Racing has claimed the 250SX main event win at the Anaheim Supercross opener in 2019, 2020, and 2022 with Colt Nichols, Justin Cooper, and Christian Craig, respectively. Now, the 2021 season started in Houston, Texas, but was won by Craig as well, so add another Star opener win. It was in 2018 when we saw a non-Star Yamaha YZ250F at the center of the podium at the opener as Joey Savatgy won that night on a Kawasaki KX250F. The factory Blu Cru team now has two youngsters in the field tonight in new signee Stilez Robertson and Levi Kitchen. Robertson has 10 250SX main event starts to his name, and Kitchen has just two 250SX main event starts to his name. Will we see Star Yamaha continue its streak of winning the opener tonight? If so, will it be Robertson or Kitchen keeping the streak alive? -Kendra

Marvin Musquin is back for another supecross-only deal with Red Bull KTM and is entering what might be his final season racing as a pro. Musquin claimed fourth at the 2022 season opener and claimed his tenth premier class main event win at the St. Louis Supercross in April before finishing in fourth in the standings. The French native won the A1 450SX main event opener in 2018. Could the #25 start his final season off with a bang and win big tonight? -Kendra

On a track layout busier than most season openers, one big takeaway from the expected layout that could be a big factor tonight come the main events is the split starting gate. An over/under bridge separates the field of 22 riders into 11 on one side and 11 on the other. So which side is better? Each rider will have preferences to where they would like to start, but unless they qualify well and win/or finish in the top few spots of their heat race, they might not have the chance to decide themselves. Remember, we saw a split starting line like this at the 2022 Glendale Supercross. That event was a Triple Crown, so riders could change their gate selection for each main event, but tonight is a regular single main event format. Watch for riders to find a preferred gate early and stick with it all day or the exact opposite: test stuff in their heat race so they are in a more desired spot come the points-paying main event. -Kendra

Watch the video our guy Donnie “Roto Moto” Southers did with Rick Johnson and Jeff Ward where the two former champions spoke about their thoughts on the track layout for the opener.