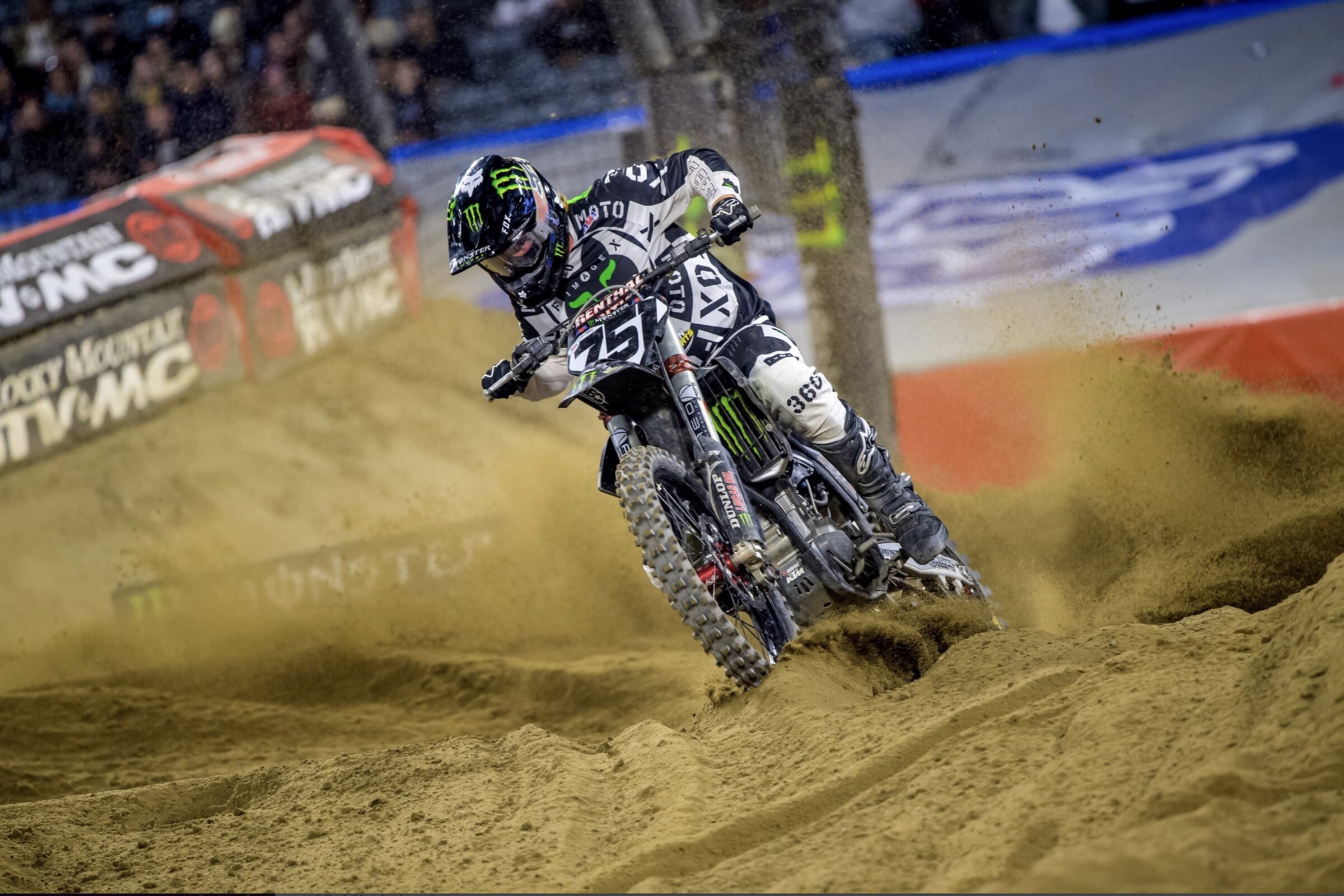 Nearly a decade ago American racer Josh Hill came remarkably close to winning the 2013 Terex Australian Supercross Championship. As a member of the Dodge/Sycuan Casino/Suzuki RCH Racing Team, Hill was flown Down Under to compete in the six-round series. If not for a takeout move executed by one Jake Moss in the very final round of the series at the Toowoomba Royal Showgrounds, Hill, who was in command of the series, would have won but lost out on the title to Jake Moss. But that was then, and this is now and this afternoon outside of Charlotte, North Carolina, Hill was packing his gearbag up to make a 22-hour flight to Newcastle, NSW, Australia and McDonald Jones Stadium and the third round of the 2022 FOX Australian Supercross Championship. Set to replace injured rider Luke Clout of the CDR Yamaha race team at Newcastle, the lengthy jet set journey to Australia marks yet another racing and freeriding adventure for a competitor who has been at it now for well over 16 years. As you’re about to find out, it has been a remarkably busy 2022 for the racing veteran out of Yoncalla, Oregon and a 2022 that shows no signs of slowing down. As a matter of fact, as of this very week, it was announced that Hill will join his racing brother Justin in the 2023 Monster Energy AMA Supercross Championship as a member of Team Tedder/Monster Energy/Mountain Motorsports/KTM Racing. So, with all of this going on and with a long ways to go and a short time to get there, on Wednesday afternoon we rang up Josh Hill. Packing his gearbag in a rush to make it on over to the airport for a 22-hour flight, Hill took a quick break to let us in on just what in the world he had going.

Racer X: Josh, how in the world are you?
Josh Hill: I’m doing good, man. I’m doing good. I leave for Australia tomorrow and I’m just getting ready. I rode today and I’m just getting packed up. Life is really good. I did the World Supercross Championship and then I ended up getting called to race the Australian Supercross Championship after round one. Luke Clout had an injury where he broke his thumb and was out, so Craig Dack asked me to race the round at Adelaide the last weekend in October. Luke isn’t quite healthy yet, so the team is having me come back for the next two races in Newcastle and Wagga Wagga.

I know you’ve competed in Australia before. Just how do you like racing down under?
Yeah, I’ve actually spent a lot of time in Australia. I did the whole season back in 2013 and then I did the last three rounds in 2018 for CDR when they had the AUS-X Open. I stuck around that year and then I went to a race they had just outside Sydney, Australia and then they had a race in Auckland, New Zealand and I competed in that one. I mean I probably would have kept going back every year if it would have come around. I’ve really kind of found a home for myself over at CDR Yamaha team. Craig Dack and Brad and all of the guys there are just a rad group of people, and we get along good. Anytime I get the call that they need somebody, they usually give me a couple of months of heads-up so I can get myself in race shape. It’s a fun deal. I love going over there.

Two-thousand twenty-two has been a busy as well as a comprehensive season of both racing and free riding for you, hasn’t it? I mean you’ve competed in the Monster Energy Supercross Championship, the FIM World Supercross Championship, the Australian Supercross Championship and even the Red Bull Imagination freeride stuff. Man, that’s a full plate, my friend.
Yeah, I found my niche and I love freeriding and I love capturing that and trying to make some videos and doing some video parts and everything. That’s really kept me going during the down time of racing, you know? It is really hard to be a racer and rely only on that income for your life. It’s a stressful way to make a living. It’s cruel, you know? Most of the time I’ve gotten hurt on the motorcycle has always been in a race or practicing for a race. Racing is grueling. I still absolutely love racing, and there is no feeling like it in the world when you’re hitting all of the biggest jumps and all of that. And all of the freeride stuff is so fun and it’s rewarding in its own way, but there is nothing like winning a race or getting on the podium at some big international supercross. That feeling is unmatched. I’m just stoked that I get to keep doing everything I love, and I get to freeride and I kind of get to pick my own schedule these days. Now I’ve also got this opportunity to race for the Tedders in 2023, which is amazing. They also hired my little brother Justin. We’re going to be teammates for the first time in our lives and that’s pretty exciting. Justin is going to do the entire series and as it looks right now, I think I am slated to do 10 rounds. That way I still have time to break away and go do some of the freeride projects and the stuff that I want to do. I don’t see myself as being a championship threat anymore with the racing, but I still think I’m a top 10 guy, especially having the off-season that I’ve had this year. I’m excited for 2023. I think I’m still competitive and not being at every single race is going to make or break the season for me.

Team Tedder/Monster Energy/Mountain Motorsports/KTM Racing is an established and well-funded racing team with technical support from KTM. Can you guys be competitive in 2023 supercross? Can you run up front?
I think they give us competitive equipment. The thing about Tedders is that they are all in. Sometimes when you ride for smaller teams, you can cut corners. Certain things can go on the motorcycle that are not necessarily what works best because they can get some funding out of it. Sometimes it can be just free parts. With the Tedders, they’ve been around long enough, and they’ve got access to a lot of good equipment. They’ve also hired Sean Bell, who was my mechanic and my brother’s mechanic at Pro Circuit when he won the championship. Most recently, he was with Justin Barcia at Factory Yamaha for quite a few years. Having him around and having his knowledge is super-helpful. The whole program, I think, is going to be really solid. It’s a family owned and operated team, right? That’s why they do this. They’re a family that loves going to the dirt bike track. That’s’ what brings them back every year. Having that aspect of it is a little bit different; it’s a little bit more laid back than your standard race team that’s out there just to make a profit and to make waves. It’s exciting. It’s cool. I’m really stoked that I found this home here in the States. It’s a little bit weird juggling Yamahas in the World Championship stuff and then the KTMs Stateside, but it is fun. It’s a cool opportunity.

The freeride stuff and the Red Bull imagination stuff, how do you like doing that stuff? I’ve known you since you were racing 85s at Loretta Lynn’s and all along the way, you’ve always had your eye on the freeriding as well as some of the more outlandish jumping stuff. Can you talk about that?
Oh man, I really enjoy going over to these other countries and doing races and the coming back and doing this freeride stuff. Tyler Bereman, he’s been around since the Glamis days. He’s just one of the boys. When he was putting on an event, I definitely had to be there to show support. It’s just cool to be involved in this stuff. It’s cool to see it sort of evolving, you know? It’s just fun. It’s fun to do all of this stuff. I thoroughly love and enjoy riding bikes. I probably eat, sleep and breath motorcycles as much or more now than when I did when I was a factory racer.

Are you looking forward to these Australian Supercross Championship races and how do you think you’ll do down there?
Yeah, at the last round at Adelaide I came from way back and ended up getting third to winner Aaron Tanti and Justin Brayton. That was good. I was excited about that. We’ve got some more rounds and it is fun going over to these races because you never really know what to expect. Sometimes they’ll build the tracks really technical and then sometimes you show up and it is a little bit of a dumbed-down supercross track that’s a little bit easier for some guys. Every time you show up, you don’t necessarily know what to expect out of the track. It’s cool and they’re always throwing you curveballs. For me, I always try to be as adaptable to the circumstances and I just try to get better as every race goes on.

You’ve got a lot going on Josh. Freestyle motocross, freeriding, film, travel, motocross, supercross, what a cool way to make a living on a motocross bike, huh?
Yeah, it’s awesome. The cool thing is that I get factory support in this World Championship stuff on the Yamaha. I get the closest thing there is to factory support without being factory on the Tedder team. I’m not confined to one motorcycle. When I’m seeing some new and intriguing electric bike, I’m able to go and test that and give my two cents on the development of those types of projects. Yeah, I’m really just blessed to have so many good sponsors like Monster Energy, FOX, Mountain Motorsports and I’m living in this YouTube and social media era where I’m able to capture these things myself and show them to the world because with all of that, my lifestyle wouldn’t really be possible.

It IS a lifestyle, isn’t it?
Man, I just never stop! It’s funny. I don’t do the full supercross series or the whole outdoor series every year, but my schedule is jam-packed. It seems like every couple of weeks I’m flying to go do something else in some other part of the world. It’s just cool to see motorcycle riding and supercross and whatever just thriving all over the world. I’m packing up for a big trip EJ because I fly to Australia and I’m there for about 12 days and I then I go straight from there to California and start testing on the Tedder equipment.