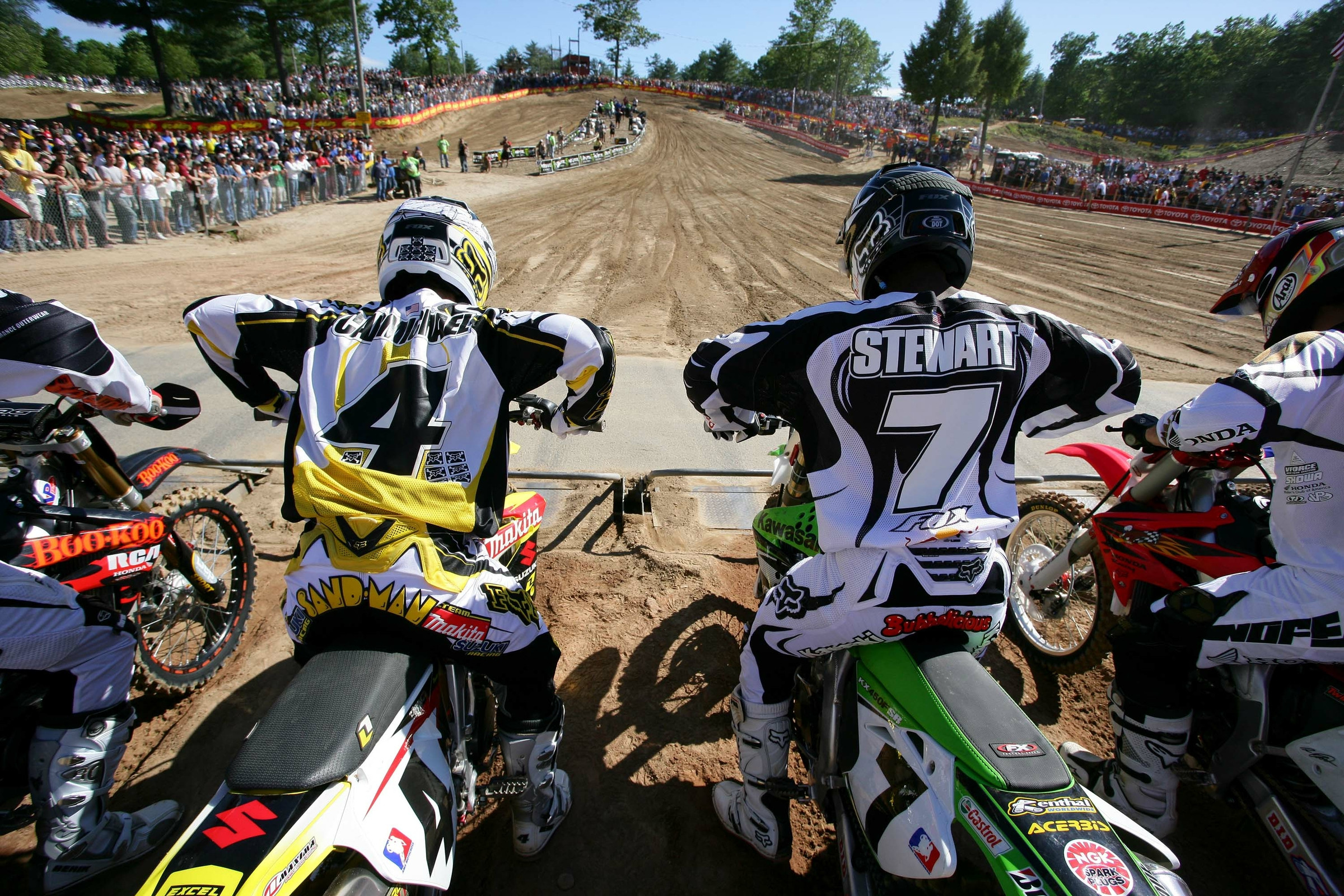 The MAVTV+ 50-Day Countdown to the 2022 Lucas Oil AMA Pro Motocross Championship hits 2006, as we go over each year of the series’ history, beginning with 1972. The 2006 season would be the one where 450 four-strokes took over, with superstar contenders on each team ditching their familiar two-strokes. The riders up front, though, didn’t change.

It started in the previous year when Ricky Carmichael won the AMA 250 Supercross Championship on a two-stroke Suzuki RM250, then switched to a RM-Z450 four-stroke and dominated the AMA Motocross Championship as well. RC stuck with the 450 for the off-season U.S. Open, indicating he would stick with the 450 for ’06 supercross. Chad Reed elected to do the same, switching from the YZ250 he raced in ’05 to a YZ450F indoors in ’06. The biggest story, though, was that Kawasaki finally had a 450 of its own, so James Stewart would finally get a shot on one. In the December ’05 kickoff to the 2006 season, the Toronto and Vancouver, Canada, World Supercross Grand Prix rounds, Stewart showed up with a new number, seven, leaving his trademark #259 behind. He also had “New Beginning” on the back of his pants, and it looked that was as he blew everyone away at the first race in Canada.

The world couldn’t wait to see Stewart versus Carmichael in supercross in 2005, but they barely got it since Stewart broke his arm in the second race of the year. The 2006 campaign would be a rematch, and what a match it was, as Carmichael, Stewart, and Reed exchanged amazing races and bad moments as a trio, leading to wild swings in points. Carmichael held a big points lead at one point but had two uncharacteristically bad races, one where his shock spring broke, leading to a DNF, and another when he went flying off the track and nearly hit a boat parked there for promotional purposes. This put the whole thing in play at the finale, with Reed and Carmichael tied for the points lead coming into the finale, and Stewart just a few points back. It was high pressure and high drama in Las Vegas, where Stewart jetted away with the early lead and the race win. It would come down to Carmichael needing to finish second and beat Reed to notch the AMA Supercross Championship, and he did so. By the slimmest of margins, Carmichael had won his fifth AMA Supercross Championship in six years. He also announced it would be his last season pursuing titles.

The AMA Motocross Championship had hype, too, because Stewart was now armed with that 450 to battle RC outdoors. They didn’t disappoint, as in the first moto of the season at Hangtown they were both down early and raced through the pack together, passing just about every rider on the track, except Reed, who was holding the lead. On the last lap, Stewart passed his old rival to take the moto win. Carmichael took third, then bounced back to blow everyone out in moto two.

Carmichael and Stewart were putting new speed limits on the series with their early 450 battles, but it ended badly for Stewart when he crashed super hard on High Point’s downhill double. They battled again at Southwick only for Stewart’s bike to blow up, causing another spectacular endo. The bumps and bruises slowed James for awhile and it was clear Carmichael was headed to yet another AMA National Motocross Championship, his tenth straight. He won six nationals in a row after that Hangtown defeat.

The battles weren’t over, though, as Stewart got healthy again, leading to more amazing races. At Washougal, for example, they were smashing each other the whole way. Carmichael grabbed the lead late and had victory in hand until he went flying off a jump and crashed, Stewart snuck by and grabbed it. At the next race at Millville, Carmichael accomplished something remarkable: in a muddy second moto, tons of riders, including Stewart and Reed, got stuck on slippery hill. Carmichael kept charging, and by the end of the moto he had lapped every single rider in the race!

The Carmichael/Stewart battles were fun to watch, as was another rivalry that was boiling over in the 250 class. Mike Alessi was in the hunt for the title in his 2005 rookie season, but his whole year was overshadowed by his attempted take down of Ivan Tedesco in the final race of the year. He was ready to right the wrongs in 2006, winning early and building a big points lead on his KTM 250SX-F. Then suddenly, he got blindsided by an old foe, quite literally. At Budds Creek, Ryan Villopoto, long the second-place guy to Alessi in the amateur ranks, found another gear and tracked Mike down for the lead. When he had an opening, he didn’t just pass Alessi, he put him on the ground. Just like that, the power had transferred. It would be Alessi trying to catch Villopoto, after a childhood that played out the other way around.

Villopoto, armed with a potent Monster Energy/Pro Circuit Kawasaki KX250F, proved unstoppable for most of the summer, and he won the title in his first full professional season. If the motocross world was wondering who could take the place of the Reed/Stewart/Carmichael group down the road, they had just been given a glimpse.

At the final race of the year at Glen Helen, Carmichael and Stewart battled hard again, but Carmichael crashed and suffered a shoulder injury, rare moment for a man who had won all 10 championships he attempted. Stewart won the overall and would have to carry the mantle for Team USA at the Motocross of Nations, as Carmichael’s shoulder would prevent him from racing. Because Suzuki had prepped an RM-Z450 for the race already, Carmichael’s teammate Tedesco was given the spot, but Tedesco had missed all of the nationals with an injury and wasn’t fully in shape. Villopoto got the 250 spot.

Second and third in the 450F class would go to Kevin Windham and Davi Millsaps, respectively.

The team came through and Team USA grabbed the Chamberlain Trophy for the second year in a row. Villopoto was darned good in his first-ever appearance, taking the MX2 class overall over Europe’s MX2 master Antonio Cairoli. Tedesco led a moto but eventually faded. Stewart had pressure on his shoulders, as he was pitted against the Europe’s King of Motocross, Stefan Everts. In a high-profile moment, Everts passed Stewart and beat him in the final race of the day. Was Stewart going all out to win the moto or riding safe to protect Team USA’s win? It’s the stuff of bench-racing legend. Everts, meanwhile, was going out on top, winning both MXoN motos in his final season as a full-time racer.

Carmichael’s time was coming, too. We’ll cover that in 2007, a season that got truly wild.