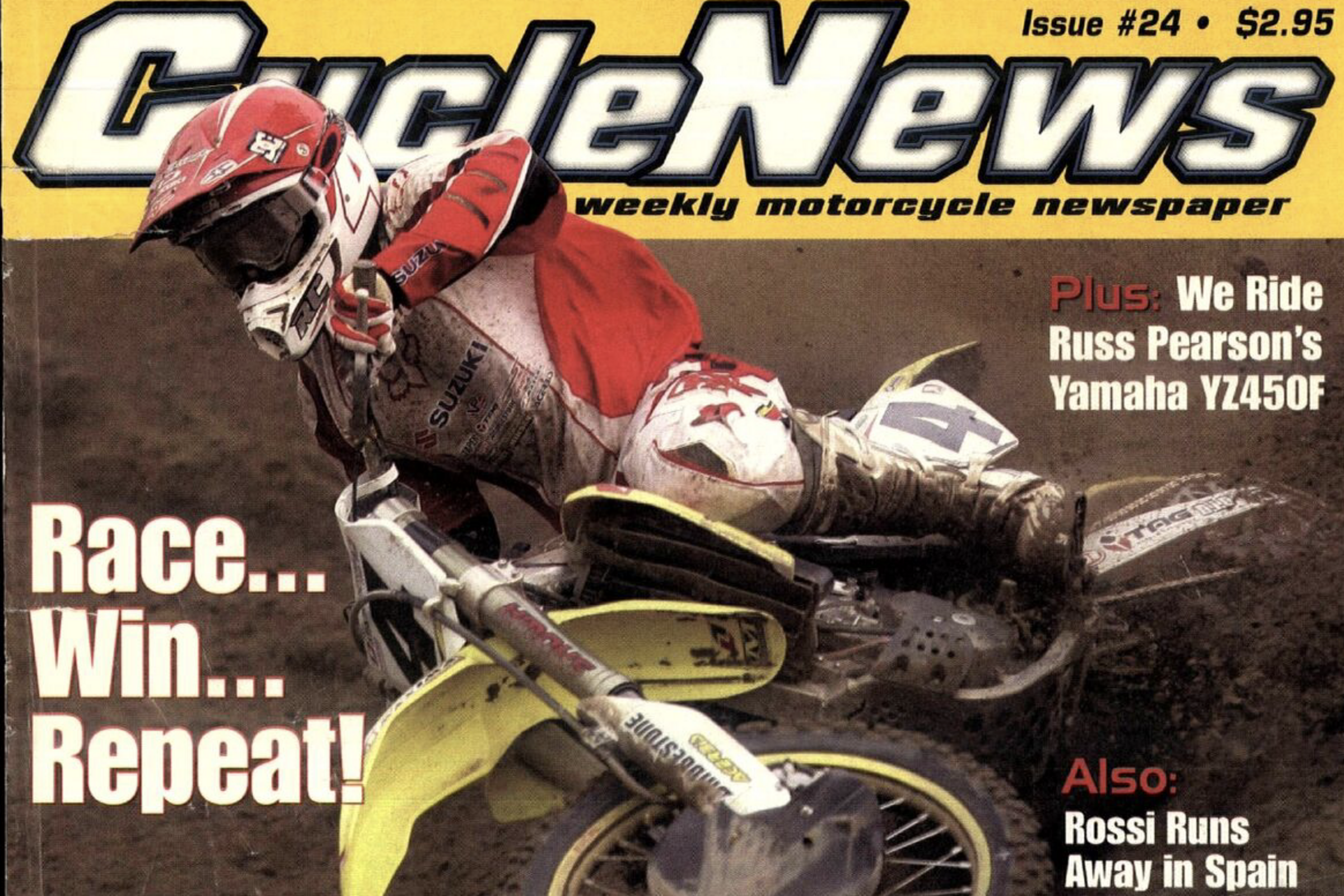 The MAVTV+ 50-Day Countdown to the 2022 Lucas Oil AMA Pro Motocross Championship has now reached 2005, as we go over each year of the series’ history, beginning with 1972. The ’05 season began with “the perfect storm” in supercross, but ended with another couple of brushes on the canvas that was Ricky Carmichael’s masterpiece of a career.

The 2005 season was set to be the confluence between the existing establishment and the future. Carmichael had surrendered his SX title in ’04 because of a knee injury, but then he returned to AMA Pro Motocross and laid a 24-0 motocross ass-whipping on the rest of the field in what was his second perfect season. He had also announced before MX even started that he was leaving Team Honda for Suzuki, as he felt he was not getting the respect he deserved from the Big Red Machine, though in their defense he did have a major knee injury.

Carmichael would be joining Suzuki and returning at a time when Yamaha’s Chad Reed had taken over as AMA Supercross Champion, and the much ballyhooed James Stewart was moving up from the 125 class to the premier class. Stewart was on the cover of Racer X Illustrated vowing, “My whole life is about January 8,” the date of the Anaheim opener. Even Jeremy McGrath and Travis Pastrana were coming out of their unrelated hiatuses, McGrath having retired at the end of the ’02 season and Pastrana having been injured almost constantly since his rookie year. The supercross organizer’s PR team called it, “The Perfect Storm,” an ode to the writer Sebastien Junger’s powerful book and movie of a deadly Nor’easter storm.

What 2005 turned out to be instead was arguably the most underrated performances of Ricky Carmichael’s career. On a new team, with two new bikes—the Suzuki RM250 for AMA Supercross and the Suzuki RM-Z450 for AMA Pro Motocross—Carmichael won both series. It marked the first (and only) time in AMA history that a rider won a major title on both a two-stroke and four-stroke motorcycle in the same year, as well as his ninth straight AMA Pro Motocross Championship, this one aboard his third different brand. And when the outdoor series started, Carmichael again was unbeaten in the overall tally, winning all 12 rounds and extending his winning streak to an astonishing 27 consecutive nationals, going back to July 2003.

And when all was said and done he went to France and led Team USA to its first Motocross of Nations win since 2000, and then he won the U.S. Open of Supercross for good measure. It was an epic year in an epic career full of years like this.

Back to that original perfect storm. Carmichael did not win that race, nor did Stewart, nor Reed, nor even McGrath nor Pastrana. Instead it was Factory Connection Honda rider Kevin Windham who won in a mudder, one of the biggest wins of his career. Stewart ended up breaking his arm in practice at the second round in Phoenix, and would not be able to show his true potential on a KX250 until the Dallas round. McGrath and Pastrana were just participating by this point. And Reed would come on stronger later in the series, winning a total of five rounds, and he would finish second to Carmichael in the championship. He would also play a small role in history when he won the season-ending Las Vegas SX on his Yamaha YZ250, as it would mark the last win for a two-stroke in AMA Supercross competition (to date, anyway).

While Carmichael was trouncing the 250 nationals outdoors on his yellow 450, poor James Stewart was stuck on a KX250, as Kawasaki had not gotten their own 450 to the races yet. He was obviously and notoriously underpowered outdoors and suffered a few epic crashes as a result of over-trying on the 250. One of Stewart’s most notable, and infamous, crashes came at Unadilla. Carmichael had fallen but was closing back in late in the race, and eventually made the pass for the lead on Stewart. When Stewart tried to retaliate on a downhill jump he landed on top of Carmichael and they both went down hard. Stewart was knocked out, while Carmichael was able to remount (and eventually take the overall win), but it was Windham who won the moto. Fortunately for Stewart, the Kawasaki KX450F would be ready by the end of the year and he would go into ’06 with a much different mindset.

In the 125 class, which had been dominated by Stewart for three years, there was a flurry of fast young talent that began making names for themselves as the transition to 250Fs was almost complete. Suzuki’s Broc Hepler, Honda’s Andrew Short, and Red Bull KTM’s Mike Alessi were all working their respective ways into the winner’s circle for the first time. There were challenging older winners too, like former champions Grant Langton and Mike Brown, KTM’s veteran Nathan Ramsey, and Monster Energy/Pro Circuit Kawasaki rider Ivan Tedesco. It was Tedesco who found himself pitted against Alessi in the end for the 125 Pro Motocross title, and it all came down to the very last moto at Glen Helen Raceway. That’s where and when Alessi decided to go for broke in the second moto, literally T-boning Tedesco on the first lap of the second moto and then frantically trying to keep Ivan from getting his bike back up and running. It was the first of many odd decisions for Alessi in the course of his professional career, and he would never fully live it down.

When the season ended, as mentioned above, Carmichael led Team USA in the MXoN in France to victory, flanked by Windham on the 450 in the MX3 class, and Tedesco in MX2.

Finally, in October, Carmichael entered the U.S. Open of Supercross on the RM-Z450, marking the first time he would race a supercross on a four-stroke. He won, rounding out his superb ’05 season and marking a giant paradigm shift in supercross, as 2006 would soon start with all of the real contenders aboard 450 motorcycles. Reed’s Vegas win back in May ’05 was the end for the 250s, a process started back in 1997 when Doug Henry lined up on that prototype Yamaha YZM400.