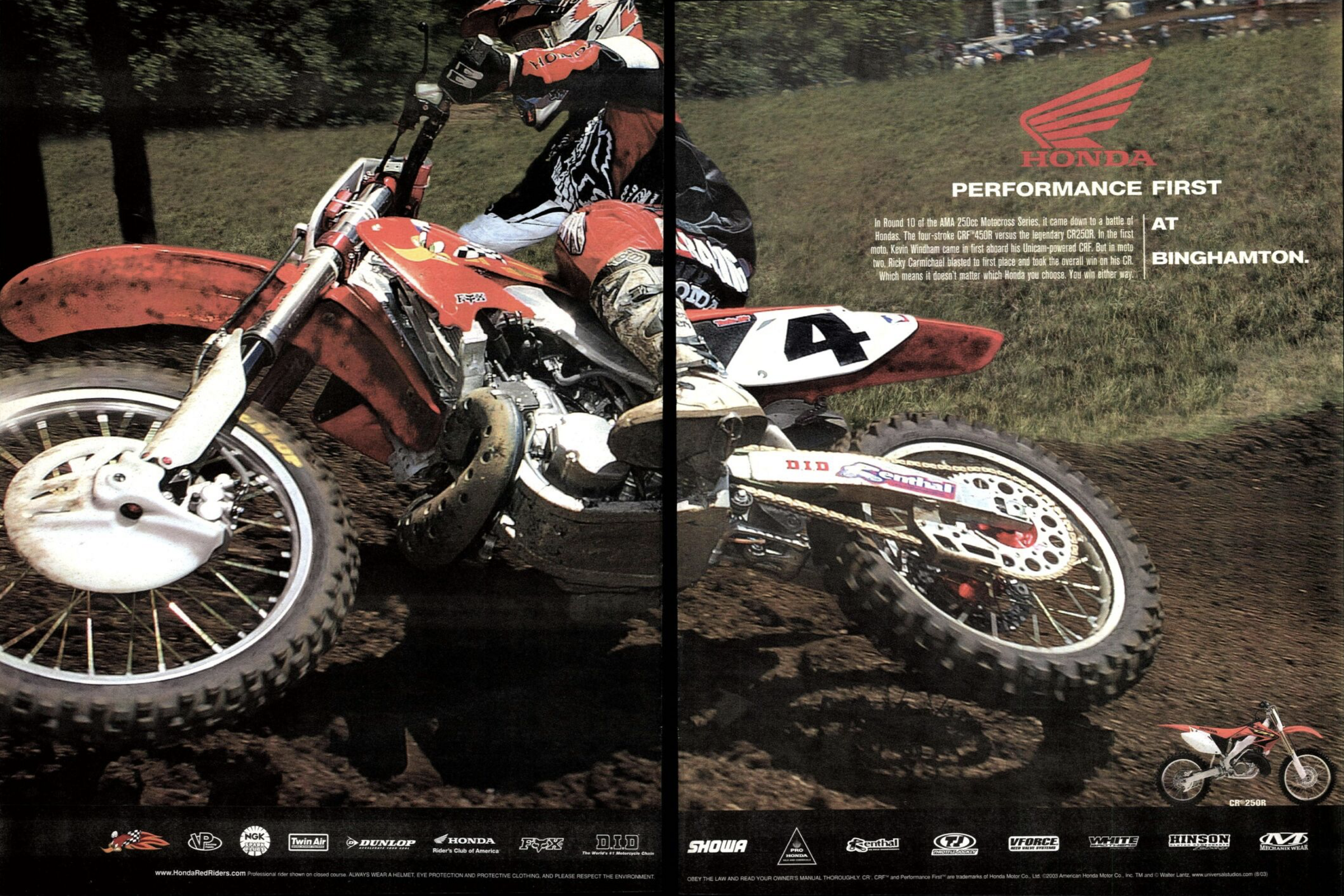 Today, we’ve reached 2003 in our MAVTV+ 50-Day Countdown to the 2022 Lucas Oil Pro Motocross Championship. With the series celebrating 50 years of AMA Pro Motocross this summer, we are counting down each of the years in series’ history.

After Ricky Carmichael reeled off a second straight AMA Supercross Championship in 2002, as well as a perfect 24-0 summer in outdoor motocross, the Honda rider came into 2003 feeling quite confident. He had usurped Jeremy McGrath as the new dominant rider in SX, and his outdoor prowess was unchallenged. And while McGrath was winding down his career with a brief misadventure with KTM, Yamaha had replaced him with Australia’s Chad Reed, the 2002 AMA 125 East Region Champion while riding for the late Phil Alderton’s Yamaha of Troy team.

Reed hit the ground running in SX ’03, winning the Anaheim opener—his first premier-class supercross win ever. Carmichael was right there in second, though it was obvious he was not pleased with the result. Ironically, despite winning a total of five AMA Supercross Championships, Ricky Carmichael never actually won the Anaheim opener.

The following weekend Team Kawasaki’s Ezra Lusk’s surprised everyone in Phoenix with what would turn out to be the last SX win of his career.

Finally, at Anaheim II Carmichael got to the winner’s circle, and would begin a tear where he would win seven times in eight rounds, blowing the title chase up for everyone else. Or so he thought. The last six rounds would be a revelation, as Carmichael seemed to lose a little bit of his mojo, and Reed caught fire. The Yamaha rider would win out the rest of the series, earning six straight victories while Carmichael finished second all six times. Making the numbers even stranger, RC’s Honda teammate Ernesto Fonseca would finish third in all six of those final rounds.

Despite all of the wins, Reed could not dig himself out of the early hole that Carmichael put everyone in, and he came just seven points shy of the championship. Carmichael proved masterful at managing the series, but he also realized that Reed was going to be a handful in the future.

In the 125 classes, James Stewart was going into his sophomore season. He dominated the 125 West Region on a Kawasaki KX125 while Suzuki’s Branden Jesseman won the first title ever for Fly Racing in the 125 East Region. But the final round in Las Vegas was hard on the two champions. Jesseman didn’t make it out of press day, as he snapped his wrist. And then James Stewart suffered a horrendous crash in the main event, knocking himself out and suffering a broken collarbone that would put him out of the first four rounds of AMA Pro Motocross, effectively ending his title defense before it ever really started.

With Stewart sidelined for the start of the 125 Pro Motocross Series, his title was up for grabs. Three seasoned journeymen stepped right up: 2001 AMA 125 National Champion Mike Brown, 2000 FIM 125 World Champion Grant Langston, and KTM veteran Ryan Hughes, who had actually announced his retirement the previous year but was back on the AMA circuit for the outdoor series. Pro Circuit Kawasaki’s Brown won the opener, with Langston second, and then Hughes won Hangtown, with Brown third. High Point featured an epic battle between Brown and Hughes that Brown ended up winning. But then at Southwick all three of the top contenders had injuries or breakdowns, so Brown ended up 10th, Langston 11th and Hughes 13th—and with a broken leg. The winner that day? Yamaha of Troy’s Craig Anderson, the second Australian to ever win an outdoor national.

Budds Creek was the fifth round, and the race became an instant classic when James Stewart showed up, his broken collarbone healed. He immediately made an impact, debuting his “scrub” move for the first time on Henry Hill (though the track was being run backward, or clockwise). He also went from dead last to first in barely half of the second moto.

Stewart would win the rest of the motos in the ’03 125 Nationals and it wasn’t even close. And as the front three continued having their problems, Stewart began cutting into the points lead. He was already 156 points down when he lined up for the first moto at Budds Creek and seemingly out of reach of the title, but as the wins piled up, people started wondering if he might actually catch all the way up.

But then something unexpected happened: The Little Miami River in Ohio overflowed its banks the first week of July and flooded Kenworthy’s MX Park in Troy, Ohio, which is right on the banks for the river. Kenworthy’s was to host their national on July 13, and the AMA was forced to instead postpone the race until September 7, following the Steel City round, which was supposed to be the 12th and final round.

While Stewart kept winning, the top three kept having their problems—especially at Washougal. First, Langston was involved in a chain-reaction crash at the end of the finish line whoops that took a bunch of guys out and left him with an injured wrist. And then Brown, who finished second in the first moto to Stewart, went down in a blind spot in the second moto and was hit by Ryan Hughes. The crash left Brown with an injured shoulder and effectively ended his title hopes. Stewart was now just 82 points out of the lead with four rounds to go.

Fast forward to Steel City, the next to last round. Stewart won, Hughes finished second, Langston fourth. At that point, with only the postponed Kenworthy’s race left to be run, Langston had a 7-point lead on Hughes with Stewart another 30 back. But before anyone could do the math to make plans for Kenworthy’s, it rained again, the Little Miami River flooded again, and this time the AMA was forced to cancel the race altogether and call it a season. Two years after a broken wheel robbed him of the title, Grant Langston claimed the 2003 AMA 125 National Motocross Championship—KTM’s first-ever AMA Pro Motocross title—despite the fact that he did not win a round of the turbulent 11-race series.

In the 250 class the only real drama was watching Carmichael race his CR250 against the revitalized Kevin Windham’s CRF450 four-stroke. For most rounds RC had him covered, but at Unadilla and Washougal everything went Windham’s way and he straight up beat the GOAT twice. After those two defeats, Carmichael would win the last three rounds and again clinch the title—his fourth 250 Pro Motocross title in a row and seventh counting his three 125 titles. Those three races were also the beginning of what was about to become the longest winning streak in motocross history, as Carmichael was not going to lose another outdoor national until the start of the 2006 season!

One other note: Carmichael’s win in the ’03 Steel City 250 National would mark the last win to date for a 250cc two-stroke motorcycle in the AMA Pro Motocross.

When the season ended Carmichael, Hughes and Yamaha’s Tim Ferry found themselves representing Team USA in the FIM Motocross of Nations in Belgium. It was there that Carmichael had his one true match-up with the King of Motocross, Stefan Everts, and while he beat his friend Everts in their personal matchup, it was Everts’ Belgium that won the Peter Chamberlain Trophy.