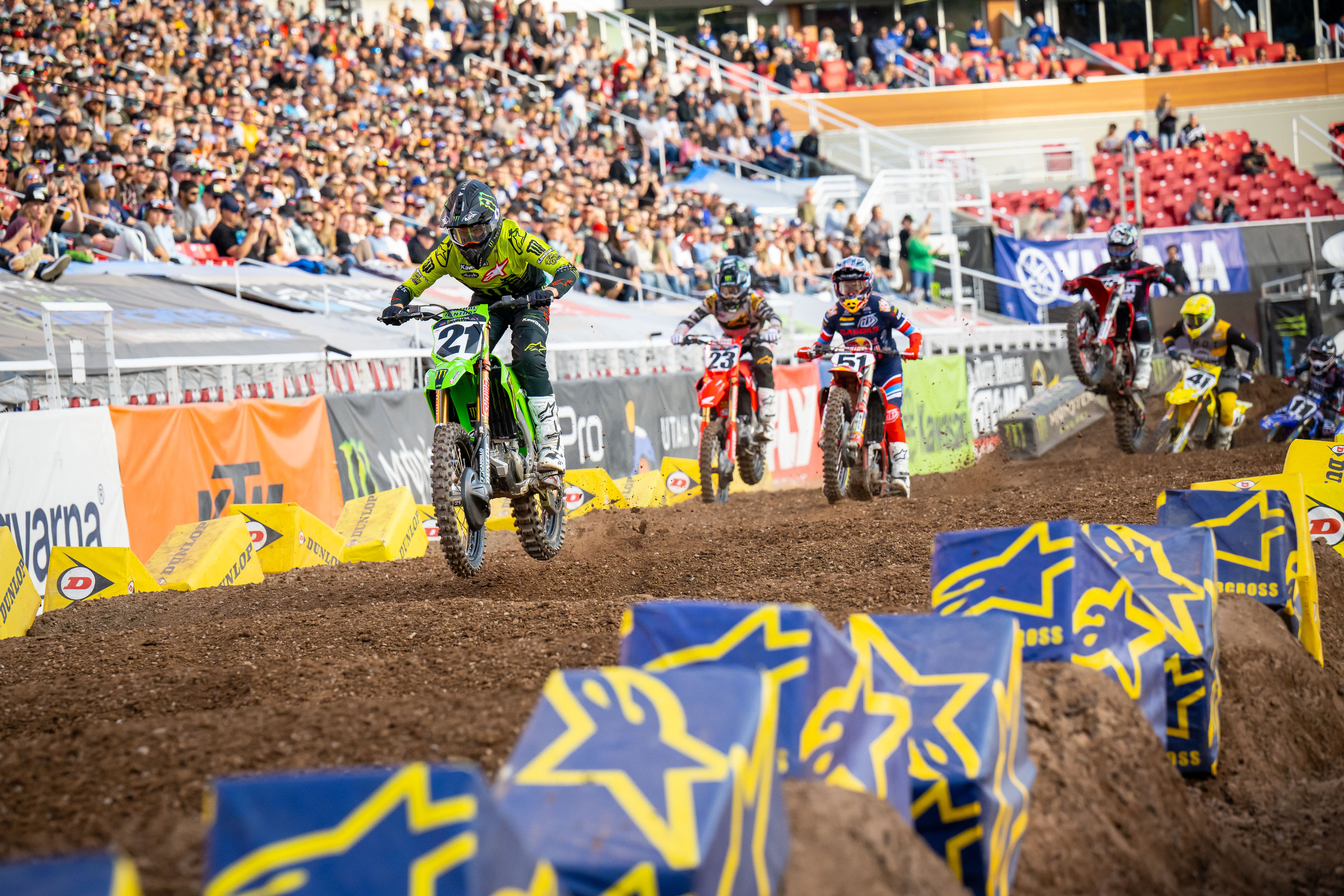 The final round of the 2022 Monster Energy AMA Supercross Championship has come and gone. Both classes provided several talking points from passes, crashes, track conditions, elevation, and privateers. As such, we fired off some questions to long-time professional racer Jason Thomas to get his take on all things Salt Lake City Supercross.

Jason Anderson ends this 2022 supercross season on a four-race win streak. Does that 1) Give him confidence heading into Pro Motocross? and/or 2) Solidify his name as a title favorite as we look a little ahead to 2023 supercross?

I would say both! I don’t think he will be able to mimic this SX success as we roll into summer, but he will still be feeling good about himself when the gate drops. It’s very difficult to keep that type of momentum going for multiple reasons including mental fatigue (being at peak performance takes a toll), lack of outdoor prep (he was concentrating on SX while others like Dylan Ferrandis were hammering outdoor motos), and I believe he’s simply better at SX (results also tell this tale).

As far as 2023 goes, he has to be in that conversation. He will have continuity on his side with a similar motorcycle and surroundings as well as the memory of 2022 to bolster his self-belief. I don’t think he will be “the” favorite, but his stock is surely selling at a premium.

Eli Tomac took the weekend off to heal his knee for Pro Motocross. We have talked about it all year how happier Eli has appeared. With the thought that his knee is recovered as best as possible for this summer, how scary is Eli’s strong supercross season paired with his good mental head space as we look ahead to Pro Motocross? Will we see this summer go better than we did the 2020 season and start of 2021 season?

Assuming his knee is not going to keep him out of the series, I think his 2022 success will continue. I believe the 2020 title was a huge emotional release and sigh of relief, he was basically on cruise control for the rest of the year. He has been in control of the SX series for so long, I don’t think he has been under as much stress. That should have him in a better position this summer both physically and mentally. I have he and Ferrandis as the two favorites and fairly close in percentage chance. I also have Ken Roczen trailing them as #3, followed by Chase Sexton and Jason Anderson as the top five threats for a title.

Hunter Lawrence has really come a long way since his brief SLC SX stint in 2020. What has taken Hunter to that next level?

He has made huge strides! I was wildly unimpressed leaving that 2020 stretch and shared the same concerns. He didn’t look like he had the same talent for it that his little brother has (and to be fair, maybe he doesn’t).

I credit a few things. First and foremost, he spent the winter training with riders like Cooper Webb, Justin Bogle, Shane McElrath, and his brother Jett. That constant competition organically raises everyone’s level, especially the lower end of the spectrum of riders. With Hunter wanting to improve, he had that carrot in front of him to chase every day. Trying to beat your brother, who would be champ, seemed to bring him up to a higher plane.

Also, it can’t be overstated how much it helps to stay healthy for a while. Momentum is a powerful thing in this sport. To be able to create a fitness base, then use that to catapult forward from instead of having to constantly rebuild from zero, is one of the most underappreciated concepts of note. Hunter went from one injury to another for several seasons before finally having some continuity as of late. That should serve him well this summer, too.

Look, two out of the three championships had already been wrapped up. But between the PulpMX LCQ Challenge, the 250SX West title, and riders battling for career-best points finishes,there was still a lot on the line! How was the vibe at the finale?

There’s no denying that a lot of the hype had been sucked out of the series. The 450 champ wasn’t even at the race and we lost the 250SX East Region champ in practice! Still, the great weather helped to make the finale a good time and there’s always just this upbeat-mood-inducing-feel for the finale wherever it may be. It’s likely the result of a long series coming to a close but the atmosphere of that is still palpable.

We know you expressed your thoughts on the Justin Barcia-Malcolm Stewart incident via the post-race review podcast, but can you regurgitate some of those thoughts here for those that might have missed it?

It’s fairly simple. Barcia has been making contact with riders his entire career and said as much on the podium. I think most riders are completely over it and him. I’m actually happier with him just owning it than trying to downplay the “Bam Bam” persona. Having said that, riders are going to start retaliating, a la Justin Bogle at San Diego. I’m not a fan of this type of racing and never have been. It’s dangerous and just creates a need for payback, causing more overly-aggressive racing. That often spirals into something way over the line.

Speaking of Mookie, he finished a career best third in the standings. How much can we credit to the Aldon Baker program,the team/bike, and Mookie pushing himself. Where do those factors fit in the breakdown pie for you?

I credit Baker’s program the most. The Monster Energy Yamaha Star Racing team (he raced for in 2021) is clearly capable in both team and machine. Look at the success on every level they have had. Mookie would have been just as good on that bike and team in my opinion. I think the dedication, discipline, and confidence gained by joining Aldon Baker is incalculable.

When everyone was least expecting it, Nate Thrasher comes out of nowhere for the win! How does this turn around his season and possible career trajectory—if at all?

I have absolutely no idea what to make of Nate Thrasher. Some weekends, he looks like he will need to send out his resume and quickly. Other weekends like Atlanta and SLC, it appears he could sign anywhere he wants and for a big raise. There seems to be no rhyme or reason for this so I will not pretend to understand it.

Who stuck out to you as the most improved rider of the season?