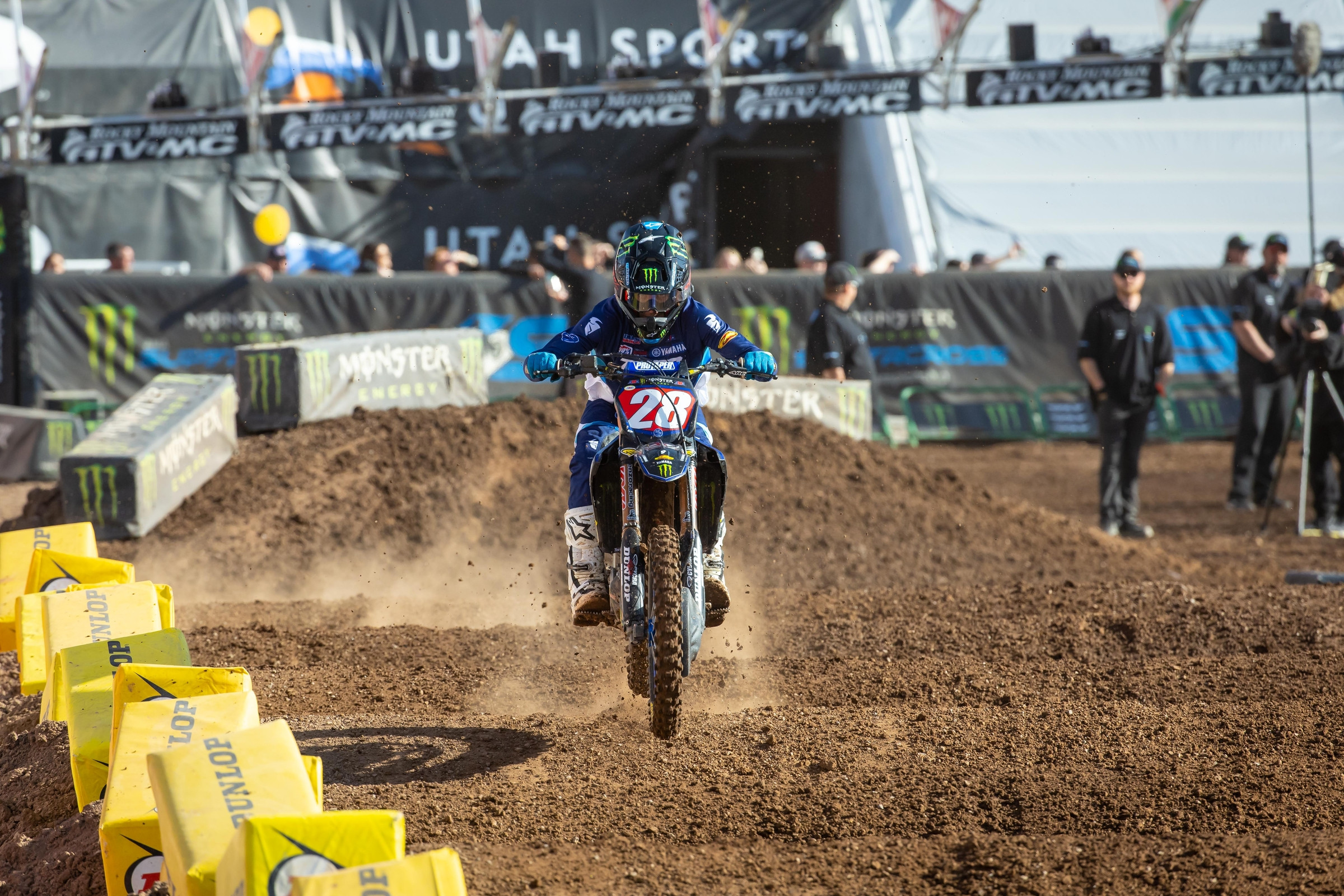 With Hunter Lawrence finishing second at the finale, it was the 16th round of the year where either Jett or Hunter Lawrence were on the 250SX main event podium. Only one race had neither brother on the podium (Anaheim 3 Supercross when Hunter crashed out in the whoops), and the Atlanta Supercross East/West Showdown saw both brothers land on the podium together for the second time in supercross.

With Hunter Lawrence finishing second tonight: the Anaheim 3 Supercross in February is the only 250SX race where a Lawrence brother did not finish on the podium in 2022. #SXHistory#Supercross#SX2022#2022SLCSX

Rookies of the Year:

Martin made his full-time 450SX debut in 2022 and made 15 main events. He recorded a season-best ninth at the Foxborough Supercross and finished 15th in the standings.

Despite his aggressive move on Malcolm Stewart, check out this wild stat from @MxReference on Twitter about Justin Barcia, who finished the race in third place:

Tomac and Barcia completed all laps in Denver

With Tomac out for the final round Salt Lake City, Barcia needs to finish the race without being lapped and he will be the only rider in 2022 to complete 100% of the laps in the 450 class https://t.co/S795VInfWt

Jason Anderson earned his fourth-consecutive win (seventh of 2022) as he sets his longest premier class win streak. Anderson came up second to Eli Tomac in the title by nine points, and he tied Tomac on main event wins this year.

Fighting back from a takeout from Barcia, Malcolm Stewart finished the race in fourth to claim third overall in the 450SX standings—a new career best for the Florida native. Stewart finished 2020 with 252 points in seventh place, then earned a career-best sixth in the standings in 2021 after earning 248 points. He blew both of his career best years out of the water in 2022 as he took third in the standings with 314 points to his name. It is incredible to see the top three in the points standings are all three on a different team from who they raced for in 2021 and all had career-best years.

5 (or more) different premier class main event winners in a single season has happened 27 of the 49 years of AMA Supercross.

Jerry Robin returned to action for the Denver Supercross and for the race at the home of the Denver Broncos, Robin and his crew had this NFL-inspired kit set up for their “sport series” gear.

“The night was great honestly, and I was riding really good all day. In the Main Event, I made a pass for third and got into it with Barcia and he shuffled me back a couple positions. I was able to make my way back up and run him down again, all the way to the last lap, but I had a lapped rider in front of me and made a little mistake. The big goal for us was to end on a high note with third in the series and we accomplished that, so I can’t thank the whole team enough for a great year! We’ve been solid and we’ve been smooth, so let’s take this thing outdoors!”

“Obviously I wanted to finish on a high note but it was a tricky track. I was able to win the heat race, which was satisfying. In the main, I just wasn’t able to get up front. Off the gate, I was pretty far back and I got myself up to fifth but I spent a lot of energy trying to pass some guys and I lost some time. Overall, I’m happy with my season even though there were a lot of ups and downs. We were able to learn a lot with the bike and we still are. We can definitely be better but it was a learning year. The highlight of the season was winning the Triple Crown in St. Louis. It’s an amazing feeling to be able to do that at 32 years old, it’s special for me. I actually made up quite a bit of points in the championship and I was getting closer to getting third but they were strong and consistent. I’m healthy at the end of the season, I always want to do better, but I have to be happy with what I’ve accomplished.”

“Today was a little bit better for me and the riding was pretty good. I was able to lead some laps in the heat and ended up second. I got a good start in the Main Event and it felt good to be up front. I made a few mistakes but I had a good fight all the way to the end. I ended the year healthy and at all 17 rounds, so we’ll re-group and get ready for next year and try to go after a championship.”

"My last race was awesome, and this was such a fun weekend. It started on Friday night at dinner with the team and our family. I ended up in seventh tonight, and as a 38-year-old with three kids, that's not too bad. I'm just so thankful for my career and what comes next."

"Round 17 was strong for me. I really jelled with the track. It was my best qualifying all year: P.7. Going into this weekend another rider and I were battling for eighth in points. He was three points back, so my goal was to secure eighth overall in the standings. It's been such a great year for me and the team. In the main event I honestly rode my best all year. The whoops were super challenging, but it was definitely one of the better Salt Lake City tracks."

“I had a good weekend in Salt Lake City. It was nice to get up front in the main event and take the last holeshot of the season. I am looking forward to the outdoors and see what we can do.”

"It was a really tough race with getting hurt the weekend before and popping my ribs out. I was dealing with that all day. Qualifying went well. I ended up 23rd overall. Unfortunately, I didn't get the starts I needed. I just didn't make it happen. It was a tough weekend for the last round, but we did the best we could with being hurt."

“We started out a little bit of a struggle but we salvaged that Main Event. We got a good start from the outside and I felt like I rode pretty solid for the second half of the race and gave ourselves a shot at the podium. I’m stoked to end the season on a good note, a healthy note, and second in the championship. I can’t be too bummed, especially with how it started, so just to be here at the end is a huge improvement for myself and the team. Another series coming up, so I’m excited to get it going again.”

“I’m happy with another top-five finish this season. I was hoping to podium or maybe win because I have experience doing well here from last year, but it wasn’t our night. Now that the supercross season is over, I’m shifting my focus to Pro Motocross and focusing on improving my results from last season.”

“I was feeling really good all day, especially after taking the win in my Heat Race. Unfortunately, we didn’t get the start we needed in the Main Event and had to battle through lots of traffic to get up to sixth. I would’ve liked to be fighting for the win and I think I had the speed today, but the start hurt us. As we head into this two-week break before we start racing Pro Motocross, I’m going to prioritize working on starts so we can have a better chance at competing for wins and podiums.”

“It was a tough night for me to cap off a season with a lot of highs and lows. I think my season just spoke a lot to what supercross is – both challenging and difficult – but also, there is glory to be fought for. There were a lot of great moments and building moments, and some of the struggles are only fuel to the fire. I can’t wait for the outdoor season!”

“It was super muddy in the heat race and I didn’t have a great start, so that was kind of a struggle and it put me on the outside in the main. I actually had a really good start and was coming into the first turn as one of the first bikes and I got hit and went all the way backwards. That pretty much ruined the night when it comes to a track that’s really tight for passing. I think the speed was a lot better these last two rounds than all year, so we’ll take that and get some more comfort in the off-season so we can come out swinging.”

"I was the fastest qualifier, something I was really surprised by, then led laps in the Heat Race. I blew the start in the Showdown, made some terrible decisions in the early laps, and went backwards. That got me caught up in Vince's incident, but I got up and charged to the checkered flag. It sucked to end it like that, but I know that I did 16 rounds of racing and had an amazing year, so I'm really happy right now."

"The last round was pretty challenging considering it was the East/West shootout. But I made it into the main through the heat." Drake said, "Unfortunately, I had a bad start in the main and could only crawl my way back up to 14th. The track was really one-lined so it was hard to make passes. But I'm very pleased to walk away with tenth in points for the season!"

"To go down while battling for a top-10 is a shame because I was going for it. It was a costly crash, especially for the points, but I have to look at the big picture of the season, which is that the split plan MCR came up with worked and that I accomplished a lot of my goals. And I can't be mad about that.”