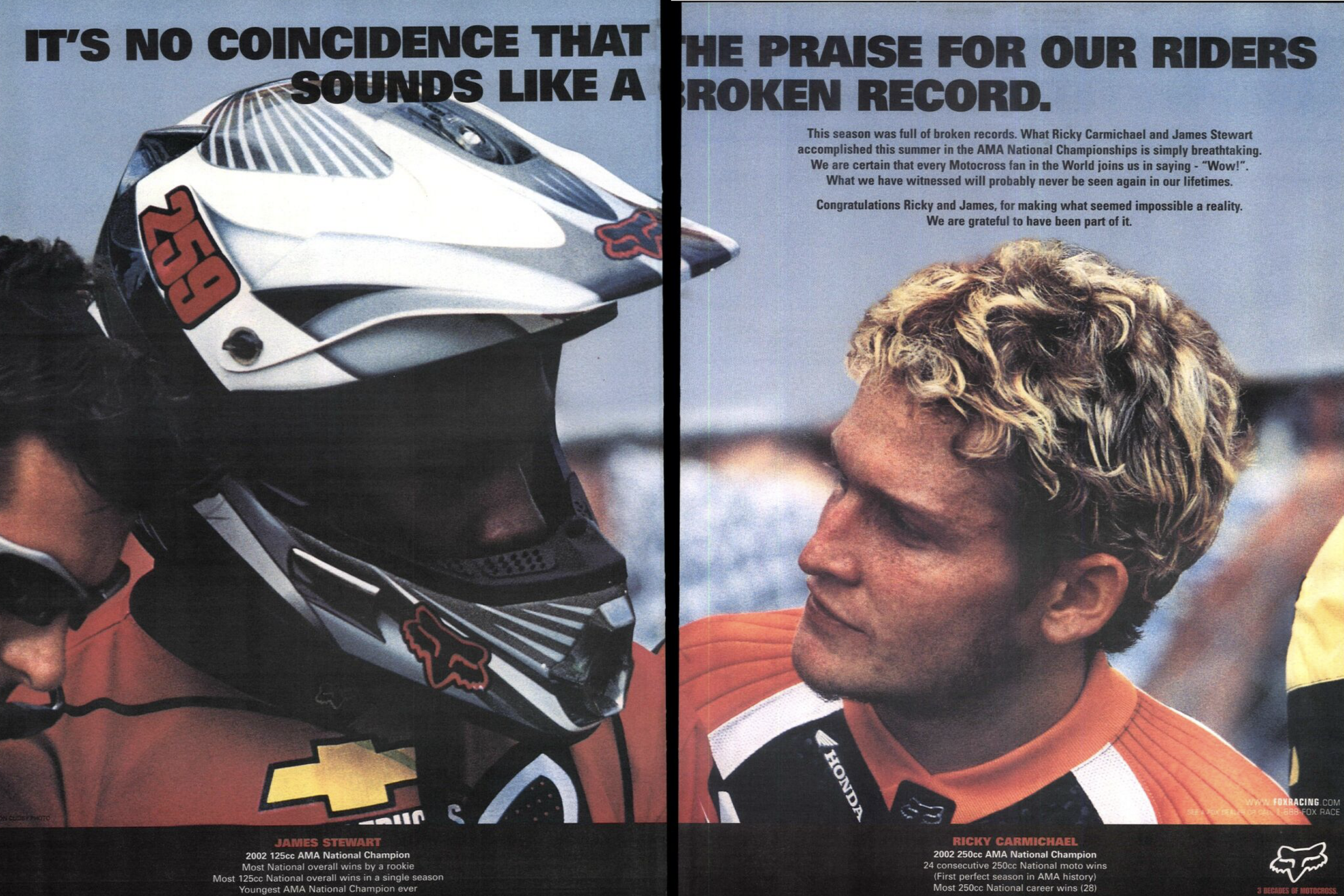 As we approach the opening round of the 2022 Lucas Oil AMA Pro Motocross Championship, we are counting down to the days by going through each of the 50 years in the history of AMA Pro Motocross. Today, the MAVTV+ Countdown arrives at 2002, a year defined by the perfect season.

There honestly wasn’t much title drama heading into the 2002 AMA Pro Motocross Nationals. Ricky Carmichael had dominated supercross and motocross in 2001, then left his familiar Kawasaki behind to make a controversial signing at Team Honda. Many were surprised to see RC leave his old brand behind, but he spoke of Honda’s technology (likely indicating a four-stroke was coming) and of trying to stay ahead of Jeremy McGrath in supercross. See, going into the 2002 supercross season, McGrath vowed to get in better shape and make a charge back toward RC. Plus, it couldn’t have made McGrath happy to see Carmichael go to Honda, the team McGrath left at the end of 1996.

The clash of these titans was much hyped going into the stadiums at the start of 2002, but it fizzled almost instantly, as Carmichael crashed out of the opening round at Anaheim with a huge endo. McGrath, meanwhile, was struggling big time with arm pump and way off the pace. The winner was David Vuillemin on a Yamaha, and the Frenchman won again at round two, where Carmichael and McGrath were still off the podium.

Vuillemin’s early competition actually came from a veteran, Mike LaRocco, and a newcomer, Travis Pastrana, in his second season in the 250 class. Pastrana looked headed to a sure win at one of the early Anaheim’s until he hit neutral on a jump, then LaRocco stole the win from Vuillemin in the late laps. Carmichael finally got healed up from the crash at the opener and started winning, though, but he was facing a huge deficit to Vuillemin in points. RC had the Honda dialed and clicked off wins, but by Daytona Vuillemin still held a solid points lead…until he crashed doing a magazine photo shoot for Transworld Motocross. Carmichael kept winning and the rest was history. He had delivered Honda’s first AMA Supercross Championship since McGrath.

No one doubted RC going into motocross. He clearly would be fast on the Honda, and he started reeling off moto wins immediately. The big attention, actually, was in the 125 class, where the most highly anticipated young star ever was making his debut.

James Stewart began building a legacy when he was on a PW50. Then a KX60. Then into the 85s and on. As an amateur no one could touch him, and because he was likely to be the first African American racer to win races at the highest level, the attention and anticipation just ratcheted up ever higher. Plus, Stewart was hilarious on a microphone and a showman on the track. He was the full package and when he turned pro, he didn’t disappoint! Within a month of his 16th birthday, he had won his first 125cc Supercross race, and while he crashed away the 125 West Championship and was edged by veteran Travis Preston, there was no doubt that Stewart’s speed was for real.

He was headed into a cauldron in his first Pro Motocross summer, though. The 2001 125 Nationals featured a knock-down, drag-out battle of drama and hurt feelings between Grant Langston and Mike Brown, so ’02 would feature a rematch, but now starring Stewart and another rugged antagonist, Australian Chad Reed, who started winning as soon as he came to America and dominated the 125 SX East Championship. Brown versus Langston versus Reed versus Stewart? Sign us up!

Well, Stewart won the overall at the very first round of the season at Glen Helen! Langston and Brown got hurt pretty quickly into the season but Reed and his Yamaha YZ250F four-stroke remained. Reed and Stewart began to build a rivalry as the summer unfolded, and while Stewart began to edge ahead in race wins and the series, Reed quipped that he just needed to get a start to run with him. This led to the first chapter in what would be a nearly 15-year drama between the duo. At Unadilla, Stewart got out front early again, but when Reed got into second Stewart started slowing and waved Reed into the lead. Then Stewart got back on the gas and blasted back into the lead! It was the highest-end of mind games, and even more impressive from a 16-year-old rookie. James went on to win the title with relative ease.

Relative because Carmichael was crushing the 250 class at an even higher level. As in, he was winning every moto. As the wins piled up the idea of a perfect season, 24 wins and zero losses, began to look realistic, but there still wasn’t even much drama or worry because with Carmichael it was coming easy. In fact, there really wasn’t even a close call or a moto where it looked in doubt. He was simply the best and crossed the finish at the Steel City finale with the first undefeated season in Pro Motocross history.

Carmichael didn’t get to show his stuff at the FIM Motocross of Nations. The race was strange from the start as it was announced it would take place in the U.S. but at a track in California that had yet to be built, the new Competition Park, on Indian Reservation land. As the event drew closer it was clear the track and the race weren’t going to happen, then the track got shutdown. Team USA withdrew, and then the race was postponed. The MXoN was then hastily re-organized to take place in Spain, but the Americans didn’t go. Team Italy scored the win.

And then came more drama, from different parts of the world. Jeremy McGrath, on the downside of his career after some epic success, announced that he was leaving his own Chaparral Yamaha squad to race a KTM. Mind you, this was not the KTM we see today, fully invested in AMA Supercross as well as AMA Pro Motocross, MXGP, etc. This was the old KTM with a record of struggling on the AMA circuit due to the production rule—especially in AMA Supercross. McGrath’s time with orange would be short though, as after a big crash at an international supercross in Italy, and then mediocre results at the new FIM World Supercross rounds that took place in Geneva, Switzerland, and Arnhem, Holland (both by-products of the AMA’s fight with the SX promoters) the King of Supercross would announce his retirement before the ’03 Anaheim opener. And the winners of those international WSX rounds? A couple of international riders based in the U.S., Frenchman David Vuillemin and Australia’s Chad Reed.