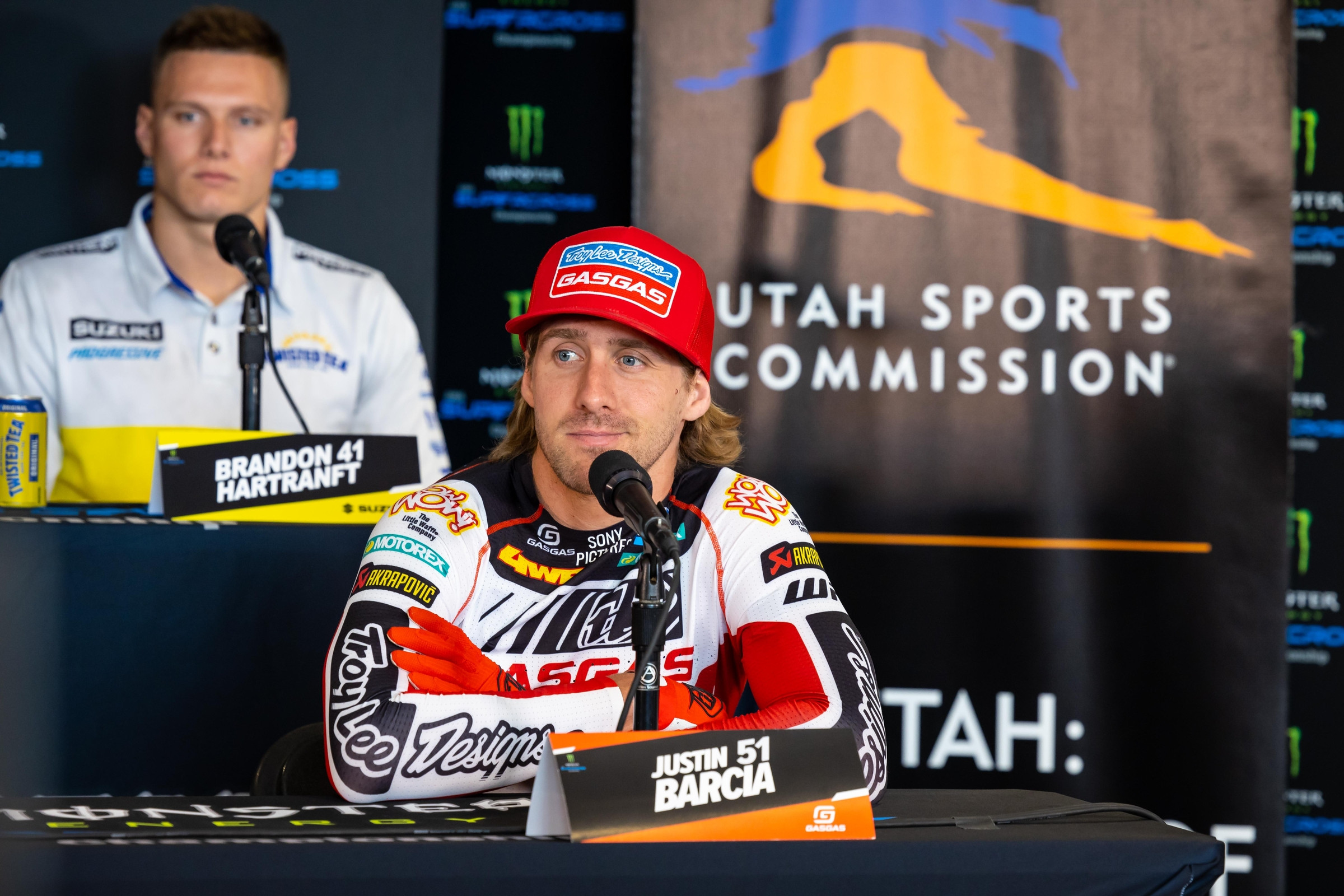 We’ve hyped up many a points position battle on this website only to find out the riders don’t care in the end. It’s easy fodder for 10 Things to Watch on a Saturday, but one time we were down in the staging area at a Lucas Oil AMA Pro Motocross Championship round asking Andrew Short and Jake Weimer if they cared about beating each other for third in 450MX points. They did not.

Before the Salt Lake City finale of Monster Energy Supercross, our Aaron Hansel wrote “Right now, he [Stewart] has four points on Barcia, which is far from comfortable.”

Indeed. Sometimes riders think title or bust, and while factory deals always offer big bonuses for titles, a third-place bonus isn’t always a guarantee. Sometimes third matters, and clearly it did this year, because Justin Barcia and Malcolm Stewart wanted it badly, and we don’t think it’s so the AMA sheets at the end of the season would list them in P3. This was for straight cash, homie.

By now you have heard what happened, either by watching the race, or perhaps the massive cheers and boos emanating from Rice-Eccles Stadium could actually be heard at your house. Stewart passed Barcia with a master class on railing a rut through the inside of a turn. Barcia knew his chance at third in the series was slipping away, so he just drove straight into Malcolm when he had a shot. Malcolm got launched from his bike, and Barcia got the position back.

Here’s what Stewart said about the move:

“I was just putting a charge in, and Justin straight T-boned me man,” said Stewart in his television interview. “We’ve been racing clean all year long and that was dirty, I’ll be straight up with him. We’re definitely going to have a talk after this race. I’m so thankful to get third overall, that’s where the money’s at.”

“I’ll be honest, I heard you guys screaming with me the whole time and that’s the love that I want to hear,” said Stewart. “That’s what kept me motivated and I could hear it. Thank you guys again and I’ll see you next year.”

Yes, the fans were going nuts for Malcolm once he got up, hoping he could catch Barcia and extract some revenge. With the fans urging, he almost got there, but Barcia hung tough for the podium. As soon as he crossed the line, the cheers for Stewart were replaced by boos for Barcia, and once Barcia headed to the stage, the noise continued.

“Yeah, obviously the fans aren’t happy, we’re racing for a championship, third in points, it was an aggressive pass and I’m going to own that. What else can I say?” said Barcia. “I’m out here racing for this championship, I wanted third, I was going for it. I would like to think he would have done the same thing but maybe not. I’m sorry guys I’m racing for a living. You can bring the boos but love it or hate it this is me. Since Day 1!”

The third-place finish for Barcia wasn’t enough to steal third in points, and it wouldn’t have mattered anyway because the AMA docked him 10 points for aggressive riding. But he holds onto his third-place finish, and with that he was headed to the post-race press conference. You know what question was coming first, courtesy of our own Kellen Brauer. We’ll give you Barcia’s press conference thoughts here.

Racer X: Justin, obviously the contact with Malcolm Stewart there. Just kind of talk us through the battle beforehand, going back and forth a little bit with him, and then your thought process on how you were trying to make that pass attempt.
Justin Barcia: Yeah. It was definitely a good battle. I was riding pretty tight. Malcolm was obviously riding a little better than me, because he was all over me. He went inside, rolled double. I went double, single and charged at it hard and that was that. Not much to really say about it. We were racing for third in the points, and I wanted it bad. Maybe it was too much, but that’s how I race, I guess. It is what it is.

Malcolm was using the crowd as motivation to get back up to you. You as a dude who knows that Malcolm is right there, you can see his fender through certain turns, how do you use, or do you use the crowd as a positive or negative motivator to keep your butt on the bike in front of Malcolm?
Absolutely. Yeah, I knew someone was coming and I knew who it was. Like I said, I was riding pretty tight and doing the best I could to hold him behind me, but I picked it up those last few laps and made it happen. It was definitely intense, to say the least.

Like you alluded to, getting third place overall in this championship was very important for you this year. You could even tell all day that you were fighting to get better. In timed qualifying, you found a second a lap late in that last session and were trying to race forward. So, going from Denver last week where it was a so-so result and you knew the points spread that you had, how big is that motivation through this weekend knowing when you get a pass opportunity like that, which you’ve owned up to, you have to make that happen?
Yeah. When there’s an inch, I take it. That’s just my style. I’ve always raced like that. There was money on the line, and I wanted that position. I wanted to be third in the points, and unfortunately, I didn’t make that happen which is kind of a bummer. But all in all, this was my most consistent season. Done a lot of good stuff this year, but it’s a little bit of a bummer that this situation happened. Like I said, it is what it is at this point. Just got to move past it and keep focused on myself and working towards the outdoor series because that’s coming up quite soon.

I think this statistically is one of your best seasons ever, even though you didn’t get a win. We hear so much of the ups and downs of other riders. They want to retire, then they come back and they’re happier than ever. It seems like you’re just at a hundred percent all the time. Does motivation ever wane for you? Honestly, it looks like you’re improving still in your career, even though you’re one of the veteran guys.
Yeah, absolutely. I feel like being 30 years old and being the best I’ve been in my career. It’s never easy, this sport. We’re always working hard trying to be better than the next guy. This season for me was definitely a positive season. Middle of the season we definitely struggled with setup a little bit. I think I wanted more and went in the wrong direction a little, and then the last three weeks we’ve found that direction again where I needed to be. We just went a little bit too far away. We’ve been on the same bike for a couple years now, and I should have just stayed where it’s good. For me and the team, we got back on track. It was definitely a positive season. I feel like getting older and feeling better than ever, so that’s not a bad thing. That’s for sure.