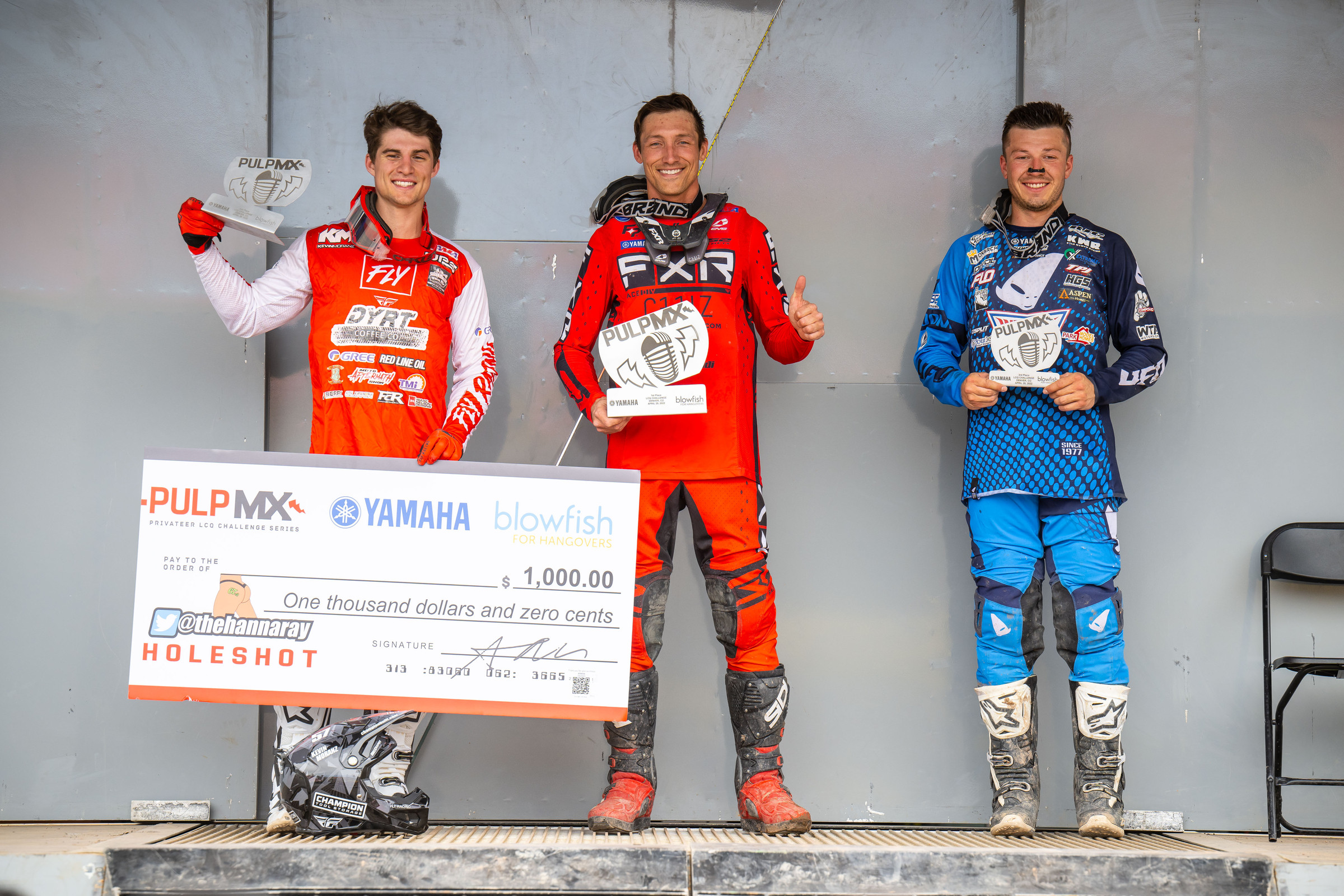 The final round of the Monster Energy AMA Supercross series took place in Salt Lake City this past weekend and although we got the one final title decided, there wasn’t much else going on. I have some thoughts on the race but most of this column will be dedicated to the inaugural Yamaha LCQ Challenge race that somehow the folks at Feld decided to let me have.

First though, the race…

Jason Anderson won again, his fourth in a row, and that makes it seven wins in a remarkable comeback season. He wasn’t really challenged in this race. Chase Sexton caught him a little but couldn’t really challenge Jason at all. And those two guys were well clear of third place. Ironic that the in last race of the series, the two guys who had everyone covered in terms of raw speed this year were 1-2.

In short, these two showed a ton of speed all year long and they showed us exactly why at the finale.

Now we get to third and that was Justin Barcia, who was roundly booed on the podium after his knockdown pass on Malcolm Stewart. It was quite something to see the crowd unleash their fury like that. Who knew Utahans (is that the word?) were capable of so much fury? Barcia’s move on Malcolm Stewart was over the line and I thought his comments afterward were strange also. Generally, Bam talks about good hard racing and he’s not sure what the fuss is and we’re all making this out to be a bigger deal than it is. In Utah though he spoke about racing for money and third in the points and so on. But passing Malcolm dirty or clean wasn’t going to get him third in points (and the bonus that comes with it) so then I was thinking was he trying to, like, hurt Mookie or break his bike? Which makes his pass even worse. I don’t think he was, but his comments afterward puzzled me.

Count me in the tens of thousands of people who wanted to see what Malcolm was going to do when he caught Barcia, by the way. I’ve defended a lot of Justin’s moves over the years because I do believe supercross is a contact sport and sometimes, you gotta pass guys. But this one was greasy and in the amateur Futures class about 30 minutes before Barcia’s race we saw Ryder DiFrancesco pull the same move on Chance Hymas, only Ryder D (we’ll get there when it’s time) grabbed his brakes before he T-boned Hymas.

But still, the AMA did something right? They had Barcia on probation from earlier this year and actually had some teeth in this penalty. Maybe not enough, but for years and years the AMA did nothing to guys on probation, so I suppose this is a start.

Christian Craig didn’t make it as easy as he probably wanted but even with a fall, he brought home the 250SX West title with a safe ride. Congrats to CC for the title, it’s been a long time coming. Many people in the industry, and maybe at times me, thought Craig might not have been strong enough mentally to get a championship. We’ve all been living this, “Holy smokes is Craig fast and look at that speed and if he could only figure things out, he could win a title,” world for a long time now. Well, he did it. And in dominating fashion at that.

When Nate Thrasher zipped by Craig early in the main event, I was like 'Huh?' because it looked like he would just be points stealing from his teammate as Hunter Lawerence was, of course, going to win the race. Hunter had been on a roll, right?

Nope, Thrasher went by Lawrence and although there were some close calls in the whoops later in the race, Thrasher did a great job by winning the race, helping his teammate and yet again, we’re mystified at Thrasher’s rides. He’s got just enough there to make one wonder if he can nail down more consistency and be a title threat next year. His Racer X Vault results are pretty bizarre so far.

So, for some reason the folks at Feld were gracious enough to let me have my own race to give away our raffle money for the Yamaha LCQ Challenge this year. Yeah, I couldn’t believe it either. We’ve given over $130K in three years with this thing to the riders who accumulate the most points in the 450SX LCQ. The idea is to award the guys who race all year long and don’t make mains. Because in the end, we need more than just the 22 riders in the main to make a show, right?

So, I qualified the top 17 through the season's LCQ’s and then I picked five wild card riders of my choosing. I did clothespins for gate picks, and Feld and the AMA gave me a six-minute-plus-one-lap race on Friday after press day.

And then the fun began.

My wild cards were Marshall Weltin on a 250F (buddy of mine who was just trying to get a deal on an exhaust at the start of the year- that’s a privateer!), Robbie Wageman on a 250F (Russ is cool as is his team), John Short ( good dude), Alex Ray (terrible year and he’s broke), Logan Karnow (I picked him before 2022 became “year of the Karnow”), Ryan Breece, and Kyle Chisholm. Breece and Chiz are total privateers and because they’ve been so good, I asked the AMA if they could start backwards. They said no but I was able to put them in the second row.

Some of the other riders were upset with Breece and Chiz being in, but I assured them that the race was six minutes, and they were in the back row, how high could they possibly get?

Things started to go sideways with the clothespins. Immediately after the drawing, the “better” riders were purchasing the lower clothespins from the “other” riders. This made people upset, and I don’t want to shock you here, but I didn’t really have a rulebook (or rules). So, I just sort of shrugged and was wishing I had nothing to do with this race.

Two riders came down to staging for a race without transponders on. Again, this was a race and I’m not sure how they thought they were going to get scored. I didn’t put “have your transponders on for the race” in the email to all the guys but I also didn’t note that they should also have pants on when they leave the hotel.

Then I had a rider ask me if they could cut the track. I knew at that point things were getting out of hand.

The gate dropped and even though Chiz and Breece were second row, they came around after lap one in sixth and eighth respectively and I figured I was screwed. These guys were pretty good it seemed.

Then Robbie Wageman about died when his bike blew up in the air off a triple and he went on a trip to Endonesia. This brought out the lights and the flags, so the riders had to roll the triple like a regular SX race.

The riders behind Moranz all singled the triple and I was really hoping no one saw Moranz do that.

Except he was leading the race.

Spoiler alert: everyone saw it.

Meanwhile Chiz and Breece were ripping through the pack (A Ray crashed. Shocking, I know) and crushing dudes in the whoops. It was just a matter of time and soon enough, in about five minutes the guys who started in the back row were one and two.

Daniel Blair was loving this standing next to me on the podium. I was trying to figure out how to duck out of the stadium before the other 20 privateers lit me on fire.

So Chiz won the whole thing and Breece was second until the last turn when he blew the whoops and Moranz got back by him. I asked the AMA guy if he saw Moranz jump the triple on the red cross and he said he did. He said it should be a two-position penalty, but it was my race, and he had no opinion.

Moranz was pleading his case saying the lights weren’t on and if they were, the safety guy was blocking them and this might come as news to you people, I didn’t have any other “officials” around (unless you count Blair?) and had no video to review. The only rider who would’ve been affected was Breece and after I talked to him, he was cool with nothing being done. Then a day or two after he wasn’t as cool, but thankfully Moranz did break off some of his cash to give to Breece for his infraction.

In the end I, like every other privateer this year, got Chizzed on badly. Kyle made a ton of money, his dad Gar-Bear was chuckling away afterward knowing that he and his son just played me. Chisholm and Breece were really pretty impressive which yeah, watching them all year this season wasn’t a surprise.

All in all, we had a record turnout in terms of revenue brought in, with over $125,000 brought in for the 22 guys, and with all the prop bets, we got over 135K for privateer guys. How awesome is that?

Thanks for reading OBS! Appreciate it and email me at matthes@racerxonline.com if you want to chat about this race, how I’m out of the promoting business, or anything else.