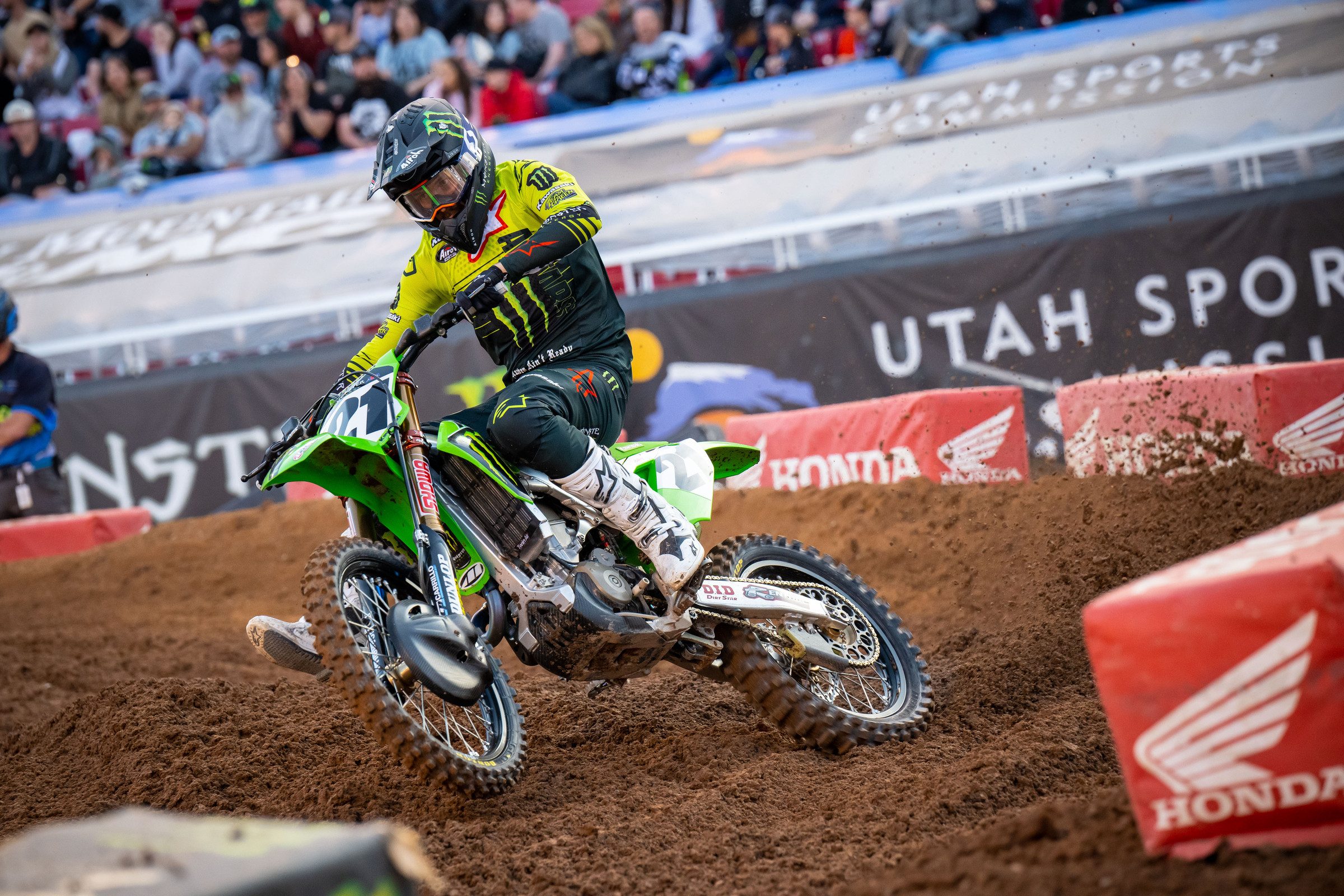 At the final round of Monster Energy AMA Supercross in Salt Lake City Jason Anderson was able to secure his seventh win of the season. That ties him for most wins in 2022 with the series Champion Eli Tomac, as well as bests his personal record for most wins in a season. It would be easy to look back at instances like the takeout move Justin Barcia put on him at Anaheim 1, or the DNF he suffered after a crash in Detroit and wonder "what if?" But Jason is not looking backwards, only to the future, where he hopes to make more runs for the title. Here is what he had to say after his win in Salt Lake City.

Jason, incredible finish to this championship. There’s a lot to race for. We talk about pride, ego, money, all those things, but how about messaging? Is this a good way for you to send a message going into outdoors and into 2023 that you are back, all the way back and maybe even better than ever?
Jason Anderson: Yeah. Personally, it’s huge for me just to be in the position I’m in, to have the momentum I have. To be honest, over the past few years, you get insecure. You don’t really know if you’ve got it. It’s tough whenever you struggle. Being right here, I’m thankful but at the same time, I just want to keep progressing and be able to come back next year. I really want to make some more runs at a championship. I think I’ve got it in me. I guess if you look at statistics, I guess the clock is ticking with age, but anything is possible. Let’s go for it.

Based on the way you’ve carried yourself the last couple weeks, if somebody was to basically look at the statistics, like you have the most wins you’ve ever had in the season, but you lost the title. I would never guess it by even looking before you went up and sat there. I don't know if I’ve ever seen you this happy, this much enjoying what you’re doing. We’ve talked about it in a lot of press conferences, but what has gotten you to this point? What has basically put a smile on your face where maybe some guys would be disappointed that they didn’t pull it off this year?
For me, it’s nice to be in this position. I want to prolong my career. Even when I was struggling, I didn’t want to stop racing. Results like this help you keep a job. It’s enjoyable to ride up front, but at the same time I’ve got to stay on my toes. My personal life is amazing right now, just between everything I’ve got going on there. I switched up my program. I’m back home in New Mexico where I grew up. I think that’s a breath of fresh air for me. Obviously, you’ve heard it a million times but new team, I’m in a good spot. I’m enjoying it. That’s key. I think that’s underrated in our sport. I think a lot of people feel like you have to go to Florida or whatever, and Florida is not bad. It’s not a bad thing, but I just wasn’t very happy there. I just had to switch a couple things up and luckily it worked out, but you’re never that sure until it happens.

You’ve tied Eli for the number of season wins now, correct? With the title decided already, was there any greater or lesser motivation to win tonight? What helped you catch fire so badly late in the season?
Obviously, I’m motivated and after winning a few in a row I really wanted to make it four in a row. It’s really cool. Before this, I’ve only won two in a row, so being able to have those streaks, they’re some cool things, cool achievements to have for your career. It’s obviously good momentum going into next year. As for what has changed, I don't think much has changed. At St. Louis, I was kind of under the weather with being sick. I felt like I was kind of decent there, but then at Atlanta I started getting some momentum. I made some bike changes, but nothing crazy. I think it’s just sometimes things start clicking. I had been doing the work and honestly just trying to progress every day, whatever it is. Even when I’m on the track, whatever the number is I’m out there. I just want to keep progressing and keep learning and keep that goal inside, more so than the number. It’s nice to be able to get some wins and get those streaks. It’s pretty incredible.