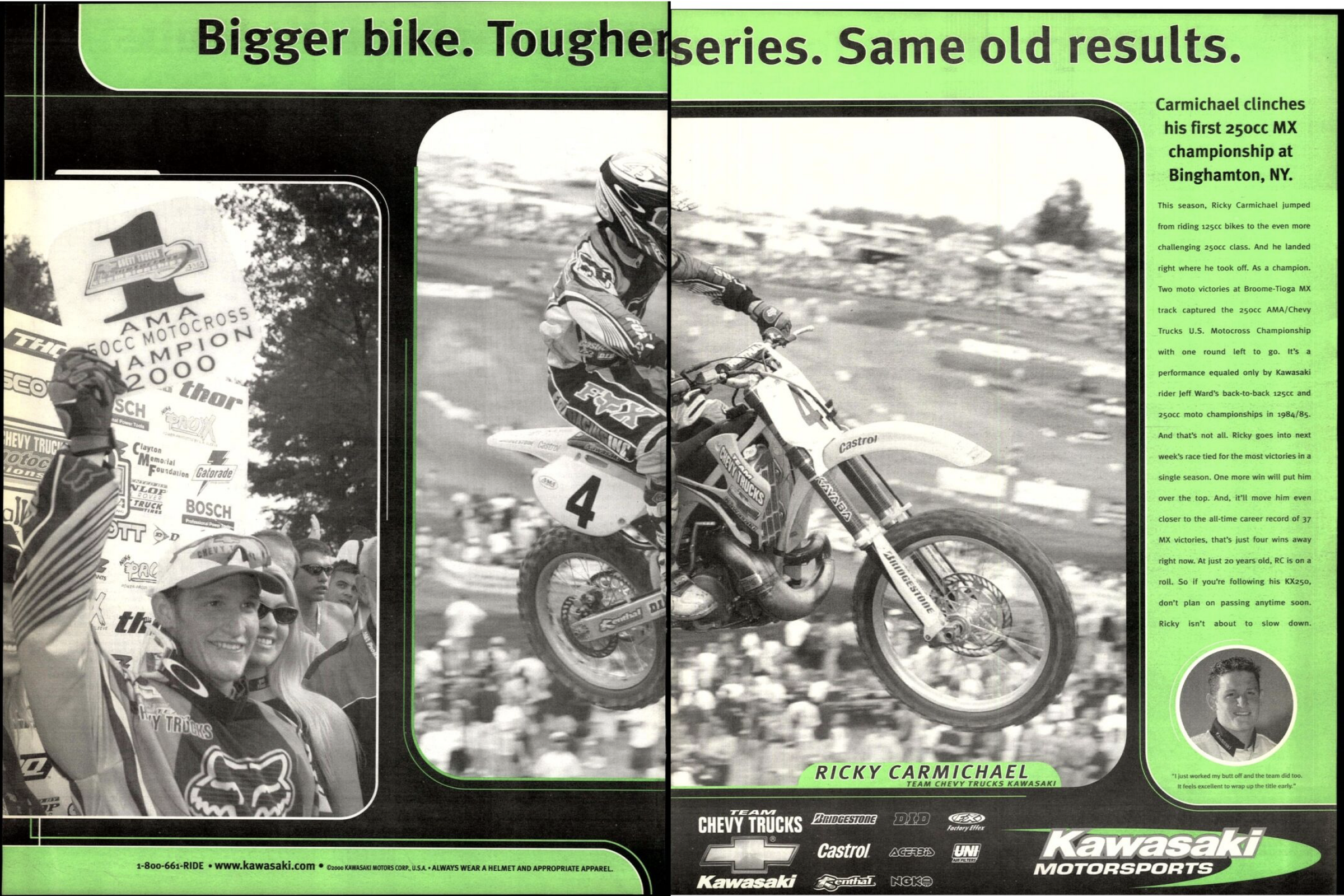 Lots of seasons start with talk of “how will the rookie do on the bigger bike?” but the results are always mixed. Some jump to the big class and win soon, some crash, some take years to figure it out and some never break through at all. Ricky Carmichael won three straight 125 AMA National Motocross Championships as soon as he turned pro, and also tied the all-time mark of 125 National Motocross wins with early-1980s dominator Mark Barnett. RC was as good as good gets on a 125. Could he do it on a 250?

While Carmichael was vacating his 125 throne, a new name was entering the fray with much fanfare. In fact, it’s more accurate to say that Travis Pastrana exploded onto the scene, because he had already become a star of ESPN’s X Games before he was old enough to turn pro in AMA racing. Young Travis was already the world’s best in the rapidly-expanding world of freestyle motocross but also the top prospect in amateur motocross. Anticipation was at fever pitch once he hit the supercross scene. In typical Travis fashion, he decided to pull a freestyle trick on the site lap for his first supercross main event ever and crashed. Welcome to the show! By the end of the year, though, he was winning 125SX races, although Yamaha of Troy’s Stephane Roncada won the title over FMF Honda’s Brock Sellards, with the up-and-down Pastrana third.

Carmichael had tried 250 supercross in 1999 and crashed a ton. He was more consistent in 2000 but still no threat to incumbent champion Jeremy McGrath, who, even at age 28, was just as dominant in the stadiums as usual. Jeremy cleaned up again, topping Frenchman David Vuillemin, with Honda’s Ezra Lusk, usually MC’s biggest competitor, knocked out of the series in practice at round one with a shoulder injury. Carmichael was a quiet fifth in the standings, but he did win his first 250SX ever at Daytona, showing he could handle the 250 in rough, outdoor conditions.

So then the AMA Motocross Championship began at Glen Helen Raceway, and Carmichael instantly went 1-1 to show what he could do on a KX250 outdoors. It was impressive, but a hungry, experienced group of veterans were ready to fight him. First, the defending champion, Suzuki’s Greg Albertyn, had broken his femur in supercross but returned for Glen Helen and went a solid 3-5. Also a man to watch was Honda’s Sebastain Tortelli, who was super, super fast in his move to AMA Motocross the previous season, but suffered a wrist injury that hampered his season. Seb was determined to get the 2000 title, and he was Carmichael would get into some incredible duels, pushing the pace of the series to new levels.

By the halfway mark of the season, it was still anyone’s title, Carmichael and Tortelli trading wins and often the points lead. Carmichael, for example, got the better of Tortelli in a classic at Budds Creek, Tortelli got him back at RedBud. The RedBud weekend was significant, as Roncada won the 125 class, making for a French sweep on America’s birthday weekend.

Carmichael and Tortelli split motos 1-2 and 2-1 at Unadilla. It was on. Then Carmichael edged ahead by winning at Troy, Ohio, and Tortelli tweaked an ankle. Carmichael kept building and building and in quick succession his win streak and points lead grew. Carmichael won the entire back half of the season, six in a row, to win the title in his rookie year. Tortelli was second. Albertyn, meanwhile, suffered a torn ACL but gritted it out to the end of the year, then called it a career. The champion the previous year to Albertyn, Doug Henry, had retired a year earlier. With Carmichael in the class, the paradigm was changing in a hurry.

One other thing to note during RC’s run in 2000: during the summer he started mentioning his new trainer, Aldon Baker. As we mentioned yesterday in our review of 1999, Carmichael’s mentor Johnny O’Mara brought Baker aboard to step up Carmichael’s diet and training for the 250, and RC was clearly getting leaner and meaner. After conquering 250MX, the credo was that they were going to go after McGrath in supercross for 2001. Could that really be done?

In the 125 Nationals, Stephane Roncada was looking good early, aiming to add the motocross crown to his new 125SX East title. By midseason Pastrana had settled into second in points but couldn’t catch the fast and friendly Frenchman. Ah, but there was a magic to Pastrana’s brief years as a racer. In later summer he was off to the X Games again to grab more gold medals, and at about that same time, he started to get even faster outdoors, and started winning races. Travis won five-straight motos just as Roncada slowed a bit after tweaking his knee. Improbably, Pastrana had made up enough points to turn the 2000 season finale at Steel City into a winner-take-all title race. Pastrana, 16-years-old but wise beyond his years in pressure situations, simply rolled away, going 1-1 again to wrestle the title away from Roncada by two points.

Along the way that summer there were two other significant developments from other motorcycle manufacturers—though only one would have a lasting legacy. They both happened at the High Point National on Memorial Day weekend. First, Cannondale made the racing debut of their new MX400 model, which was built right up the road in Bedford, Pennsylvania. It did not go well. The second development was the fact that Michigan’s Kelly Smith would win the 125 National that day, marking the first-ever win in AMA Pro Motocross for the Austria-made KTM brand. It was the first of many, many wins to come for them.

With Carmichael and Pastrana as the new champions of AMA Motocross, the stories were well set heading into the new millennium. They also had to be teammates for Team USA at the FIM Motocross of Nations, along with Ryan Hughes, now an American ex-pat racing the GP circuit. The race was held in France, where they would meet their familiar rivals in Tortelli and Roncada. Unfortunately for the French fans, hopes of victory were dashed immediately when the nation’s new 250cc World Champion, Fred Bolley, got hit in the face with a rock in practice, breaking his nose and ending any chance for French victory on home soil. Pastrana, Carmichael, Roncada, and Tortelli put on some great battles, though, but Team USA pulled out its first victory since 1996. American fans also got an introduction to new 125 World Champion Grant Langston, of South Africa, who banged bars with Pastrana all weekend. Langston was heading to the U.S. full time in 2001, aiming for Pastrana’s AMA 125 Pro Motocross championship. It was going to get good between those two.

As for Carmichael, the work wasn’t finished. He was soon back to his Florida compound with Baker to work on supercross and the heaviest of heavy lifting: trying to dethrone the king.