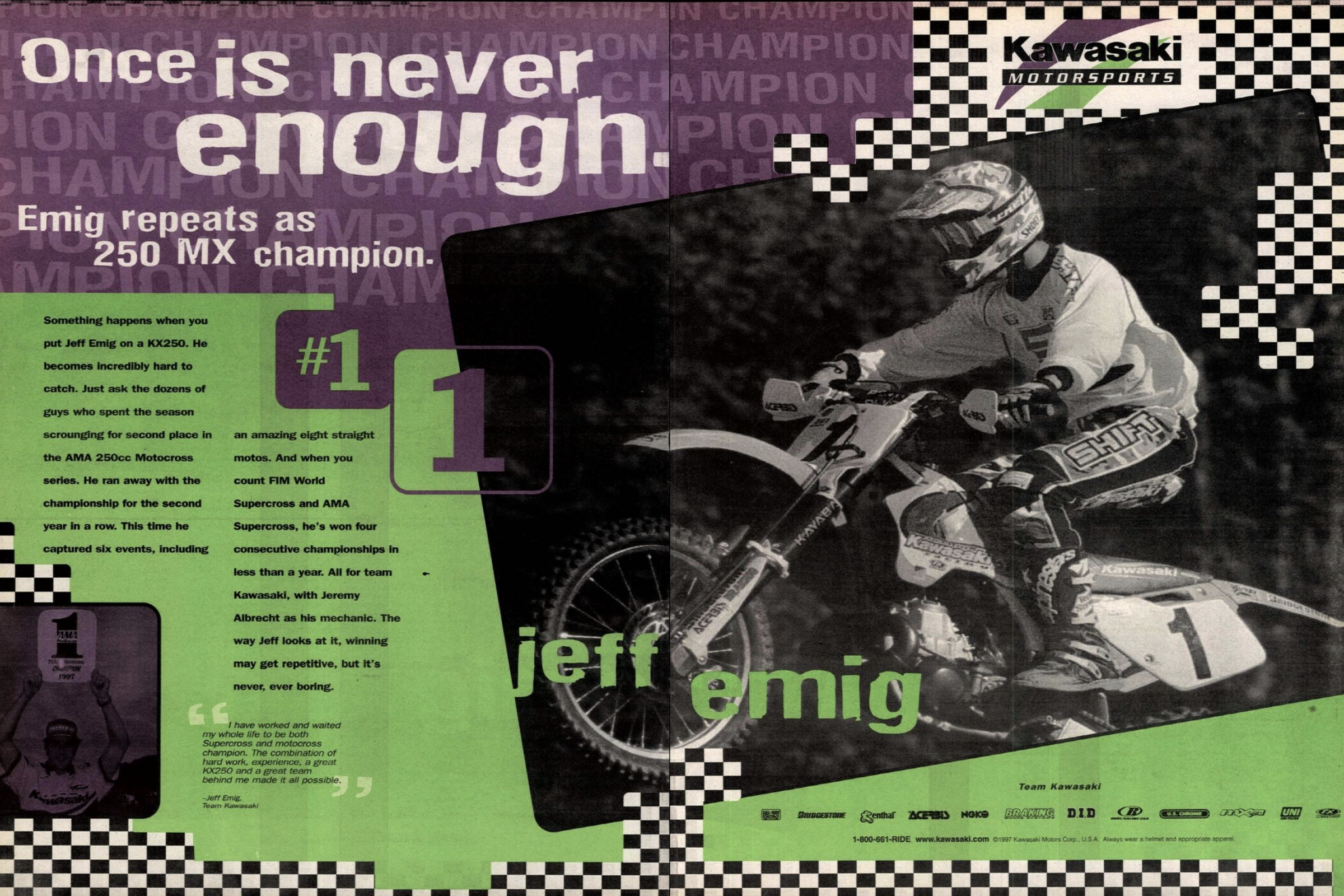 The MAVTV+ 50-Day Countdown to the start of the 2022 Lucas Oil AMA Pro Motocross Championships, which is celebrating its five decades in existence this season. So we are going over each year of the series since its inception in 1972. Today we reach a very pivotal year, 1997, the halfway mark in our 50 years of AMA Pro Motocross.

For the four years that led up to the ’97 season, Jeremy McGrath was the absolute ruler of AMA Supercross. The factory Honda rider shattered every record there was in just four years, including most main event wins, most championships, most consecutive wins in a season, most consecutive titles, most wins in a season, most laps led—it was total and utter domination. But all was not perfect between McGrath and Honda. He just wasn’t that fond of the new aluminum-framed CR250 he was to ride in 1997, and that caused a serious rub between the rider and the brand that had just won the last nine AMA Supercross titles in a row, thanks to Rick Johnson, Jeff Stanton, Jean-Michel Bayle and of course Jeremy.

In the waning hours of December of 1996, Cycle News blasted the breaking news across the cover of their last newspaper of the year: “Shocker: McGrath to Suzuki!” So began a mostly strange and unfortunate chapter in the career of the King of Supercross, as he stopped himself in his own tracks to make a massive career move on the eve of what was supposed to be yet another title defense aboard his #1 Honda. Instead, he had to cobble together a Suzuki deal with help from his own Showtime Racing/Nac Nac Enterprises company, Phil Alderton of Honda/Yamaha of Troy fame, and personal sponsors like 1-800-COLLECT and Fox Racing. What he didn’t have was the luxury of time, and Jeremy McGrath on a Suzuki RM250 was nothing like Jeremy McGrath on a Honda CR250 (definitely not the pre-’97 versions). With very little time for any real testing or bike setup, McGrath started out behind the 8-ball when the ’97 season kicked off at the Los Angeles Coliseum, and he promptly collided with his old Honda teammate Steve Lamson and ended up with a lousy 15th place finish. (Ironically, another Suzuki rider, Greg Albertyn, won the opener.)

McGrath tried to sort himself out quickly and was on the podium for each of the next few rounds, but he never quite got himself completely out of the hole he’d found himself in at the start of the season. He didn’t win a race until the series was halfway over, and he did get to within striking distance of the points leader in the waning stages, but in the end, he came up short of the title for the first time in his 250cc Supercross career.

The main beneficiary of McGrath’s mostly lost season was Kawasaki’s Jeff Emig, his longtime rival. Emig emerged from a scrum of title contenders and race winners; besides Emig, McGrath and Albertyn, other ’97 race winners were Yamaha’s Doug Henry, Ezra Lusk and Kevin Windham, plus Kawasaki’s Damon Huffman—quite a change from the previous year, where McGrath won 14 of the 15 rounds himself! And maybe the most pivotal win of them all came at the last round, when Doug Henry, who was leading the standings until he broke his hand, parked his YZ250 and went out and won on the Yamaha YZM400 prototype four-stroke, a big sign of things to come.

When outdoors started, Emig had all of the confidence he needed to defend the #1 plate which he took from McGrath the previous summer while Jeremy was still on his Honda. He won seven of the 13 rounds, including the scorching hot Kenworthy’s round in Troy, Ohio. Emig’s Kawasaki teammate Damon Huffman also won that day in the 125 class. Steve Matthes and Jason Weigandt did one of their PulpMX Re-Raceables podcasts on that notoriously hot race which you can listen to right here:

Behind him there was plenty of good racing as Greg Albertyn added a first national win (Hangtown) to the first SX he won earlier in the year. Manchester Honda’s Damon Bradshaw shocked everyone with a very popular win in the mud at High Point, his first success since 1993. Yamaha’s Lusk won at Budds Creek, and home favorite John Dowd raced his Yamaha to the win at Southwick, as well as Broome-Tioga in New York. But in the end it was Emig’s mid-season sweep of Unadilla, Kenworthy’s, Spring Creek and Washougal that put the title out of reach for the others.

As for the 125 Nationals, they were mostly being dominated by the sensational rookie Ricky Carmichael of the Split-Fire/Pro Circuit Kawasaki team. The future GOAT came into the season with exactly one 125 National under his belt, the ’96 Steel City final, where he finished a modest eighth overall. He then raced the 125 East Region in the ’97 AMA Supercross Series where he was more wild than he was consistent. A few big crashes cost him the title, which went to Suzuki’s Timmy Ferry. But one week after RC won his first 125 SX at Atlanta, he got his first outdoor national win. As a matter of fact, Carmichael swept the first three rounds at Gatorback, Hangtown and Glen Helen. He had some trouble at the muddy fourth round at High Point, which was won by Team Honda’s Scott Sheak. He also got into the occasional duel with Yamaha’s Kevin Windham, who won at Unadilla and Steel City. Winhdam had also won the 125 SX West Region for the second year in a row (with cameo wins by French visitor David Vuillemin and the “Ghost Ride” LA SX2 winner Brian Deegan) and then Windham beat Carmichael straight-up in the 125 East-West Shootout at the end of the supercross season in Las Vegas. But outdoors was a different matter.  Before all was said and done #70 Ricky Carmichael clinched the title early—something he would continue to do outdoors for the next nine years in a row. Just like we glimpsed with Doug Henry’s four-stroke that same season, Ricky Carmichael’s summer of 1997 was a big sign of things to come.

During the off-season Team USA lost another Motocross of Nations, this time in Nismes, Belgium, as the trio of Jeff Emig, John Dowd and Steve Lamson struggled on an overly watered track. But that wasn’t the biggest news of the off-season. Instead, it was the fact that Jeremy McGrath was leaving his mash-up Suzuki program for the new Chapparal Yamaha factory squad. The King was coming back for his crown.