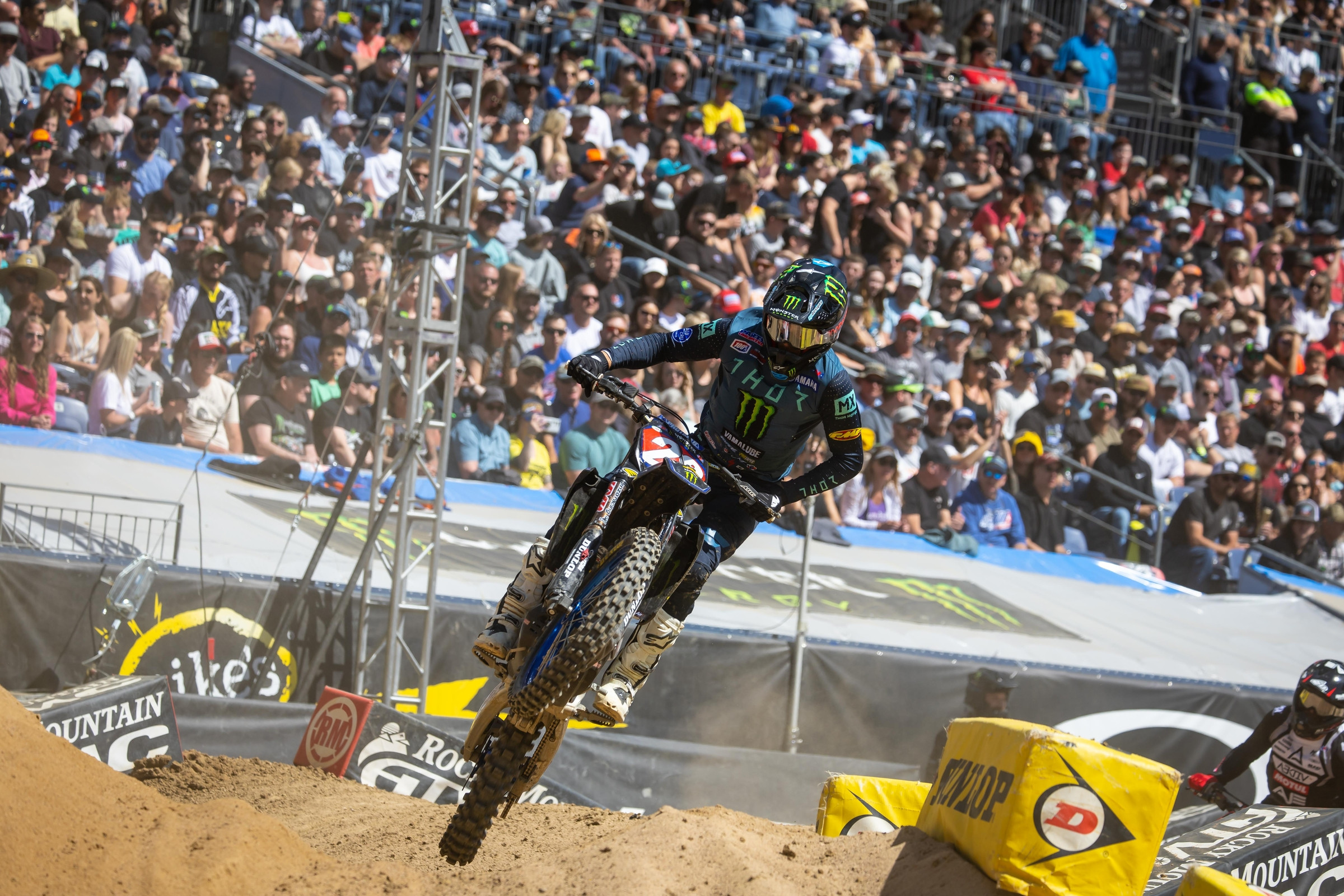 The Moment Caught Out

The ebbs and flows of a Monster Energy AMA Supercross season are such that nothing is guaranteed. When the 250SX West Championship took their nearly two-month break starting way back in February, Christian Craig held a 28-point lead in the championship and had just won four of the first six rounds. With Hunter Lawrence crashing out of the Anaheim 3 round and slipping to third in the championship, Craig looked destined to take the title. But here we are coming into the finale this weekend and the 250SX West Championship is the only title fight still alive.

Since returning from the break, Lawrence has gone on a tear winning all three races which also included the East/West Showdown in Atlanta. Craig finished second to Lawrence at Seattle and Atlanta to watch his points lead slip just below a full race distance at 23 points. At the penultimate round last weekend in Denver, Craig controlled his destiny, as he could wrapping the title early if he could win the race. The win would at least give him a 26-point advantage in the championship and also guarantee him the tiebreaker as his five wins would be unreachable at that point for Lawrence.

It was all set to play out as Lawrence holeshot the main event in Denver with Craig right on his tail. For the first five laps of the race, Craig followed closely behind looking for a passing opportunity that just wasn’t coming. The slick conditions of the Denver racetrack meant Craig would have to force the issue, because the track didn’t leave a lot of options for passing, and Craig also knew if he drove it in too hard he could easy crash on the slick stuff. Then, even if he did make the pass, he had to hope that Lawrence’s fight back wouldn’t put him on the ground.

Unfortunately for Craig, he never got the chance to see what would happen as he crashed jumping into the sand on the sixth lap of the race and went down. Craig explained afterwards that he happened to catch a rock on the face of the single jump into the sand and that is ultimately what put him on the ground.

“A lot going through my mind when I have him right in front of me,” said Craig. “I could have played it safe, or I could have made the pass for the championship. I got caught off guard. There was a little rock on that lip. Next thing I knew, I was on the ground. That one freaked me out a little bit. I just rushed and got up as fast as I can. Before that, I felt really good. I was clicking off the laps. I had a couple open opportunities where I could have put my front wheel in there, but I feel like if I had done that, he would have came back probably harder. So, I’ve got to expect that, and that’s fine. That’s racing, and the position he’s in. So, I played it safe until obviously I crashed.”

With Eli Tomac wrapping up the 450SX championship in Denver, and Jett Lawrence wrapping up the 250SX East title the week before in Foxborough, the Craig versus Hunter Lawrence battle is all that remains coming into this weekend. Craig was able to recover well from the mistake as he methodically worked his way from sixth to third to keep the points gap at a fairly large 18-point advantage. That means Craig just needs to finish 14th at Salt Lake City this weekend to guarantee the title in his favor no matter what Hunter Lawrence does ahead of him.

It seems like a fairly easy number for Craig to reach given that he hasn’t finished off the podium once this year, but this is also another East/West Showdown. The competition will essentially be doubled, and Craig won’t have it so easy if he finds himself near the back of the field early on. That being said, he was able to cruise to a second-place finish at the Showdown in Atlanta. It really comes down to Craig being able to just do 15 minutes plus one lap at a comfortable pace and this title should be his.

The last time we saw the championship lead swap hands at the finale, it was at the hands of Adam Cianciarulo. While running a comfortable third in a position to lock up the 250SX West crown, Cianciarulo caught a rut wrong and hit the ground just awkward enough to bend his bars quite severely. Cianciarulo remained on the track rolling around the rest of the main event hoping against hope that the title wouldn’t slip away, but Dylan Ferrandis went on to take the race victory and stole the championship away from Cianciarulo in the process.

That is the big thing that Craig needs to avoid in Salt Lake City. A bike malfunction or damage to the motorcycle in a crash may be the only thing left in his way. And if it does end up happening, Craig would certainly end up forever haunted by the rock in Denver that prevented him from the opportunity to wrap up the crown early.