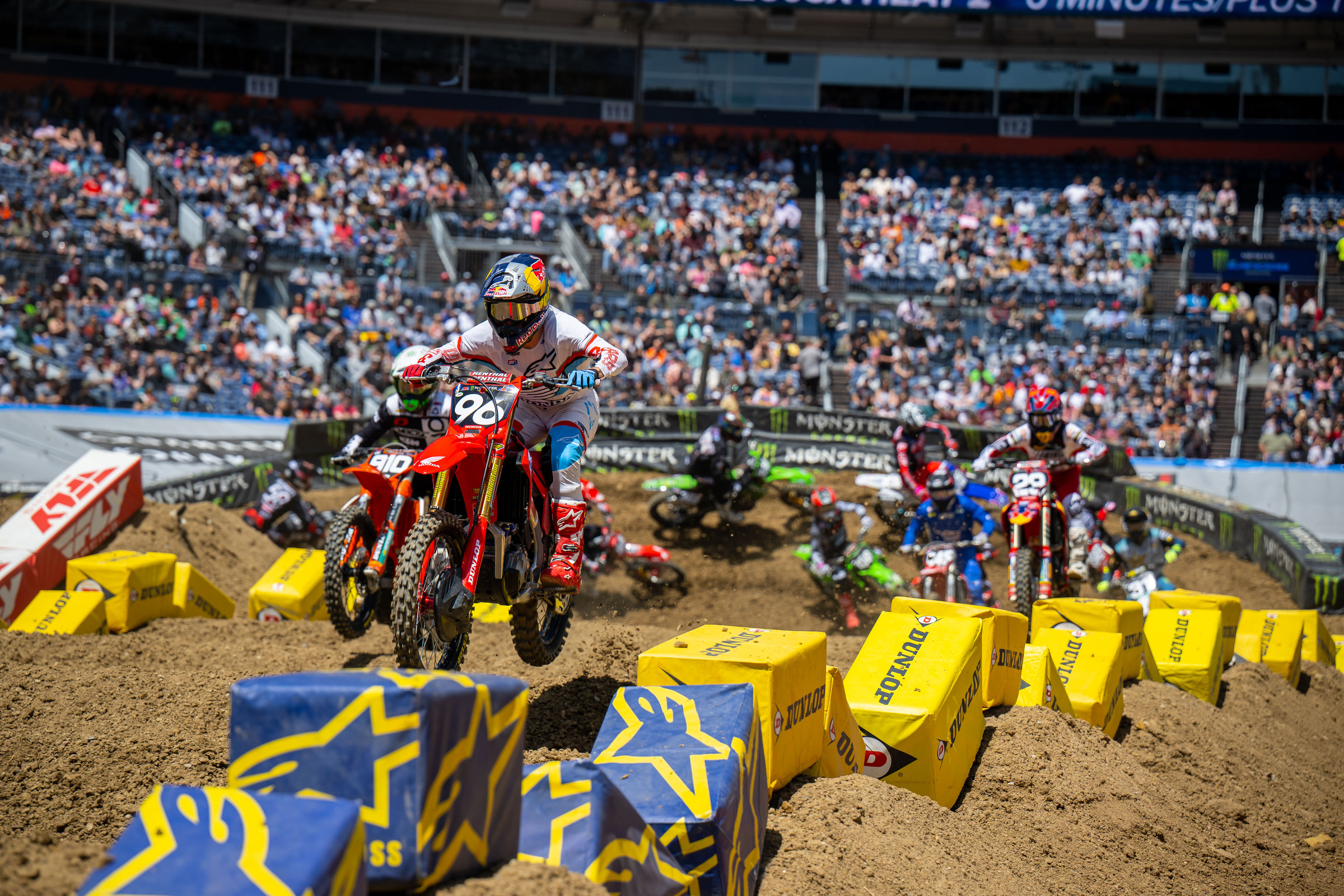 The 16th round of the 2022 Monster Energy AMA Supercross season has come and gone. Both classes provided several talking points from passes, crashes, track conditions, elevation, and privateers. As such, we fired off some questions to long-time professional racer Jason Thomas to get his take on all things Denver Supercross.

Um, can we talk about this dirt?

The dirt could have been great! I walked the track at around 8:45 a.m. and it was in great shape. There was still another round of qualifying practice that needed to be run but I remember thinking “as long as they continue watering from here, we will have a nice racetrack for the afternoon.” Apparently, they stopped watering because the next time I was down on the stadium floor at around 12:30 p.m., things had changed considerably. The sun was beating down on the Denver adobe and all moisture had exited the building. We were left with a hard, crusty, dusty track that didn’t race well nor come across well on television. Somewhere along the line, there was a missed watering window. When the dirt is as hard as Denver’s is and the wind picks up like it did, you simply can’t be late with the water. So, to answer the question, it wasn’t the dirt, it was the lack of water. What could have been good was lost at around 11 a.m. local time.

Do you think the shortened schedule with less practice mattered at all?

I don’t. These riders are so talented, they have the track figured out very quickly. Further, this track was very basic in design and didn’t require much thought or creativity to put in the fastest laps. With very straight forward rhythm sections and a cookie-cutter layout, the shortened schedule was a nice fit.

I enjoy being up and at it early and I also enjoy finishing the night early. Those are both net positives. But I also think there is less excitement when the racing kicks off in the afternoon. Having the dramatic effects that the nighttime festivities bring simply outguns the daytime events. The fireworks, fireballs, lazer shows, rider videos, and national anthem phone lights simply hit differently when the sun has gone down. Give me the nighttime vibe every time.

What is it like for Christian Craig to try to play defense right now?

I am sure it’s frustrating but make no mistake, he’s in the catbird seat. If at any time he would like to trade places with Hunter Lawrence, I am sure that would be met with immediate compliance. All he needs to do is cruise around during SLC’s main event and he is your West Coast champ, not to mention half a million dollars richer or so. I think Denver was the weekend where there was a valid reason to take some risk and try to lock it up then and there. This weekend should be all about conservatism and avoiding drama. If you really wanted to get dramatic, you could assign one of his teammates to ride shotgun (just ride behind him) the entire main event and give some cover if needed.

Do we bother doing the math on Hunter Lawrence crashing out of Anaheim 3?

It’s definitely a real storyline but things also change when you give out a huge points lead. I believe it alters the approach by the points leader and also removes any pressure from the chaser. Hunter has ridden stress free for weeks because of that crash while Christian has ridden cautiously. That dynamic is very common in these scenarios. It reminds me of the 2003 premier class championship when Chad Reed went on a six-race winning streak to close out the series while the eventual champ Ricky Carmichael frustratingly limped into the title. Reed was able to race down the stretch without any worry of a crash or issue while Carmichael needed to consider every possible negative outcome. It’s the same situation as this West Coast championship, just flip the OEM’s and fast forward 19 years.

Amazing season for Eli Tomac and Monster Energy Yamaha Star Racing. Did you see this coming?

I did not. I was willing to consider him a serious contender for this title, but I did not expect him to be the best version of himself. He was better in nearly every aspect of his racing. He qualified better, started the season better (best January of his career), his starts improved dramatically, and he didn’t have outlier bad nights. The only real issues he suffered for the whole season were a slow start at the opener and this recent knee injury. Otherwise, it truly was smooth sailing for the #3. Both he and Monster Energy Yamaha Star Racing deserve a ton of credit for revamping an already stellar career. He’s like Jennifer Lopez, just when you think her best work is behind her, she comes be-bopping onto the stage in a sun dress and blows your wig off.

Does this settle the "it's all about the bike settings" once andfor all?

You would have to ask a “Steve Matthes” about this one. He is the authority on bike settings and their relative effect.

Eli suffered a knee injury at Atlanta! Does that settle whathappened at Foxborough? Are you worried about the Lucas Oil AMA ProMotocross Championship?

It does! We all wondered what the heck was going on, but this clears things up. I don’t think it’s a great answer because now we are concerned about the summer (as mentioned) but at least we aren’t scratching our heads as to why he looks so off in recent weeks. I hope he gives us more detail as to the nature of the knee injury, but I guess we should be happy to get any insight at all when it comes to that camp.

Any idea on how Chase Sexton can stop doing this crashing?

At some point, there is a reckoning. It either comes from his own unwillingness to push the edge after crashing too often, or he grows out of it. The latter is part of a maturation process where the pace becomes more manageable and not so prone to a mistake. Right now, it seems he’s on or over the edge far too often and paying the price for it. That’s a bit more Trey Canard style in his approach and I think he is aiming to find more of a Ryan Dungey/Ryan Villopoto level of tranquility. He is a bit higher in the volatility meter than I think is sustainable. One way or another, these things work themselves out. The variance in how that resolves itself is pretty drastic, though.

Jason Anderson. Just talk about his performance this season.It's been a good one.

This championship wasn’t lost because he wasn’t fast enough, aggressive enough, or strong enough. It was lost on his worst nights. On his best nights, I think an argument could be made that he was the best 450 Supercross rider on earth. That’s high praise and something he should be very proud of. The tough part is that the bad nights were too bad to offset the good. Further, he was up against Eli Tomac in arguably his best season ever. Had Tomac not been so great, I think it’s very likely that Anderson ends up your champion. He was certainly deserving on many nights and it’s tough to argue that his current pace isn’t the best we’ve seen. When he looks back on the year, he will likely wince at the Anaheim 1 run in with Justin Barcia, the Arlington and Daytona run-in’s with Mookie, and the unforced errors at Glendale and Anaheim 2. Hopefully, he can look past those and see how great he has been, though. Just because he isn’t the champ doesn’t mean this wasn’t his best season ever. I would say he’s much better in 2022 than he was in his championship year of 2018. I know that doesn’t really make sense, but I believe that this Jason Anderson wipes the floor with the 2018 version.