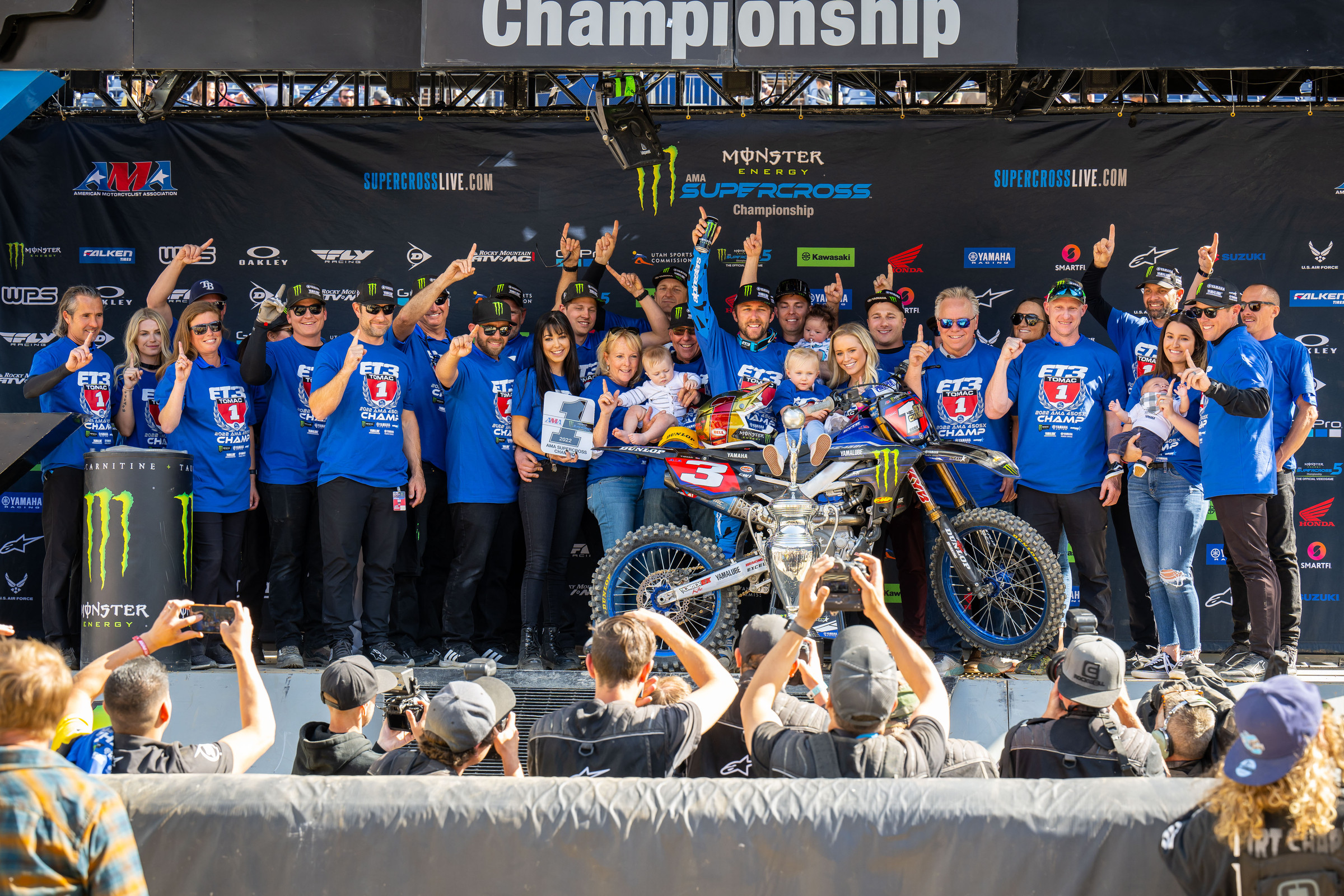 On Saturday, Eli Tomac claimed the 2022 Monster Energy AMA Supercross Championship in front of his home crowd in Denver, Colorado. Following a successful run with Monster Energy Kawasaki (the 2020 450SX title and three consecutive Lucas Oil AMA Pro Motocross Championship titles in 2017, 2018, and 2019, plus lots of wins in both SX and MX), Tomac made a gamble to sign with the Monster Energy Yamaha Star Racing team last season—before they had even won a single race as the factory 450 Yamaha effort. Eventually, Dylan Ferrandis went on to win a handful of rounds of Pro Motocross then the title, showing the bike (and team) was capable of winning. Still, Tomac had to fit with the bike and find comfort himself. In his first year with the team, Tomac earned his maiden Yamaha wins of his own—seven of them through the 16th round thanks in part to a five-race win streak mid-season—and he claimed the 2022 title with one round to go. When the Colorado native won the 2020 450SX title, it was at the end of the Salt Lake City seven-race run in Utah without fans. This time he was able to celebrate with fans in the stands cheering.

With ET3 claiming the title on a Yamaha YZ450F, it was Yamaha’s first premier class AMA Supercross title since 2009 when James Stewart was crowned champion. Following the main event, NBC pit reporter Daniel Blair caught up with the two-time champion to talk about his season in a one-on-one press conference.

Daniel Blair: This has been really fun for all of us to watch you this year, and mostly just watch your response to your victories and now to your championship. I just want to start off by saying congratulations.
Eli Tomac: Thank you. It’s really unbelievable. I think back to deciding to make this change and aligning myself with the team and crew that we have. You dream about doing these things, but then for it to actually come into real life, it always makes you speechless. It wasn’t the exact finish of these last couple races that I wanted. I wanted to give the Denver fans more. Once again, they were the best crowd that we’ve had all year. Just the most engaged into the race, and they follow the race so well. I want to give so much thanks to my team and my crew. You think back about the work you put in. I’m so grateful to give them this big trophy.

In 2020 when you got the win, it was an empty stadium. It was still meaningful. It was your first one and you had family there, but you mentioned the crowd. What was it like for you to know that this crowd was screaming for you from the first corner of the heat race to that checkered flag and that title? You had an entire area that was here to see you do this. Just take me through that emotion, knowing that you get to do this second one with all these people here and just celebrate and live in that moment.
To be honest, it almost puts more pressure on you because they follow you around the track and you hear them the whole time. It’s like, is there a guy that’s going to be on you in that turn, or what’s going on? But they follow you around. Like I said, it’s so cool to see that Denver crowd engage in the race like that.

What was today like for you? Just from the moment you woke up until you got to that main event? The noise from outside, but the family, the team around you? What was the mood? What was the demeanor all day today as you were getting ready to do this?
To be totally honest, I was pretty calm. Just one, for where I was and the points position that I was in. Two, I knew physically I could get through it. I was more freaked out at Atlanta and in Boston because my knee was jacked. It still is not great. So, I was pretty stressed out right there. I didn’t ride this last week at all. So, today when I woke up it wasn’t crazy stressful, but like I said, those past two I had more worries on my mind.

We talked before the season started. I had a great conversation with you, and we talked about the risk going to Yamaha. They hadn't won in a long time. They didn’t have the victories, the podiums, the championships, but you told us that you did your homework. You knew the personnel, and this was going to work for you. Now that it’s all done, and you look back on that decision and that gamble that you did take, you’ve got to take me through what you’re thinking now knowing what you were thinking then when you made that decision.
I think I was in the position to make those decisions and try to align myself with those people in the crew. It worked. They were able to provide me with the tools that I needed. We are all on the same page that way, and that ends in good results.

This one might be hard to answer in the moment. I know there’s discussions and there’s things you’ve got to work through, but do you want to keep racing? Do you want to do this more? Do you feel like there’s more in there, at least from the want side?
Yeah. I’m not saying I’m not racing next year. I’m trying to sign my next year right now, actually. That’s in the works. So heck yeah. I want to keep going.