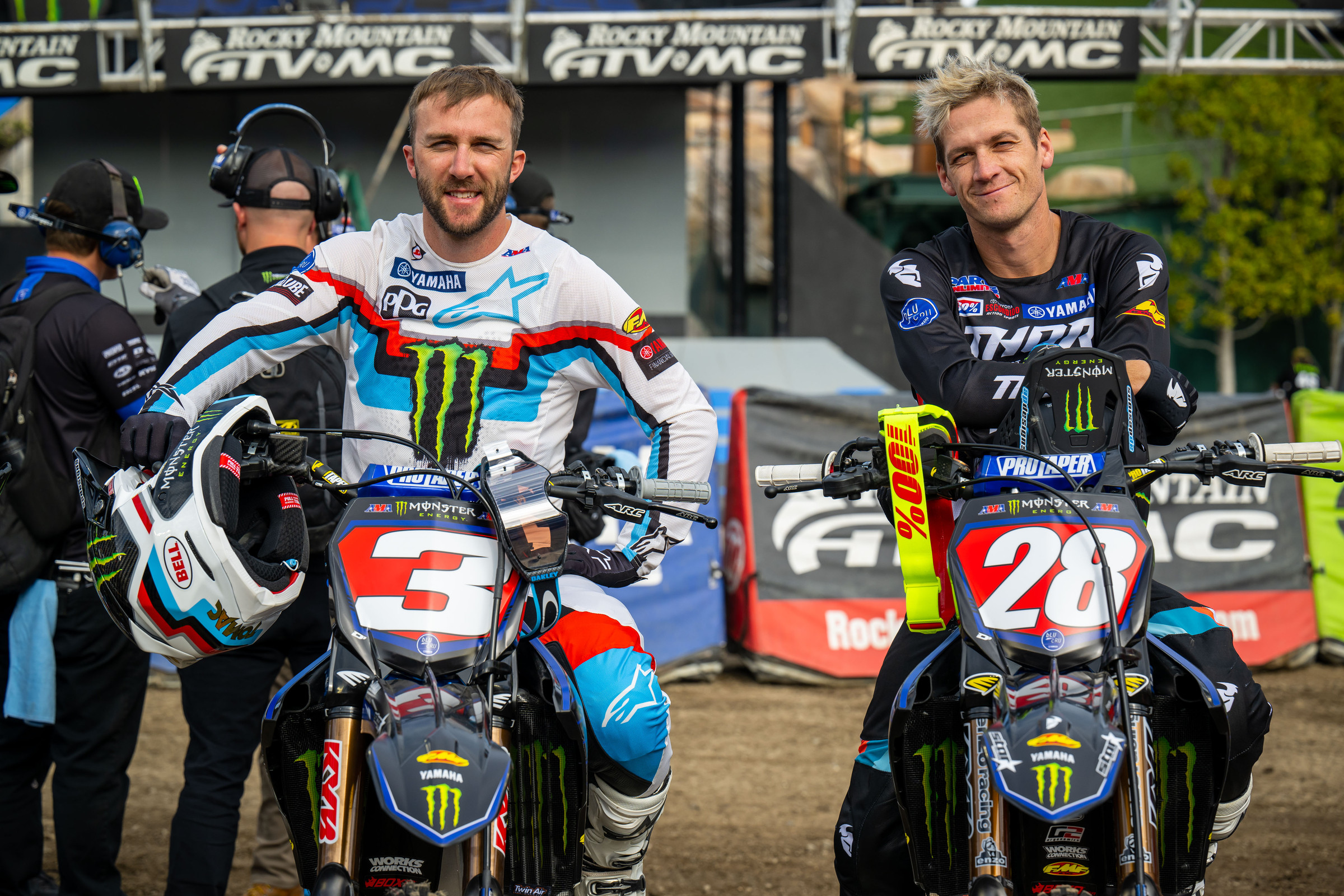 Eli Tomac had a pretty good shot at clinching the title last week in Foxborough, but Jason Anderson decided he wasn’t going to let that happen. This week, however, Tomac taking home the title is almost a sure thing. With just two races remaining Tomac has a 43-point lead on Anderson, and as long as that lead is at 26 or higher when the checkers fly in Denver, Tomac is the 2022 Monster Energy AMA 450SX champion. So, if Anderson wins, Tomac simply has to finish 14th or better to win the title. Note: the last time Tomac finished 14th or worse was the 2018 Indianapolis Supercross—he has made 71 starts since then and has finished better than 14 in all of those starts. If Anderson takes second, Tomac needs 17th or better. If Anderson is third, 19th or better will do it, and if Anderson is fourth, 21st or better does it for Tomac. If Anderson is fifth, Tomac simply needs to come in last. Tomac could have multiple crashes and still get 14th with his brake lever tied behind his back, so expect to see Tomac earn his second 450SX title this weekend. –Aaron Hansel

If any 450SX riders want to join the winner’s club this season the timing could not be any better. A large chunk of talent is on the injured list, and Eli Tomac, who was rolling so hard earlier in the year, has shown he’s not willing to dice it up at the lead if it means riding on the edge. At least not until the title is secured, anyway, which it will most likely be this weekend. So if you’re a winless 450SX rider so far this season, you better drop the hammer if you get a good start—you may not have another opportunity. –Hansel

In the 250SX west region Tomac’s teammate, Christian Craig, has a shot at wrapping up the title this weekend as well. Michael Mosiman is technically still in it, but he’s trailing Craig by 36 points and isn’t really a factor. Hunter Lawrence, however, is. He’s facing a 23-point deficit to Craig, which means all Craig has to do is gain three points on Lawrence and this title is done. In other words, if Craig wins the race, he wins the title. If he takes second, he’d need Lawrence to finish fourth or worse. If Craig is third, Lawrence would have to finish fifth or worse to handle the title to Craig. If Lawrence is able to beat Craig, he keeps this thing alive for another week. –Hansel

We talked about the math in the entry above, but there’s more to be excited about than the simple nuts and bolts of the situation. The actual racing between Craig and Lawrence has the potential to be epic! This is the last 250SX West race before the showdown, and you know both riders want to finish things off with a win. Plus, if you’re Lawrence, you probably don’t take too kindly to all the man-amongst-boys bench racing that’s gone on in regards to Craig and the rest of the 250SX West Region lately. And finally, Craig of course wants to win, and he’s got the added motivation of sealing a championship if he does. Who thinks these two are going to go hard for the W once the gate drops in Denver? –Hansel

Michael Mosiman has had some pretty good rides this year, and even notched his first career win in San Diego. Unfortunately, his season has also been marred by small mistakes that have prevented him from being a consistent podium guy. As a result, he’s not even close to being within striking distance of the championship. However, he’s still capable of getting another win, and if anyone is going to break up the Craig and Lawrence show this weekend you’ve got to think it’d be Mosiman. Does the Troy Lee Designs/Red Bull/GasGas Factory Racing rider get back on top in Denver? –Hansel

Calling Nate Thrasher’s season a disaster wouldn’t be fair, or completely accurate, but it’s safe to say it hasn’t gone nearly as well as his 2021 foray. The Monster Energy Yamaha Star Racing rider won two races in 2021 and took another top five. So far this year he hasn’t be able to get any wins, and has yet to land on the podium. Racing at this level isn’t easy, but you’d think someone with wins on his resume would be snagging the occasional podium. Does he get back on the box in Denver? –Hansel

When Honda HRC’s Chase Sexton clicked off his maiden 450SX main event win at the San Diego Supercross in January, it appeared more wins were right around the corner. Unfortunately for the #23, that has not been the case as he has yet to return to the center of the podium since. But that does not mean Sexton’s season has been a waste: he has the third most main event podiums this season behind Jason Anderson and points leader Eli Tomac, and the 450SX sophomore is getting more experience each and every week. He has strung together a few rounds of being the fastest qualifier and winning his heat race on the same day. Could today be the first time he tops all the boards by going P1 in qualifying, his heat, and the main event? Tune in this afternoon to find out! –Mitch Kendra

Cooper Webb has put in a valiant effort this year in one sense, as he crashed and missed St. Louis but then returned in Atlanta. That’s the good news. The bad is that he’s been fading at the races after nailing good starts, drifting to fourth in Atlanta and sixth in Foxborough. Seeing the man with the #1 plate struggle this year has been a strange sight, even before he missed St. Louis, he was just not on the same form we saw last year. With no wins so far in ’22, what should we expect from Webb at the final two races? –Jason Weigandt

Weird schedule, weird weather, and of course weird elevation in Denver. This race starts earlier than perhaps any supercross ever, at 1 p.m. local time, which was supposed to force the riders into a Friday practice schedule for the first time since Friday practice went away back in 2006. Then the weird weather came in via hellacious winds, which led to a cancellation of all the Friday stuff. So now the riders have less practice then usual with just the abbreviated Saturday schedule, plus it’s super early (riders were at track just after 7 a.m.) and really cold. Oh, and elevation will impact the bikes and bodies. Lots of variables to track here in Denver. Who will adapt? –Weigandt

In most things, being third best in the world is a heck of an honor, but the top talent in Monster Energy AMA Supercross considers anything less than a title a failed season. So, we’ve got a huge points battle brewing for third that might not even matter, unless there’s some hidden top-three bonus money in a contract. The contenders? Justin Barcia is third, three points ahead of Malcolm Stewart, who is six points ahead of Marvin Musquin. For Barcia and Stewart, third would be a career high in supercross points. These boys might say they don’t care about anything but a title, but you know they would rather be top three than just top five. Who wins in this two-round sprint to the end? –Weigandt