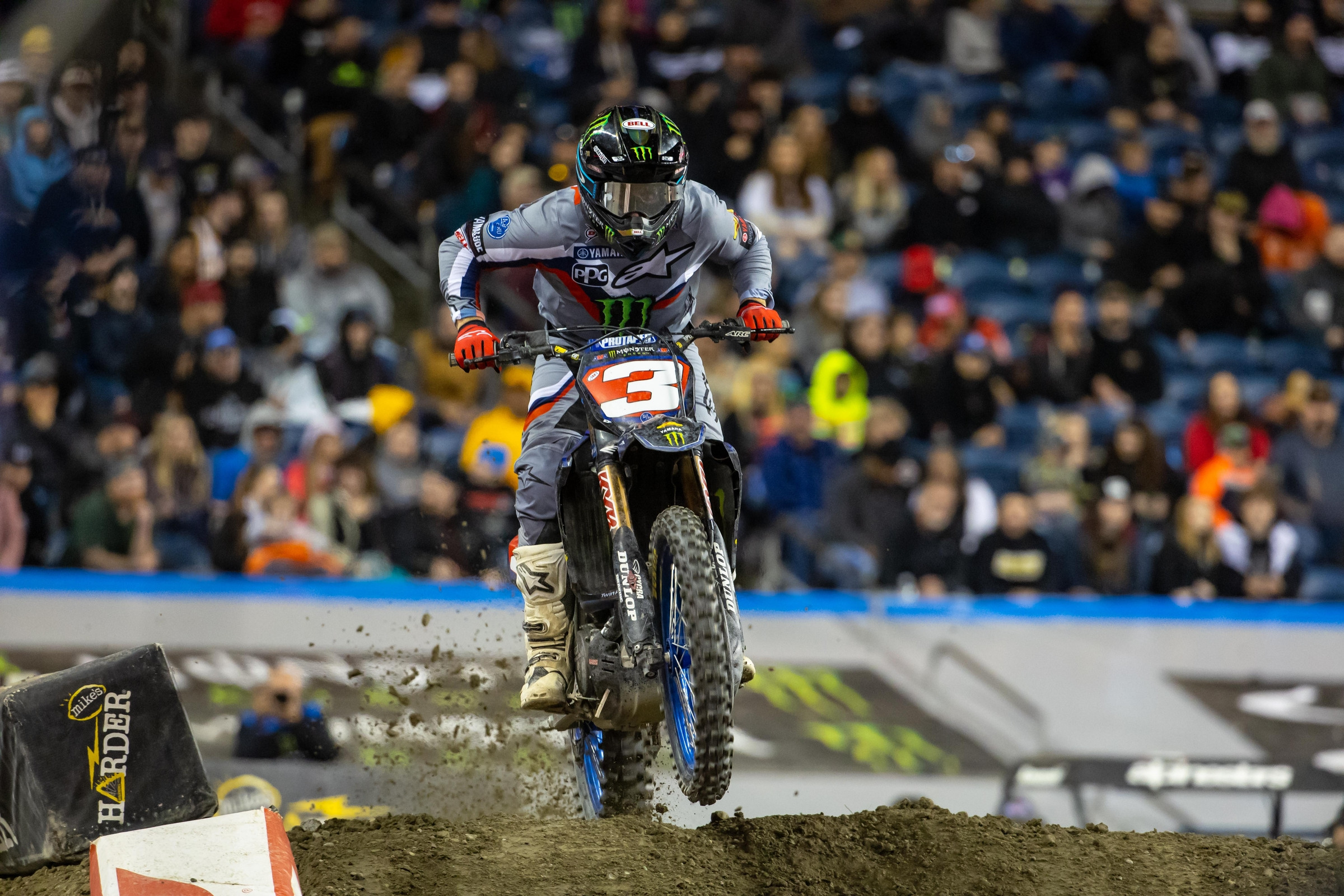 When the series left off in Seattle, Eli Tomac had just rattled off his fifth consecutive victory. The win boosted his points lead to 54 and tied him with Chad Reed on the all-time wins list at 44. With the way things are going for Tomac, it sure seems like there isn’t much standing between him and his sixth consecutive win and leaving Reed behind on the all-time wins list. Then again, winning streaks, even for the greatest riders of all time, get harder to maintain the longer they get. Will Tomac’s onslaught on the record book continue in St. Louis? –Aaron Hansel

Riding hurt is the norm in supercross, and there are plenty of guys who really needed the week off to recuperate from nasty crashes. Chase Sexton is on the forefront of that list. Sexton has been slammed more times this season than a basketball in the NBA dunk contest. He had a particularly big get-off during qualifying in Seattle too, which caused him to miss the rest of the day. Expect Sexton, as well as everyone else who was banged up, to be doing track walk with a little extra bounce in their step this weekend. –Hansel

Malcolm Stewart sure has been close to getting his first career 450SX win this season, but for multiple reasons, it just hasn’t happened yet. Now, with only a handful of races remaining in the season, his time may be running out. He doesn’t quite have the pace of Tomac, but on any given night he’s been about as fast as anyone else, which means he could get it done if things line up just right. You know Stewart wants to punch through, so expect him to be giving it everything he has at these last few races. –Hansel

The race for the championship lead may not be close, but the confines are tight between second and fourth. Jason Anderson sits second with 227 points, Justin Barcia is third with 222, and Stewart trails Barcia by a mere point. When’s the last time you can remember when second through fourth were only separated by six points with just five races left!? All three riders have taken turns beating each other this season, and there’s been no love lost out there between them either. At this rate it’s anyone’s guess how this order will stack up following St. Louis. –Hansel

Dean Wilson’s been one of the most consistent riders of 2022. The Rockstar Energy Husqvarna Factory Racing rider has been, except for two races, between 12th and 9th at every single race in 2022 up to and including Detroit. But Wilson broke his trend in Indianapolis and Seattle, taking seventh in both rounds. How funny is it that even when he’s breaking a trend in consistency, he’s doing it by improving to seventh, two rounds in a row? Will he climb higher in St. Louis? –Hansel

Sure, there’s only been one 250SX West race since the East last raced in Indianapolis, but with the week off, it seems like forever since we’ve seen the likes of Jett Lawrence, Cameron McAdoo, Pierce Brown, RJ Hampshire, and the rest of the boys out East line up. As it stands, the series looks like it’s Lawrence’s to lose, as McAdoo crashed in press day on Friday and is out for today. Lawrence was entering today's sixth round of 250SX East with an 11-point lead on McAdoo, but with the #48 out, Lawrence enters with a 38-point advantage over third-place Pierce Brown. McAdoo's crash and shoulder injury has significantly impacted the championship as Lawrence now has over a full race lead on the competition with only four rounds remaining. –Hansel

Pierce Brown is 38 points back of Lawrence, so while he’s not technically out of the championship, he’s not really in this thing either. But that doesn’t mean can’t still make waves up front. The Troy Lee Designs/Red Bull/GasGas Factory Racing rider is in the midst of an extremely good year and has been strong lately, taking fourth, third, and fourth at the last three races. Clearly, he’s got some things figured out this season, and with the volatility that’s so often present in the 250SX Class, especially in the Triple Crowns, it’s not outside the realm of possibility for Brown to be in the right place at the right time to snag a win if the situation presents itself. –Hansel

Red Bull KTM’s Max Vohland is set to make his return to supercross following injuries sustained at the opening round of the championship. Vohland’s crash and injury came on the opening lap of the Minneapolis Supercross, which was only the fourth 250SX main event start of his young career. Vohland recorded a career-best sixth at the Houston 3 Supercross in 2021, can he improve that mark this weekend when he lines up for his second gate drop of the season? It will be his first career Triple Crown event. How will the three-race format treat him? –Mitch Kendra

The 2022 St. Louis Supercross track layout is similar to the layout for the last race St. Louis Supercross in 2020, where a sweeping left-hand start sets riders up for options to go big in the first rhythm lane. Just like in 2020, a flat, left-hand sweeping turn will take riders to a tunnel jump, but at this year’s event, a standard supercross triple will follow, not the finish line. A tight 180-degree left-hander will put riders in a pick your poison situation: leave the door open going outside or roll the first jump from the inside of the turn. After going under the tunnel jump, this is where the track builds will vary significantly. The 2020 version saw a right-hand turn right into the only whoops section, whereas the 2022 version will see a right-hand turn through sand that leads to an off camber turn behind the starting gates. Although the location of them will differ from the 2020 layout, the whoops for this year’s event will look to be another long set and as Jason Thomas pointed out on Thursday in his track preview, the whoops are followed by a U-turn before the finish line. Watch for that whoop section and last turn to be a key spot for last turn passes all day long. –Kendra

And throwback to the 2020 event where Malcolm Stewart did this in the whoops in his heat race!