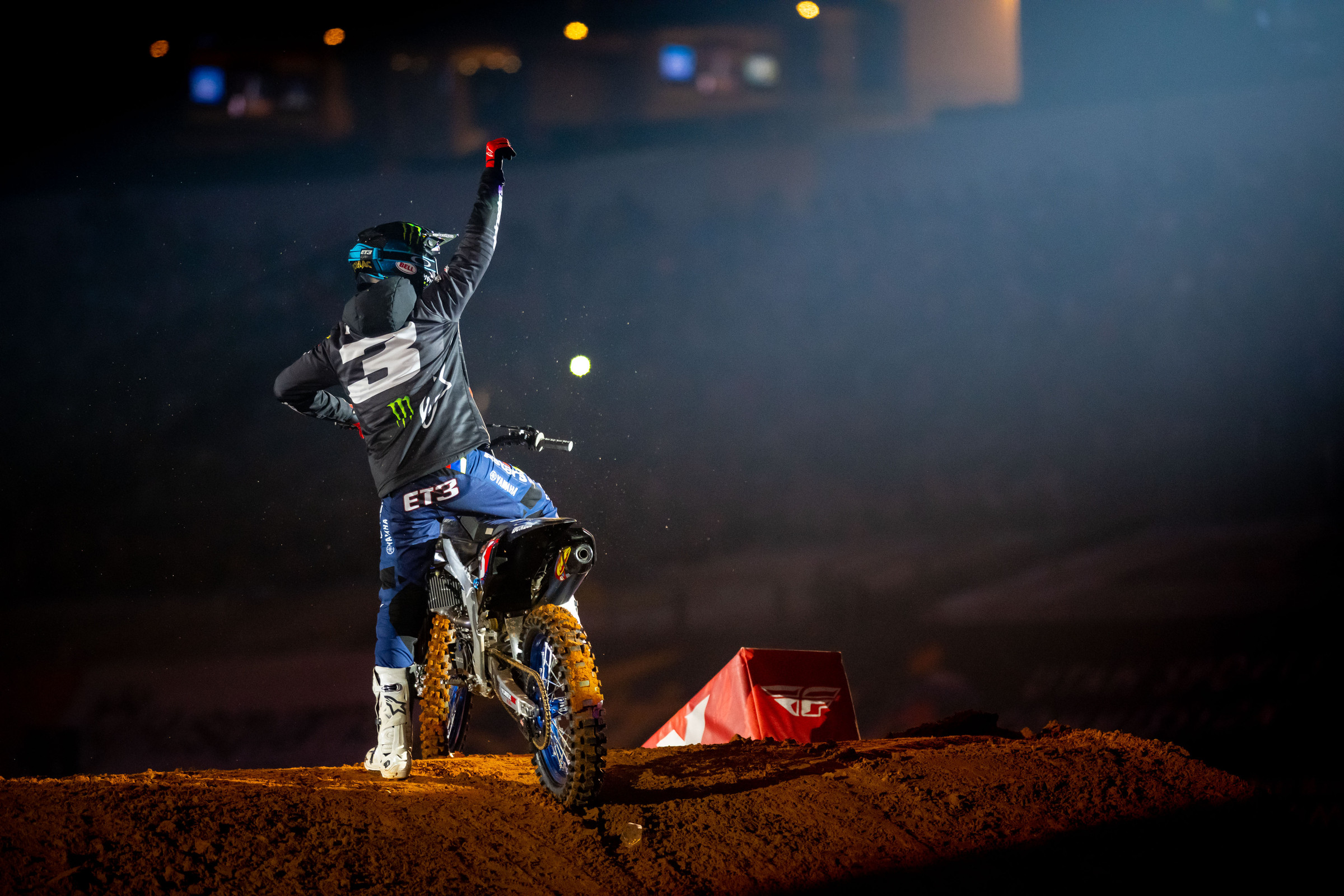 Stat of the Week: Tomac Gets to 40

And with the win, Tomac became only the sixth different rider in history to claim at least 40 AMA Supercross premier class main event wins, joining some elite company.

Today's #Supercross stat of the week: Eli Tomac did not win any of the Arlington Triple Crown races, but he finished 3-2-2 to earn the overall. He became only the 6th different rider to earn at least 40 career premier class main events. #SXHistory#SX2022#2022ArlingtonSX

Tomac’s next win will tie him with Kawasaki legend Ryan Villopoto for fifth on the all-time 450SX wins list. How soon will he get there?

You want to take about the Triple Crown format creating some great racing...with Forkner, Lawrence, and McAdoo winning the three races tonight, that is the 6⃣th time in 1⃣0⃣ 250SX Triple Crown events that have had 3⃣ different race winners. #Supercross#SX2022#2022ArlingtonSX

He won the first Triple Crown race of the night but without winning the overall, Cooper Webb now has eight rounds this season without a 450SX main event win as he continues to sit in his longest winless drought since earning his first 450SX win in 2019. He did finish on the overall podium with 1-4-4 scores, picking up his second consecutive podium finish. When will the Red Bull KTM rider pick up his first win of ’22?

The American Motorcyclist Association (AMA) has posted its post-race penalty report from the Arlington #Supercross: the only noted incident was in the 250SX Class during qualifying where Lance Kobusch had his fast lap taken away for stopping on track. #SX2022#2022ArlingtonSXpic.twitter.com/FOlbcHXsb4

Unfortunately, Jerry Robin was sidelined with an injury and did not race. However, he did share some photos of his Texas Rangers inspired bike with us.

Quotes from the Paddock

"Round 8 in Arlington I guess was okay. I finished fourth overall with 4-3-5 moto scores. It wasn't ideal but I'm happy to be back racing after last weekend. I felt fine on the bike all day, but I didn't really execute that well with my starts, which didn't put me in a great position. In the second race, I didn't ride that well. I'm excited for Daytona since it's near home for me in Florida. It's going to be nice being back in the warm weather, and it's just time to get after it."

“It was a good night. We managed a fifth overall and it could have been better but honestly, it could have been a lot worse. I felt good in the first one, but I got tangled up with another rider and finished fifth. I had a really bad start in the second one, completely my fault, I blinked on the gate and put myself in a bad position. The lapped riders were kind of tough and I came in with one and stalled my bike going through the finish. In the last one, I had a decent start and just managed the race. The good thing about the Triple Crown is that you can kind of save yourself – it’s like a throw away – so I think we’re just learning. We’re on a good streak and there are a lot of positives, so we’re looking forward to Daytona, a home race for me.”

"It was a tough one! The first race was good, I felt good on the track I made some great passes and was pretty fast. As the track broke down, I just struggled a bit, and I didn’t get the best of starts in the second and third races, which made it really difficult. And when you get stuck in a little bit of groove, you just get stuck there. We need to go back to the track, do some training and come back swinging at Daytona. I love it there, it’s a fun place and I know we’ve got a good bike, so we’ll have a good time with the crew and be close to home, so that will be fun!”

“I had another good qualifying, but I struggled a bit at the Triple Crown with some crashes and mistakes. The bike was awesome, though, and I look forward to next weekend. We’re going to go back to work and get ready for Daytona.”

"My night wasn’t too bad, I felt like my riding was good and my starts have improved, which is something I’ve been working really hard on. Unfortunately, I washed the front in a slippery corner and ended up getting 13th in the second race, so that really hurt my points but we have some positives, and we’ll keep working until we get up there.”

“The race here in Dallas was a better start to the day. I felt a lot better about myself and was able to put in some good qualifying laps. I haven't been that far up on the board in a long time, so overall this was probably the first race where I was actually having fun. Come the night show though, that all turned around because of how slick the track was – they watered pretty heavily. I was really struggling with the bike and with traction, resulting in a lot of crashes which is very unlike me. It was another very frustrating weekend. I'm looking forward to Daytona, as it usually changes things up and makes for a fun track.”

“It was a crazy day and unfortunately I just didn’t perform today, even though I was leading the first Main Event and doing great until I stalled the bike and lost momentum. I just need to be better. It was a tough day physically and the feeling with the bike was just not good, so it’s especially tough when it’s a Triple Crown with three races. In the last race, I ended up going down off the start with someone else and got burned on the back a little bit and from there, it was done.”

"I'm feeling a little bit better on the bike as far as practice and qualifying go, but I'm still struggling. We have a few things to figure out; just to get more comfortable and get faster," Bogle explained. "The mains were rough. I had a crash and didn't finish the second one. Not my best day at the office. I definitely belong further up in the pack than where I've been, so we'll keep working to improve.”

“I didn’t feel great all day. I had a small crash in qualifying and hurt my elbow. In race one I did ok but rode sensible, in race two I gated well and felt stronger, we made a small change to the rear, and it was working. Unfortunately, I ended having two falls, one I couldn’t avoid as a rider crashed in front of me over a jump. I was happy to get up and get back to 10th. I have some things I need to work on, we improved the bike over the weekend, but I can’t afford these falls. fifth was great and we are within striking range of the top three. I want to be a podium guy and we will work hard to get there.”

“It was an okay day we’ll definitely take the positives and keep going with it. We definitely have the starts down and the riding is getting better. The team is coming to Baker’s [Factory] this week to work on some things and try to get a bit better for Daytona and hopefully we can go there and redeem ourselves from last year.”

“It was a tough day, but we didn’t quit, so I think we ended it off on a good note. We started the day off a little rough. In qualifying one, I crashed and knocked the wind out of myself, and it took me a little bit to get up. That kind of snowballed into Q2 and I had some mistakes in the first two races, so it was a tough day until moto three when I finally got off to a good start, put my laps down and rode like myself. Overall, it’s not the day we wanted but I’m just happy to rebound from the tough day that we had. Onto Daytona and let’s just get back to work!”

“Falling never helps as you can’t afford to lose anytime to these front runners. My riding during the week is so much faster than how I am racing. We will work harder this week and I am looking forward to Daytona.”