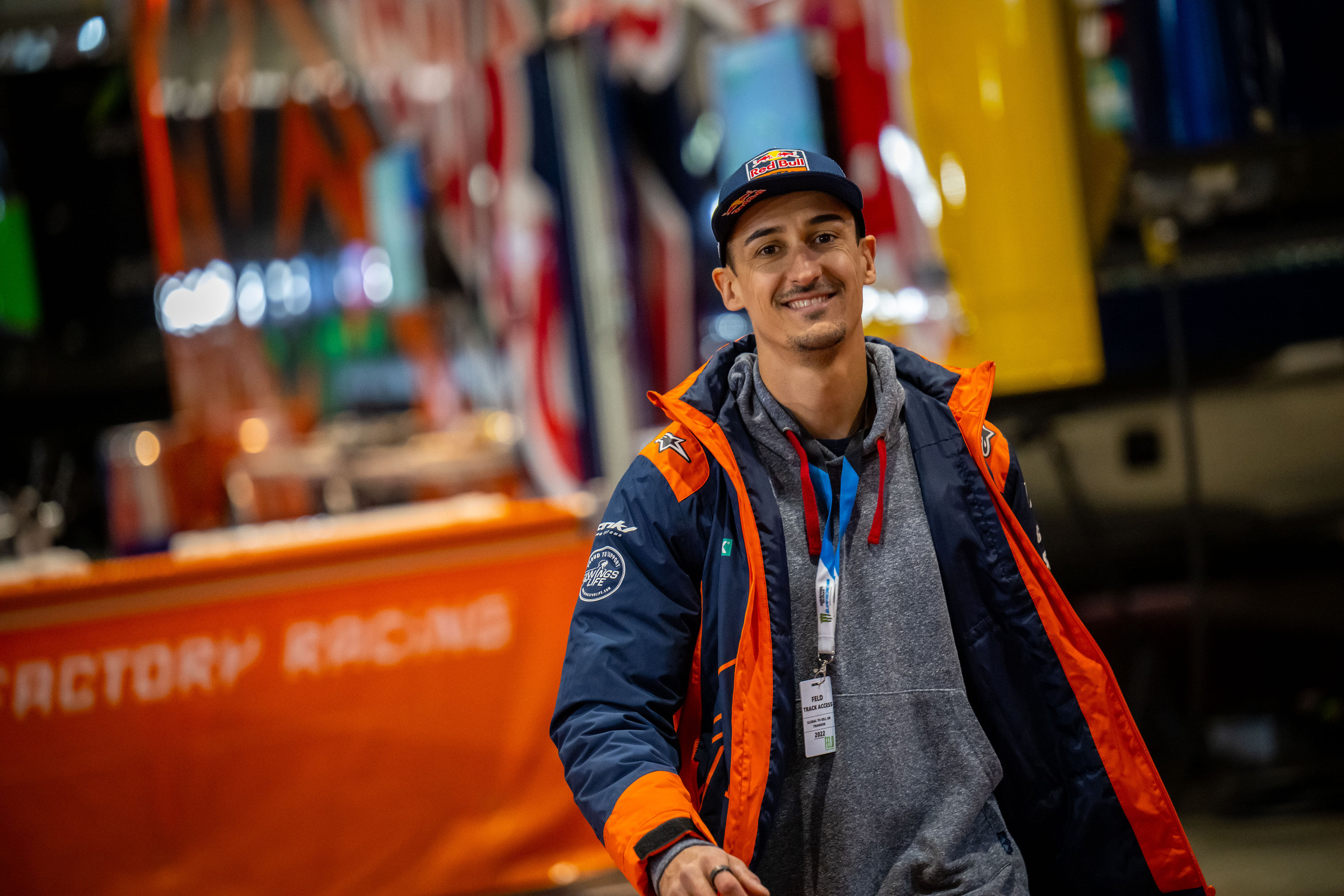 3 on 3 Time Zones and Time Off

It’s hard to believe, but we’ve already clicked off 12 rounds of the 2022 Monster Energy AMA Supercross Championship. After nearly three months of continuous traveling and racing, not to mention traversing different time zones, the riders and teams are ready for a break, which they’ll get before racing resumes in St. Louis on April 9. We asked the Seattle podium finishers about what it’s like to deal with time changes, and about the upcoming week off.

We’ve been on East Coast time for the last three races and now we’re on the West [Coast]. Does that feel different to you guys? Just that kind of a quick change where we’re going and starting main events three hours different than what we’re used to over the last few weeks? Is there any kind of feeling that you guys have throughout the day that feels different, energy-wise, awareness-wise?
Jason Anderson: To be honest, once you’re in the flow of the night show, I think your adrenaline is so high and stuff like that, that the night show is the night show. I swear, it could be 1:00 in the morning and that’s just the program. Your body just clicks into this mode and you’re just ready for whatever it has to throw at you.
Eli Tomac: We travel so much, your body has no idea what’s going on. Then race day, you’re just amped and ready to go.
Marvin Musquin: I agree with that. Like Jason said, you’re just in the moment and whatever time it is, you just look at the schedule and you get ready when it’s time to go for opening ceremonies and then for the main. I think we have our routine. For myself, I’ve been staying in California so obviously there was more travelling going to the East Coast. That’s the first year I’m doing that in a very long time. But at the same time, during the week I have a different program, so it didn’t really affect me. I was actually looking forward to going to stay on the West Coast this weekend with less traveling. That was nice.

Twelve weeks you guys have been on this thing. Obviously, the work won’t stop, but will you have a chance next weekend to do anything on the personal side, take a breather, or do you work straight through the weekend?
Anderson: We’re just trying to get ahead. Any opportunity we have to get ahead, we try. So, this week we’ll be back trying to get ready for the next series. We’ll be back trying to ride the road bike and go to the gym and stuff like that. Obviously, on the off-weekend it’s nice to have some personal time. I haven’t found out what I’m going to do yet, but stay far away from a dirt bike track, I’ll tell you that much. Even with an off-weekend, I don’t even know if it would bother us too much to just keep going and try and get the season over with. I feel like we’re in the flow. I’m cool with whatever. Weekend off is nice, but keep it going too wouldn’t be that bad at all.
Tomac: A weekend off is nice at this point. Travel just is what it is. I’m not doing anything special. Maybe not travel.
Musquin: I have a feeling you kind of want to enjoy the weekend off, but at the same time you don’t really want to get on a plane or whatever. We’ve been traveling so much. But at the same time, it would be nice to go somewhere and be off. But, I’ve always said that it’s good when you just keep on going because you have your routine during the week and then you travel at the same time going to the race and back. So, you get used to it. I know it’s hard on the body, but it’s our job. I really like every single weekend going racing, but it is seventeen rounds so it’s a lot. But it is what it is. We have a weekend off and we’ll do our best to stay sharp and come back and be on the podium again.

[You 250 riders had a] five-week break, which is odd. Now we have another kind of a break before we go racing in Atlanta. What do you guys do from now until then with the Pro Motocross Championship coming up? Do you start doing that? Do you stay on supercross? Got a kind of hybrid track coming. What do the next couple weeks look like?
Christian Craig: It’s tough for me because of the position I’m in [leading the points]. The five weeks was tough for me, just like I had to have that balancing act of riding enough supercross. I’m sure I’ll do a week of outdoors and hop on that 450 and do some more testing with that, but then get back and get going for Atlanta in the last three. So, a balancing act for sure for me.
Hunter Lawrence: You try to throw some outdoor days in there, and then obviously Atlanta is coming up. You definitely do a little bit more outdoors, but it’s not like sweep supercross underneath the carpet.
Michael Mosiman: I did a ton of outdoors already during the past five-week break. I’m not sure exactly what Wil [Hahn] is going to have up his sleeve for this next three weeks. I imagine I’ll do some outdoors. Starting in October, you have so much supercross base that I can get on and perform at a high level as I did tonight. I think I rode supercross four or five times or something, maybe. Maybe five times. Definitely going to put a lot of focus into outdoors and getting that big base for that and try to crush it there. Not out of it by any means in this championship, but I don't think that riding outdoors is going to affect my supercross.