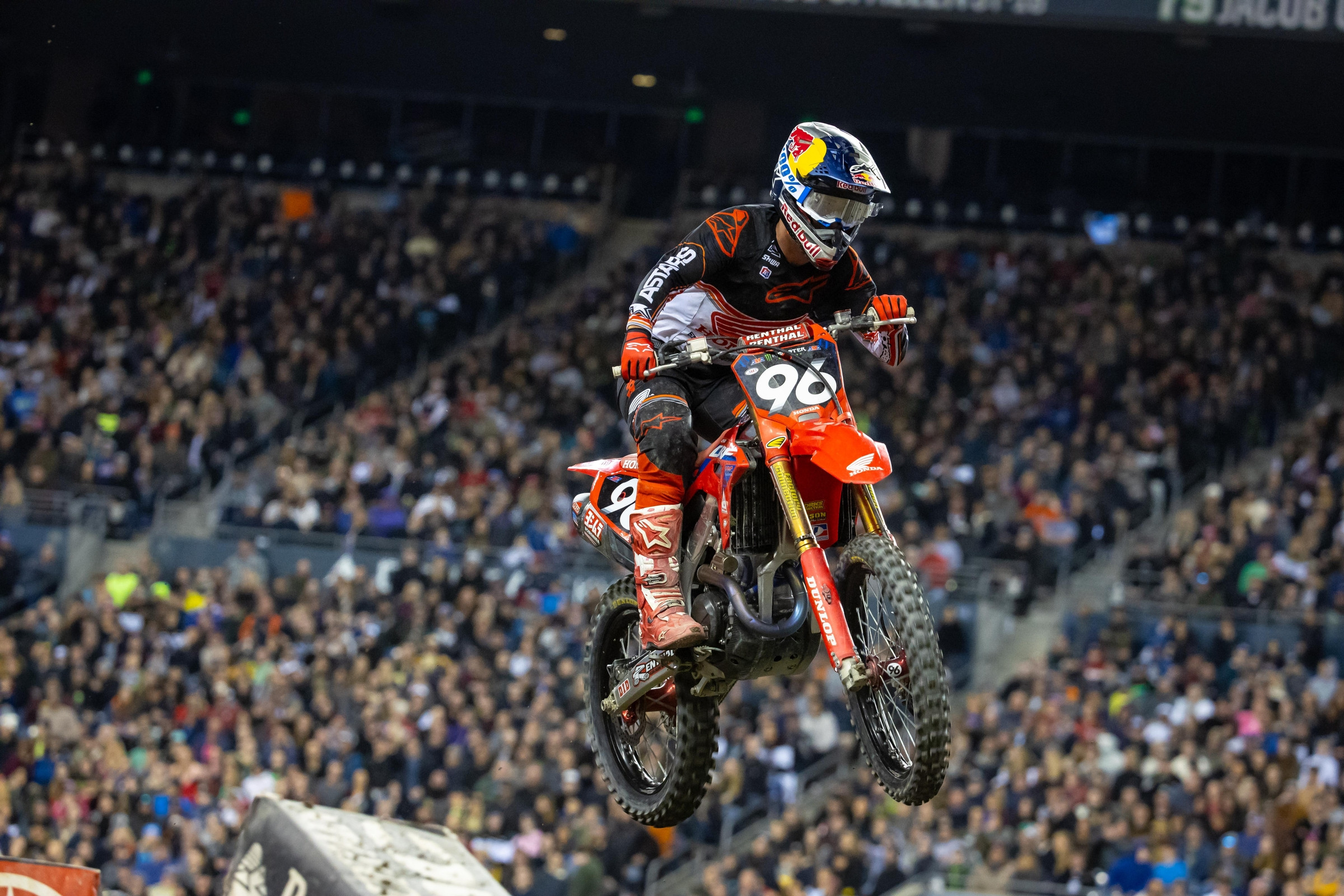 Honda HRC’s Hunter Lawrence held tough during a chaotic 250SX main event of Monster Energy AMA Supercross in Seattle. Michael Mosiman ran into Christian Craig early, knocking Craig down, and bent his brake rotor in the process. Lawrence took full advantage to take the lead, and while Craig tried to track him down late, Lawrence stayed steady (enough) through the gnarly whoops to hold on for the win. That’s two supercross victories this season and three for the career of Hunter. He spoke about it after the press conference.

Hunter, five weeks [off]. We talked about it on the podium a little bit. Last time we saw you at Anaheim, there was a big crash and we didn’t really hear what the five weeks were like for you. Can you kind of take us through? Obviously heard that you needed some time and were sort of prepping pro motocross. Played some golf, we know that. Just kind of take us through the five weeks that led to tonight.
Hunter Lawrence: Yeah, I had two weeks off just to let the body heal and stuff. I was a bit banged up. Kept pretty busy. It was good. We just kept working on a few things we felt needed to be better. It was cool to put them into action tonight.

Can you elaborate on those things? Is it bike stuff, physical stuff?
Just bits and pieces. Little technique things, little stuff like that. Weaknesses, obviously whoops, and just a few other things. We did work on the bike, so I feel like we just got a few percent better all around.

You started the west coast kind of unexpectedly. Was that a chance to get into the motorcycle a little bit more and just find some things without that pressure of the season?
Yes and no. It was good because we had Jett racing [250SX East], obviously. So, we found some stuff, like a few engine things. I over-jumped everything on press day by like five or ten meters because it was way faster than my practice bike. So that was good. Just learning a few things off of what they found with Jett.

Christian, are you okay with that?
Christian Craig: That’s fine.

Hunter, it seemed like you negated Christian’s strength tonight by picking up the speed in the whoops. You struggled throughout the day, and then during the main he was able to catch up to you but then you were able to gap. Explain your race tonight and how you were able to pick up that speed in the whoops. We were grafting all day, to be honest with you. Every session we were chasing the track, chasing the bike. We were making changes every session. It was kind of like a little nervous in-between. Not nervous, but you’re kind of making a decision not knowing what it’s going to do, so it’s a little nervous not knowing the outcome. So, we had to have a lot of faith in the team. We all worked really well and felt really good for the night show.

Did you see him use that right side of the whoops at all? Did you know that was his faster line where he was making up all that time on you?
No. I knew my line maybe wasn’t the best, but I knew how it would react to my bike. It may not have been the fastest, but I was thinking, if I can just be the most consistent line, that would be my line through there.

Obviously you’re older and you’ve got more experience, but in what ways are you different or better now than when you were winning MX2 races?It’s obviously a whole different ball game over here and stuff. My experience in supercross isn’t crazy. I’ve only done 17 main events. So, I’m still just learning. Honestly, I’m just trying to better myself every race night, learning. It’s honestly just trying to build and be better every time I’m at the race and during the week to become a better rider in the future. That’s what the end goal is. It’s not to be in 250. This is not focusing on everything to be a 250 guy. Everything is into the future [the 450 class]. That’s just what we’re trying to do, just be better every time we step on the track and on the motorcycle.

What do you do during the break before Atlanta? Do you do some outdoor testing?
You try to throw some outdoor days in there, and then obviously Atlanta is coming up. You definitely do a little bit more outdoors, but it’s not like sweep supercross underneath the carpet.