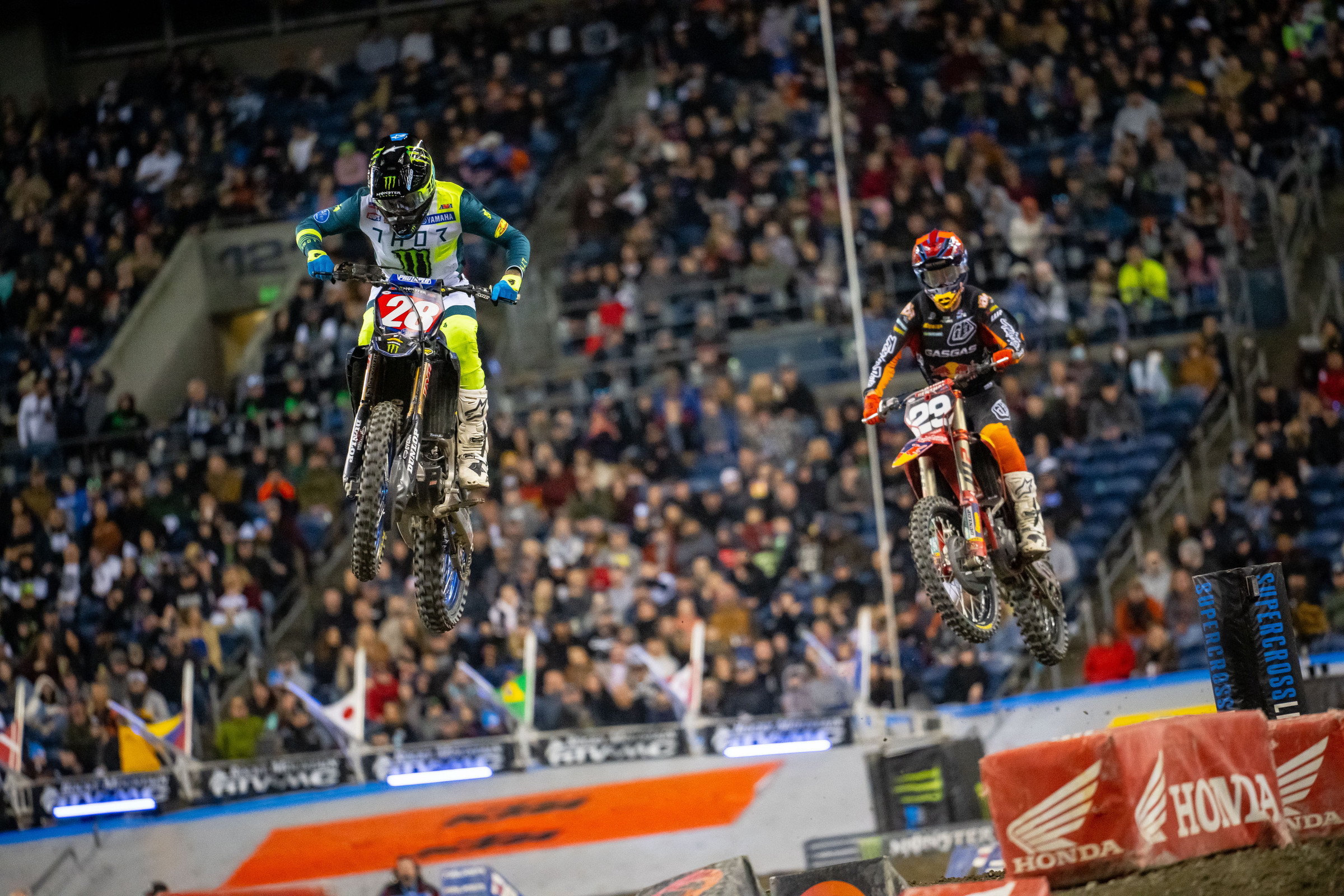 After a five-week break, points leader Christian Craig and the 250SX West Region field returned to action at the Seattle Supercross in Washington. Michael Mosiman took the top pole position in qualifying, joining Hunter Lawrence as the only other rider to top Craig in qualifying in 2022. The two were in separate heats—Craig won the first heat as Mosiman finished fourth in the second heat—and then the two got into it early in the main event when Mosiman bumped Craig to the ground in the turn before the finish line on the third lap. Mosiman went on to lead five laps before Hunter Lawrence eventually passed him, as did Craig after around the halfway mark. Mosiman held off a late charge from Jo Shimoda to claim the final spot on the podium. Following the race, Mosiman said he had an issue with his rear brake from his get together with Craig and it impacted the remainder of his race. The trio spoke to the media in the post-race press conference. Here is what Craig and Mosiman had to say about their respective nights.

Christian, you mentioned on the podium that you’ve been cleaned out three times. Do you feel that’s a coincidence or is this the way things are trending this year as you’re holding the red plate?
Christian Craig: Yeah, obviously the red plate, everyone wants that that I’m racing. It’s part of it. It happens. I was a little fired up after, but it’s racing. Just got to move on from it. I was happy I was able to come back from it and put in some good laps and actually challenge for the win at the end. It could have been bad, but I was able to salvage once again.

After the incident with Michael, you were able to get back on the bike and get going again. When you looked up, did you look ahead and think, I could get there? Or were you just trying to take it one position at a time with your passes?
At first, obviously, it’s like, let’s see how far I can get up. I knew I had a lot of time left. I think that was lap three or four. Then I saw these two battling. I had Nate and Jo in front of me, so I knew I had to make some quick passes before they got away. Then once I got by those guys, I got by Michael and just set my sights on Hunter. The track was gnarly. I can only imagine what the 450 guys had to deal with. I couldn’t really find a good spot in the whoops, like the blitzing line. I struggled. Kind of checked up there. I challenged Hunter a little bit and it just wasn’t enough. Learn from it and move on.

It looked like at some point you were catching right up. Was there a point when you said, I’m counting my points? This doesn’t matter? The track is rough. We’re in traffic. It’s getting a little sketchy. Second is good tonight, or at no point did you say that?
Kind of. I had a couple close calls once I got back to second. I got back into there and missed a few rhythms. I kind of checked up mentally. that track could bite you at any second. Kind of went on reserve, but then also hit my marks. I could have pushed it more, but I felt like I had to kind of back it down just a tad and I guess take second.

Michael, Christian said on the podium that he was sour about the pass. Christian, that’s not helping you being the old guy using words like “sour” when you’re upset! Michael, how did you feel about the pass and before and after and maybe thinking about it?
Michael Mosiman: I went and watched it back and it’s pretty impressive the speeds that people bootleg the race onto YouTube. I went on there and checked it out. It’s racing. I actually looked back to A2 when we battled and I raced him very, very clean and arguably I think my team and those close to me would say I gave him a little bit too much room where I could have. He knew I could have pushed the limit there as well. I remember he said something like, “That was awesome. Great racing, but I know more aggressive racing is coming.” That’s really just the general understanding I think that we have. Obviously, it’s never fun to be on the other side of that. But, I’m going forward. I’m going for the win. I didn’t come way hard into them. I was really right there on the entrance. It felt like racing to me. Moving forward. Moving on.

Like Daniel said on the podium, it’s two races. You had the beginning of that race where you looked awesome. Was it just pure mistakes? How do you lose that much of a pace to let those guys catch back up to you?
Great question. My rear brake went out completely. So, I think I had a decent gap then after. I made big mistake before the whoops because I just jumped into that turn and got on the gas and then I had no rear brake. I almost went in the hay bales [Tuff Blox]. Almost crashed. Then kind of floundered through the whoops. Then it was feeling weird because I thought there was something maybe with my transmission too, but it was just the rotor was bent. So, every time it spun, it would lock up. Then obviously the harder you’re on the gas. But I really got lucky that my bike stayed together. It took a couple laps adjusting to that, for sure. I’m really proud I made due. I feel like I showed a lot of heart to ride the way I did. For a little bit there, I really wasn’t that bad off the pace. Then when you have a guy behind you and you can’t drive into the corner. I’m like, do I go inside, or do I go outside? If I go outside, I’ll probably get passed because I can’t really brake that hard anyway. If I try to go inside, I can’t brake that hard to get to the inside. So it’s just a Catch-22. Made the most of it.

I think you said back in the day, your old team when you were on Husqvarna used to say that you weren't aggressive enough. So, is this all part of the process? We’ve seen you get very aggressive at times, and then this ends up getting you back. So, is this all part of the process of trying to figure out where the balance is?
Yeah. I would say so, for sure. I remember I came by the pit board in the heat race and my pit board said, “Too nice.” Honestly, it was true. I got hit three or four times in the heat, and twice in the main. It’s just the 250 class. We go for it. We are all learning. I was explaining to someone, I was talking to them about aggressive racing. You don’t practice aggressive moves. No one practices hitting someone at the practice track. You just don’t practice that. So, it’s like when you get in the moment and that’s all that’s there, you’re kind of making like a, “Let’s go.” It’s like a heat of the moment thing. To nail it or to just do it right or to be aggressive but not too aggressive, it’s a really hard thing to do, especially without a lot of experience. Definitely still trying to find that balance. It’s tricky.