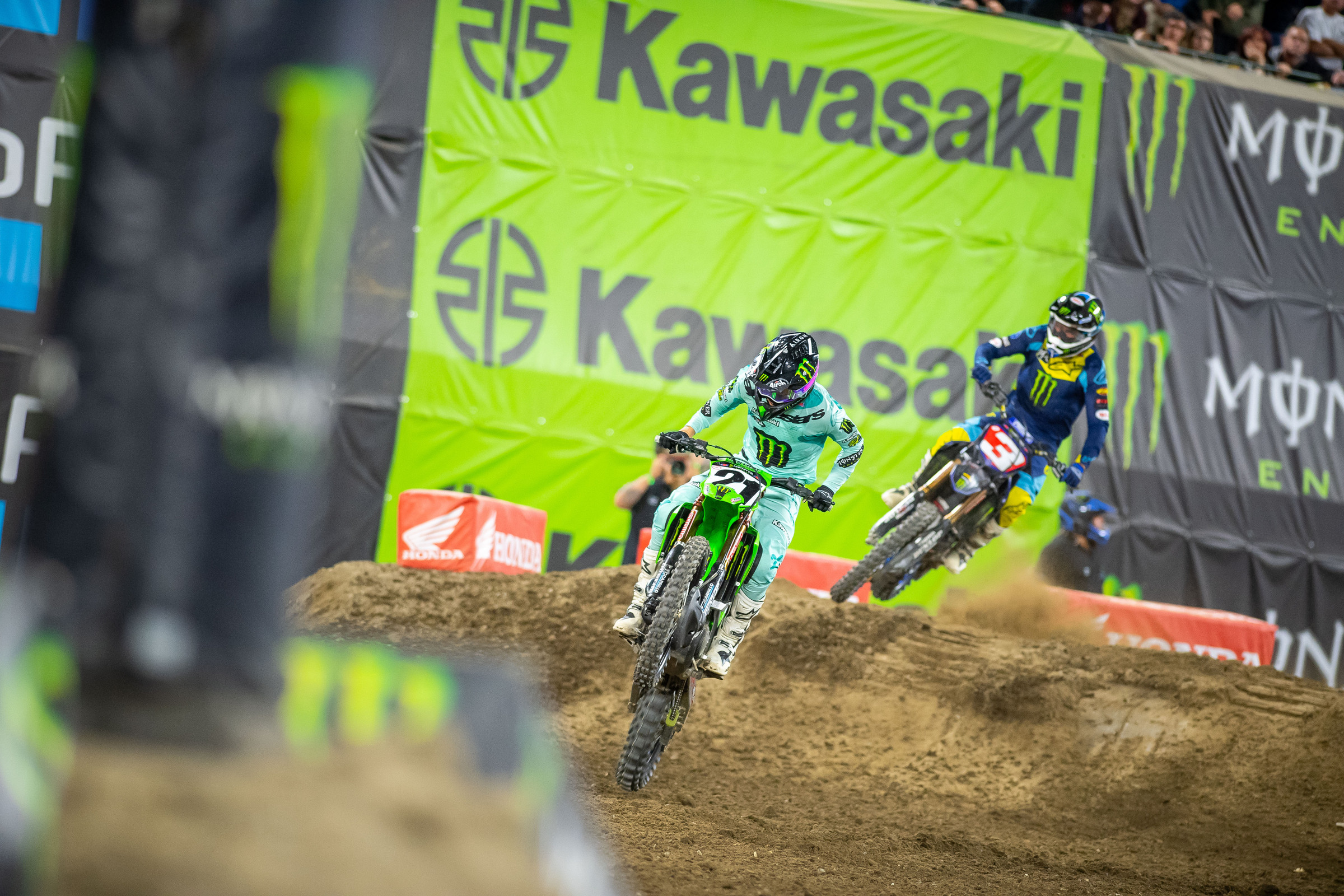 Jason Anderson has been great this year, but before last weekend at A3, it wasn’t clear if he had an answer for the heat radiating form a fired up Eli Tomac. Well, he certainly showed he does indeed have plenty of firepower left when he put a halt to what seemed like the early stages of a monumental run from Tomac. After withstanding early-race pressure from the points leader Anderson motored off for the uncontested win, firmly placing himself right back in the thick of the championship fight. If we’re lucky, we’ll be seeing these two trade blows like this every weekend. –Aaron Hansel

Justin Barcia didn’t win the race last Saturday but getting back on the podium probably felt like a W for the Troy Lee Designs/Red Bull/GasGas rider, who started the year with a pair of thirds, then fell out of the top five at the next three races, scoring ninth, seventh, and sixth, respectively. What was the difference? Probably a combination of things, but the obvious change was that Barcia finally got out of the gate well and didn’t have to slice his way through a bunch of other riders on his way to the front. If he gets another good start in Minneapolis, he’ll be a threat for the podium. -Hansel

The above title traditionally refers to rumors regarding riders switching teams, but Cooper Webb’s season thus far has been so out of character for the champ we thought Silly Season was appropriate. Not only has he not won a race yet, but he’s only been on the podium once, he’s only been in the top five twice, and he’s gotten eighth place in the last three races. For perspective, Webb has already finished off the box more in 2022 (five times) than he did in his entire 2021 campaign (four times). At this point it’s hard to see where Webb is headed, but it’s hard to think he’s not going to get this thing figured out soon. Will Minneapolis mark the turnaround point? ­–Hansel

Getting on the box in 2022 is no small task, but you know Marvin Musquin is going to get there sooner or later. He was pretty quick last Saturday in Anaheim too, where he finished fifth. Had he not gotten together with Cade Clason, there's a good chance he would have been on the podium. He’s going to need some serious juice to get there, but the good news is, other than the fourth place he took at the season opener, A3 was his best finish of the season, and just his second top five. Are things about to start trending the right way for the Red Bull KTM rider? –Hansel

Chase Sexton started the season out very, very fast, but mistakes led to results that didn’t reflect just how fast he was going. Then he won a race and backed it up with two more podiums (third at both A2 and Glendale). But at A3 Sexton just didn’t seem to be clicking like he has before. We don’t have any inside information as to what the issue could have been, but if Sexton has more nights like A3 it’ll be something to take note of. –Hansel

You have to love the start of the 250SX east region. After six rounds of racing have already gone down, it’s like getting back the thrill of January a third of the way into the season! There’s plenty to be excited about this year too, as the competition is going to be fantastic. Guys like Austin Forkner, Cameron McAdoo, Jett Lawrence, Max Vohland, Jeremy Martin, Levi Kitchen, RJ Hampshire, Pierce Brown, Mitchell Oldenburg, the one and only Phil Nicoletti, and more, will all be laying it down when the gate drops on Saturday night. If you’re not excited for it, check your pulse. –Hansel

It seems like every season the black cloud finds a specific team to hover over and this year it’s been spending a significant amount of time dousing the Monster Energy/Pro Circuit Kawasaki truck with unfortunate luck. Jo Shimoda has had a rough go and hasn’t gotten the results he and the team were hoping for, and crashed hard A3, sustaining, by the looks of Shimoda’s Instagram, a serious foot injury. Seth Hammaker also bowed out of the series several races ago with major injuries suffered during the week. The beginning of the 250SX East Region is an opportunity to put all of that, at least for now, in the rear view as the team’s hot shoes, Forkner and McAdoo, as well as their highly anticipated rookie, Jett Reynolds, will try to right the Pro Circuit ship when the gate drops in Minneapolis. -Hansel

It’s tough to say Honda HRC’s Ken Roczen still has a chance at this 450SX title, given the way the lead duo of Anderson and Tomac are riding and that Roczen currently sits eighth in the standings and well over a full race down to Tomac (42 points down!). After winning the opening round, Roczen has yet to return to the podium and only has one top-five finish since. For the first time in his 450SX career, Roczen has three finishes outside the top ten—the most he’s ever had in one 450SX season. And we are only six rounds in. While the championship seems like a far reach at this point, maybe these East Coast races will help the Honda HRC rider find his groove and become a wild card for the top several riders in the championship, including his teammate Sexton. -Mitch Kendra

While it might be freezing tomorrow in Minnesota, the weather inside the U.S. Bank Stadium dome should be perfect for racing conditions. However, that probably will not stop Max Vohland from running hand guards (and personally, I am a-okay with that!). The youngster repped hand guards last year in his rookie season as a pro, despite racing in NGR Stadium and Lucas Oil Stadium domes to start off his first ever AMA Supercross season. Vohland finished 9-8-6 in his first three 250SX main events before his season was cut short at round four following a hip injury. Vohland is someone you might not consider a preseason title favorite but the Red Bull KTM rider could very well be fighting for top fives and podiums with some of the veteran riders in the class after a strong off-season of training and testing the all-new generation KTM. -Kendra

As Hansel mentioned, there are a handful of new riders that will be racing when the 250SX East Region kicks off its season. Included in that list of new riders is none other than Levi Kitchen. Kitchen won the 2021 Nicky Hayden AMA Motocross Horizon Award at the Monster Energy AMA Amateur National Motocross Championship at Loretta Lynn’s Ranch en route to the Open Pro Sport and 250 Pro Sport titles, then had a solid showing in the remaining Lucas Oil AMA Pro Motocross Championship rounds. While this will be his debut AMA Supercross event, you can expect to see some the Washington native having fun and hauling ass. His low-standing technique and incredible speed make him one to keep an eye on at all times. -Kendra