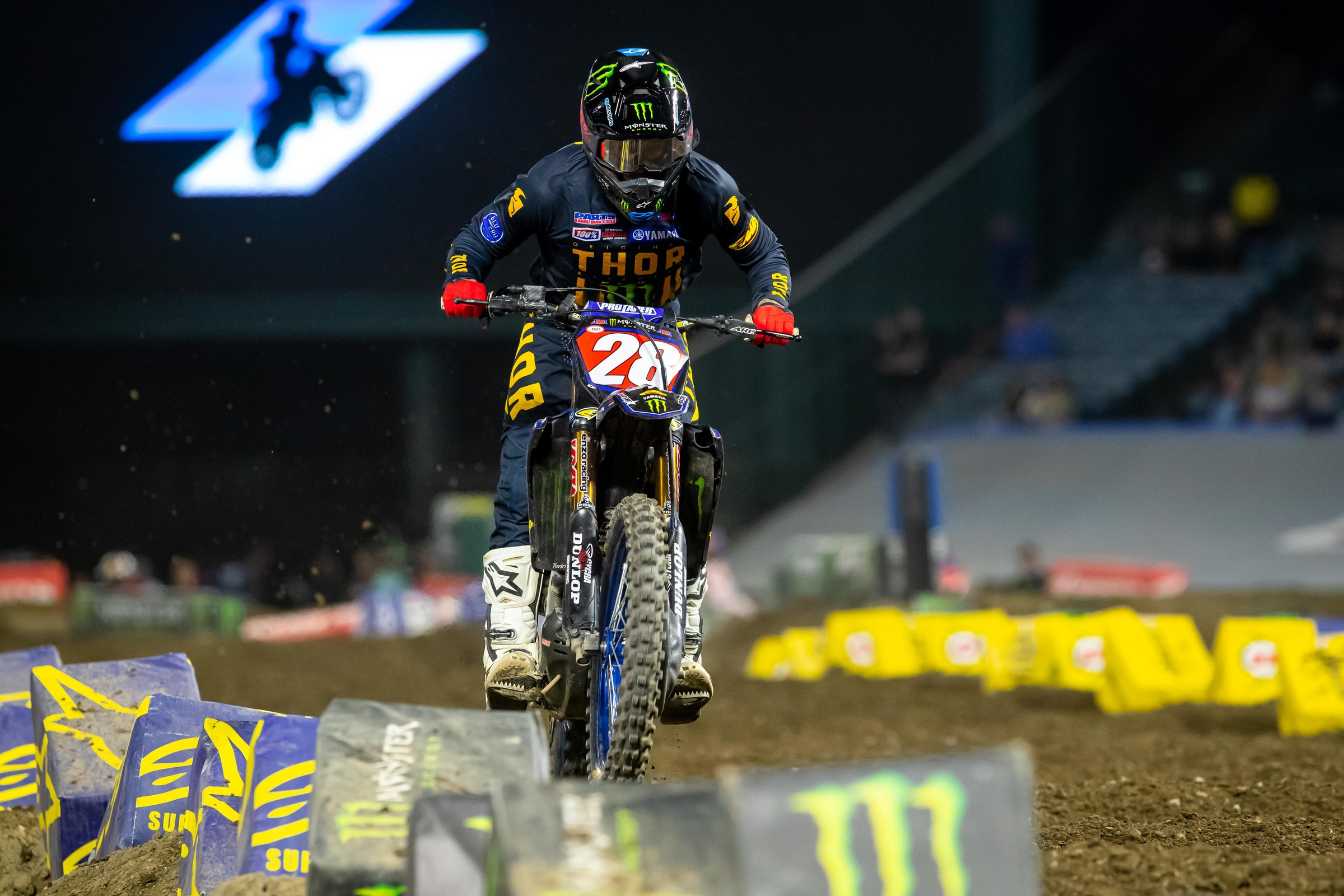 The toughest aspect of the third and final go for Monster Energy AMA Supercross at Angel Stadium in 2022 was the track itself: specifically, the whoops. Now, the whoops have always been a staple obstacle in AMA Supercross, but the whoops in 2022 have gone to another level. They've been big, pointy, and oddly spaced. They've been beaten up, cupped out and hammered. Anaheim 3 was no different. Throughout qualifying, riders in all sessions of both classes were struggling, bouncing left, right, and center in the long whoop section, and barely getting through them if they did stay up.

When the gate dropped on the 250SX main event, Christian Craig put his veteran skillset on full display. Coming through the holeshot stripe third, Craig made a risky move as he charged down the right side of the whoops. The Monster Energy/Star Yamaha Racing rider positioned himself perfectly with a great drive along the Tuff Blox that sent him past Vince Friese (center) and Hunter Lawrence (left) from third to first. As our Kellen Brauer will explain in his Anaheim 3 race examination video below, Lawrence gets a great run on Friese and thinks he will enter the turn with the race lead. He was going to, but little did he know Craig was opposite of him doing the same thing. Craig’s incredible drive from behind catapulted the #28 into the lead directly in front of Lawrence.

Watch as Brauer breaks down the race footage below, starting at the 3:45 mark.

This is a risky move by Craig. Passing in the whoops this year has not been an easy feat. Passing two riders in the whoops ups the risk factor even more—if either Friese or Lawrence go down, Craig could easily get collected in the narrow section with no escape at a high speed (see Jo Shimoda crashing into a downed-Friese in the whoops in this very stadium that about two weeks ago).

If either Friese or Lawrence clip the final whoops and cannot stop, Craig is getting T-boned while entering the turn. But Craig used his skills to blast into the race lead, and away from the carnage. Only one lap later, Jalek Swoll crashed in the whoops while running in fourth, and his crash took down Derek Kelley and Nate Thrasher. Swoll and Thrasher’s nights were done, but Kelley continued on. While running second, Lawrence had a huge crash of his own in the whoops, ending his night early. The other title contender in 250SX West, Michael Mosiman, also went down in the whoops. Jerry Robin also had his night impacted significantly by the whoop section (as did privateer Devin Harriman’s if you followed close attention to the KTM rider’s wild night, too!).

Craig has always been a whoop monster, but this year the whoops are much tougher than any other recent year, so now he's getting to exploit his strength to an even greater degree. Whoops are key in a manner not seen in nearly 20 years. Craig is finding his stride in the right place at the right time.

Thanks largely to his advantage in the whoops—and Lawrence going down trying to match him—the California native will enter the scheduled five-week break in the 250SX West Region with a full-race advantage over Michael Mosiman (28 points back) and Hunter Lawrence (29 points back after he did not finish the race).

Craig even said in the post-race press conference he “checked up” when he saw Lawrence crash in the whoops.

“It’s a bummer that that did happen,” Craig said on his rivals’ crash. “I felt like that was a good battle brewing. He was matching me in the whoops. We were only four laps in, so I felt like he was pushing. He was pushing the envelope. Unfortunately, it bit him. It bit a lot of riders tonight. After I saw him go down, I kind of checked up. I just focused on my laps, no mistakes. Was very cautious with lappers. I feel like it was pretty sketchy out there tonight. It’s a bummer that Hunter did go down, but it’s a good way to go on this little break we have and just keep the momentum going for Seattle.”

On a night where the whoops became the make-or-break part of the race, Christian Craig's greatest asset shined through.