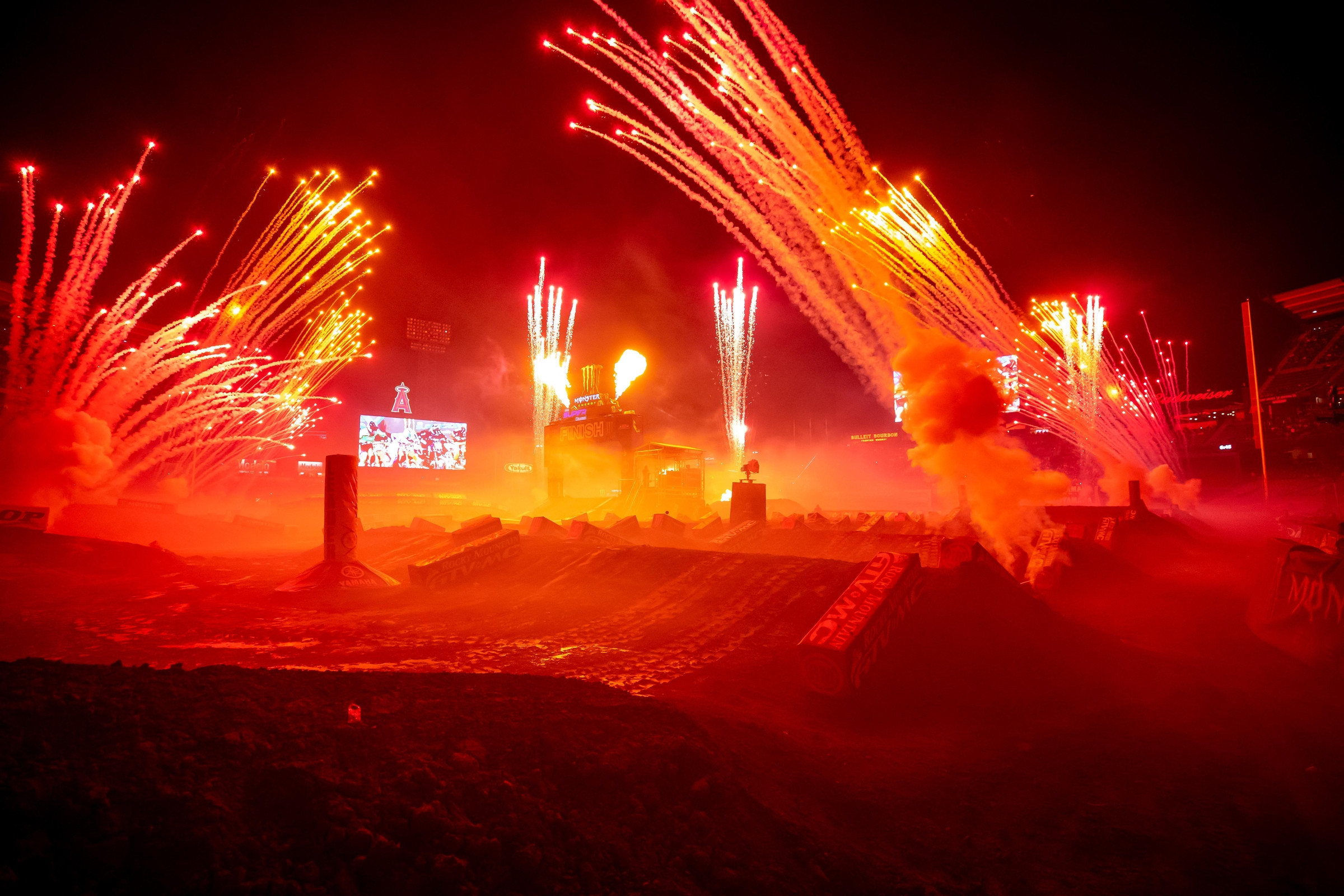 Generally, the third sequel isn’t that good. For every Rocky III, there’s a Hangover 3, or whatever that last Star Wars was. It’s hard to just produce killer content three times I guess, I don’t know. When it comes to Anaheim 3, the Monster Energy AMA Supercross Championship produced a solid second sequel. Not an all-timer by any means, but lots of excitement for sure. That is, if riders hitting land mines in whoops is your type of excitement.

Let’s dive into the whoop controversy. We’ve had something to talk about at every round this year, that’s for sure. This week it was a section of whoops after the finish that had a lot of dudes not named Christian Craig struggling, and later venting. They were big, long, and pretty hardpacked. Some riders spoke of a whoop near the end of the section as being a “curb” and we had a ton of dudes down in them, especially the 250SX class.

We had Justin Starling on the PulpMX Show on Monday night and he said that before the 450SX main, after the carnage of the 250SX main, they scraped the last three whoops to help the guys out but they were still tough. How tough is too tough, though? Our buddy Jason Thomas says riders are responsible for how fast and how they want to tackle any obstacle on a track. If it's gnarly and you don't have the skills to get through and not crash, just go slower. I get that, but to me, you want good racing, right? Well, in the 250SX class that was not good racing. The majority of the riders had issues or crashed in them and so, to me, maybe we need to take a look at them?

I asked Craig about the whoops this weekend. I know he’s like Jesus in them so maybe he’s biased, but I think he’s an older, mature dude that has seen and done a lot in racing. I trust him to give me his honest take. Well, he thought the whoops at A1 after the finish were tougher and he’s surprised there was so much consternation about the whoops. Craig says Glendale's whoops were short and small, Oakland they were small and broke down quickly, A2 was supposed to have two sets but there was only one, and so his point is there’ve been two tough sets in six races. That’s Craig’s opinion. We also had Phil Nicoletti on Monday’s show and he said he’d like to take the guy who builds the whoops and duct tape his wrist  wide-open to a 450 in fourth gear and send him through a set so he can see what it’s like. So, yeah, we don’t quite have a consensus on this stuff.

Let’s break down Anaheim 3 by looking at the three Anaheim’s and picking out some key numbers, yeah? Like Star Wars, we gotta look at this like a trilogy, right?

Points earned by Eli Tomac at the three Anaheims, which is tops in the 450 class. Tomac got on the podium for the fourth race in a row and took a second place finish as it was presented to him. He was pretty good in the whoops all day long, not the outright fastest guy, but the fastest guy who made the least amount of mistakes in them. Now having said that, he did make some mistakes in them because these whoops were gnarly. Maybe that’s the way we can decide if whoops need to be fixed. Have Tomac do 25 runs through them and if he screws up five times, the crew has to mellow them out? Just spit balling here but anyway, Tomac was again very good at Anaheim and holds onto the red plate.

Wins by Jason Anderson this season after his win at A3 if we’re being totally honest here, that’s two more than I thought he’d have. He rode great at A3, his cutback on ET3 when Tomac got him past the mechanic’s area was a thing of beauty. He got caught by Tomac at one point but stretched it back out. He outlasted Eli Tomac—let that sink in everyone! Jason could exit this series tomorrow with an injury and this signing by Kawasaki would still have been a success by any measure. Think about the points he’s lost also with mechanicals and crashes. I know Kawi has Broc Tickle testing and working a lot with Jason off the bike, and he was touted as an injury fill-in if something happened to a rider. With Adam Cianciarulo out one would think Tick would jump in but in talking to people at Kawasaki, that doesn’t appear to be imminent. They like everything that’s been going on with Anderson and Tickle and want to keep it all rolling.

Number of wins by Christian Craig in the trio of Anaheims. I’m not sabermetrics guy but that’s a perfect score! Craig was amazing again at Anaheim and there’s no doubt he’s taken his game to another level. He qualified third fastest at Anaheim 3 out of everyone. Like, everyone in both classes! He was next level at Anaheim in the whoops and didn’t seem to make a mistake anywhere. Props to Hunter Lawrence for keeping it close, but he wasn’t as good in the, wait for it, whoops. Craig’s got a 28-point lead now and can exhale a bit. What a performance at all three Anaheims for CC.

That's the number of questions I have about Ken Roczen right about now. He crushed it at A1, he got crushed at A2, and at A3 he started pretty much last and worked up to 11th. I mean, last to 11th isn’t terrible but when you look at his final qualifying practice, his heat race and then his ride in the main, you’re left with a lot of questions. Ninety-four of them, to be precise. I don’t know what’s up with him, I have a theory that he’s not comfortable on the bike, he’s frustrated with his team and not figuring it out (he did switch to the X-Trig clamps like Chase Sexton this week) and he’s just riding around right now going through the motions. I don’t know man, it’s super weird. If I had to bet right now, I’d say Roczen is on another brand next year. Maybe back to KTM?

The number of points Cooper Webb is back of the lead after six rounds. Amazing, right? Anaheim 1, where he got second, was a long time ago. I had someone close to the situation tell me he thinks it’s 50/50 Webb versus the all-new bike. As in, both need to be better. It’s weird to see Coop right now as just another guy out there. The pro-Aldon Baker people are really soaking this all in right now, by the way.

The lap Marvin Musquin was on at A3 when he hit Cade Clason while lapping him. Musquin then went down in the sand, which ruined his chances at a podium. Marv’s been really good the last couple of races after a disastrous San Diego. I think he would’ve made the box if not for the collision. Afterward, Marv was cool about it and realized that it was a racing incident. He was in a really good mood actually and seems stoked with everything right now. We “think” this is his last year of SX but maybe not?

The number of positions Shane McElrath lost at the three Anaheim races. Shane’s real first year in 450SX hasn’t gotten off to a great start and I’m sure getting passed 29 times in three Anaheims and not passing one person was not in the plans for the #12.

The number of positive passes The Chizzanator, AKA Kyle Chisholm, made in the three Anaheims. I could also put in zero, as in number of times that Chizz got passed. He was, in a word, perfect. Chiz was tied for the lead in the three Anaheims with Justin Barcia in this category. Kyle’s Anaheim 3 race was SO Chiz, it’s not even funny. A crash on the first lap left him dead last and 20 seconds back. But he just kept Chizzing, passing a lot of dudes and by the end of the race was the top privateer.

Number of days Vince Friese went between podiums at a 250SX. Vince got second at A3 and after all the drama between his greasy move on Craig just seven days ago, there he was next to Craig popping bottles on the podium. You can’t make this stuff up, folks. Look, I hated that move from Friese last week and I’m sure he’d want to do it over if he could but life goes on. He’s ridden very well all series long and the move to the 250SX for him (which I heard he initially didn’t want to do) turned out to be a smart one. If he had ridden a bit smarter, this would’ve been his second podium of the year. Props to him and his team on this result. That’s a long time to wait to be on the box again!

Number of riders Garrett Marchbanks passed after going down in the first turn and ending up fourth. Yes, he got some help with crashes and of course, Marchbanks laughs at all whoops so he was fine, but it was still a great ride. He won his heat as well. The team worked with him on his starts and it seems like they got better. Look for him on a 450 at Daytona as well.

Number of the great Tim Ferry, but also, the number of riders who finished the 250SX main event. The whoops took out most of them, but Max Sanford’s bike blew up at the end of the race. He didn’t cross the line and yet he got 16th. Dominique Thury ate crap bad, said he couldn’t feel his legs, rode around the infield for a bit then felt better and finished the race in 15th. An absolutely bonkers 250SX main event.

Giant crashes in the whoops by Devin Harriman in the 250SX LCQ race and he STILL qualified. Amazing feat by the #216 out there! The kid showed a lot of heart, no doubt about it. Then he got a career best in the main event as well with a 13th. Warrior!

Thanks for reading, email me at matthes@racerxonline.com if you want to chat about this or anything else, we’re onto the 250SX East Coast everyone!