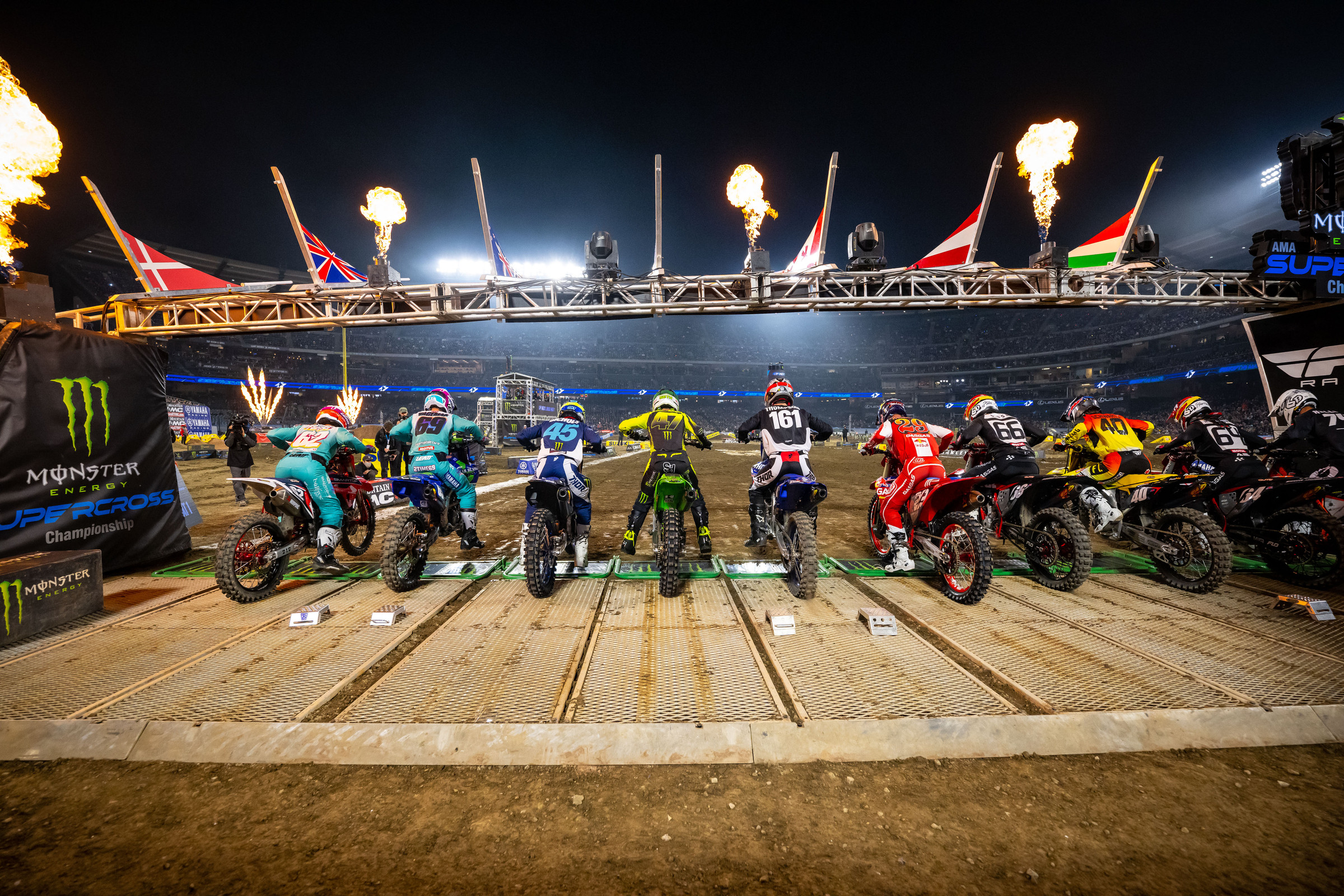 The first round of the 2022 Monster Energy AMA Supercross season has come and gone. Both classes provided several talking points from injuries to crashes, winners to losers. As such, we fired off some questions to 16-year professional racer Jason Thomas to get his take on all things A1.

We've always heard that the round one track is mellow. That wasn't the case this time! What made the track tough?

There were a couple of factors that made this year’s track more treacherous. Often times, A1’s layout has been one of the easiest of the season. It felt like a bit of a “warm-up” for what the season would bring. I believe it was also an attempt to keep riders safe at the opening round. That approach seemed to be off the menu for 2022. The A1 layout was tight and technical. There were big rhythm options and brutally tough whoops. The penalty for mistakes in the whoops could be severe as we saw with Colt Nichols, Chase Sexton, Adam Cianciarulo (practice), Aaron Plessinger (practice), and others. While the downsides of this are obvious (injuries), I am a fan of tracks that challenge the riders. Attempting to tame the tracks only leads to follow-the-leader racing and starts that dictate the results.

The other big factor here was the softer dirt. Ruts wreaked havoc on riders throughout the night, especially during the main events. While ruts are nothing new to Monster Energy Supercross, we don’t often see them en masse at Anaheim.

The combination of a technical track, tight layout, and ruttier-than-normal conditions led to a very difficult night for many riders. I am all for this, though. These are the best supercross riders on earth. Give them a challenge and let’s see who comes out on top.

Malcolm Stewart took out Jason Anderson in the heat, Marvin Musquin took out Stewart (and himself) in the main, and Justin Barcia knocked Anderson down in the main. There were several other incidents beyond that. What was going on?

That’s showbiz, baby! I always wanted to say that so now that we checked that box, we can get down to ahem, business. I think some of this was due to Anaheim hype but some of it was likely an unstoppable force making contact with a seemingly immovable object. When you have a rider like Jason Anderson looking to start trouble with a rider like Justin Barcia, they usually find it. As an overall approach, I typically frown on riders poking the Barcia Bear. It never seems to go well.

Check out this sequence from our guys at Align Media!

I found the moves by Musquin to be the most intriguing, though. He absolutely cleaned out Cade Clason in the heat race’s final corner and then welcomed Malcolm Stewart to the Austrian fold later in the main event. There is some great footage floating around of those two attempting to sort out their differences after the main event. Marvin moved away from Aldon Baker for 2022 and will be under the tutelage of David Vuillemin. Maybe DV told him to unleash the kraken?

Sixth and 16th for Tomac and Ferrandis. At one point Eli was right behind Webb but Webb rode away from him. Are you worried for the Blu Cru boys?

Nah, not really. Tomac always struggles in January. While it might not be fair to assume he will struggle at Oakland, history tells the tale. His results significantly improve as we move away from January. If he is still sixth in March, then we have a serious problem.

As for Ferrandis, this is also similar to last year’s dynamic. Fast? Check. Bad starts? Check. Crashes? Check. Until he can find consistency in supercross, he is going to still have a roller coaster type season. He will be on the podium at more than a few races this year. I believe that. I also believe that he will have several nights like Anaheim where things just go completely off the proverbial rails.

Colt Nichols is already out. Is this served up for Christian Craig on a silver platter or are challenges coming?

I think it is, yes. That sounds incredibly unfair to riders like Hunter Lawrence, Jo Shimoda, Michael Mosiman, Seth Hammaker, etc. I still believe it to be true. I don’t expect Craig to sweep the series, but his starting prowess coupled with his ability to blitz by anyone and everyone in the whoops make him a very tough situation to account for. I could see him winning this series before we even reach the finale, to be honest. He’s paid his dues in this class. This is the year he gets his first title.

You've dealt with the AC injury that Adam Cianciarulo is dealing with. What is that like?

It’s not very much fun! Adam suffered a grade 3 separation of his AC joint. From my experience and understanding, AC separations are broken down into 6 grades. Grades 1-3 are not mandatory for surgical repair while grades 4-6 typically require surgery. That grade 3 diagnosis is where things get tricky because not everyone’s experience will be the same. My grade 3 injury took place in 2002 and I haven’t ever had it repaired. At the time, it was brutally painful to race with, though, and very weak. I couldn’t attack the track; it was more of a “be smooth and avoid any sudden movements” approach. The less of the unexpected, the better. It did improve quickly, though, and so did my ability to compete at 100 percent of my potential.

Adam is suffering through that right now. I believe his crashes in practice were due to that weakness and his inability to hold the pace in the main event due to overall shoulder fatigue. He had to back it way down and just accept a decent result. Trying to hold a top five would have certainly led to another huge crash. His shoulder simply isn’t ready for that yet. It will be soon, though. Watch for marked improvement in rounds 2-3-4-5.

Chase Sexton coulda' shoulda' won. Is this a sign he has a lot to learn, or a sign he's about to take over?

I think it’s a mix of both. His talent and ability have him poised to become a championship contender. His impatience and lack of 450 experience are pushing back against those chances, though. Will he figure it out? I believe he will, yes. Will he figure it out in 2022? I am not so sure. To best the likes of Roczen, Webb, Tomac, and whoever you think is in this upcoming title fight, it’s going to take the full package. Those three are solid on their “off nights” and will have wins along the way to bolster their chances. The pressure they apply with their relentless consistency causes nightmares for anyone with a bit more volatility in their resume.

The other side of this coin that should be mentioned is that even though Sexton tossed away a sure podium, he was still able to rebound for a fifth. If he can turn his “bad nights” into top fives and win on his good nights, he could be on his way to championship relevance. Only he can decide which direction this is going to go.