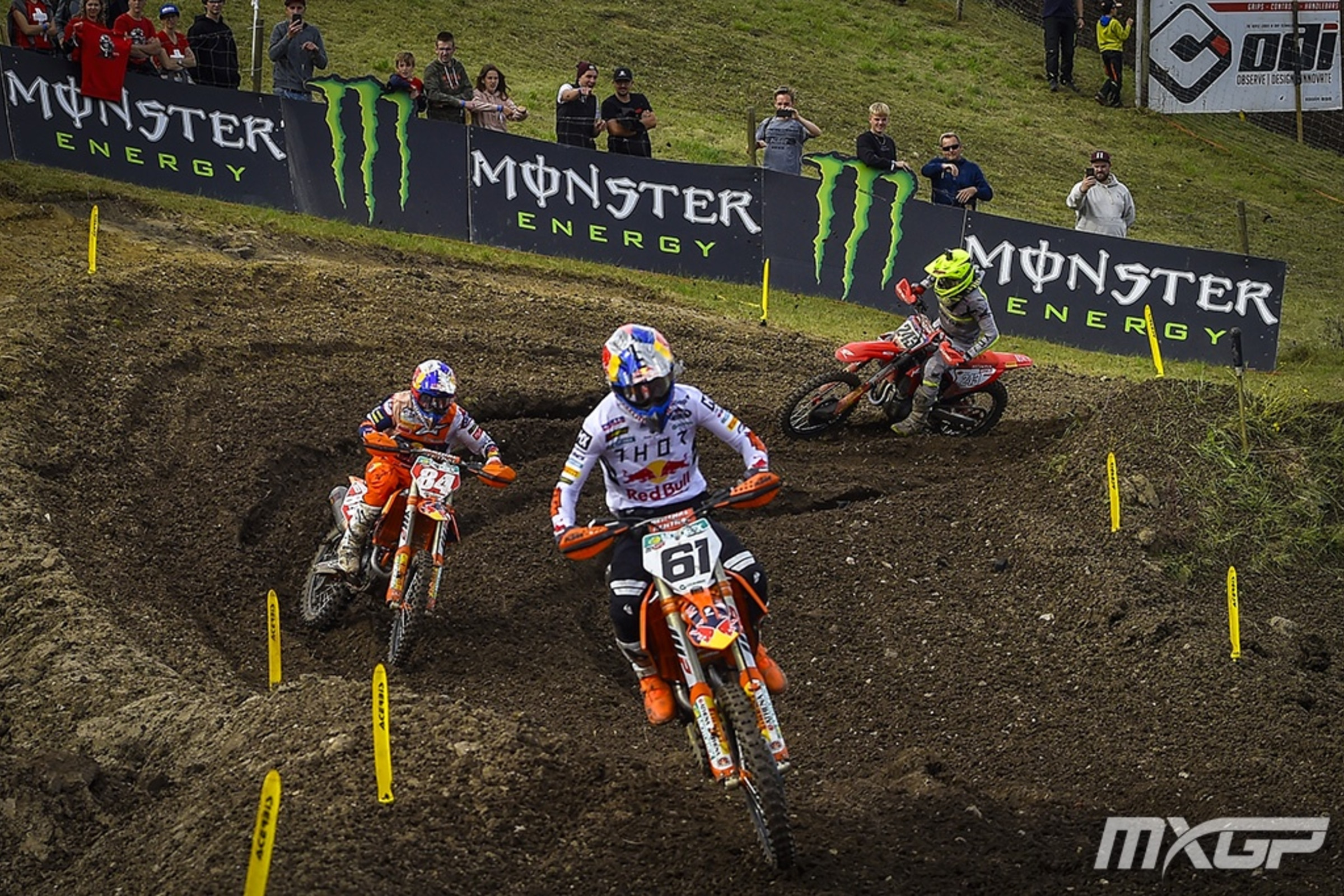 Everything in Tim Gajser’s world was righted for round 11 of 18 in Germany. Two weeks previously the HRC man was struggling in Sardinia in the wake of collarbone surgery. Based on the evidence of his speed and strength around the Talkessel hard-pack for a second successive victory at the venue (he ruled the last time MXGP came to the circuit in 2019), Gajser skipping the Monster Energy FIM Motocross of Nations in Italy was a good call. He celebrated his fourth win of the year (the joint-highest total of any rider in 2021), his seventh podium and re-took the red plate from Germany runner-up Jeffrey Herlings by just two points.

The Slovenian was back to something near his ominous best. Gajser fashioned a 3-1 with an impressive second moto defeat of Monster Energy Kawasaki’s Romain Febvre to reassert his position in what is still a five-rider slugfest for the 2021 title.

“Just three weeks ago I had a broken collarbone and two races on we are back on the top,” he said. “I had two weeks to recover, ride a bit and get back in shape. I really want to thank all the physios and all the team…we have been worked a lot.”

While Herlings was able to fully profit from Gajser’s weakened state in Sardinia to go 1-1, and kept his momentum going with another 1-1 for Team Netherlands at the Nations, it was his turn to again be hit by the swinging pendulum of fortune at Teutschenthal. Actually, the force arrived courtesy of his Red Bull KTM teammate Jorge Prado. A thrilling chase between the pair was decided by just a tenth of a second at the finish line in the first moto with Prado narrowly hanging on for his third checkered flag of the season after holeshotting. Inexplicably the youngster veered across the take-off to the long finish-line jump and collected Herlings mid-air. The duo tumbled in a mix of limbs and machinery. Herlings was already landed on by Ivo Monticelli this season, which fractured his left shoulder blade This time he immediately walked away from the melee, keen not to be landed on a third time. The Dutchman was clearly shaken by the incident and complained of a sore knee in the second moto that explained his conservative run to third place. Prado, identified by many as the villain of the piece but who still hasn’t given his version of events, was stretchered away and taken to the hospital in the nearby city of Halle to receive stitches for a cut on his chest.

“What can I say? As good as it starts as bad as it ends,” Herlings offered. “I made some mistakes in the first 15 mins of the first moto but was then able to catch Jorge. We know he is not the easiest rider to pass; he defends his line and there is nothing wrong with that but jumping? Hmmm, I’m not sure it is the best thing to do.”

Prado’s critics will point to previous close-calls with teammates like Herlings at Assen in 2016, Pauls Jonass in 2018 and Tony Cairoli in recent MXGP outings but the Spaniard was also quite brilliant in that first moto in Germany and thrived on the technicality of the rutty terrain. If his line-change was a moment of misjudgement then the 20-year-old paid quite heavily for it: his DNS meant he dropped to fouth in the championship table and needs 31 points to get close to Gajser.

Add it all together, and it was another sensational moment of a sterling and competitive MXGP campaign to-date. Each one of the five principal candidates for the crown have all had their injuries or illness issues but luckily are still in the game. Neutral fans and observers of the sport will be hoping the durability lasts as the championship hurries into a spell of seven rounds in five weeks.

-Talkessel has long split opinion between the riders. The Teutschenthal venue has been heavily modified since its days as a speed bowl and has been converted into a litany of jumps and obstacles over the years to try and contain the pace for the modern-age four-stroke. In recent editions of the Grand Prix the hard-pack has been heavily ripped and watered, effectively leading to ‘slot-car’ racing through long deep ruts. The hard base and bumps give the narrow layout added technical emphasis but does not encourage particularly close action or overtaking. Opportunities for pursuing riders mainly come through mistakes of others. “One of the worst [tracks] we’ve had and not well prepared,” Tony Cairoli opined. “They could have worked it better.”

But then there is something gloriously old-school about Talkessel that satisfies the brigade that dismiss the modern new-builds of MXGP. It first ran a Grand Prix in the mid-1970s and there are elements of the wider facility that have seem reluctant to move along with the times. The track is naturally set, and the shallow sunken topography means it contains an atmosphere, although it has been a few years since the locals had the likes of a Max Nagl or a Ken Roczen to cheer. At the very least the demands of the ruts provides yet another way in which MXGP mixes things up.

-In the same way that Gajser was able to benefit from the brief hiatus provided by the MXoN, two other riders were struggling in the aftermath of Mantova. Tony Cairoli was seventh overall in Germany and openly confessed that the exertions and rib pain of leading his country to victory counted against him in the second moto where he could only hold on to 10th place.

“I survived the weekend [at Mantova] and we won,” he said. “It was something I was missing in my career and I wanted to do it but I didn’t think too much about the reaction and the consequences and I was feeling really bad here. I was struggling with my health and I knew it would be a tough day from timed practice.”

Cairoli is fifth in MXGP and hovering in loose contention for his tenth title in what will be his last attempt. He faces a 62-point deficit to Gasjer. Also gritting his teeth was Team GBR’s Shaun Simpson, still dealing with a torn ligament in his left thumb. The privateer could only grab five points from both motos.

- Standing Construct GasGas Factory Racing’s Pauls Jonass, another rider who missed the Nations, was a solid fourth overall and banked four more points in his chase of Monster Energy Yamaha’s Jeremy Seewer for sixth in the championship. The Swiss ranked fifth at Teutschenthal as he slowly begins to recover fitness after his battle with Epstein-Barr.

-MXoN MXGP class winner Ben Watson was eighth overall and has been left somewhat in limbo by the Monster Energy Yamaha squad. Yamaha Motor Europe have not renewed the second term in the 24-year-old's deal for 2022 and now the Brit is wanted by at least two other teams. Yamaha were initially rumored to be dithering on an opportunity to sniff around Jorge Prado who is under contract for at least another two years with the KTM group. Now it appears MX2 championship leader Maxime Renaux could be pushed up to the 450 class at the age of 21 to form the last part of a three-man line-up, with Jeremy Seewer and Glenn Coldenhoff already fixed. Either way it seems that rookie Watson is harshly paying the price for the general underachievement of an expensively assembled effort that only has two podium finishes in 2021.

-Renaux was the surprise winner of the MX2 Grand Prix. Red Bull KTM’s Tom Vialle continued his scurry up the championship standings since fully recovering from a broken right hand and notched his third 1-1 of the season. Then he was judged to have jumped on yellow flags in the second moto and was penalized two positions. His subsequent 1-3 equaled Renaux’s 3-1 and the Yamaha man had his third win of the season (and ninth podium) confirmed while driving home Sunday evening.

“I don’t know what to say about the yellow flag decision except that I didn’t see them and watching the video back you needed to be lucky to see them,” Vialle said after being denied his fourth consecutive triumph.

Nevertheless, the defending world champion has risen from 11th to 4th in the standings and has his sights on a top three slot before the end of the campaign. Renaux was grateful for the extra points that helped extend his advantage over teammate Jago Geerts that now stands at a sizeable 85. Vialle’s KTM teammate, Mattia Guadagnini, also seemed to carry a Nations hangover and an off-day for the MX2 rookie resulted in 11th overall.

-Red Bull KTM missed the win for the first time in the last three rounds in either category but one of their three podium results was particularly memorable as Rene Hofer – winner of the MX2 class at the Nations the previous weekend – went 2-4 for his very first trophy in the class. The 19-year-old only made four GP appearances in 2020 for the factory team as a broken shoulder ended the condensed COVID-19 formed calendar abruptly. In Germany he finally stitched together two effective motos to uncork champagne and ensure that KTM are only the second team this year to have had all their racers up on the rostrum (the other is the Rockstar Energy Husqvarna MX2 team).

-The fight for speed between Renaux and Vialle could take on a spicier dimension this coming weekend as MXGP moves to France. Like Germany, the French Grand Prix marks a return to a popular terrain for the series and after missing the schedule in 2020. Interestingly the race will be staged by the circuit at LaCapelle Marival, located in the centre of the country and normally home to a popular pre-season International meeting. For some riders the track will be a discovery; “I’ve never raced there!” commented Cairoli, with his 18 years of world championship experience.