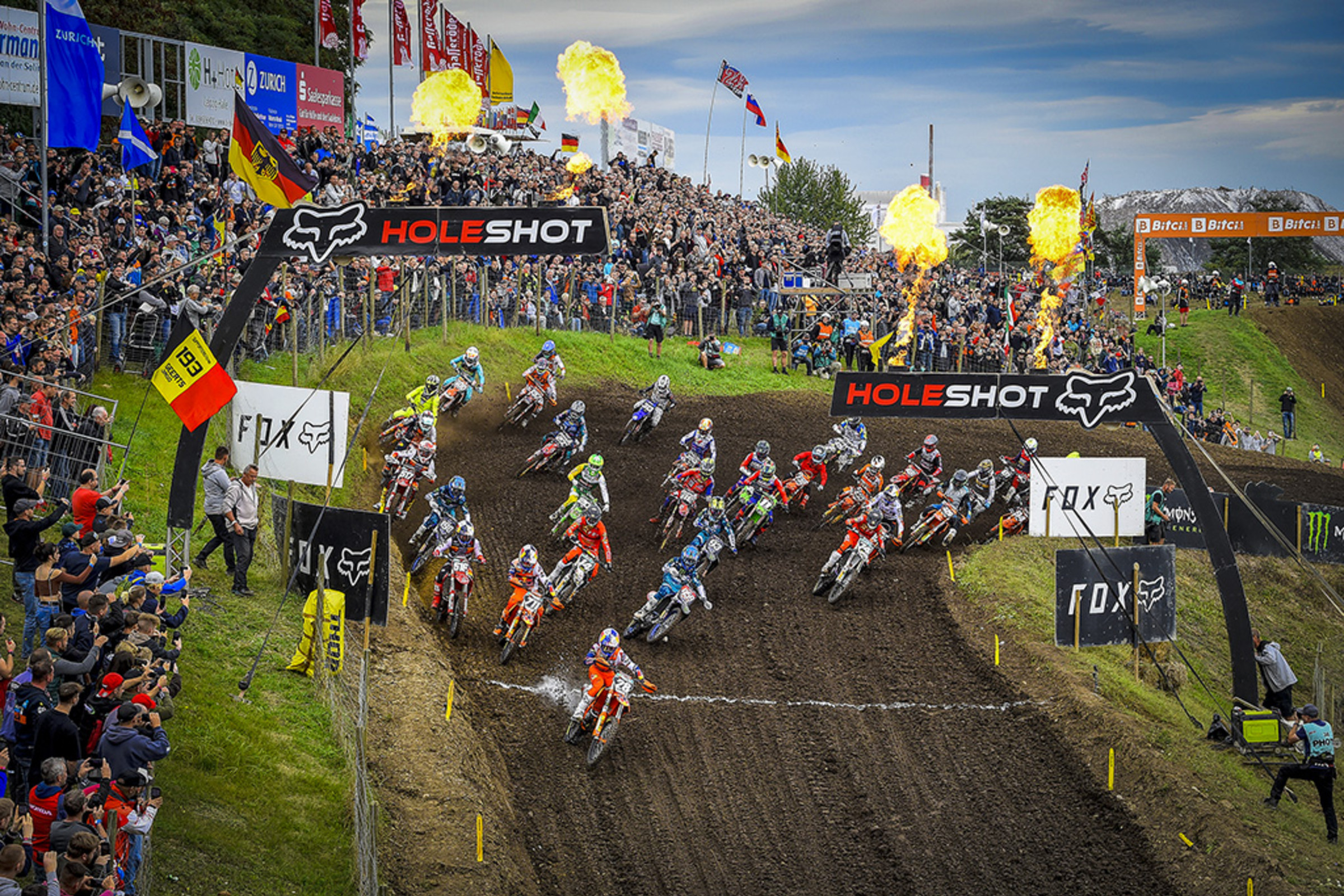 Insight MXGP Keeps Getting Closer, or Too Close

It doesn't seem possible that the FIM FIM Motocross World Championship could get crazier than it already has been, but yet here we are, with the German round providing controversial finishes in both classes. Plus Tim Gajser has now reclaimed the MXGP points lead despite breaking his collarbone just a few weeks ago.

Here's InFront Moto Racing's post-race PR on the weekend, and we'll have analysis from our Adam Wheeler today as well.

TEUTSCHENTHAL (Germany) – Round 11 of the FIM Motocross World Championship in Teutschenthal, Germany, delivered one of the most intense Grand Prix’s to date as the championship chase came to blows.

Team HRC’s Tim Gajser took back the series lead in MXGP as he made his return to the top step of the podium following a shoulder injury, while Monster Energy Yamaha Factory Racing’s Maxime Renaux finished the weekend with an overall victory to extend his title lead, as Red Bull KTM Factory Racing’s Tom Vialle was handed a two-place penalty in race two.

The MXGP of Germany had it all. Incredible racing and very close battles, topped off with the epic support of the large crowd of fans that lined all areas of the old-school circuit, which made for an amazing atmosphere.

In MXGP, the action was unbelievable, and it only confirmed how strong and unpredictable the MXGP class is this season, with the top five championship contenders having close battles in both races.

In race one, it was a Red Bull KTM Factory Racing top three out of the gate as Jorge Prado took the Fox Holeshot from Jeffrey Herlings, Antonio Cairoli and Gajser. Standing Construct GasGas Factory Racing’s Pauls Jonass and Brian Bogers also started well with the pair sixth and seventh.

Herlings then took away the lead from Prado, as Monster Energy Kawasaki Racing Team’s Romain Febvregot himself into third behind the pair and started to look for a way to pass Prado for second.

Gajser then caught onto the back of Cairoli as he searched for a way around the Italian, eventually making a pass stick a couple of laps later. Though while this was going on, we saw Prado make a move on Herlings to take over first position.

Febvre then edged closer to Herlings as he searched for an opportunity to make a pass, but after several attempts could not get the job done and was caught out by a hard-charging Gajser who took away third. The Slovenian then went after Herlings who was urged onto the back of Prado and that’s when we saw the intense battle for the win.

There was virtually nothing in it as Prado and Herlings crossed the line, with Prado securing the race win but colliding with his teammate mid-air, which took both down. Herlings was able to walk away from the incident, while Prado had to take a trip to the hospital to receive stitches under his armpit. He did not line-up for race two.

In race two, it was Febvre who clinched the second Fox Holeshot with Seewer, Jonass, Coldenhoff and Gajser just behind. Though a couple of corners later and after some very smart moves, Gajser was up in second.

Herlings started the second race further down the order, though was quick to get Jonass for fourth. Meanwhile Cairoli was even further down as he battled his way up from 14th. The Italian eventually finished the race in 10th.

Febvre continued to lead Gajser, Coldenhoff and Herlings, as the Bullet pushed hard to get around his fellow countryman. It took Herlings seven laps to pass Coldenhoff and after that it seemed like he was happy to settle for solid points than to push forward to get Gajser and Febvre.

Eventually Gajser caught onto the rear wheel of Febvre’s factory Kawasaki, and it took several attempts and block passes for the Slovenian to secure the lead on lap 12. He then got his head down to finish the race 12 seconds ahead of Febvre, with Herlings crossing the line third.

With a 3-1 result, Gajser made his comeback to the top step of the podium, with Herlings second and Febvre securing his fifth podium of the season. And in terms of the MXGP World Championship, the standings could not be any closer, as Gajser has take the red plate back and leads Herlings by just two points, while Febvre is third a further six points behind.

Hofer then led Vialle, Simon Längenfelder of DIGA Procross GasGas Factory Racing, Renaux and Monster Energy Yamaha Factory Racing’s Thibault Benistantwho started well too. But then the Frenchman went down and was way down the order.

Rockstar Energy Husqvarna Factory Racing’s Jed Beaton started well in sixth, while Renaux started to apply the pressure onto Längenfelder for third. Though the GasGas rider was not going to back down easy as he was being urged on by his home fans.

Red Bull KTM Factory Racing’s Mattia Guadagnini was having a tough start to the race as he made his way from 18th to 14th. Eventually he was able to get back to 13th place.

By lap four Renaux was finally up in third, while Hofer and Vialle continued their close battle. The two KTM riders kept things very close and were within less than a second of one another for 11 laps, until finally Vialle was able to find a way through and make the pass stick.

While the two leaders fought for the win, Monster Energy Yamaha Factory Racing’s Jago Geertsand Beaton were able to get around Längenfelder who dropped down to sixth position. The pair then caught onto the back of Renaux and at that point Beaton was faster than both of the factory Yamaha riders.

Vialle then got his head down and finished the race with a win, as Hofer held on to second, while Renaux crossed the line third.

In race two, it was once again Vialle with the Fox Holeshot, this time ahead of Renaux, Benistant, Geerts and Rockstar Energy Husqvarna Factory Racing’s Kay De Wolf. Beaton was right there as well, as he quickly took fifth from his teammate as Hofer followed behind.

Once again, Guadagnini started the race way down the order and eventually made his way back up to 10th to score some important championship points.

We then saw another battle of the teammates as F&H Kawasaki Racing’s Roan Van De Moosdijk dived down the inside of his teammate Mikkel Haarup to take 11th place and then moments later made a mistake which took Haarup down. Fortunately, the Dane lost only one position to Guadagnini.

Vialle continued to Renaux by 3.718 seconds, while Hofer struggled to get around De Wolf. The two leaders pretty much checked out, as Geerts sat in a distant third, with Beaton looking to keep close.

At one point it looked like Renaux would go for the win but after failing to find a good opportunity to pass, he settled for second which meant that Vialle was the race winner, Renaux was second and Geerts third.

While Vialle crossed the line first, he was penalised two positions for not respecting waved yellow flags which as a result put him third in the race and moved Renaux and Geerts up a position. Due to the penalty, Renaux was declared the overall winner, with Vialle finishing second and Hofer celebrating his first MX2 podium with third overall.

As it stands, Renaux now leads the MX2 World Championship by 85 points over Geerts as Guadagnini drops to third in the championship.