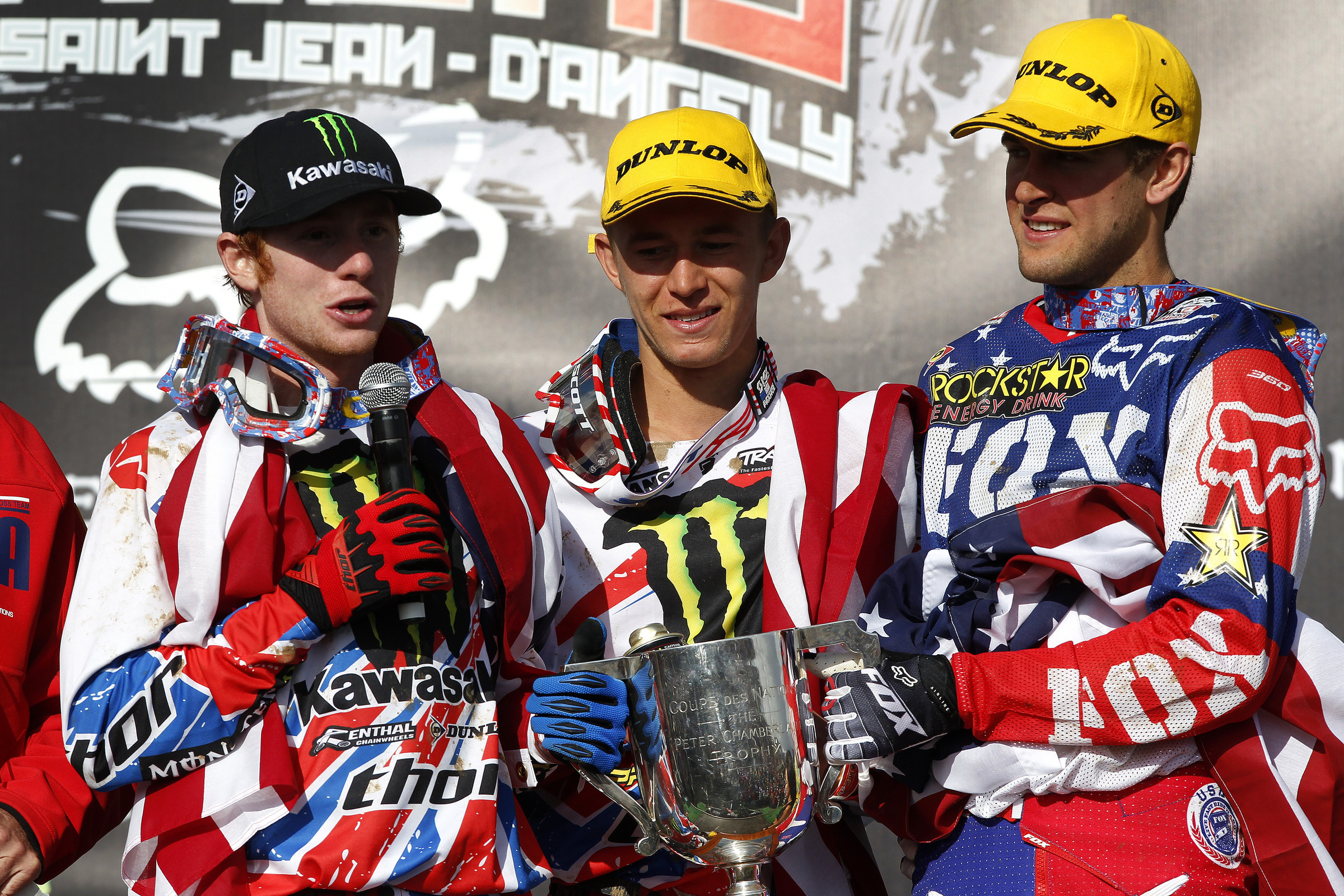 Just a fair warning, reading this article will make you sad. It will make you pine for a day when the Monster Energy FIM Motocross of Nations brought out the best of the best, such as this pack of riders competing in the 2011 event, held in France: Ryan Villopoto, Ryan Dungey, Jeffrey Herlings, Tony Cairoli, Ken Roczen, Chad Reed, Marvin Musquin, Dean Wilson, Blake Baggett, Tyla Rattray, Christophe Pourcel, Brett Metcalfe, Gareth Swanepoel, and many more GP regulars. It was a true melting pot of talent from around the world, and a collision of eras when you consider it’s probably the only time the likes of Herlings and Villopoto raced head-to-head. They literally did, as the second moto of the day featured Herlings, who jumped up to a big bike for The Netherlands for this race, trying to hold off Villopoto, who took Team USA’s outside gate and had to come through the pack. On the last lap of moto two, French MXoN legend Gautier Paulin flashed across the line with the moto win, with Herlings and Villopoto right behind.

The previous moto was won by Reed, who was surely spending big bucks out of his own pocket to bring his TwoTwo Motorsports team over to France. Reed and Australia were determined to get a podium, which they did on this day.

The big story was Team USA trying to keep a win streak alive against a talented French team on French soil. France had Paulin, Pourcel, and Musquin on board, certainly a capable trio. However, it’s key to understand that in these days, Team USA won all the time (win streak dated back to 2005 at this point) and it seemed like clutch rides for the Yanks, and bad luck for others, defined the event.

That was the case this time. France led the scores heading into the final moto, as Team USA’s 250 rider, Baggett, had a bad day on his Monster Energy/Pro Circuit Kawasaki, going 17-17 in his motos (he won the MX2 qualifier race on Saturday, but his motos on race day were marred by crashes, including a first-turn pileup in moto one that pretty much ended Cairoli’s day). Baggett’s scores didn’t help, but Team USA had two big guns loaded for moto three, with both Villopoto and Dungey headed to the gate. That’s a heck of a duo.

How clutch was Team USA, and the Ryans, in these days? The MXoN is designed for one rider on each team to have a good gate pick, and one to have a bad one. Yet off the start of moto three, somehow both Villopoto and Dungey found themselves up front off the start.

“I think I started outside, I just got a better start that time, and Dungey was in front of me, and I ended up catching up,” said Villopoto in the most recent episode of the Leatt Re-Raceables Podcast. “He had let me by, basically. There was no sense in holding me up, as a team. I was able to pull away. That track was gnarly, though. The rock sheets in the dirt were like nothing I had ever seen.”

So that’s the clutch gene that Team USA used to have—when they needed something special, they usually got it. Next comes the bad luck for the other teams. In this case it was for France. Pourcel, no stranger to racing Villopoto and Dungey back in their 250 days, was ready to put the team on his back and win it for the home folks. He passed Dungey and went after Villopoto for the lead…until he suffered a rear wheel problem, with the mousse tube coming out of his tire. It was a bizarre mechanical, and it cost France any shot for the win.

Stuff like that used to happen to France all the time. Then it flipped and they could do no wrong. Now the bad luck has gone back in France’s direction, with a rear wheel failure costing Tom Vialle over the weekend in Mantova.

Clutch riding and good luck. That was Team USA’s calling during that 2005-2011 streak. They trailed going into the final moto. I asked Villopoto if he and Dungey put their heads together to get fired up, or if someone gave them a pep talk to get it down in the final moto.

As Villopoto sees it, there was no need. He and Dungey had been there before and knew what they needed to do.

“The good thing there is, if you have a question mark on the team, it’s like Blake being the new guy on the team,” he said. “Sure, Dungey could have had a bad moto and so could I. But that was Blake’s first time, and I remember my first time. It’s gnarly. With Dunge, I didn’t have to worry about him and I don’t think he had to worry about me. Any one of us could have made a mistake, but if I’m picking a dodge ball partner for my team, he’s [Ryan Dungey] the one.”

After Pourcel’s wheel cost France a chance, the Ryans went on to run first and second in the final moto.

“At some point during the weekend, we were having a conversation with Roger [De Coster, team manager] about a race in the 1980s, where they [Team USA] had pulled away and crossed the finish line together. So that was cool. I waited for Dunge at the end so we could cross the line together.”

It has now been ten years since the Americans have won this race.

Listen to the full Re-Raceables Podcast on the 2011 MXoN below.