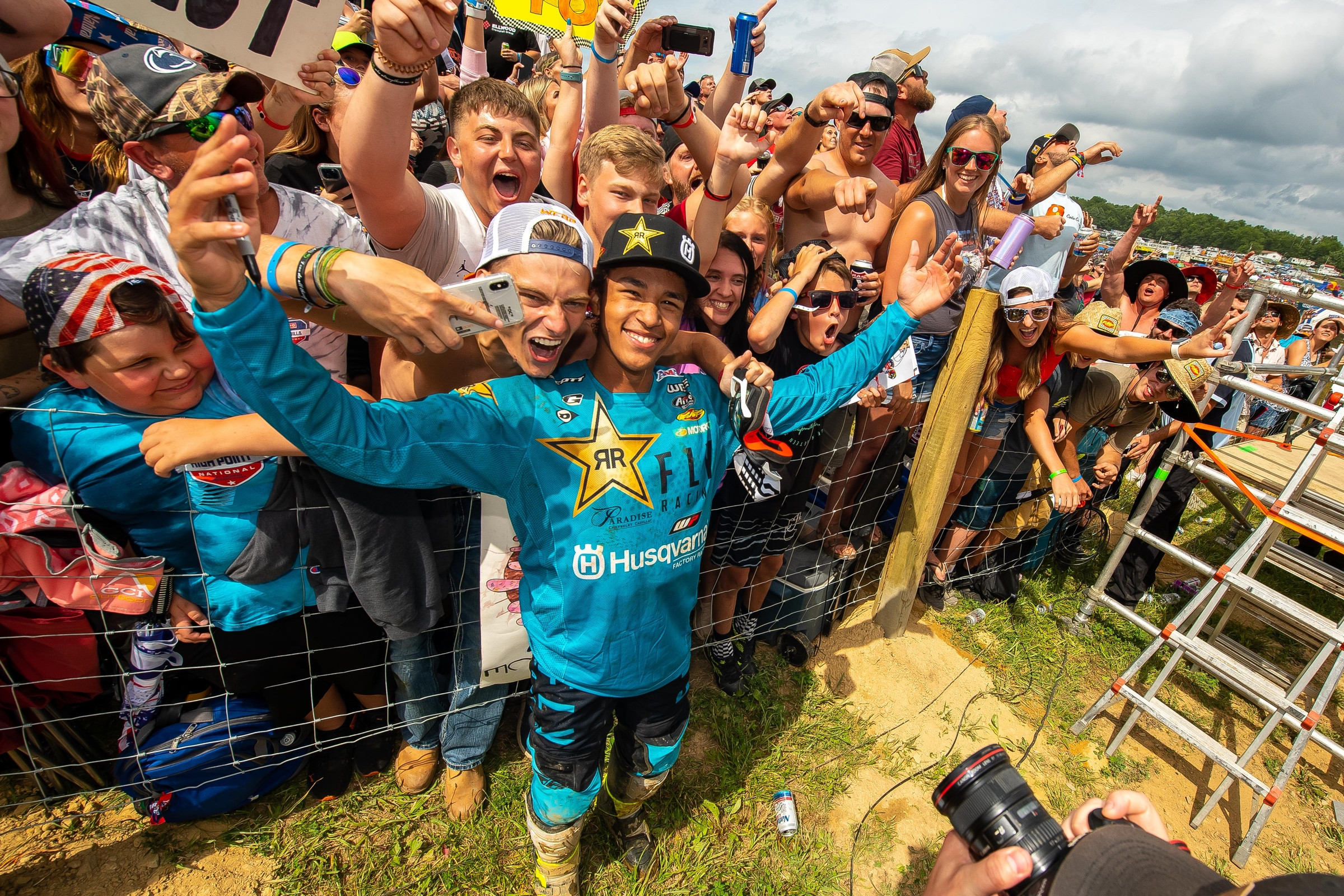 The 24-moto run for the Lucas Oil AMA Pro Motocross Championship will be complete by Saturday night, and many riders have already called it quits on the 2021 season due to injury, illness, or fatigue. Focus on next season, the silly season, and the Monster Energy AMA Supercross season will soon come into, well, focus.

Let’s not forget an epic summer so soon. Here are the highlights.

The Depth: It didn’t last to the end so we have to celebrate the memories before they’re gone: the 450 class this year started 10 deep with established, proven winners. At the opener, last year’s front runners such as Zach Osborne, Adam Cianciarulo, Eli Tomac, Justin Barcia, Marvin Musquin and Chase Sexton were there, plus Ken Roczen, Cooper Webb, and Aaron Plessinger were there after missing just about all of motocross last year, and Dylan Ferrandis joined the class after winning last year’s 250 title. That’s 10 big names right there, and you could go for a dozen if you look to riders like Jason Anderson. While many didn’t survive the whole season, the brief glimpses of this pack together led to fantastic racing on the track and bench racing off of it in the early weeks.

The Battler: While Dylan Ferrandis was clearly the best rider overall, he had to fight, scratch, and claw for whatever success he had, often late in the motos. Starts and sprint speed? Nah. Ferrandis let the first few laps play out, and then he just ground the comp down to the ground. That’s an entertaining way to do it. Instead of getting a holeshot and checking out, Ferrandis turned many motos into nail biters as he clawed through the pack. This might be the best and closest fights we’ve ever seen from a rider capable of wrapping up the title early. You simply have to respect that kind of hustle and grit.

The Battles: If there’s one thing that will stick with this season, it should be the battles this 450 pack created. Mix in the two ingredients above—the thick (thiccc?) 450 pack and Ferrandis’ style—and you have epic motos throughout most of the summer. Examples are numerous—from Ferrandis and Sexton battling right to the checkers in the first moto of the season, to a fantastic Roczen/Ferrandis/Cianciarulo tilt in Colorado, to an even better fight between those three at High Point, where they literally battled three-wide at one point. Plessinger found himself in many a tilt like this, as well. Late in the going at Budds Creek, Roczen, Ferrandis, Tomac, and Sexton were chugging in a four-rider freight train. These 450 motos were routinely the stuff we all ask for, but all too rarely get.

Strength Versus Strength: Ferrandis had established himself as a late-race player. That, also, is the rep for three-time 450 National Motocross Champion Eli Tomac. It took Eli a few too many races to get it going this year, but once he did, we were treated to irresistible force versus immovable object wars to the checkers between he and Ferrandis. Eli held on during a RedBud nail biter where they both put in their best laps on the last lap. Later, Eli played the chaser to Ferrandis at Washougal, but beast mode was met with beast mode as Ferrandis held on. At Ironman, they were wheel-to-wheel in moto one for thirty minutes. Strength verses strength keeps it interesting to the end.

Veterans Days: Tomac and Roczen are now the establishment of the 450 class, with five of these 450MX crowns in total. They weren’t quite the 24-moto package Ferrandis was this year, but on days when they have it, they’ve still got it. Tomac logged a scintillating charge at Southwick, a mega-run at Washougal, and just absolutely ripped at Budds Creek and Ironman. When he’s hammering like that, it’s like watching fireworks go off, and everyone likes to see action at its most explosive.

As for Roczen, his talent lies in creating the technical masterpiece, and that’s exactly what his Unadilla 1-1 represented. No one was touching his work on that day, even his competitors could only watch.

The Duo: Jett versus Justin. Justin versus Jett. The points got away late in the game for Justin Cooper but the title tilt in the 250s swung back and forth most of the way. Jett was slightly better at the beginning, Justin better in the middle, and Jett again at the end. That’s the kind of unpredictability you love to see. Plus, there’s so much to unpack. What changed for Cooper late in the year, and in those second motos? How did Jett find more late in the season? This could be a career-defining title for either rider, and with the whole season so close, the pressure just ramped higher and higher.

Six Winners in Six Rounds: As soon as Jeremy Martin went out with injury at round two, and Jett and Justin had the first two overall wins, it appeared the script was set. Instead, a flurry of drama led to first-time winners, upsets, and shockers. Hunter Lawrence’s 1-1 at Southwick even gave him the look of a champion, but he couldn’t maintain it. Ultimately it took seven races for someone to win a second race, and by then it was actually Martin, who was still building himself back up from injury!

Pioneering Spirit: The Rockstar Husqvarna team delivered back-to-back wins at High Point and RedBud. Jalek Swoll’s High Point win was a shocker but also a massive boost for his own career. RJ Hampshire was on a tear as the fastest rider in the class for a few weeks, but he was also crash prone. He never gave up! The Husqvarna men added several more layers of intrigue to a summer that could have been a Jett and Justin show exclusively.

Martin Not Missing: Plus, Justin and Jett got to match wits with an all-timer of 250F racing. Martin’s list of injuries were too numerous to track, but he decided to keep racing instead of calling it, and his reward was three more career victories and the bonuses and respect that come with it. Plus, his speed in the second moto at Budds Creek and the first moto at Ironman were sights to behold. Best? His grit to banzai down Mount Martin with a broken wrist and deliver a 1-1- for the Millville hometown fans. Think of what we would have missed if Jeremy stayed on the couch all summer.

Jett Set: We knew the time would come when the motocross scene became Jett’s World, we just didn’t know when. It appears to be now. The donut trademark led to freebies at the track for his fans, and then sign jousting for his jerseys. He then hosted a Jettson Only Fans section at Fox Raceway at Pala. Jett’s popularity can only rise in relation to his results, and as the fan support grew, so did his seriousness as a consistent, steady title contender. If he holds on to win this title, we’ll remember the summer of ’21 as the time when potential became reality.

The Breakthroughs: The return to a hot, humid 24-moto slog after last year’s nine-round series through the fall reminded everyone how grueling the outdoors can be. Attrition became a theme as the 450 ranks thinned and that pack of 250 winners ran into issues, also. With that came a change in results, and more confidence and momentum for new stars. Coty Schock’s late rise made him everyone’s favorite rider, and behind him came a slew of 450 privateers logging career bests and scoring solid national points. In the 250s, riders like Jo Shimoda and Michael Mosiman didn’t get wins but showed the potential to do so many times in the future. The season had highs and lows, but remained entertaining throughout. Same time and same place, next year. Let’s hope it’s this good.