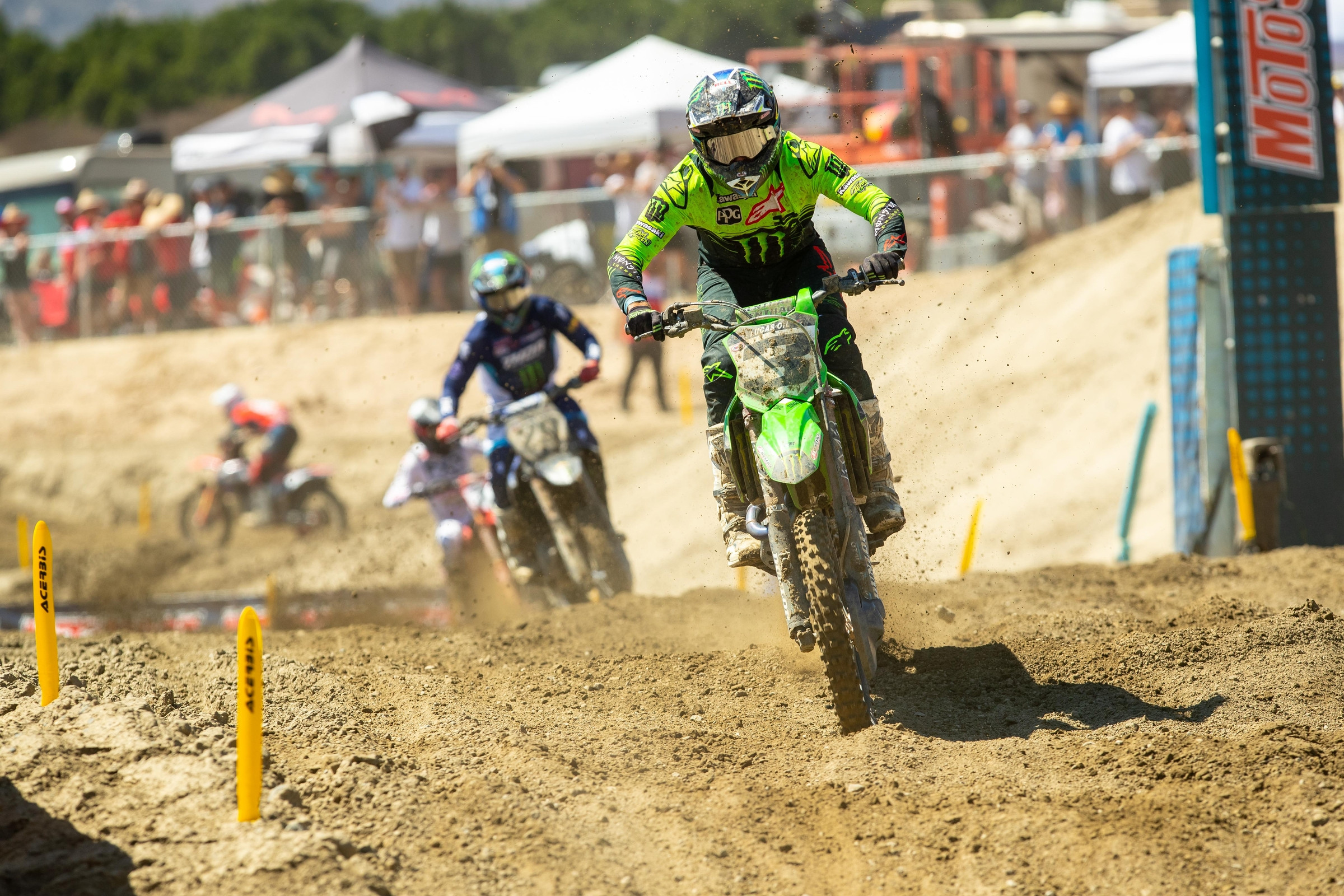 Let’s face it, Dylan Ferrandis, who’d been enjoying a substantial points lead for a good portion of the season, was never in a do-or-die situation all summer, but that doesn’t mean he wasn’t feeling the weight of the championship. Well, after wrapping up the 450 National Championship last Saturday, that pressure is gone, and it comes at a time when Eli Tomac, who will be racing his Kawasaki for the last time, really seems to be on a roll. If we’re lucky, we’ll see these two titans throw down and go head-to-head, pressure free, at the last race of the season. –Aaron Hansel

The championship belongs to Ferrandis, but that doesn’t mean Ken Roczen doesn’t have anything to race for. Right now, he holds a nine-point gap on Tomac, which could easily evaporate over the course of two sizzling motos at Hangtown. It doesn’t help Roczen that Tomac has been flying lately, and that Roczen hasn’t been 100 percent recently. Who will end up with the runner-up position when the checkers fly at Hangtown? –Hansel

Cooper Webb has been far better at the last few rounds than he was even just a month ago. It’s shown in his outright speed, and his results on paper have been much improved as well. He still hasn’t notched a win yet, however, thanks to racing against some pretty ridiculously speedy competitors. A win might seem just a little farfetched right now, but then again, podium finishes would have seemed out of the question just five or six races ago. If Webb’s going to make it happen in 2021, it’s going to have to be at Hangtown. –Hansel

It might be a little later than last season, but Justin Rodbell is starting to look like he’s regained the form that had everyone celebrating the Summer of Rodbell in 2020. He hit a season high at Fox Raceway too, going 12-11 for 11th overall. That’s his best result of the summer by far, and is better than every race of 2020, except for Loretta Lynn’s 2, where he was tenth. Look for Rodbell to close out 2021 strong this weekend. –Hansel

If you hadn’t been following the series, you’d probably be surprised to be told that just two rounds ago, Justin Cooper was the 250 National Championship leader. Thanks to a pair of subpar rounds, however, Cooper now faces a 23-point deficit to Jett Lawrence, who was impeccable at Fox Raceway last week. There are a million different ways this title can play out over the course of two motos, but even if Cooper goes 1-1 at Hangtown, Lawrence could still wrap things up with a 7-8. In other words, Cooper is going to have to excel, and hope something goes terribly wrong for Lawrence this weekend. Look for Lawrence to bring the 250 National Championship home for Honda at Hangtown. –Hansel

Cheering for the hometown rider is always fun, and this weekend the fans at Hangtown will have a couple of big names to scream for in the form of Max Vohland and Michael Mosiman, who are both originally from NorCal. Vohland’s had some great moments this summer, and Mosiman has even led laps. The hometown boost could conceivably bump them forward a spot or two, which might even result in a win for Mosiman. Keep an eye on the two of Hangtown’s biggest hometown heroes this weekend. –Hansel

Monster Energy/Pro Circuit Kawasaki’s Jo Shimoda has been slowly building his way to the front all year long. In Monster Energy Supercross, he snuck his first career win in right before the season ended at Salt Lake City 1. Now he has a chance to knock another first off, the week if he could either win a moto or go a step further than that and win his first career overall as well. He’s been right there the last couple of weeks, and a couple of good starts could put him in position to make it happen. –Kellen Brauer

We’ve had three rounds in a row of typical hot summer racing in Lucas Oil Pro Motocross coming into the finale. Budds Creek, Ironman, and Fox Raceway 2 preceded this weekend and all three were long, hot days in their own way. Hangtown will be slightly better than Fox Raceway this weekend with temperatures in the low-90s instead of pushing triple digits, but it’s still going to be hot. With riders wearing down from the season already, another hot day at the races may take a few guys fully out of their rhythm at the finale and open up the door for others. –Brauer

Christian Craig has benefit from some riders like Chase Sexton, Justin Barcia, Aaron Plessinger, and Marvin Musquin not lining up recently, but he was never far off from any of the aforementioned names anyway. So, last week, he went 5-4 for fifth overall and ran with the leaders seemingly all day. Craig has been building all summer as well with his results and had his best result of the 2020 season at the finale last year as well. If Craig could get a start tomorrow, he could battle with the leaders longer than you might think. –Brauer

The Hangtown Classic tomorrow will bookend the 2021 AMA Supercross and Motocross season. With a supercross season comprised of double- and triple-headers, long breaks in the Pro Motocross season, and 29 total races ran again, the year has felt long. But there is just one more race to go this year, and that will be it for the AMA contingent. Team USA isn’t going to the Motocross of Nations, there is no Monster Energy Cup or Red Bull Straight Rhythm; this is it. For riders who realize that and sense the light at the end of the tunnel, tomorrow’s race is their final opportunity to lay it all on the track before the offseason begins. It’s the last chance to impress potential suitors, show what they are made of, and end the season with a bang. –Brauer