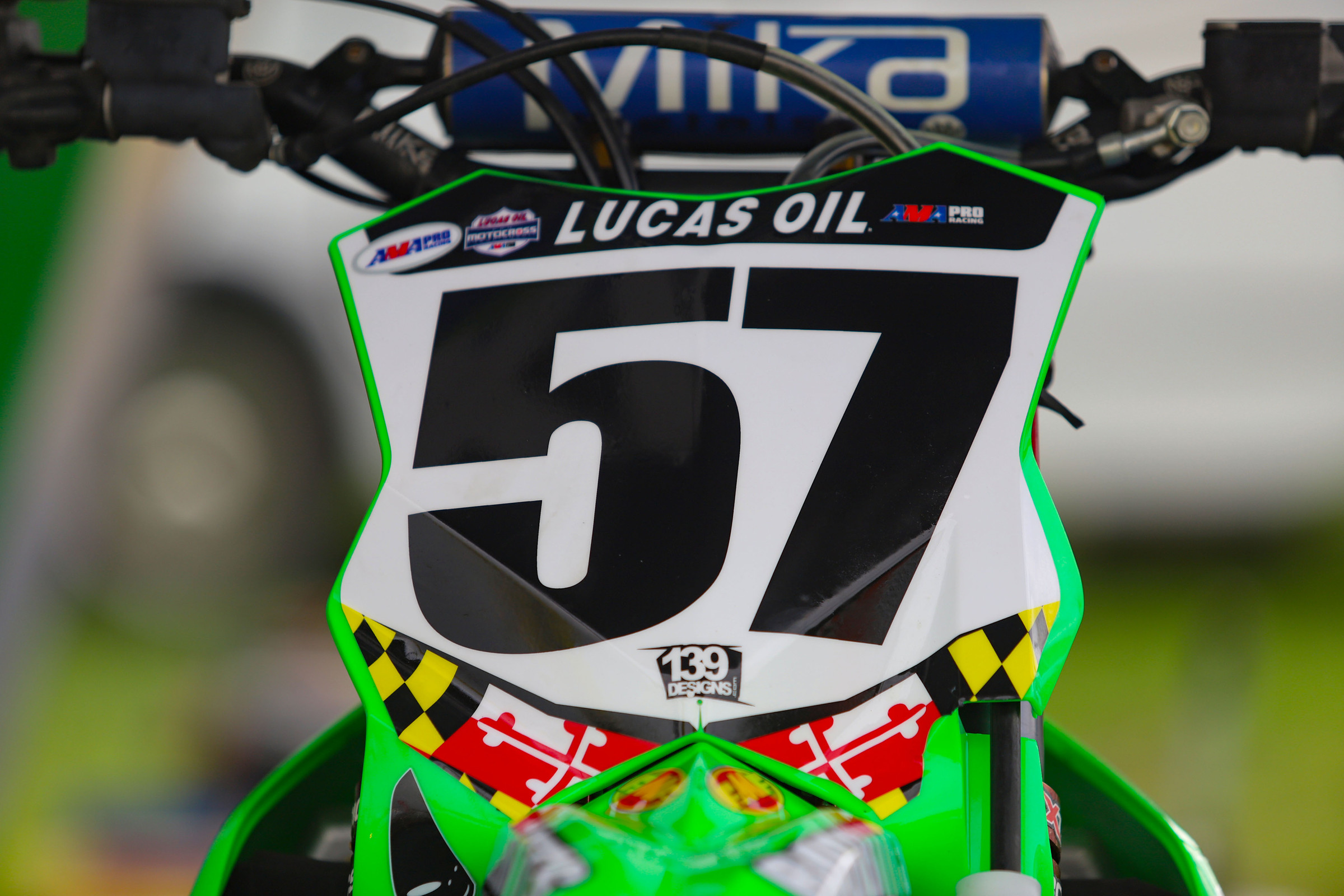 Hey, remember when Max Vohland was leading at Fox Raceway 1 National and looking good to win the first moto he ever raced, only to have his engine develop problems? At this point that moto seems like 100 years ago and Vohland hasn’t been able to replicate that speed since. But he sure looked good at Unadilla, where he went 6-5 for fifth overall. That’s a tremendous result for the rookie, and if it weren’t for his breakout ride at the season opener, it would probably stand out a lot more. He currently sits 11th in points, just one point back of Austin Forkner, and three points back of Michael Mosiman—who will not be racing this weekend due to injury. If he has another stellar day, he'll likely move up to ninth in the standings at Budds Creek. –Aaron Hansel

It doesn’t matter if you’re a Justin Cooper super fan, or if you’re a certified, sign-carrying member of Jett Lawrence’s donut legions—you can easily make persuasive arguments explaining why either rider is better this summer. So far this season neither rider has had a clear edge over the other, and just when it looks like one is going to take control of the series, the other comes roaring back. Just look at Unadilla, where Cooper dominated the first moto, only to finish fourth in the second and watch Lawrence take the overall with 2-1 moto scores! Cooper still leads the championship, but only by four points. Who will leave Budds Creek with the red plate? -Hansel

Early on the summer of 2021 was looking pretty good for Garrett Marchbanks. The ClubMX Yamaha rider had a career best sixth overall at Thunder Valley, and even finished just off the podium in a moto at High Point. Unfortunately, things haven’t been quite as rosy at the last few rounds, and Marchbanks, who had some bike problems, capped it off by going 40-16 for 18th overall at Unadilla. Marchbanks has four rounds left to return to form—let’s see if he starts bringing it back around this weekend. -Hansel

The only surprise about Coty Schock going 12-10 for tenth overall is that it’s the first time he’s been in the top ten this season. The FXR/Chaparral Honda Racing rider has been fast all season, but for various reasons, including chain problems in both motos at Spring Creek, just hasn’t put a pair of solid motos together until Unadilla. Is this a sign that Schock’s got things figured out? -Hansel

The good news for Ken Roczen? He was clearly the best rider at Unadilla, hands down, and thanks to 1-1 scores, took eight points out of Dylan Ferrandis’ championship lead. The bad news, at least for Roczen anyway, is he still trails Ferrandis by 39 points with just eight motos remaining in the 2021 Lucas Oil AMA Pro Motocross Championship. In other words, Roczen would need to put 4.875 points on Ferrandis per moto, just to tie him at season’s end. Considering how fast and consistent Ferrandis has been so far, and how mercurial Roczen can be at times, it seems like a tall order to fill. Then again, you never know in racing. Will Budds Creek prove to be a pivotal round in the 450 Class championship? -Hansel

Things haven’t been a complete disaster for Cooper Webb this summer, but you can bet he and the team expected he’d be a little better than he’s been so far. We’re eight rounds into this thing and Webb still hasn’t even been on the podium! But he was good at Unadilla, and although he definitely didn’t have the lead pace, he did have his best pair of moto finishes, 5-5. The scores actually netted him sixth overall, which is comically in line with how things have gone for Webb this summer, but if you’re Webb you’ve got to be happy to have had your best outing of the season. Is it a sign of things to come? -Hansel

Before Unadilla we wrote about how Marvin Musquin’s fourth overall at Washougal was his best result of the season, but that’s no longer the case—the Red Bull KTM rider improved on his season high by going 4-4 for third overall at Unadilla. You could try to explain it away by saying European riders tend to do well at Unadilla, but the fact that it’s his second fantastic ride in a row nullifies that argument (Note: Musquin has now earned eight total overall podiums at Unadilla MX—three in the 250 Class and five in the 450 Class). Musquin is starting to look more like the same Musquin who could threaten for wins on any given weekend. Will he at Budds Creek? -Hansel

Budds Creek Motocross Park has been a staple in the lives of some riders at the pro level, including Jarrett Frye, Justin Rodbell, Kyle Endriss (and the SGB team), and previously mentioned Schock. Frye grew up and lived only about 15 minutes from the track and used to ride it all the time. The Monster Energy/Star Yamaha Racing rider has not had the year he had wanted in terms of results, but he is hoping for a turn around while racing this familiar track for the first time as a pro. Rodbell, another Maryland native, grew up riding and racing here as well. The #57 was selling merch on Friday and said he had tons of support and is looking forward to racing tomorrow. The SGB Racing/Maxxis/Babbitt’s Kawasaki team itself is based out of Forest Hill, Maryland, (which is about two hours from the track) so they threw some MD love into their graphics this weekend. Kyle Endriss (filling in for an injured Alex Ray) said he grew up riding the track as well before moving away a few years ago. Needless to say, the entire SGB team and all the local boys will be getting cheers all day long! -Mitch Kendra

With more than a handful of riders in the top 20 in points in the 250 Class out with injury, several newcomers could benefit greatly. Last weened we saw both Seth Hammaker and Levi Kitchen running in the top ten—then the top five at one point—in just the second Pro Motocross start for both riders. Hammaker coming off the benches after dealing with an illness had solid two-thirds of both motos until crashes cost him late. Kitchen had to work through the field some more to get to where he was but in the second moto a top-five (gifted to him by a Hammaker crash) slipped away when he had a slip up of his own. Now Michael Mosiman, Colt Nichols, Stilez Robertson, Pierce Brown, Alex Martin are all out for this weekend, meaning the door is open for riders to make their way into the top ten. Kaeden Amerine, a Loretta Lynn's graduate making his pro debut on a #432 Yamaha YZ250F, and Suzuki teammates Dilan Schwartz and Preston Kilroy hope to continue to progress early in their careers. Watch for these newcomers to continue make their early mark early. -Kendra

The track received a ton of rain on Thursday and Friday, and it was expected to see some today. But when we arrived to the track this morning the skies were clear as the sun popped over the horizon. There was rain in the forecast last night but we might luck out and not receive it at all. This is great because mid-week a lot of people were anticipating a possible full-mudder, but it does not appear rain will even be a factor today. The only issue now is that if it doesn’t rain—or if it does some and stops—the temperature might rise into the low-90s. If the rain actually comes at some point and the track gets muddy, watch for those mud experts to shine. If the rain stays away and the temperature rises, those who trained hard during the off-season and maintained that peak condition will rise to the top. -Kendra